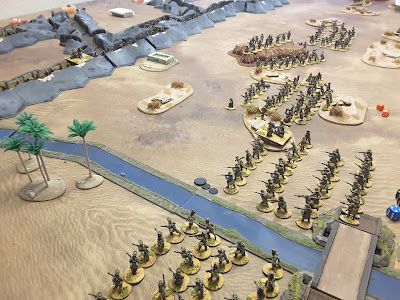 A few weeks ago I set up the Battle of Sheikh Sa'ad with a post on the back ground of the fight along with some details on how we planned to refight the action. The actual battle took place over two days, on the second the numbers were virtually equal so my scenario is designed to reflect the action on the first day when the British and Empire Forces had a reasonable chance of success.

The dip in numbers visiting the site when I post about WW1 Mesopotamia is massive, these posts get a third of the traffic a similar WW2 or Napoleonic post would attract. Which is a real shame as this area of conflict is so much more interesting than the Western Front. Please see the link below for the previous post. 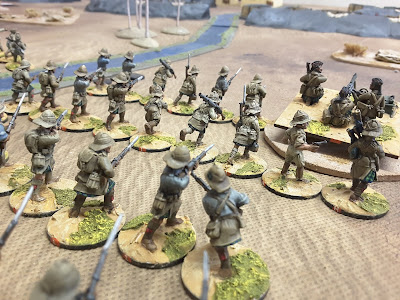 As with previous AARs I will let the pictures do the talking, above we see the Highlanders moving off from their start positions toward the as yet unseen Turkish lines. Figures 28mm, table 12 x 6, rules If the Lord Spares Us by toofatlardies. Indian Troops advance forward and start to come under fire from Turkish Artillery and Machine guns, the small black marker representing one point of suppression. 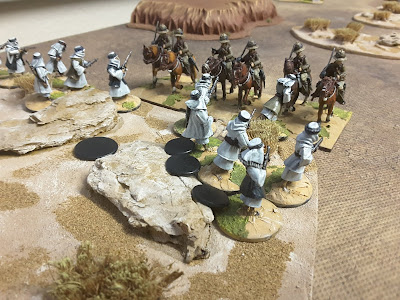 The first proper action happened on the far right of the British Lines as the British Cavalry pushed forward towards the Marsh Arabs who had decamelled (got off) and were furtively skulking around a patch of rough ground, no doubt up to no good.

It led to our first ever WW1 Cavalry charge, onwards the Cheshire Yeomanry ! 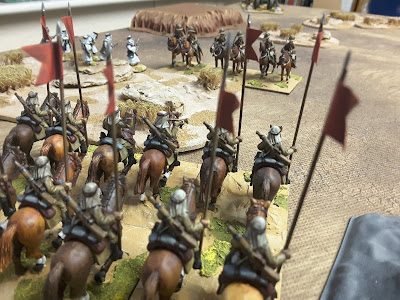 The irregular Arabs were no match for the Cheshiremen and were wiped out in the attack, the British Cavalry held the ground after the melee but the unit of Turkish Lancers were looking very interested in the smaller British squadron. 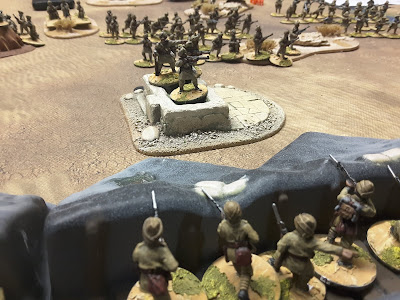 Meanwhile one of the Indian Battalions in the middle of the table had pushed forward to within close range of the Turkish trenches, the Turkish figures were placed on the table and the combat began in earnest. 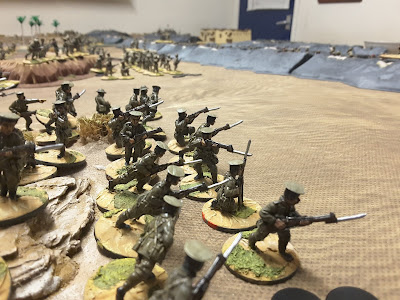 Attacking trenches is never easy and it's even worse when there is no cover. 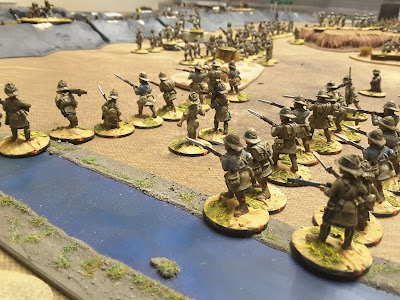 The Highlanders are plodding on steadily but they are a move behind their Indian Allies. 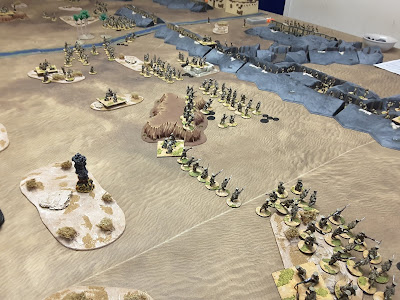 What looks like a lot of figures at the start begins to thin out, the Buffs, closest to the camera are already a long way behind the main attack. 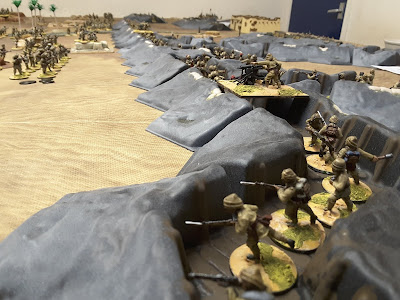 There is no subtlety in the centre as the Turkish defenders fire everything they can at the attacking Empire Force. 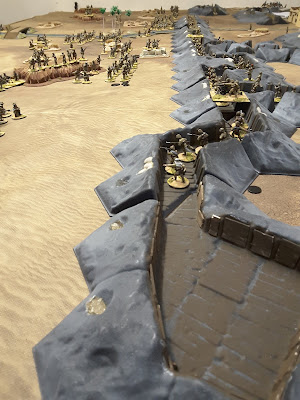 Hopefully no one will notice the hole in the Turkish defences. 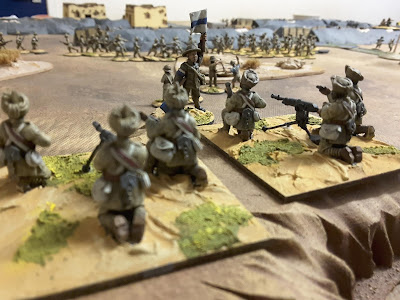 On the left bank the Indian Troops had set up a pair of Machine Guns to support the attack. 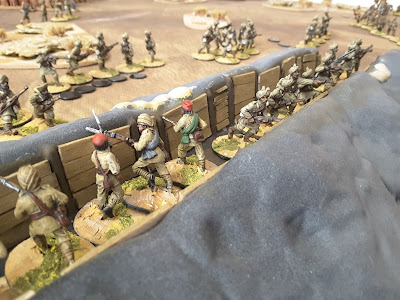 Missed a few photos actually playing the game, but the MG support helped the 56th Punjabi Regt get a foothold in the front trench on the Empire left bank, but the Punjabis and supporting Sikh unit have taken some damage on the way in. 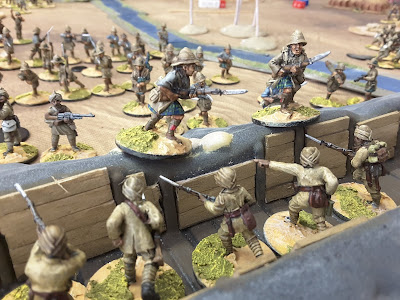 In the centre the Highlanders make their bid for the trench. 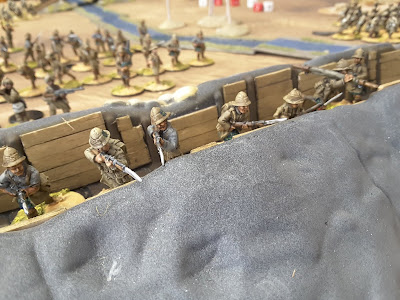 It's a tough battle but the Scots are in the trench line. 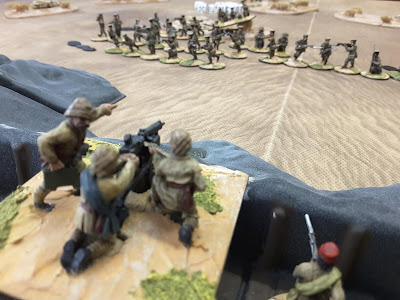 Further down the line the Buffs are still under heavy fire and struggling to advance. 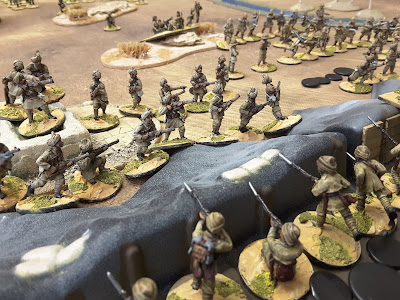 As the Highlander attack goes in the Dogras try their luck in the centre only to be shot off by the Turkish defenders. 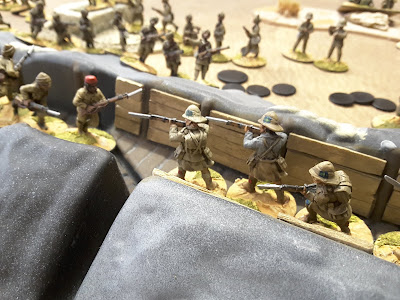 But the Highlanders in the front line trenches didn't hàve it easy, both sides threw company after company of troops into the fray and casualties where high on both sides. 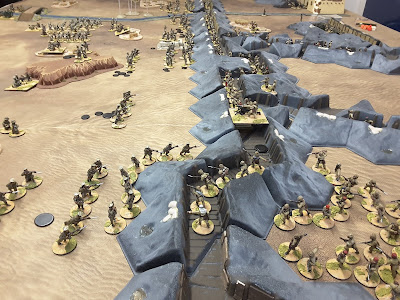 A general view down the trench line, in the foreground the Buffs have closed on the Turkish positions but they have plenty of suppression and are unsupported on their flanks. A Turkish reserve Battalion is approaching the lines to make things worse for them. 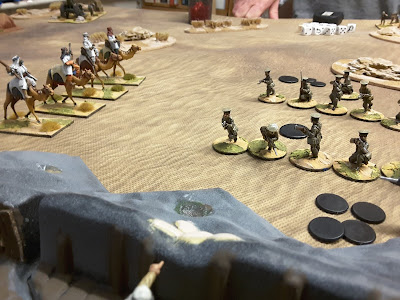 But that open flank was going to be a bit of a problem, whilst they were concentrating on the lines ahead the Marsh Arabs have reupped and are snorting towards the suppressed Brits. 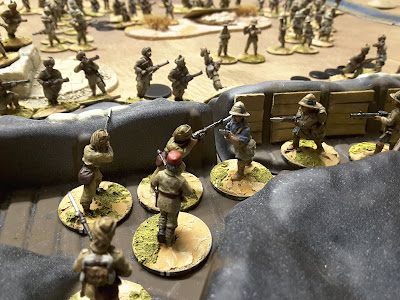 Meanwhile the fight between the Highlanders and the Turkish Infantry goes on... 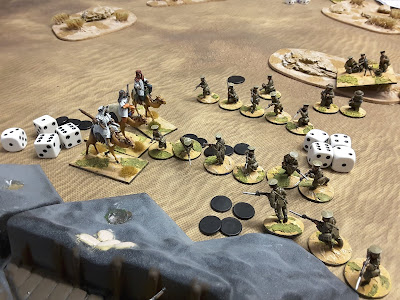 Oh Matron, I've been cameled in the flank  ! 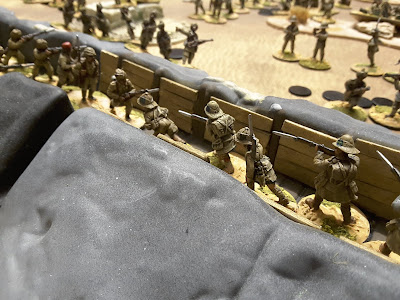 Still fighting in the trenches. 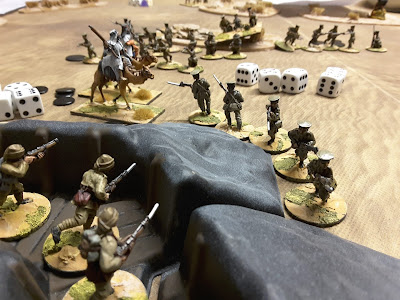 And a second company of Buffs get the hump ! 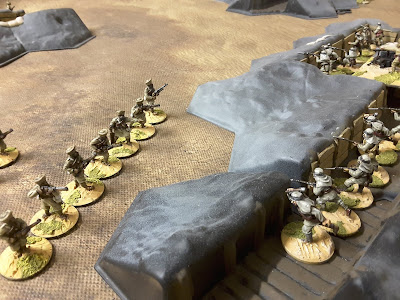 I realise that I don't have many photos of the fight on the Empire left, the units on that side of the table managed to capture the front line trenches with some heavy casualties, but they were brought to a halt by a fresh Turkish Battalion in the second line supported by Machine Guns and Artillery. 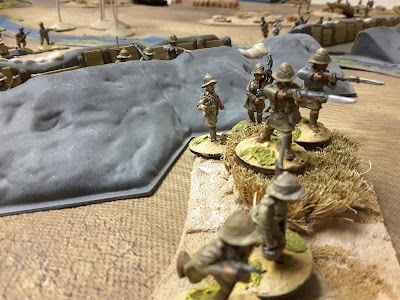 In the centre the Highlanders broke through the lines with their last company, casualties were very high on bothe sides. The attack on the Empire right had stalled with the Buffs unable to advance. 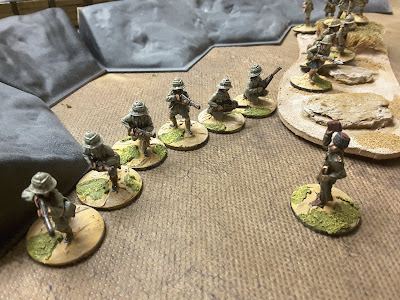 The Turkish Commander in a spot of bother.

We had set a time limit for the game (2 of our very lazy game days) representing the first day of the Battle. The Empire troops had done slightly better than in real life having gained foothold in trenches on both sides of the river.

In the actual battle the Empire forces withdrew from the Trenches over night and attacked again the next day, attacking in fog the Empire left broke through the Turkish defences forcing the troops on the other bank to retire also.

Losses were high for the Empire, over 4000 (around 1/3 of the troops engaged), the Turks lost 1200, very illustrative of the danger of attacking in WW1.

That's the Mesopotamia collection away again for the year, see you in 2021 for the Battle of the Wadi.
Posted by Yarkshire Gamer at 11:03:00