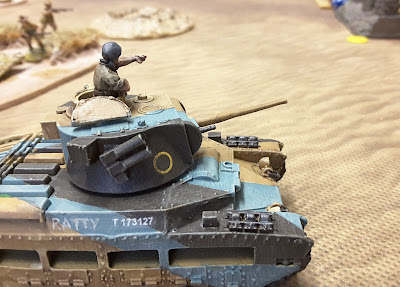 Lumbering Matildas slowly crossing the Desert whilst sand swirls around the troops as they advance into the unknown, would adequately describe Game 7 of our ongoing Op Compass Campaign and what follows is the Scenario and AAR.

The games are based on an excellent book by Robert Avery which is available from The Toofatlardies, there is a direct link to purchase the book on the Resource Page.We use 28mm figures with this scenario taking place on an 8 x 6 table using a home brew set of rules, based on Iron Ivans Disposable Hero's.

Its the 10th December 1940, the previous day (see our recent games) the Italian Forts at Tummar fell, the British Forces moved onto the Sidi Barrani position. Part of the force was detailed to take a small hamlet known as Alam el Dab.

The weather was appalling, a high wind whipping up sand and dust into a constantly changing fog / sandstorm, visibility rapidly changing minute by minute. As the British advanced the cloud of dust lifted long enough for the Italian Artillery to destroy the approaching lorries, the British Infantry helpless, only able to watch as their lift home disappeared.


As quick as the visibility increased it dropped back to nothing, the British troops now supported by their old friends the Matildas of 7RTR swept forward into a cloud of dust towards where they believed the Italians to be.

This battle is fought over an 8 x 6 table. The game begins with the Italian positions hidden.


You should just be able to see on the table a series of yellow dots, these are dividing up the table into 24 equal squares to help with plotting positions and artillery. The terrain is random scrub and rocky outcrops with a single building representing the position of Alam el Dab.

The following Special Rules are in force (see Resource Page for full details),

New Rule - Variable Visibility - to represent the fluidity of the distance troops could see in this battle Visibility is limited to 9" plus 1d10 inches. Visiblity is determined once at the start of a new turn and again on the turn of an event card, giving a maximum of 3 and a minimum of 1 change in Visibility per turn. Whilst in force all firing is considered to be at long range.

Spoiler - The Brits have a secret objective, the game ends when they take all three gun positions, the British players should not know this until the game ends. 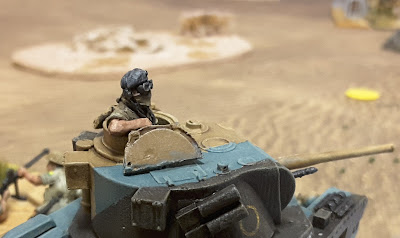 Italian Artillery has once again proven it's worth, take you troops into the mist and capture their positions. Be careful, the sand is soft, our tanks break down and visibility can change at any time.

Best suited for 3 players. Each Task Force has the following,

So 3 tanks and 111 men to get the job done. One TF will start in the centre of the table whilst the others will start equidistant from the centre tank and the table edge.

Once again you find yourself trapped in a difficult position with the seemingly unstoppable Matildas heading towards you. This time you have the advantage of cover and limited Visiblity, hold on as long as you can and cause as much casualties to the attackers as you can. Defend your guns to the last. 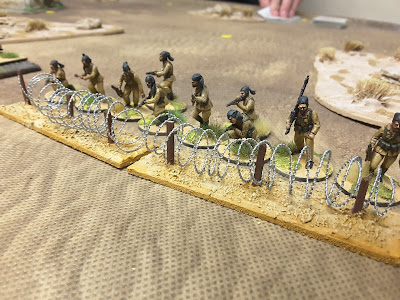 Your forces consist of, 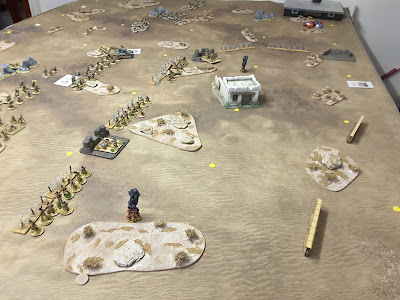 The above photo shows the layout of the Italian positions, only place the terrain and troops on table once they are visible, the Italian player chooses where in the line their three gun pits go.

The position was a series of fox holes rather than a formal trench system hence the use of barbed wire. The Italian positions are static and could easily be played by an umpire or as a solo game.

Italian Artillery can fire over open sights at any target they can see, if they have no target they will fire at random. Dice for one of the 12 squares on the British side of the table, take the centre of that square as the aim point and then randomly deviate by 2 x d10 inches, reroll for each gun.


How did we get on

Once again a good time was had by all, these scenarios really throw up some interesting match ups and with the randomness of the rules players are definitely kept on their toes. The Visablity  rule worked really well and we all got the feel of a swirling sandstorm with targets frustratingly appearing and disappearing usually at the most inappropriate moment.


Round 1 went to the Italians without an initial shot being fired, "Hedgehog" one of the three Matildas broke down the first time it tried to move, the random roll produced an unfixable fault and that was it. Next turn the Italian Artillery landed a 100mm shell on the engine deck just to make sure. 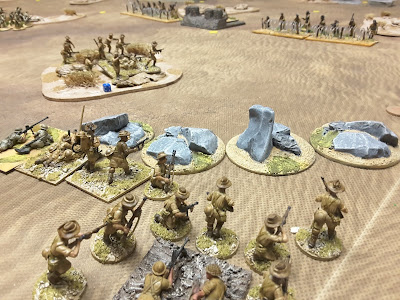 The game settled down into a now you see it now you don't gun fight with the variable Visibility, the Brits taking quite a few casualties from the Italians in their fox holes and the randomly landing Artillery. 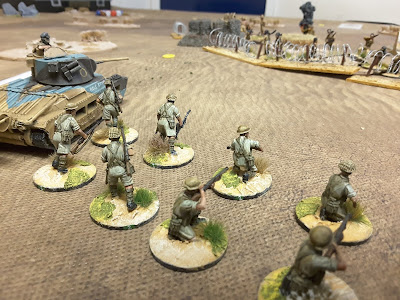 Things were going well until the tank Gremlin struck again, this time it was Mole in the centre of the attack, who broke down, it was fixable but with Italian small arms easily in range no one was getting out to fix it ! With the Artillery falling else where Mole quickly became a Pillbox, if only it had an AP round. 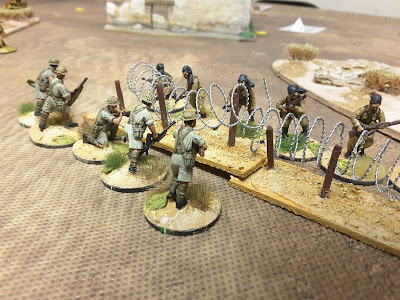 With the tank stalled, the British went headlong with fixed bayonets into the Italian positions. The Blackshirts held firm and held their fox holes, just. 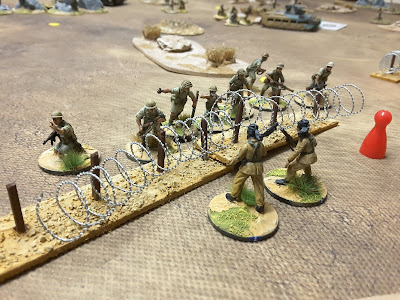 But the fight drastically reduced the numbers of the defenders and next turn a fresh wave of British troops took the position. 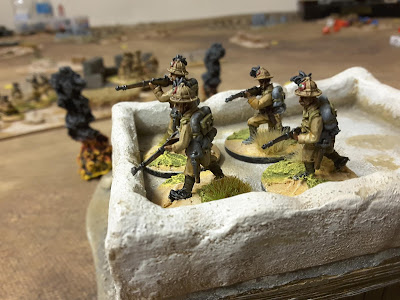 The elation was short lived as the extra move forward revealed more Italians in the Hamlet. 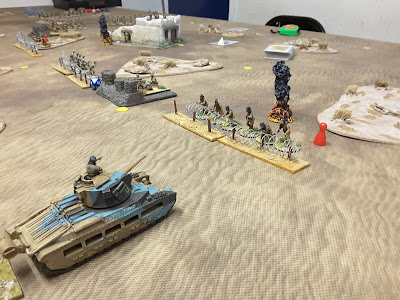 On the British right the last mobile Matilda "Ratty" kept it's slow but seemingly unstoppable crawl towards the wire in front of it, rifles and LMG fire isn't much use against an Infantry Tank. 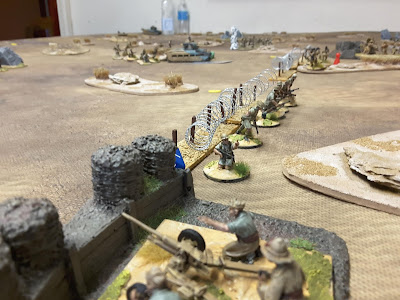 The Brits in the wire wisely decided to move away from the Hamlet and charged one of the Italian Gun positions, it fell but not without a fight. 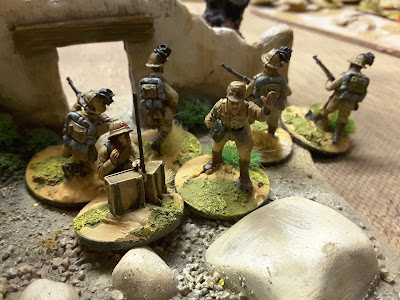 The Italian Commander was busy on the radio, but no help came. 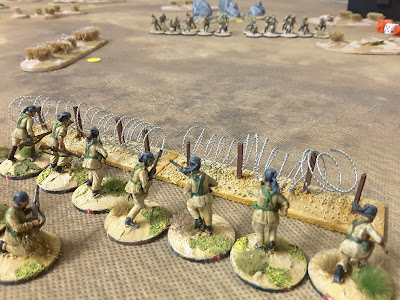 On the British left the tankless ("Hedgehog" smoking in the background) company had been wandering around blind for some time, the sandstorm preventing it from seeing anything of value, gradually the advance revealed that the Italian positions were not a straight line and the units moved to engage the flank positions. 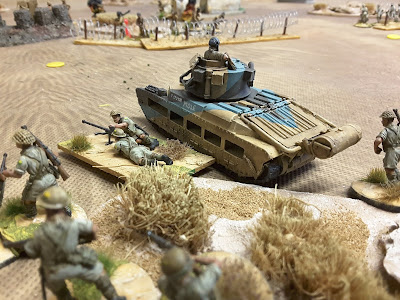 The game built up to a nice close, the British had broken into the Italian positions in one location and a couple of others were holding on, however they had taken some pretty heavy casualties, three units had already been wiped out and it was touch and go if there was enough men left to do the job. 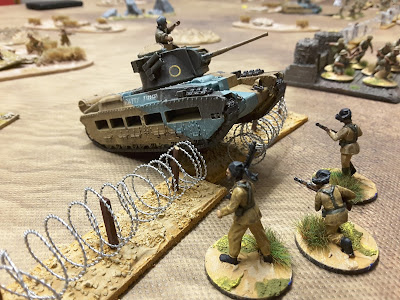 Everything came to a head in the final turns, on the right "Ratty" rolled over one of the Italian positions and with the gun position next to it taken that side of the table was taken. 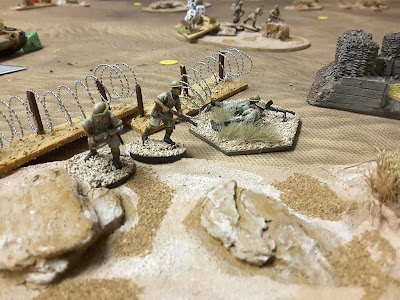 In the centre there was another bayonet charge and again the first unit was wiped out at the wire whilst the remnants of the second one taking the position. 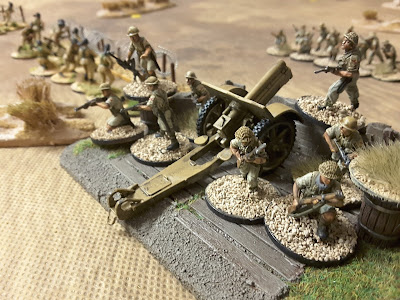 Whilst on the flank the British managed to roll over the 100mm Field Gun with hardly a shot fired. 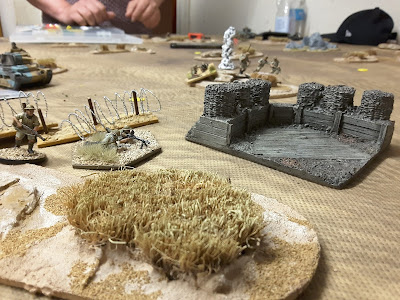 The game ended when the Pillbox, sorry Matilda in the middle finished off the final Italian Gun and the British objective was complete, but not without considerable losses which were pushing 50% at game end.

So points wise I am going to give the Italians one (for the High casualties) and 3 to the British giving a Campaign Total of 18 to 10 in favour of the Brits. 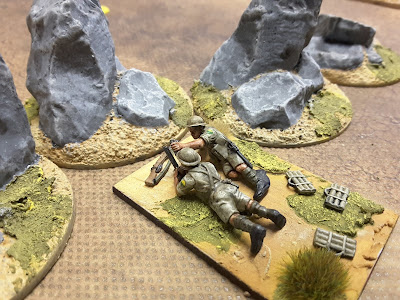 Game 8 will be up soon, next time after a few games relying on the strength of the Matildas the British are back in the flimsy early Cruiser Tanks. But before then we will be playing on the fields of Edgehill and the Italian Wars Project will see the light of day again.
Posted by Yarkshire Gamer at 05:38:00 13 comments: