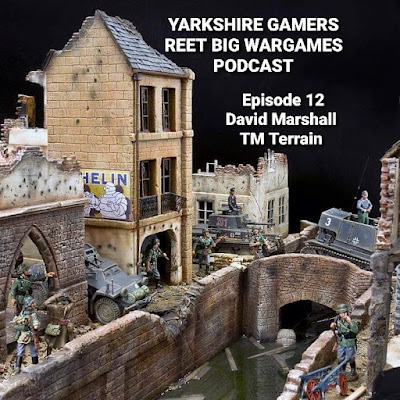 This episode sees us return to Gods Own County after a trip round the world in the last episodes.

Todays guest is David Marshall who runs the company TM Terrain. He is an outstanding terrain maker and very kindly gave up his time to chat about how he got interested in the terrain aspect of our hobby as well as talking about his techniques and methods. The usual embedded player isn't working this week so here is a direct link to the episode.

We had a cheeky idea to visit Games Workshop, buy the smallest thing in the store and then when asked what we were into, we would reply with the most obscure army we could think of, surely a game all the family could play. 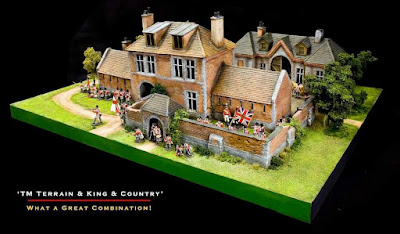 David is most famous for working with the Perrys to produce the awe inspiring Agincourt Display which is now in the Royal Armouries here in Leeds and we of course chat about how that amazing piece of work came about. 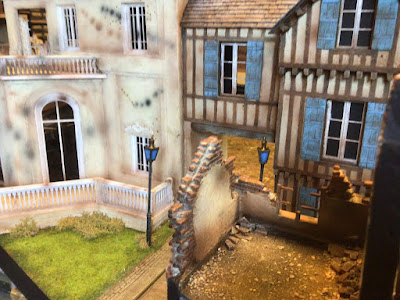 I've failed again to come in under two hours, David had more than one question for me at the end of the show and we ended up talking Big Games for a bit longer, whats wrong with that ! 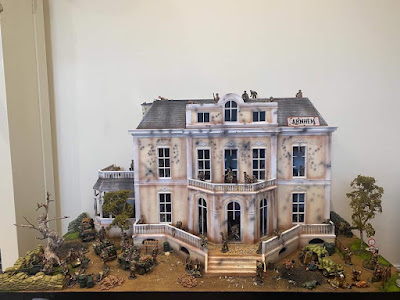 Thanks again for listening, I hope you enjoy.

And just in case you missed it Episode 11 with Stephen Wold is available on the Utubes below. 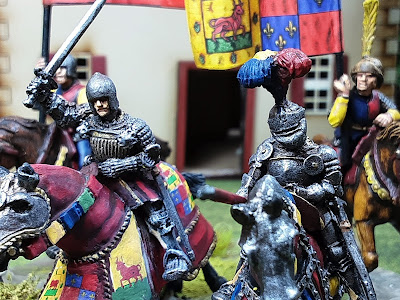 Command Bases have always been a bit of a last minute thing with me and I have quite often found myself drastically looking round for more when I'm settling games up and never seem to have enough, Ive been known to raid the 7YW box for Generals prior to a Napoleonic Game and vice versa.

With my Italian Wars collection I decided early on to make sure I added them as the Army built and to be fair I have kept that going. With specific battles in mind I decided to add to the existing Command Bases with some specifically named ones as Army Commanders, so here are my efforts. 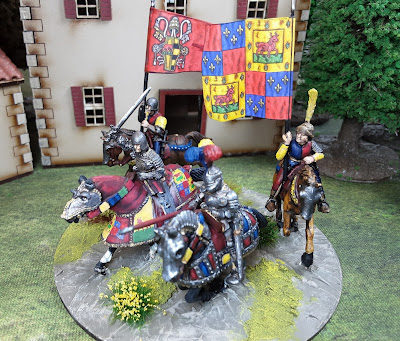 Who doesn't love a bit of Borgia ! Made famous through their depictions in print and on film over the years, the intrigue and plotting associated with the family is now legendary and simply a must when building an Italian Wars army. 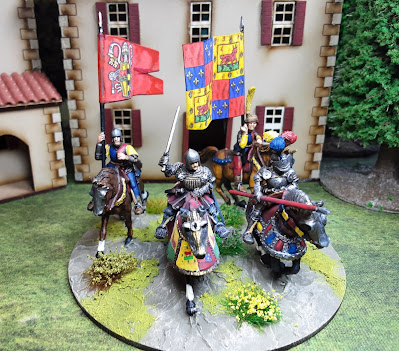 So here is my depiction of the man, a 100mm Diameter MDF base with 4 mounted figures. Cesare himself is a metal Steel Fist Gendarme with a Perry head swap. I chose the horse for the number of large flat areas on which to add livery. 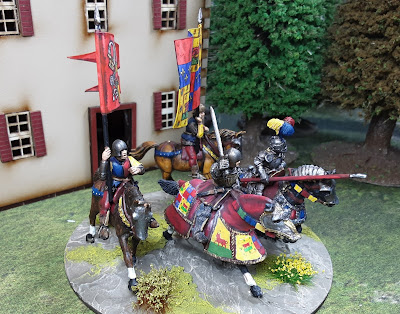 The helmet on Cesare is based on one that I saw on a large scale model of the man in Italy although I am more convinced that the open faced aspect of the head protection is more of a "Hollywood" thing, but I like the look and as this will be my personal Command Base for our games I'm sticking with it 👍 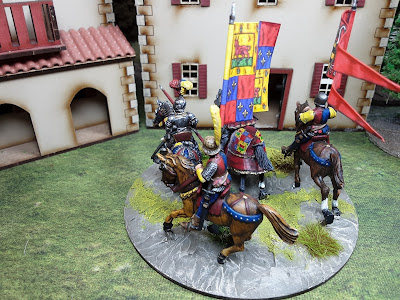 The livery is all my interpretation based on the colours in the flags and I have used Borgia crests to make my own decals for use on Cesares horse. Next to the main man is another Steel Fist Gendarme painted in the same colour scheme. 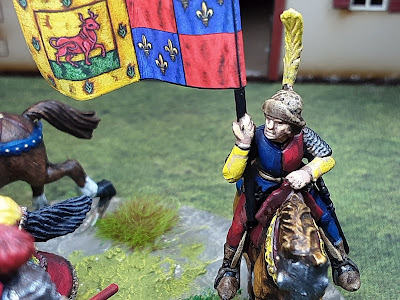 Behind those two figures are two plastic Perrys Light Cavalry figures, both in my Borgia colour scheme, the first carrying the personal colours of Cesare as the Duke of Valentinois, the other carrying a Papal Borgia flag, most appropriate as Cesares father Pope Alexander VI paid for most of his military adventures. Flags by Petes Flags. 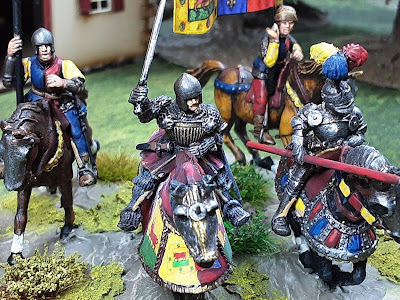 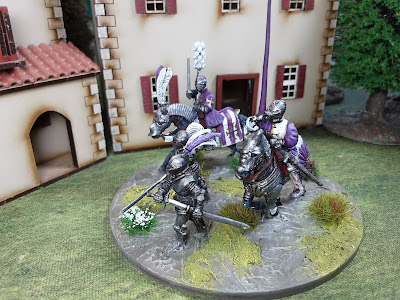 Next up is the King of France as he was at the Battle of Fornovo, minus a flag as I'm hoping Petes Flags have one in the pipeline.

Same 100mm Diameter MDF base with 4 Steel Fist Miniatures and based on the front cover illustration of the Helion book about the battle. 2 figs mounted, the King and his Standard (less) Bearer and two on foot. 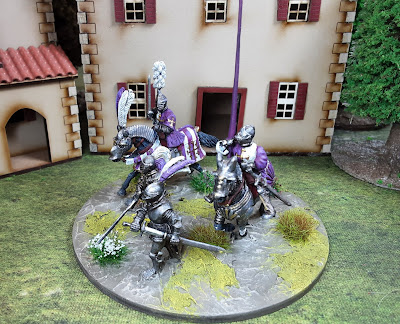 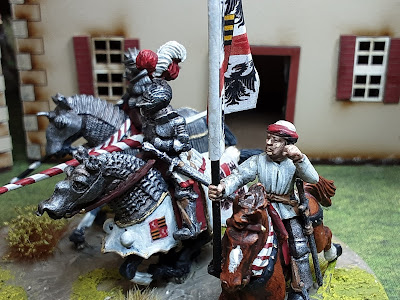 The next base represents the othe army Commander at Fornovo, Francesco Gonzaga. Darrell Hindley did a superb base for this lad with the figures emerging from a river. I didn't even attempt to complete with that and just went for a straight up 3 figure base (100mm). 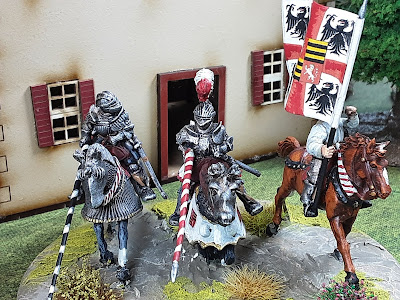 I have seen some speculation that this is not the correct flag for Gonzaga at Fornovo but in true Yarkshire Gamer style I've ignored that and just used it. I've also used the flag to make decals for the carparison. 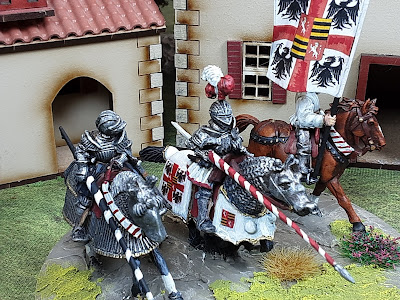 The flag is home printed. A pretty simple paint job on these, I think my eyes had gone doing the Borgia base ! 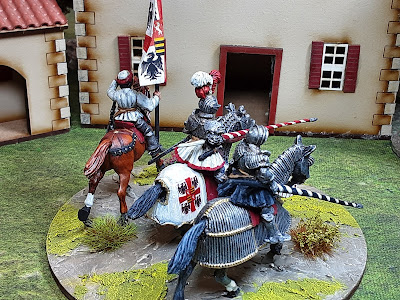 To finish off I had enough spare figures left from the recent uplift in Light Cavalry to do a generic un named general on a smaller 80mm base. 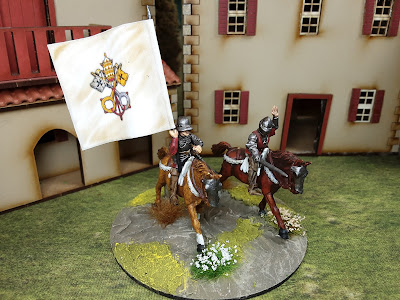 A nice simple paint job with a Papal Flag, perfect for a big standard General for my Army. 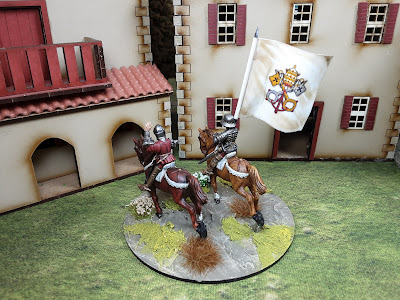 Hope you've enjoyed that little run down on the new Command Bases, I've got a big batch of Stradioti and Light Cavalry coming up next.
Posted by Yarkshire Gamer at 07:56:00 18 comments: