Rather than just put up a new page when I finished the next box of figs, I thought for a change on this blog I'd do a beginning to end blog, showing the figs going from the box to the table. All paints are Vallejo Model Color unless stated. 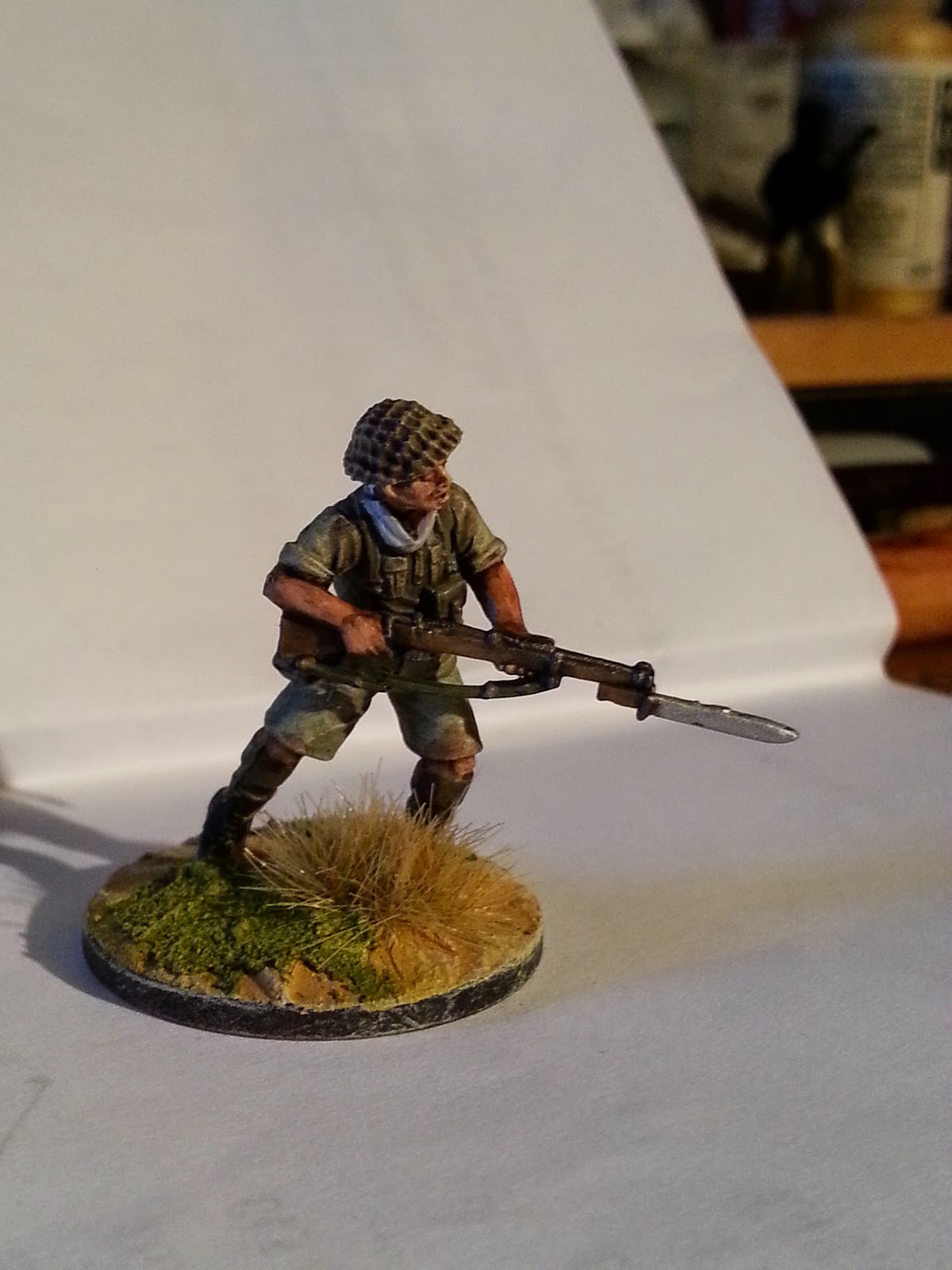 1 down 37 to go. The Lifecolor paints are quite hard to get hold of here in the UK, luckily I saw some in a model shop in Italy when on holiday, cue strange looks as I bought all 6 bottles in the shop. I use Humbrol Matt Cote as a varnish, its oil based and much harder than acrylic varnishes, dry clear and dull, good stuff. Hope you have enjoyed this little trip into the paint room.
Posted by Yarkshire Gamer at 11:41:00 No comments:

Empire of the Dead - Organ Donors 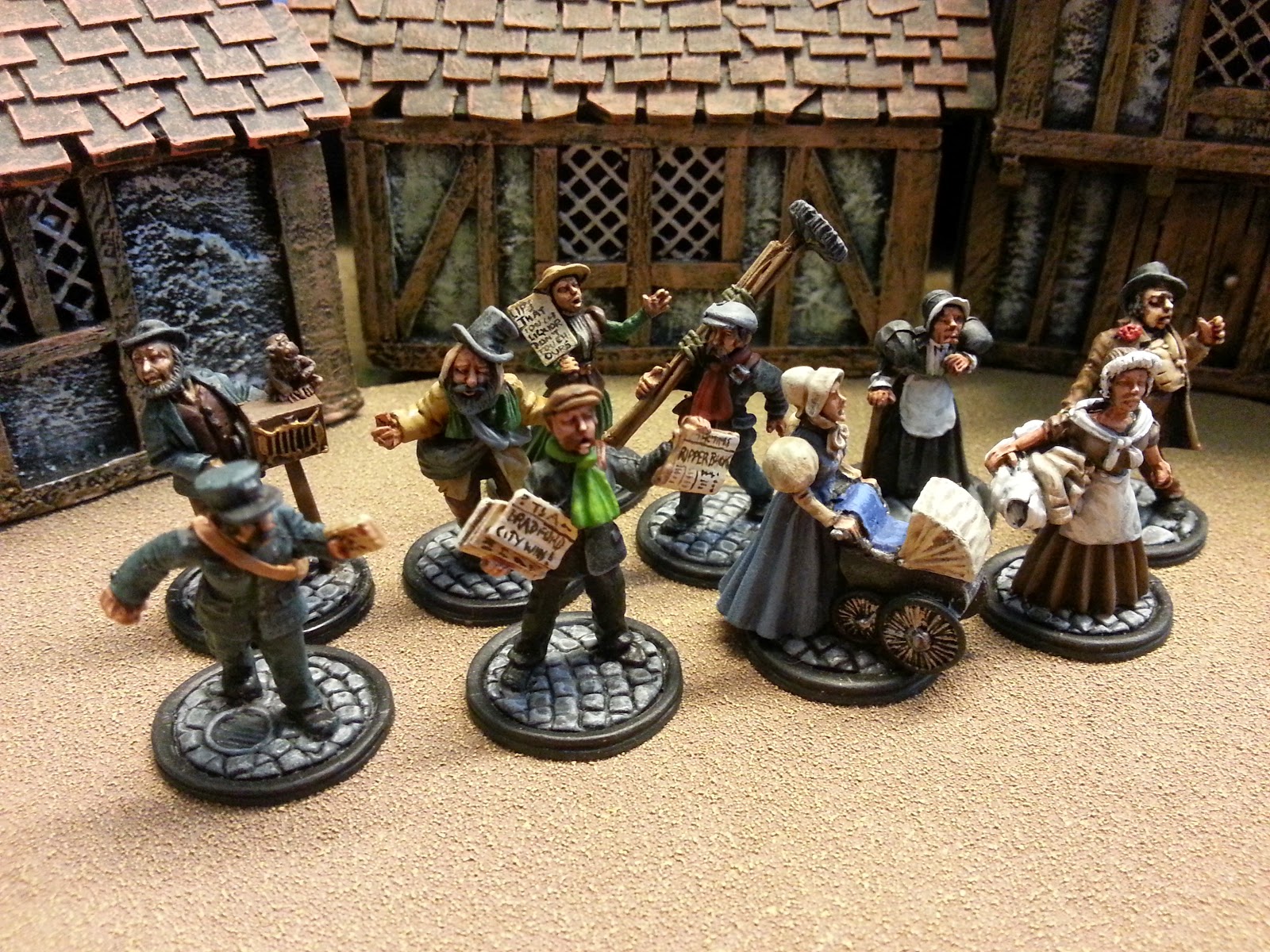 Regular readers will know that over recent months I've been wandering off into the unknown with a bit of Steampunk stylee EotD. I'm slowly building up the figs for the introductory scenario with The Ripper vs Holmes and Watson. Having been gaming for 35 years or so this is the first time I have painted figures one at a time and its a bit weird to say the least. 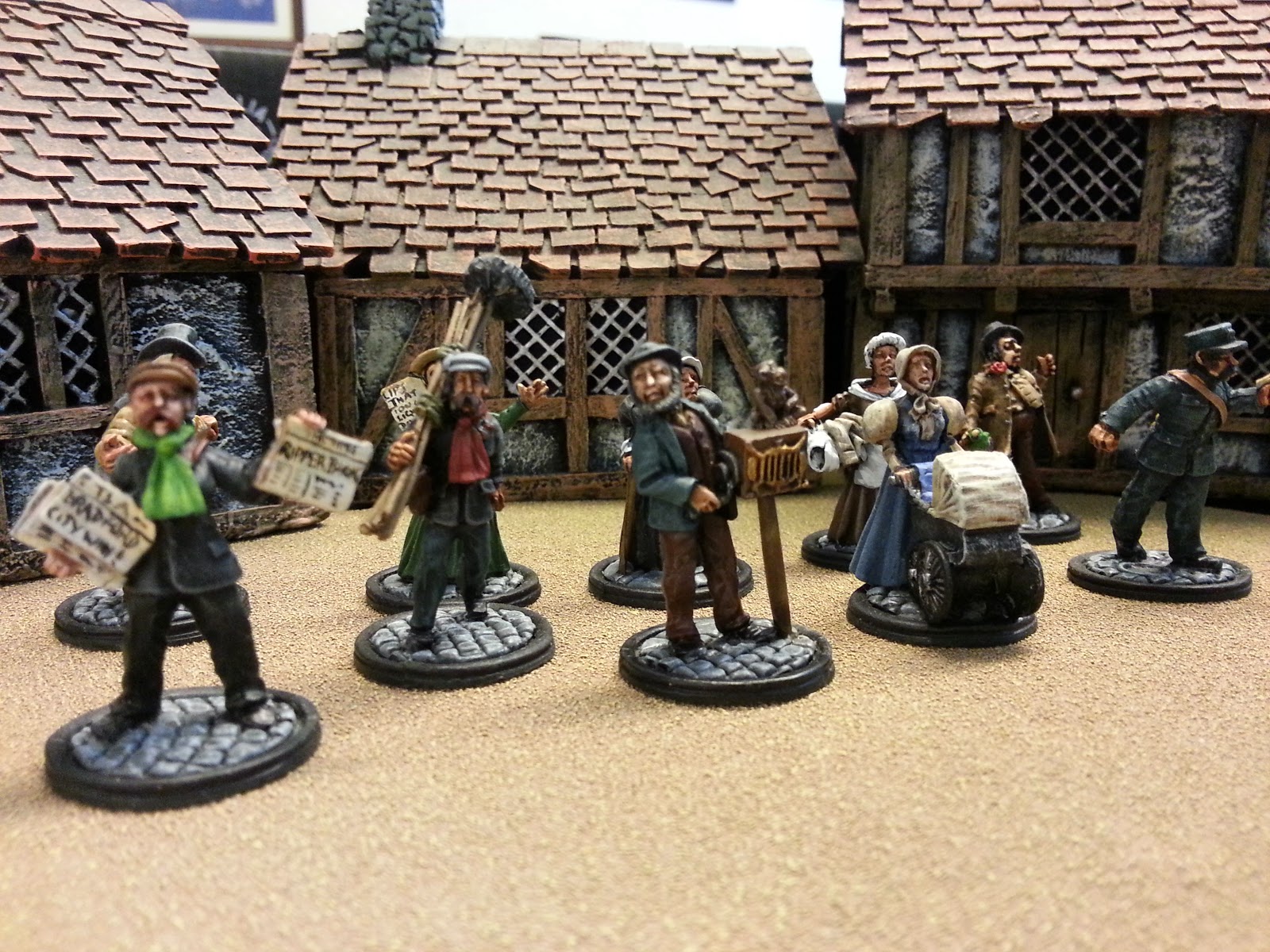 I got these figures from Old Glory In their Blue Moon 28mm range found here , quite good value for "fantasy" figures at £30 for 20 figures. I have found these considerably better than the usual Old Glory fare who in my experience have often suffered with poor quality metal and bad castings from worn moulds, therefore I was pleasantly surprised at how little cleaning up they needed.

These 10 figs will act as victims in the first scenario, their organs earmarked for harvesting by the Ripper, although he might give the drunks liver a miss. There are 10 more to paint in the box.

Well we finally got our Naval Campaign finished this week, shifts have meant a change to game time as Sundays have proved a bit tough to organise, so we have chucked a couple of cheeky Thursday evenings in.

This the final phase of the Campaign sees reinforcements to both sides, the Japanese Convoy has arrived on table, a mix of 12 merchants and troop carriers escorted by the light cruiser Sendai and 10 destroyers.

Added to that was the survivors of the previous games, 3 of the Japanese Heavy Cruisers were looking a bit weary. 2 had already lost their range finders and were on half hits maximum, the other was a bit leaky.

British hopes were raised with the arrival of 2 Heavy and 1 Light Cruiser with 6 escorting destroyers. Of the other ships Repulse was down on speed after a torpedo hit in the last game and one destroyer had limited ammo.

First choice was to determine when the game took place, I let the players decide, if both sides went for day or night it was easy, half each would have led to a day night game however both went for the daylight option with limited air power (3d6 a turn a 6 bringing flight of 6 aircraft on table).

Things were gradually going the way of the Brits initially, the extra power of Prince of Wales taking its toll on the Japanese Battle cruisers Kongo and Hiei. The Japanese where just about to throw the towel in when Repulse got hit in the bridge, a d10 was rolled, the result the loss of the ships Captain and an immediate withdraw order. That made it a bit more interesting.

The Brits made a limited attack with three destroyers however the Japanese had separated Sendai and 6 destroyers who met them before they could launch torpedoes at the convoy.

All three British Destroyers were sunk, Vanity ended up with a Rudder jammed hard left leaving it going round in circles, this lead to a collision with 2 Japanese Destroyers sinking the Vanity and a Japanese ship. Kashmir exploded from a magazine hit the blast taking out the already badly damaged Lance.


With the losses over the turn the Brits didn't have enough to press an attack on the convoy, PoW was getting isolated and Repulse was limping off the table. The withdraw was ordered, smoke deployed and the Brits steamed away. The Japanese Navy had taken a bit of a beating, one Battle cruiser sunk, 1 sunk and 4 badly damaged Heavy Cruisers (one with only 10 points if damage left from 1500) and 4 sunk Destroyers however the convoy was intact. Brits had a badly damaged Aircraft Carrier and Battle cruiser and losses of 2 light cruiser and 6 Destroyers.

A good balanced campaign which seemed to work well, nicely balanced both sides had chances for a knock out blow, everyone who played seem to enjoy the games as well even though Naval isn't their usual bag. Load up the khaki shorts and the Desert Wellies as the WW2 stuff gets its first outing in 2 weeks time.
Posted by Yarkshire Gamer at 14:33:00 No comments: 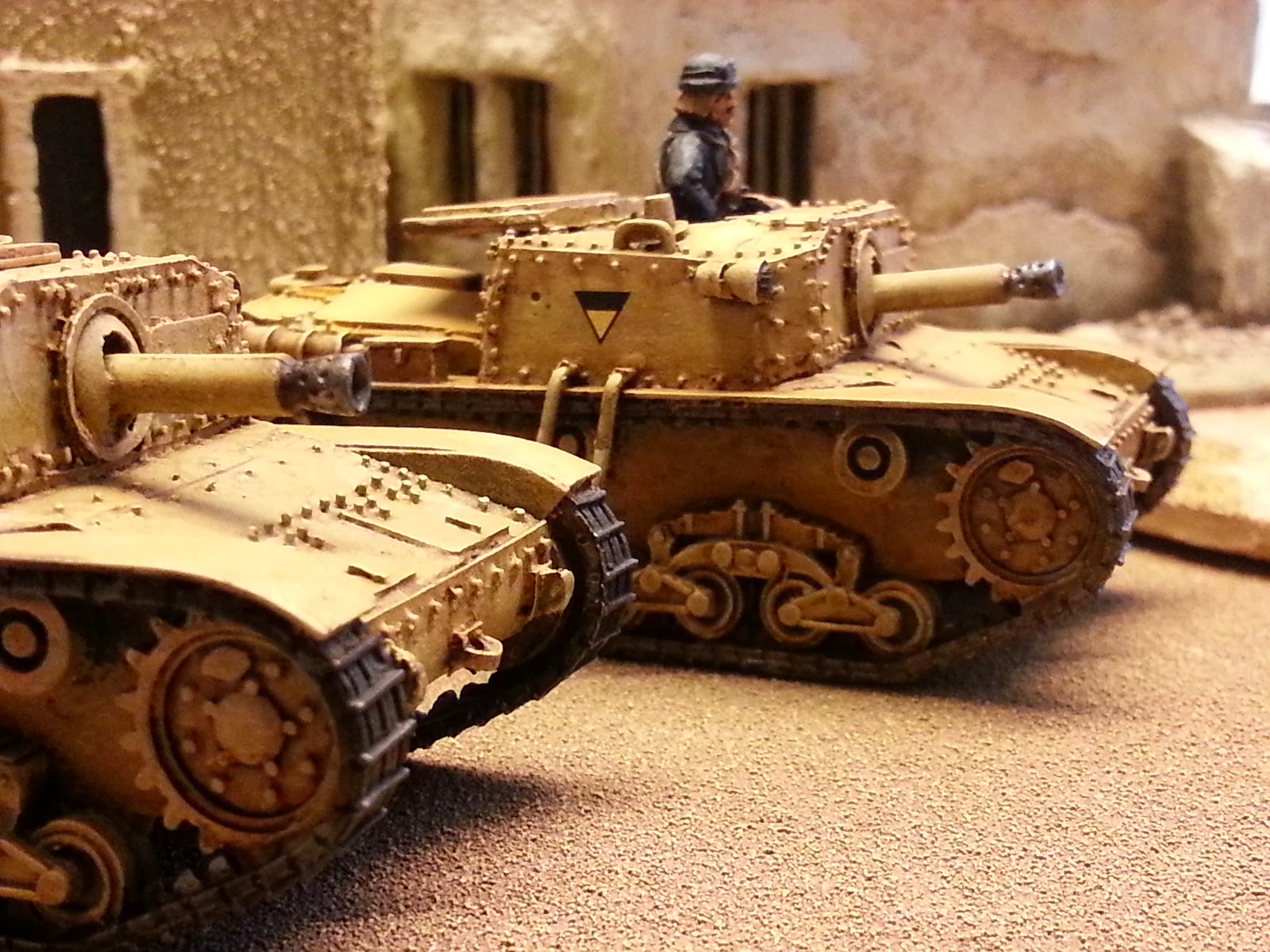 Well this week more WW2 Armour and Infantry has rolled off the production line here at Castle R. All the vehicles I own (minus 6 Bren Carriers I'm trying to ignore) are at a fit for the table stage of painting, i.e. basic paint with highlights and wash with tracks done. Slowly but surely I will get these finished by adding decals/crew/camo as required. Looking across the room there are another 8 vehicles ready for finishing touches. 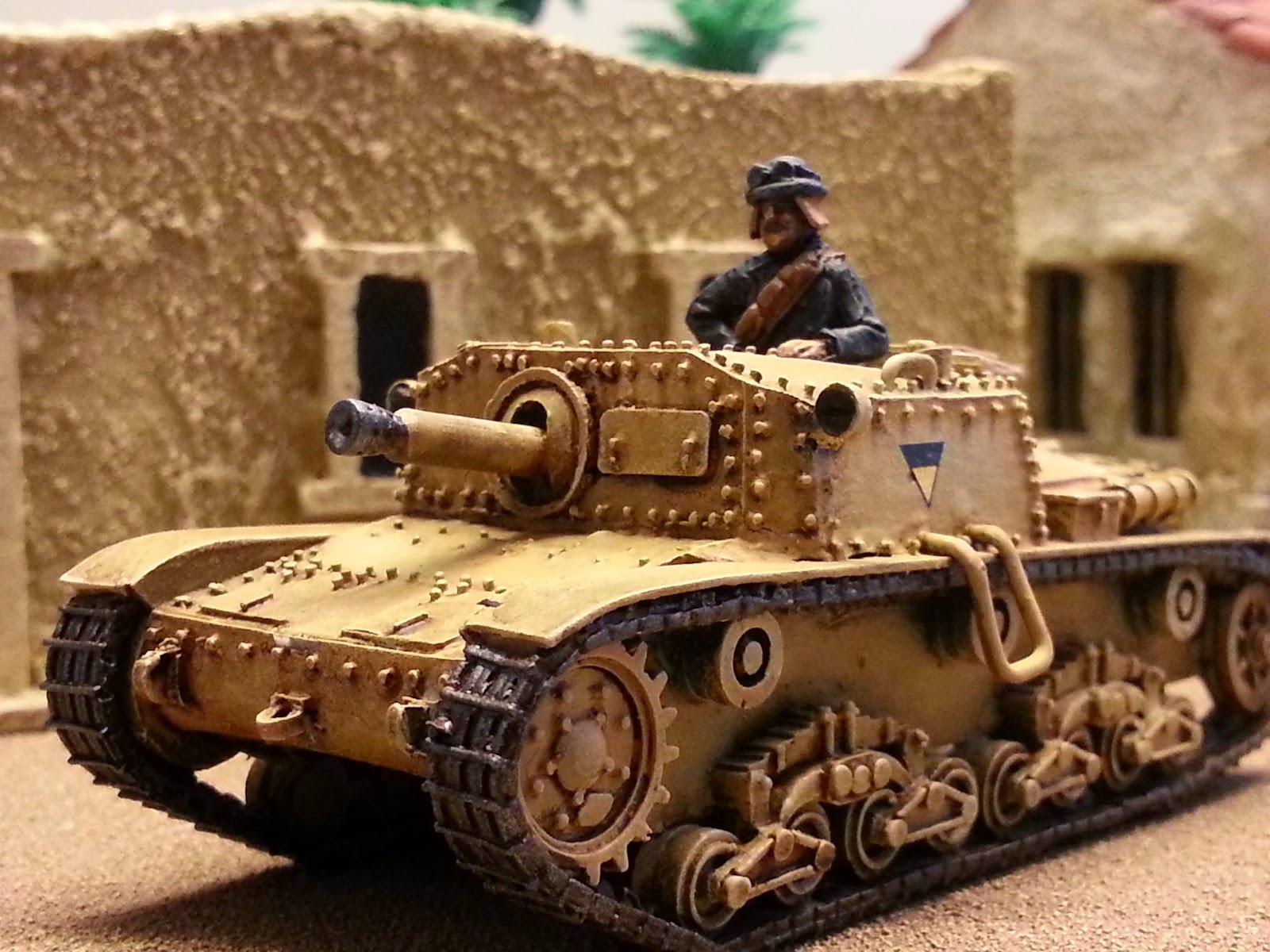 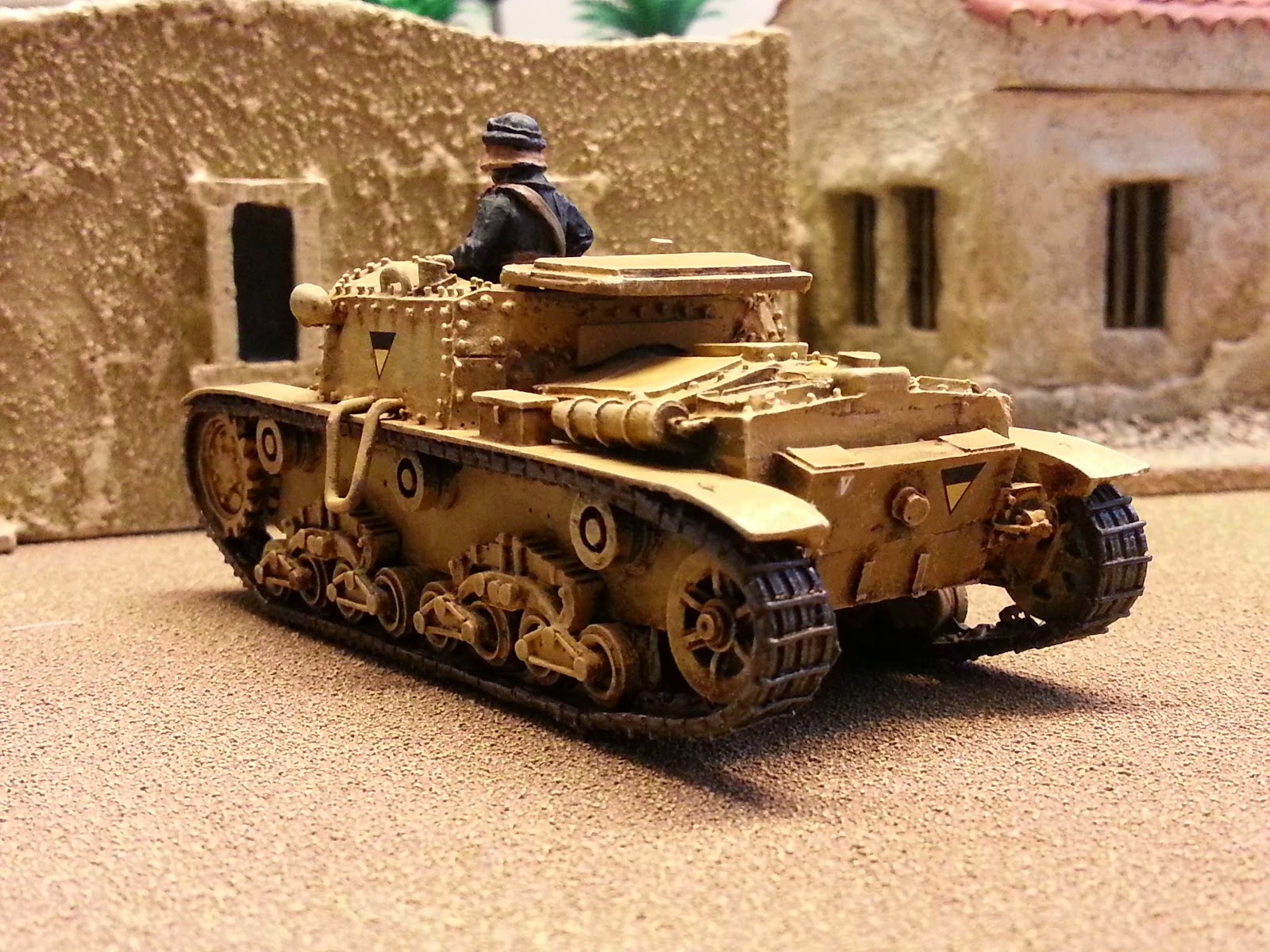 These two are from the Warlord Games range which I picked up earlier this year during their big sale, the commander is from Perrys. Decals from Warlord as well. I've gone for the basic un camo version of the vehicle. 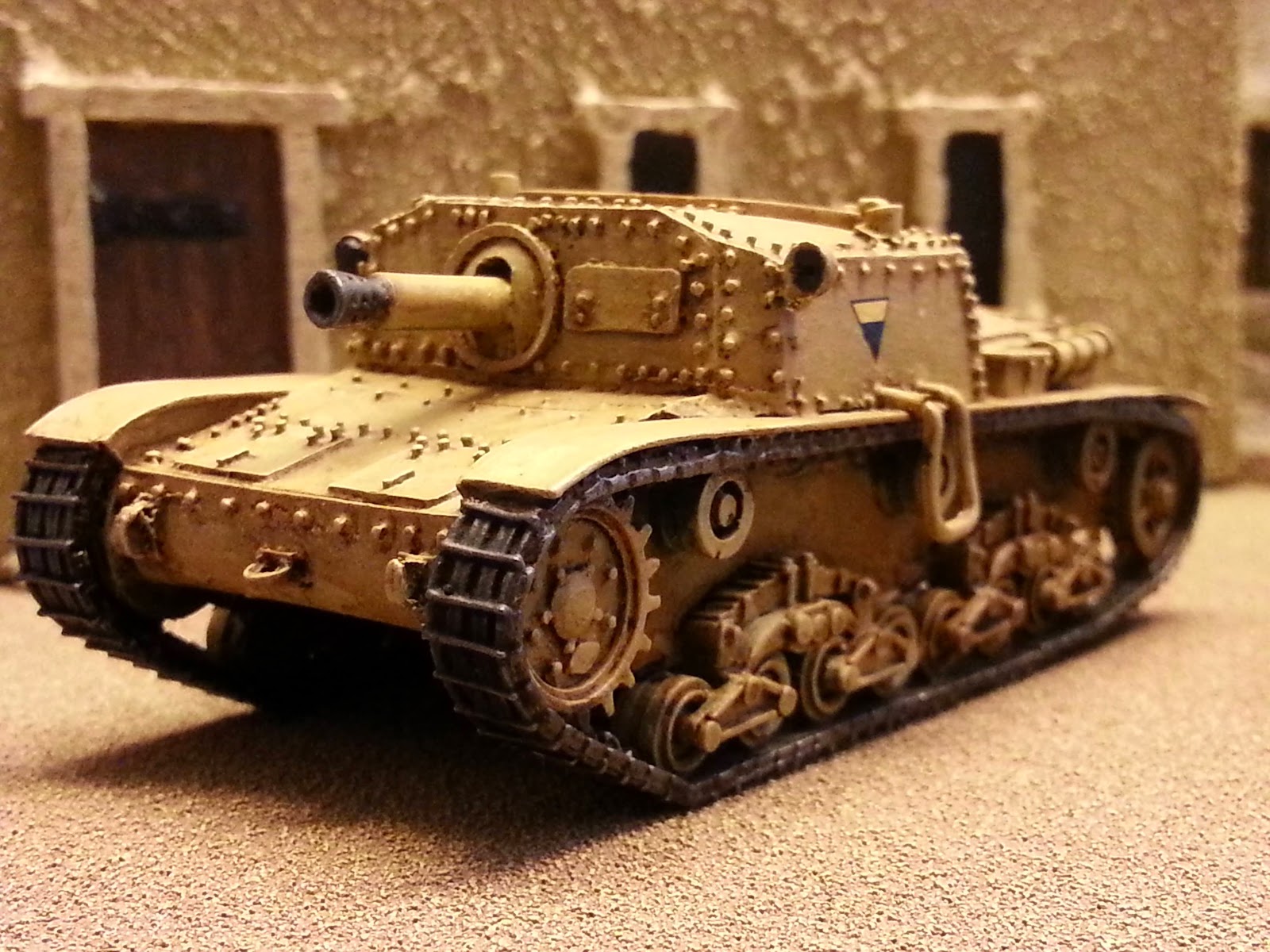 Whilst doing these I also managed to finish off a batch of bog standard Italian Infantry. As with the Brits I'm working towards a Battalion size force of these fellows. 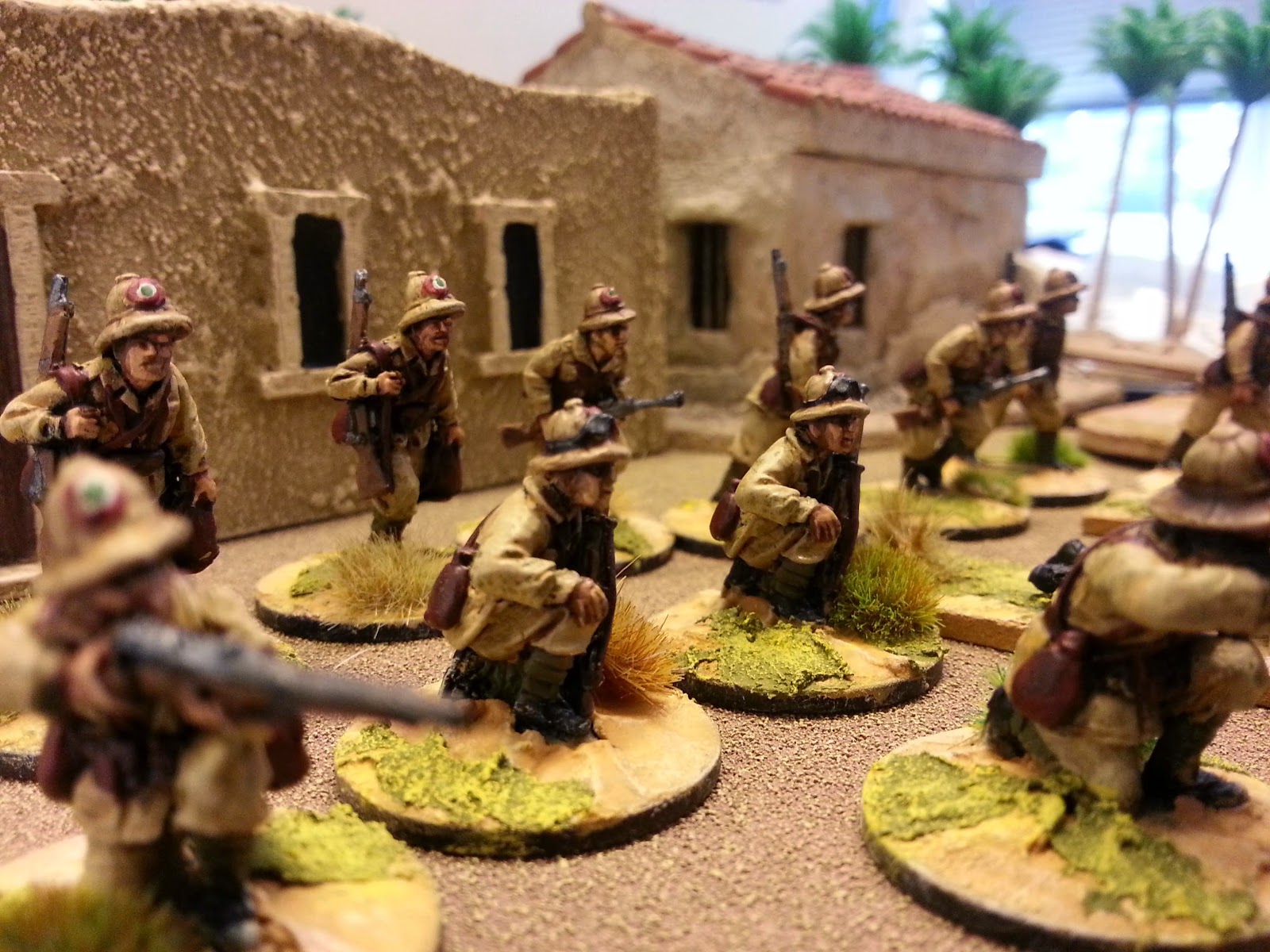 I'm about 2/3rds of the way through the Battalion, compared to the AWI stuff these are quick and easy to do, they are quite a nice break from the more complex 18th Century uniforms and a good run on these will get me back in the black with the Lead Mountain.

At the moment on the go I am halfway through the next 20 fig AWI unit, I have some EotD Civilians started, I am also building my a box of 28mm Desert Rats. Enthusiasm remains high at the moment. On the gaming front shifts mean I haven't been at the club for a while, the Naval Campaign at Castle R will complete this week, so expect a write up on that soon.
Posted by Yarkshire Gamer at 09:23:00 No comments: