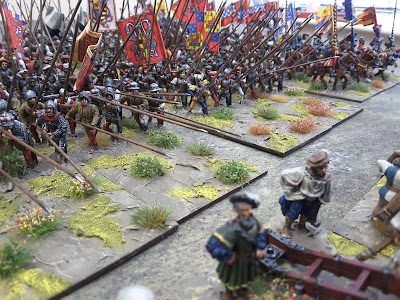 In this occasional series of posts on Yarkshire Gamer I have been looking back at some of the collections I have built up over the years, in contrast this post is more looking forward with this my latest project. 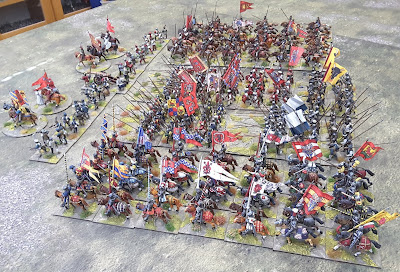 Regular readers will have seen this army build up fairly rapidly over the last few months, helped by both the Analogue Hobbies Winter Paint Challenge and an unplanned period of 6 weeks off work. It's by no means complete but this will be the bulk of the army going forward. Focus will switch to other projects but I have plans to add the odd unit here and there and let's face it an Army is never really finished.


If you prefer Moving Pictures (not the Rush album ! although that is awesome) Yarkshire TV have spent millions, ok a cup of Tea and a Tunnocks Wafer in producing this Cecil B de Mille like historical epic, enjoy. 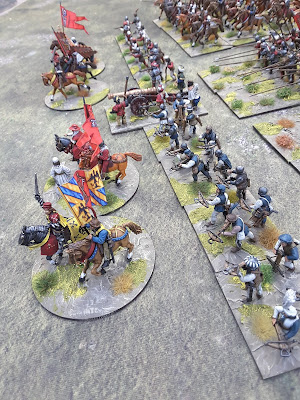 For those of you scared of moving pictures I have added some still photos to the post, above is the vanguard showing two units of shot, a gun and 4 Command Bases. 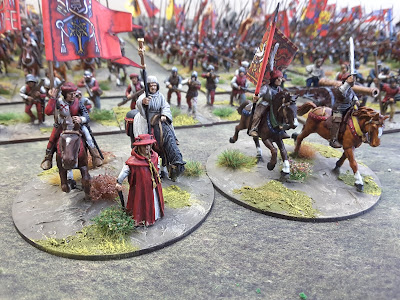 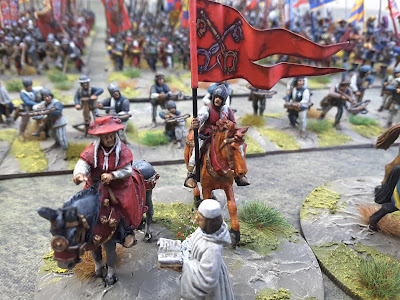 The one thing that impresses me the most with this army are these command stands, I am normally useless when it comes to these and end up with massive armies with no command bases, I am always borrowing SYW commanders when playing Napoleonic games and vice versa, not with this army, by Jove no. 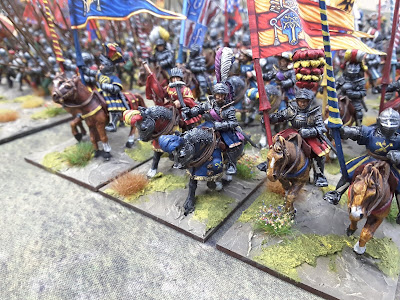 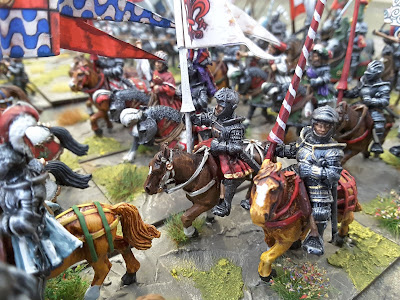 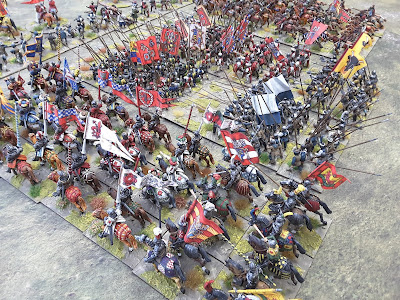 The first 5 ranks of Condottieri are Foundry, the rear 2 Perrys, although it added to the cost I am glad I went for 2 flags per 6 figures it gives the units a great look. 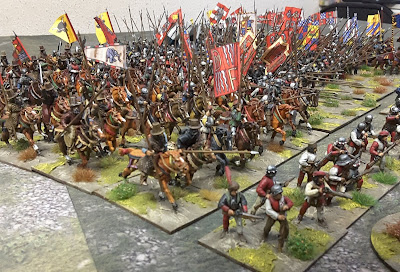 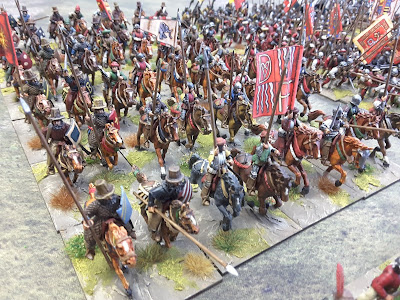 The other flank of the Parade is full of my light Cavalry, Stradiots with bow and others with Lance, Mounted Crossbow and some Light lance armed troops to, all Perrys, a mix of metal and plastic. 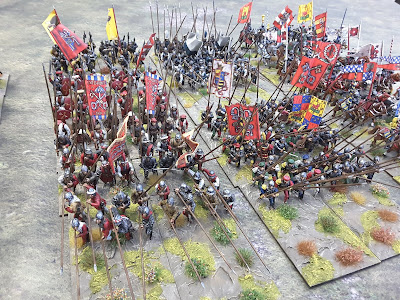 I got a bit carried away on the mounted troops for the army but somewhere in the middle of all that horse flesh are three Pike Blocks, a Sword and Shield unit and a Polearm unit. 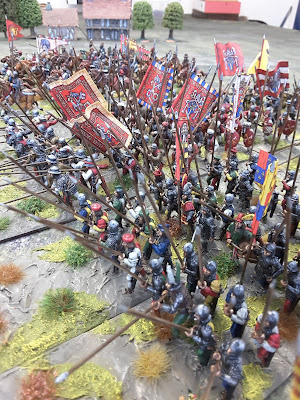 I love the way the pikes look en masse. Nearest the camera is a block from TAG figures the rest are Perrys again a mix of metals and plastic. 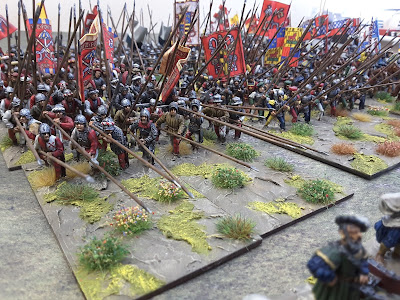 My personal favourite unit is the red and white liveried Papal Pike Block, the colours, figures and flags just seem to work really well together. 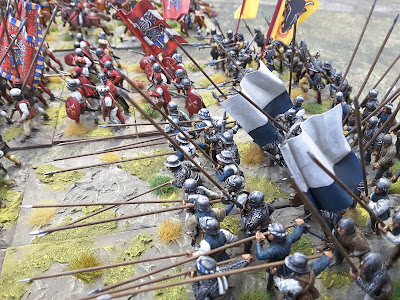 Last month a did a little review and a couple of videos on the excellent 28mm Italian Motorcycles from Dog Tag Miniatures.

I have constructed, painted and based the entire squad now ready for their first action in our next Op Compass Campaign Game in a few weeks time. 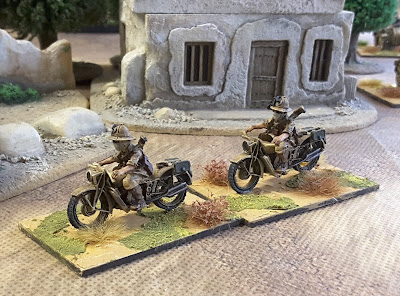 The first model type in the squad are these rider only solo motorcycles, titled Despatch Riders. I particularly like the scarf covered faces and the dark shades, almost the CHiPs of the desert. 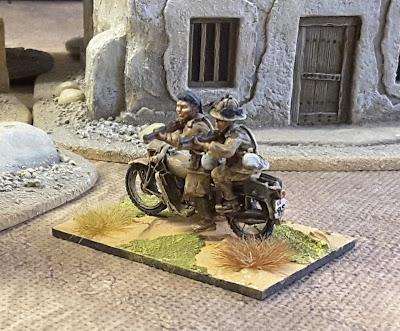 Then we have a motorbike and pillion passenger both in a firing position, not sure who is steering ! 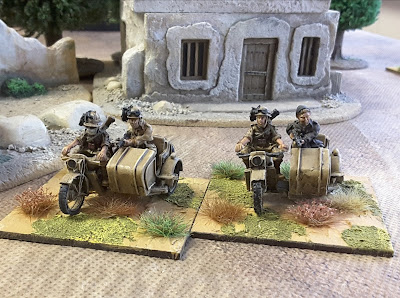 Next up are two Sidecar Combos one of which was the "model" for the initial review post. I have had a bit of difficulty with the join between bike and sidecar which I found quite fragile and difficult to bend to the correct angle without breaking it. I ended up putting supports under the sidecar and using grass tufts to hide them. 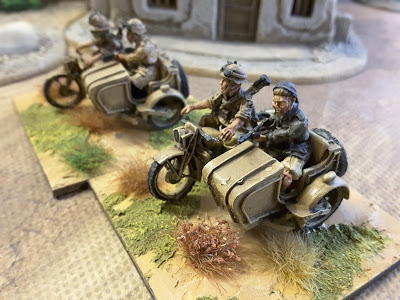 There was a few queries on the previous post about whether or not the sidecar is on the correct side, it is, I have a photo of an original. The BMW 75 combo used by the German Forces has the side car on the other side as is normal for countries who drive on the right however these are Moto Guzzi bikes made in Lecco on Lake Como in Northern Italy. 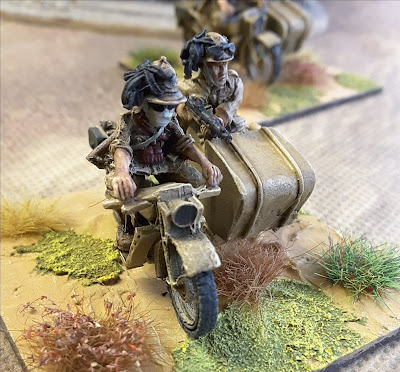 My basic research into this discovered that until Mussolini came to power there was no official side of the road to drive on (those who have driven in Italy will vouch that nothing has changed !). Before El Duce proclaimed that people would drive on the right the North tended to favour left hand drive and there is some suggestion that some areas held out as a "lefty" for some time, therefore I can only assume that as Moto Guzzi came from the North their factory was tooled up for this. That's my theory, any Italian friends out there ? 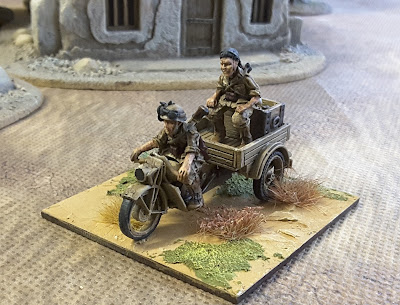 The final model is this trike which I absolutely love. The mini is bought with an open back and I have added an Ammo box I had lying around and sat a figure on it. The figure came as a pillion rider for one of the Sidecar Combos but I preferred him like this. 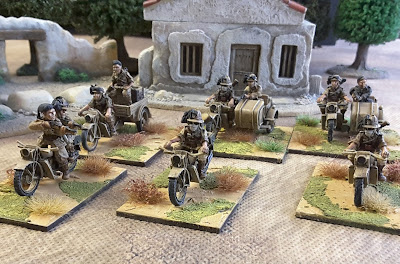 These are a great addition to my Italian Desert Force and something I have been waiting for, for a long time. 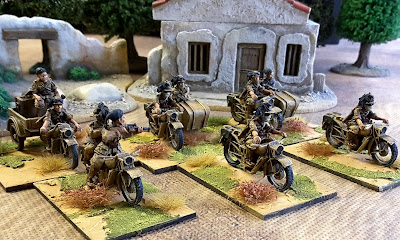 And yes I did give them individual number plates. 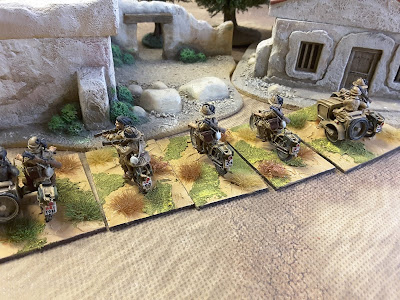 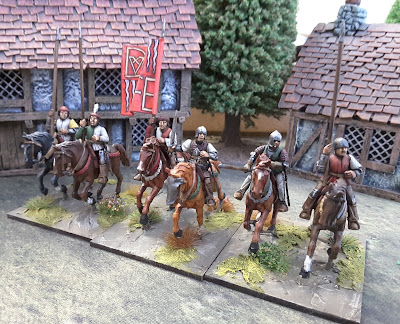 Having run out of fancy Dan Gendarme in all their feathers and livery it's time to go "smart but casual" with these chaps, 6 figures from the 28mm Perry Miniatures plastic Light Cavalry box set.

I think this box set is turning into one of the most versatile avaliable, not only have I used it for these lance armed troops but you get the sword armed chap for an officer and there is a musician arm in there as well. The box is also my "go to" for Standard Bearers and that's before you add in the Crossbow (next unit) and Bow options. I don't know how they got so much on each sprue. 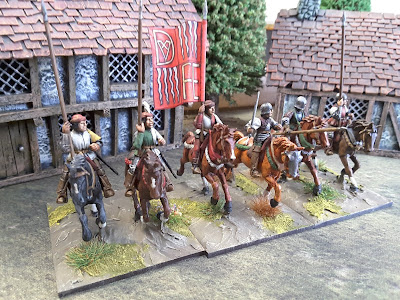 I'm sure you will all know the score on the painting by now, oil wipe method horses (this is the last six of the batch of 80 plus horses I painted back in December), riders done in acrylic paint (mostly Vallejo) with the odd subtle wash and a Pete's Flag stuck on a pole and hoisted above said unit for effect. 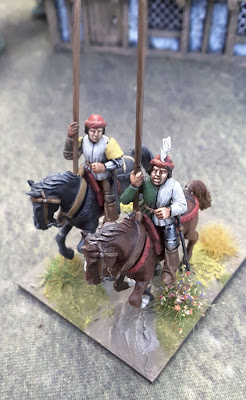 This will be half of a 12 man unit however I plan for these to be multi-functional in my army. They can be used as a Light Cavalry unit on its own or they can be split up and mixed with the Gendarme to increase their unit size, maybe 6 Gendarme in the front rank with 6 of these behind? It's a work in progress. 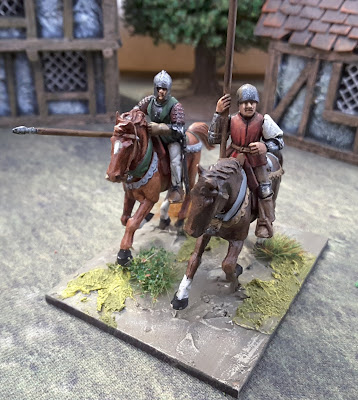 The traditional 3 man "Lance" consisted of the main man (the Gendarme), the lesser armed Squire (these guys) and a non-combatant or general dogsbody back at camp to polish the armour and make the tea. 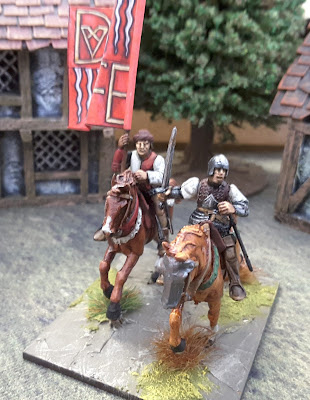 The big drive on the Italian Wars Project has come as a result of the Annual Analogue Hobbies Winter Paint Challenge which is nearing it's end (20th March) so I will do a Troops on Parade feature on the Army at that stage. Next up will be some Mounted Crossbow from the same box set along with another 6 lance armed figures to up this unit to 12.
Posted by Yarkshire Gamer at 08:54:00 10 comments: