With two widely spread bridges over a river the game quickly developed into two separate battles, the Nationalists had a hidden set up using the TooFatLardies blinds idea. You might spot the small beige discs in various terrain features, there is one of these for each hidden unit plus an additional disc per unit, units become visible when they are spotted or they fire. 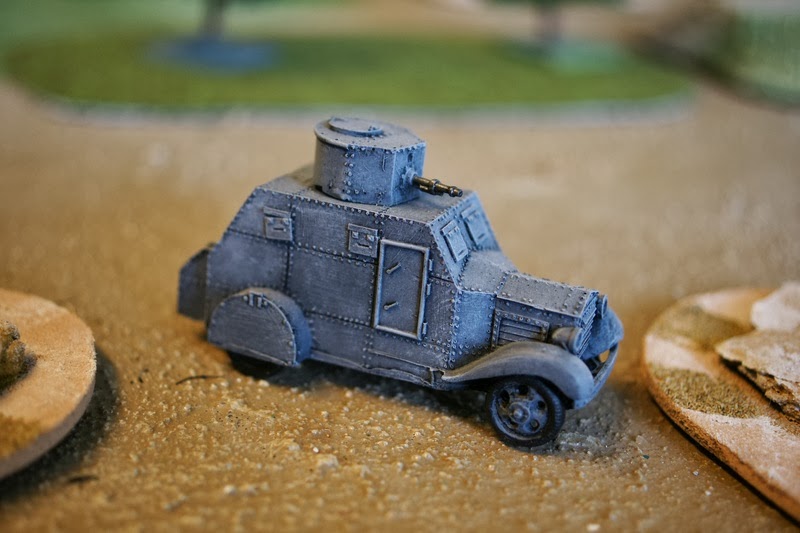 Things on the Republican right flank didn't go according to plan, 1 unit of Irish, the HQ and the MG rolled towards the bridge on the road, in a typical "recon by death" move. It worked and the Nationalists opened up with their MG from the redoubts. 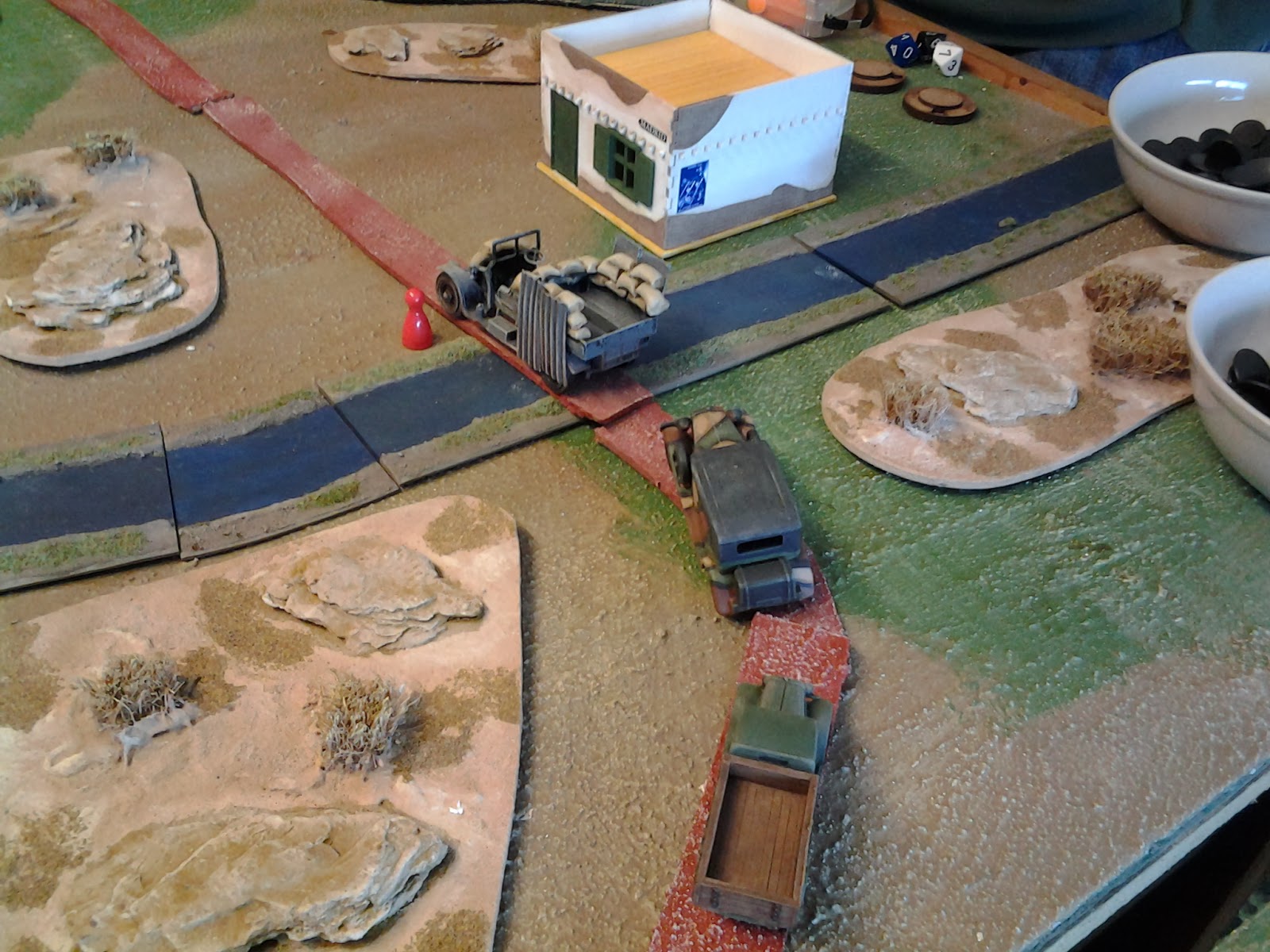 The right flank grinds to a halt on Turn 1

The infantry debussed and legged it into the old toll booth house by the river. They were just putting a brew on when a hidden unit of Carlists charged the building from the nearby wood. The God of Dice was on the side of the righteous and the Republicans ran screaming back over the river without firing a shot. 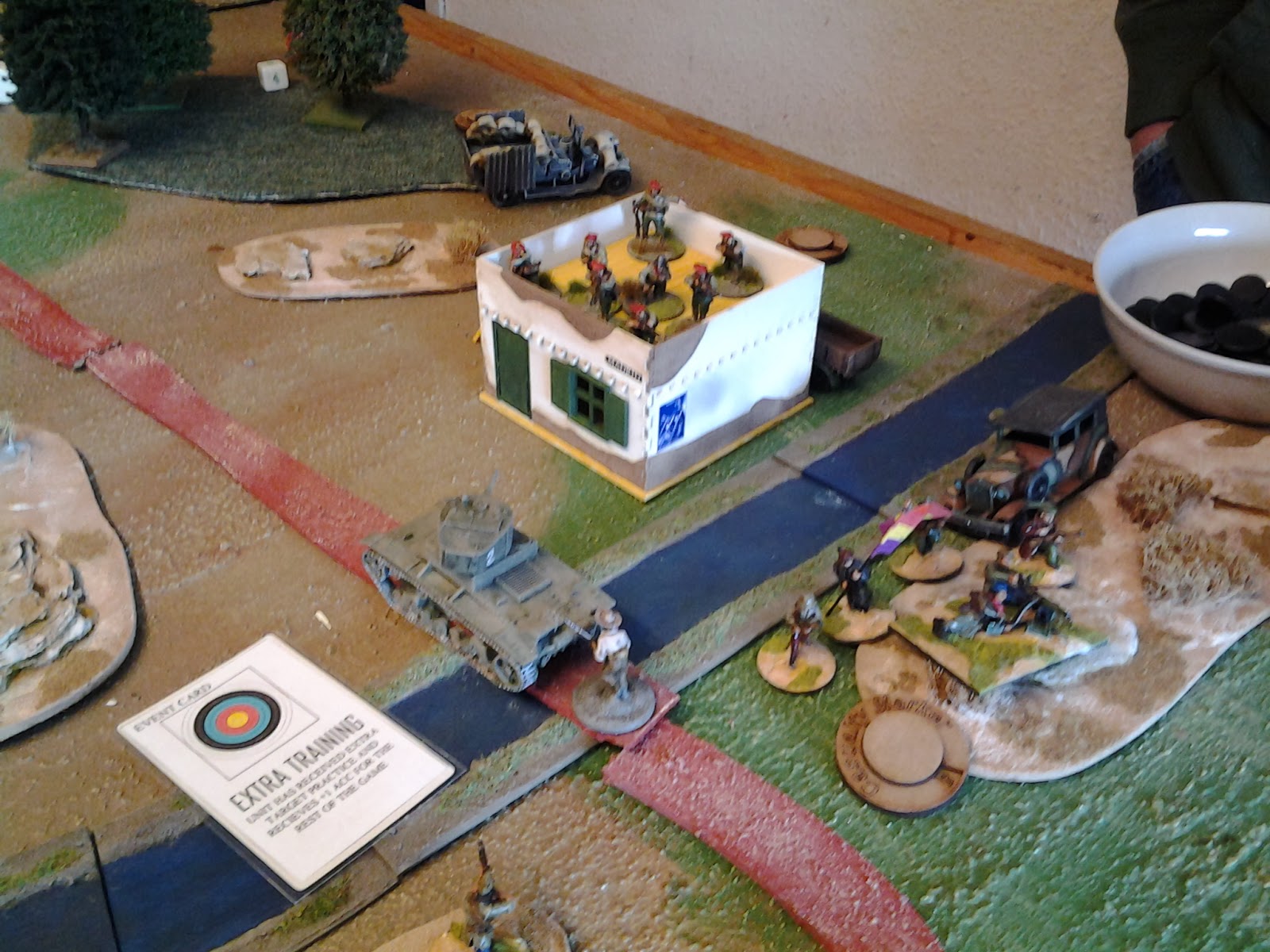 Not the best photo, but it shows the victorious Carlists in the Toll House, the HMG and HQ diving for cover in the scrub. By this time the T26 has arrived, Art Observer can be seen hiding behind it. You can also see one of our random event cards, giving extra accuracy to the tank along with one of the wooden casualty markers which we use to record Ammo.

Clearly it was time to spend some dosh and the Republicans purchased one of the three T26 driving straight out of the show room onto the bridge with the Artillery Observer in his camouflaged sombrero. It didn't take too long before the Carlists were wiped out, both Mgs from the T26 and the rallied Vickers being way to much firepower for them. 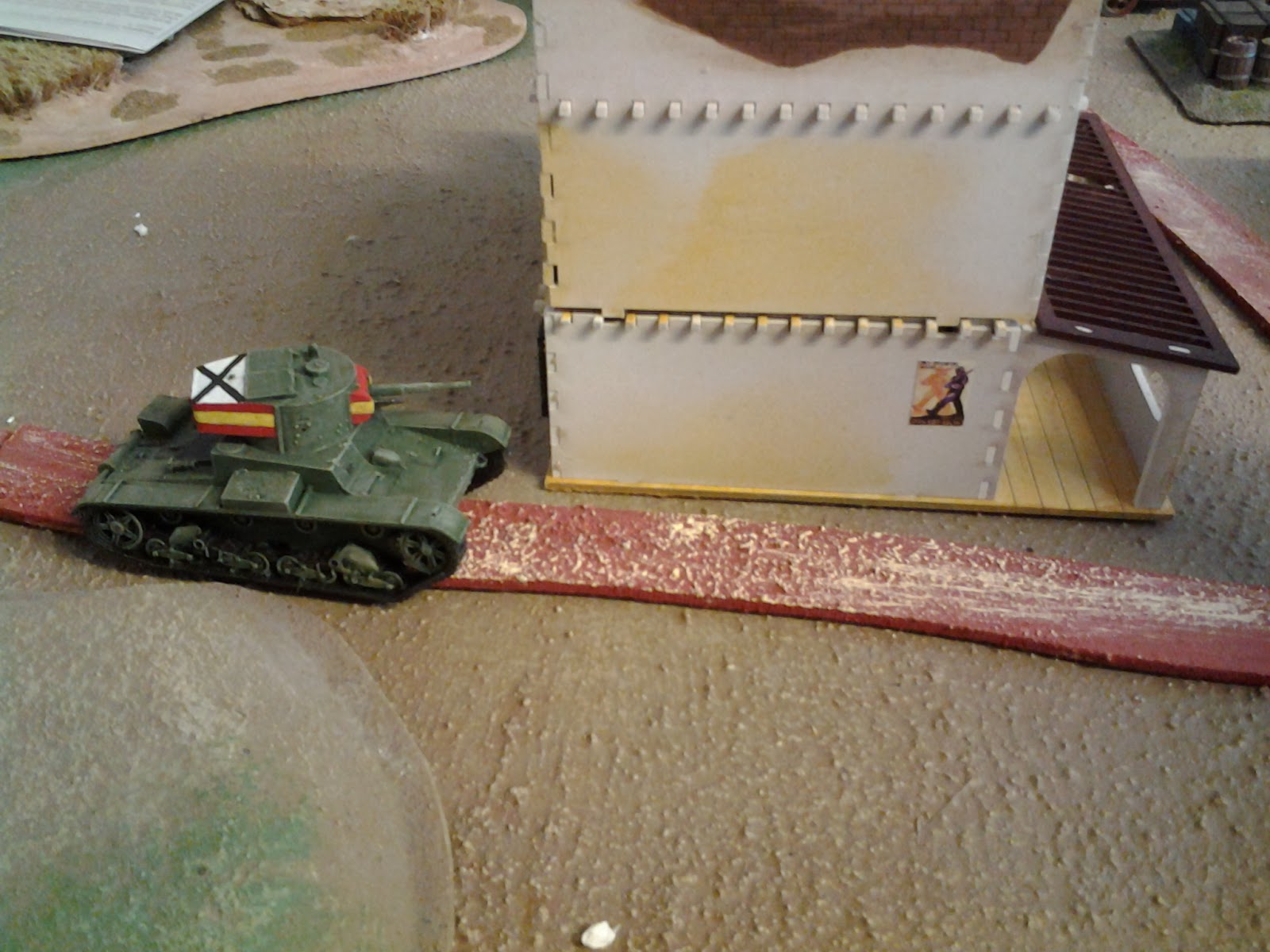 A Nationalist T26 arrives unseen and sneeks through the village.

Whilst occupied by the Carlists the Republican T26 is unaware of what is about to hit it. A loud bang on the side of the turret certainly wakes the crew up ! No damage caused but the vehicle is pinned. In one of those magical moments when all the dice go right, the Republican tank, rolls the dice and unpins itself, it rolls the dice again spots the unseen enemy tank, rolls again with its last dice (our rules allow vehicles three actions a turn) and hits it. Another roll for hit location (Nationalist tank is hull down so 50% chance the shot will bounce of the redoubt) hits the turret and wallop the Nationalist T26 loses its main armament. The crew however survive and carry on in their mobile armoured machine gun carrier.

The right flank calmed down after this, the Republicans didn't commit much more resources to this flank, probably due to the open ground in front of the redoubt and a long range duel continued for the rest of the session. The Nationalist T26 continued with its run of "luck" and was struck by a 75mm Art shell which ripped a track off, turning it into an immobile armoured machine gun carrier. 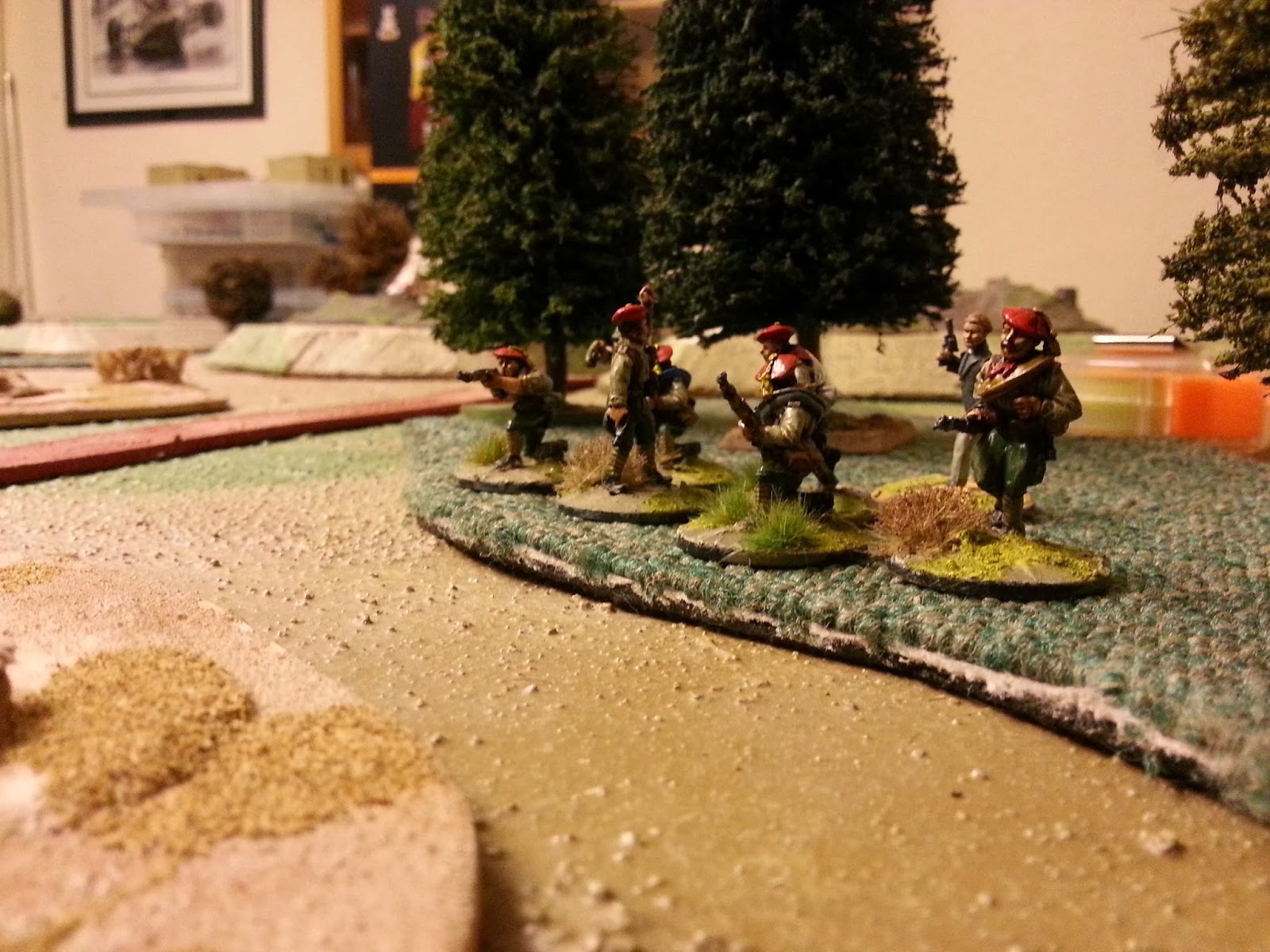 The end of the session saw the "Mad Priest" carrying bundles of dynamite forward with his beloved Carlist brethren, it forced the Republican T26 back over the river, No one messes with the Priest ! 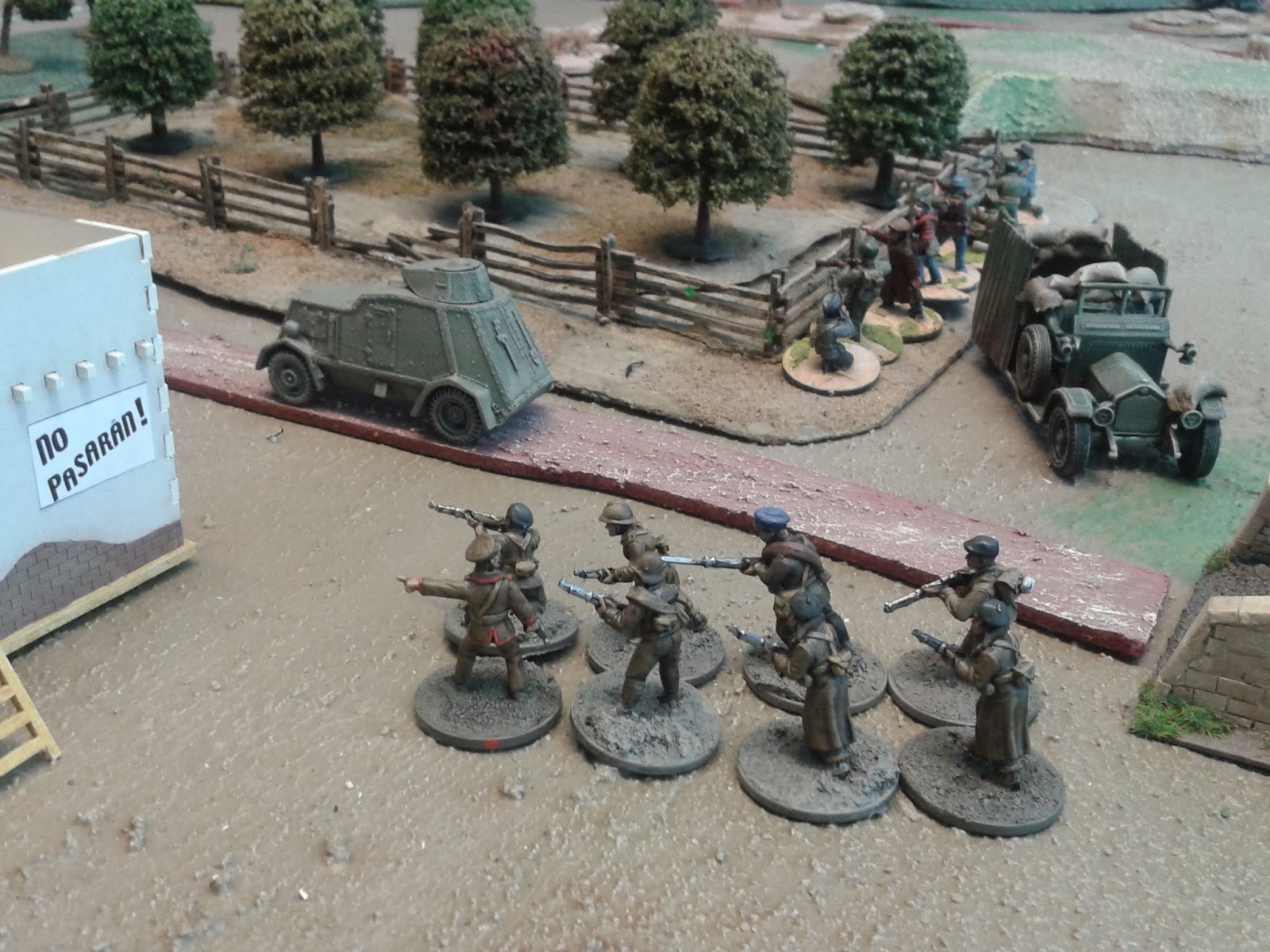 A walk in the park ?

The left flank started more slowly, a cautious advance lead by the UNL and a unit of Irish followed by the Anarchist conga had pushed over the river, the Irish debussed and were heading for the orchard whilst the Anarchists (after pausing to reorganise as they were advancing in sequential number order ) where heading for the farm buildings. Then they heard a noise overhead....... 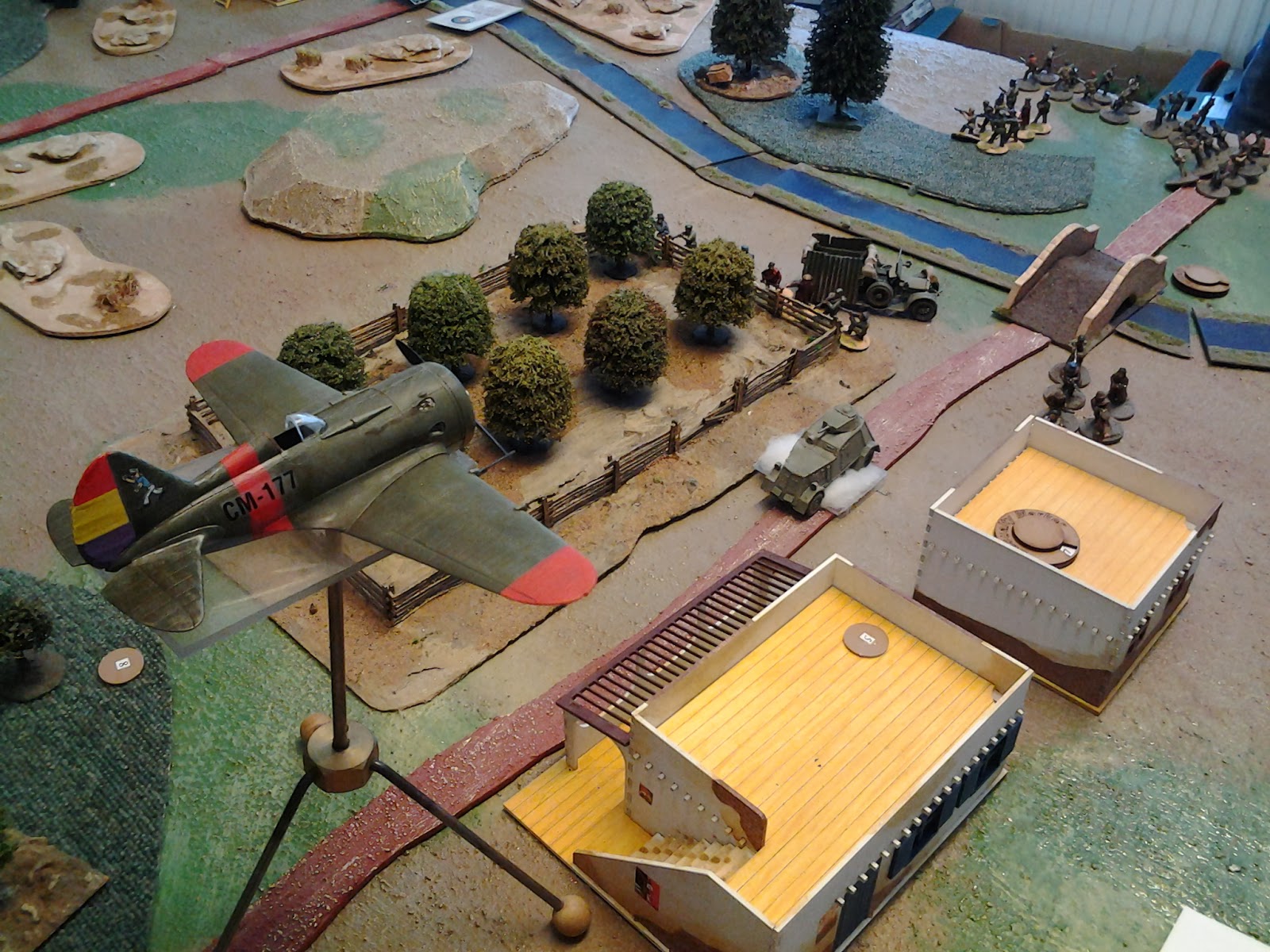 Anarchists run for cover as a captured plane attacks the column

The air attack took out the UNL using its "balls of death" (two round bomb templates side by side) and strafed the Anarchists. This however was only a minor set back, with some good luck on the money front ( a Lottery Ticket win in the random events ) the Republicans just bought another T26 and sent that down the same road. 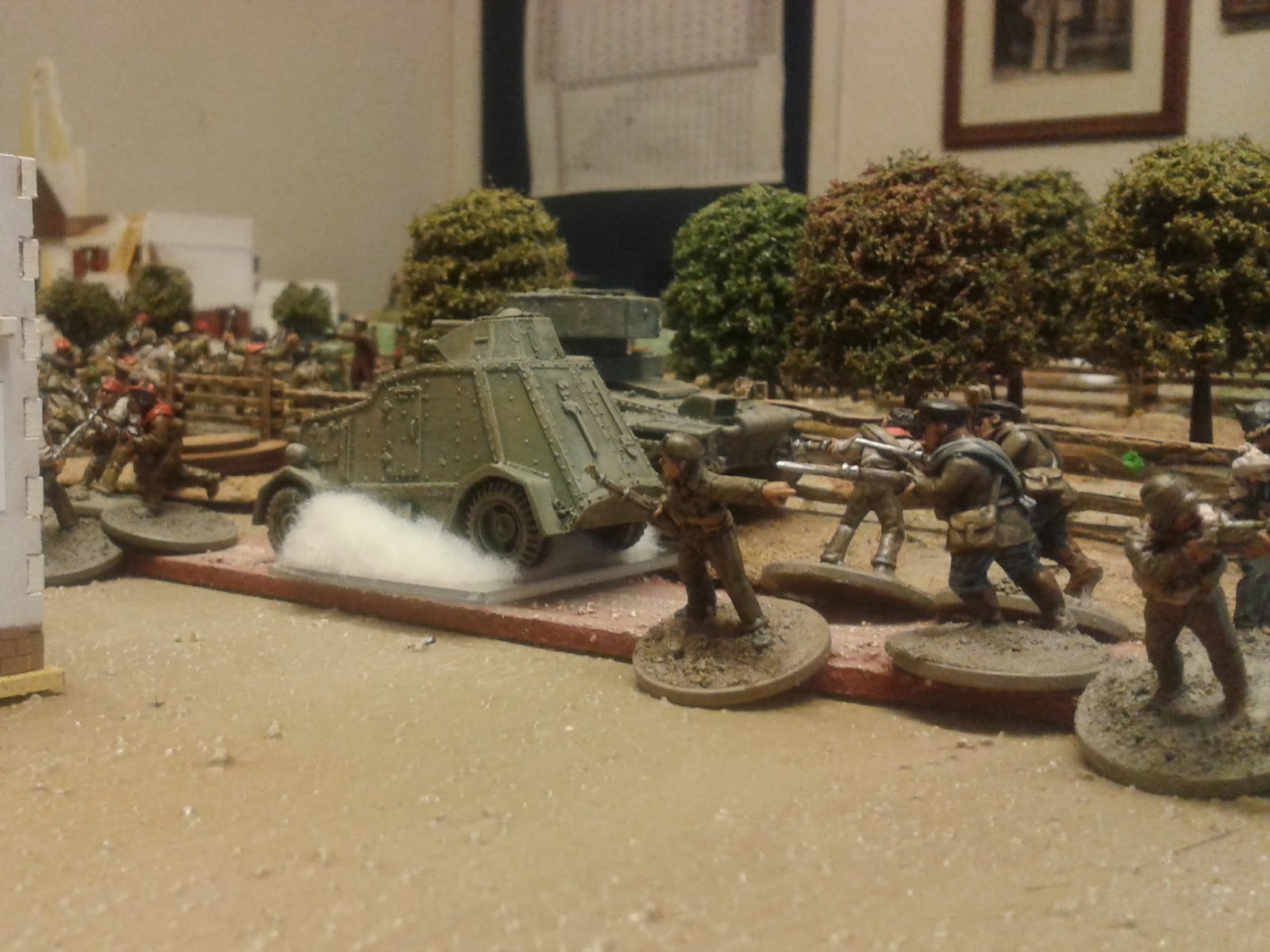 A T26 and more Anarchists advance past the burning UNL.

The Carlists put up a stand in the wood to the north of the orchard but were overwhelmed by numbers, the session ended on this side of the table with the Republicans regrouping, a number of units were out of ammo and awaiting supplies, a line had been formed waiting the start of the offence towards the village and hopefully for the Republicans the ammo dump beyond. The Nationalists in the meantime and been slowly filtering some Foreign Legion units into the town and had placed an Anti Tank gun in the redoubt waiting the oncoming assault. 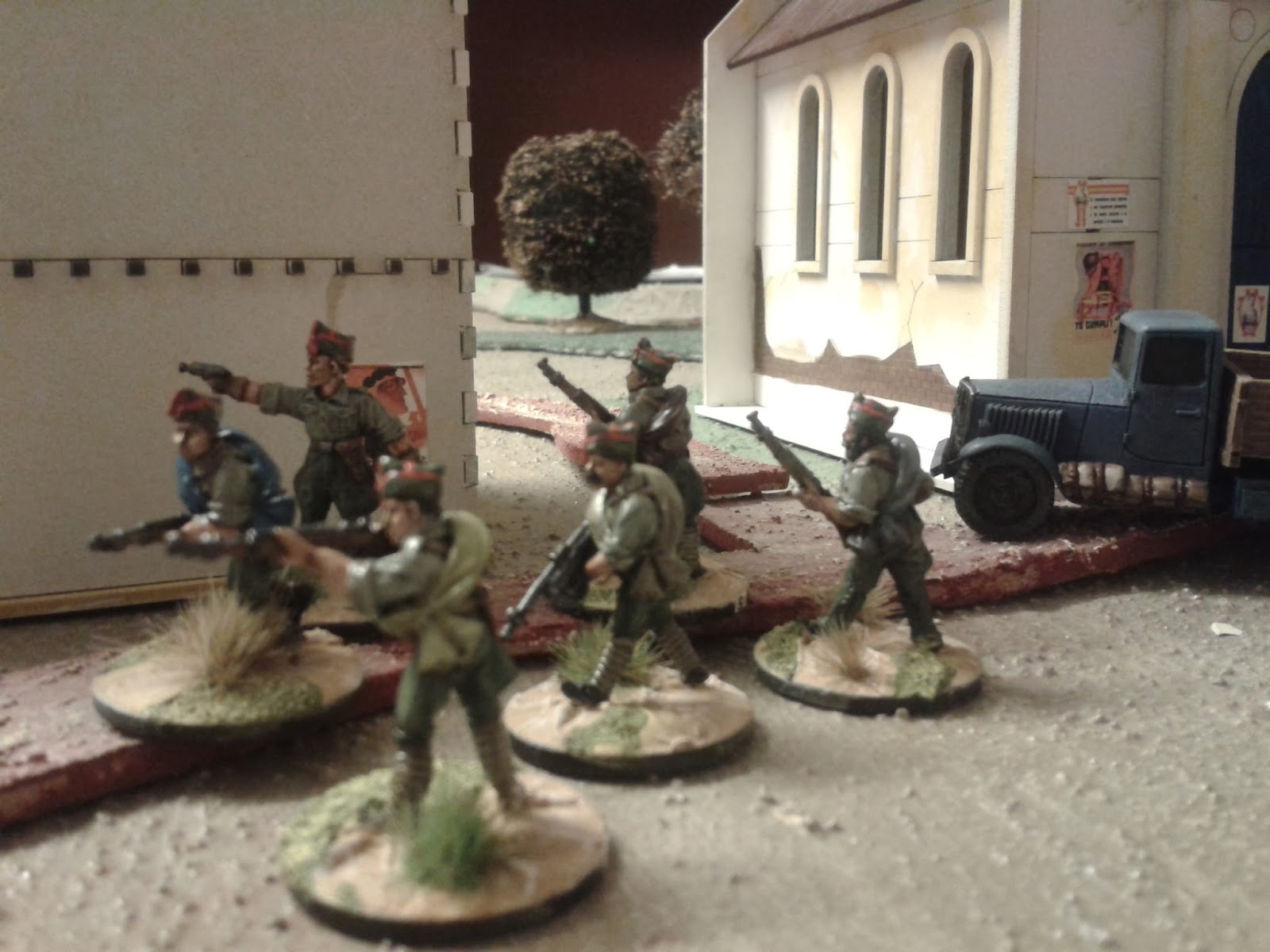 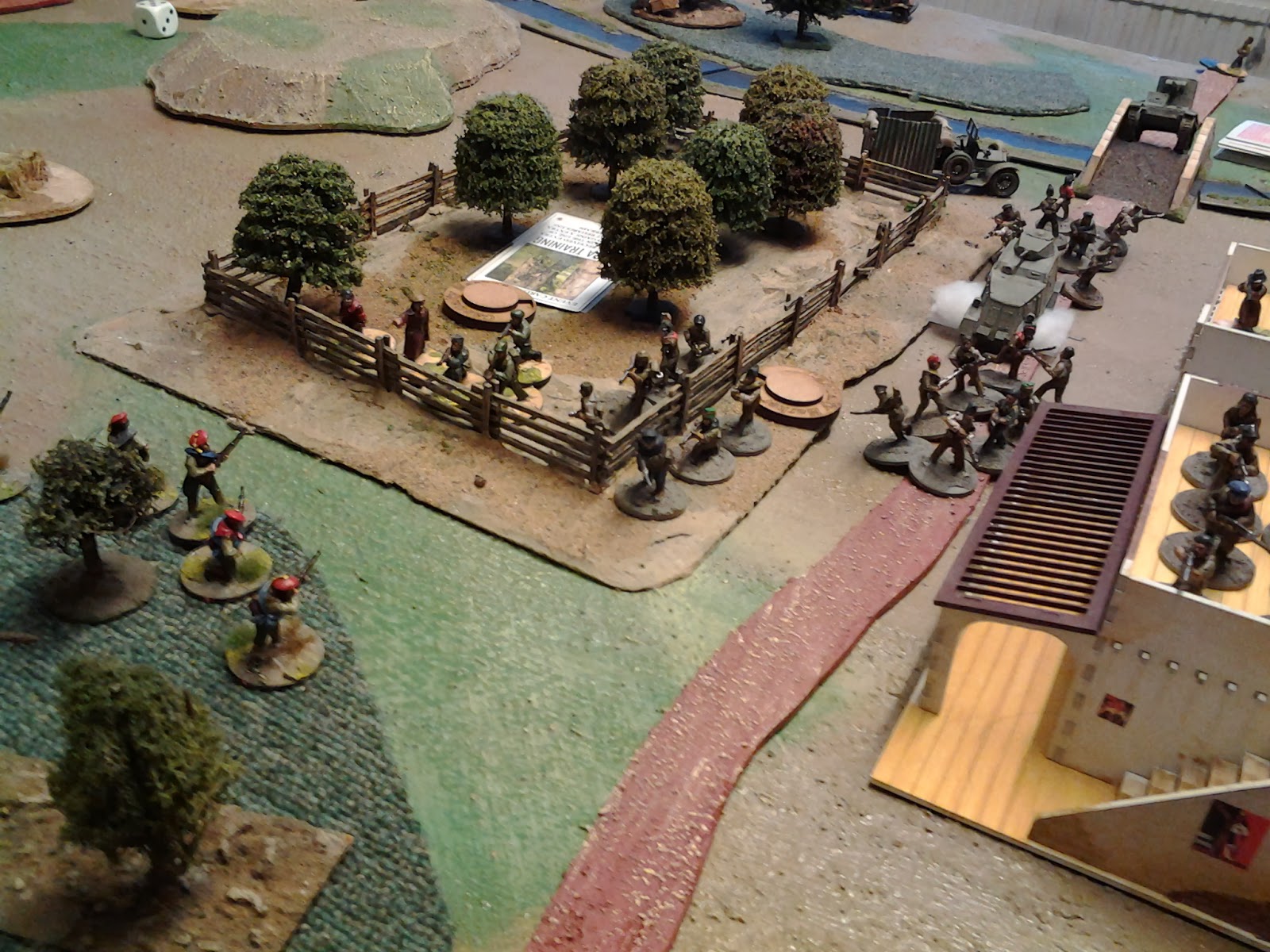 Game night is this Thursday when we will play to a finish, will the Republicans smash through the Fascist lines and declare victory for the people or will the Nationalist crush the rebel scum and win the day, tune in and find out.


Last weekend saw the start of a new game set in the SCW at Castle R.

The background was as follows, the Nationalists have paused in their advance using a river as a natural barrier to reorganise prior to the next big offensive. Leaving a light force of Carlist Militia to cover the river crossings and supply dumps, the remainder of the force is forming up nearby. Republican recon has spotted this opportunity and has sent a flying column to force the river crossings and capture supplies. 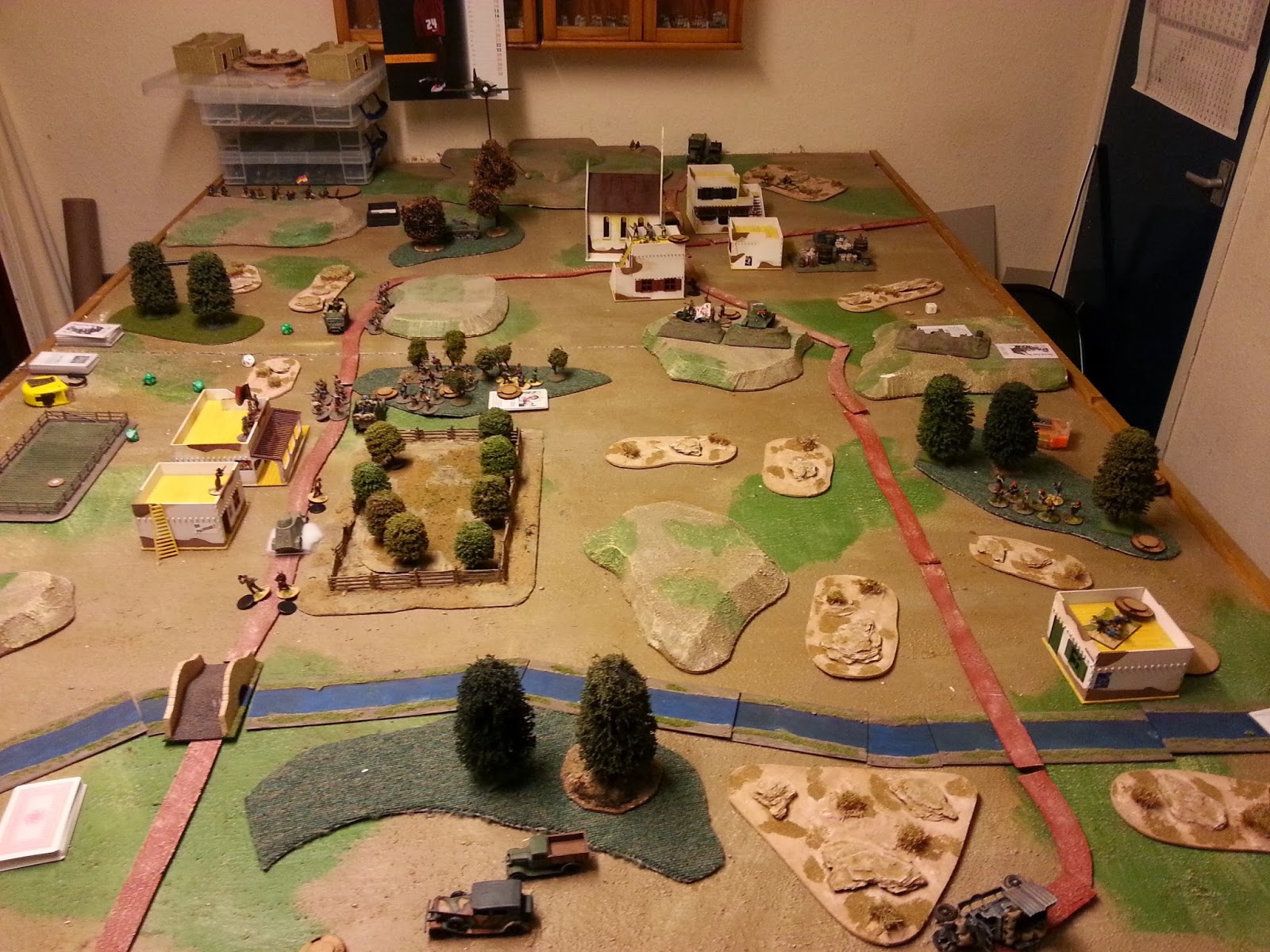 The table layout, Republicans attacking up the table from this view point across the river, taken at the end of the first days gaming.

The Republicans start with a company of International Brigade (Connolly's Irish} and a HMG all motorised ( For our rules this is a Command of 4 figs including a CO and a Standard Bearer and 3 units of 8 figures armed with Rifles ), a UNL 35 Armoured Car, along with an off table battery of 75mm field guns and an observer attached to the HQ, who start off table heading for the bridges.

The Nationalists start with a company of Carlists and a HMG as well (same organisation above ) they have three unattached lorrys based at the supply dump as generic transport.

Our rules use a purchase system to upgrade units, buy reinforcements and ammo, each turn each sides rolls for extra money to buy goodies. To add to the flavour of the game I bought some old Spanish currency off ebay. 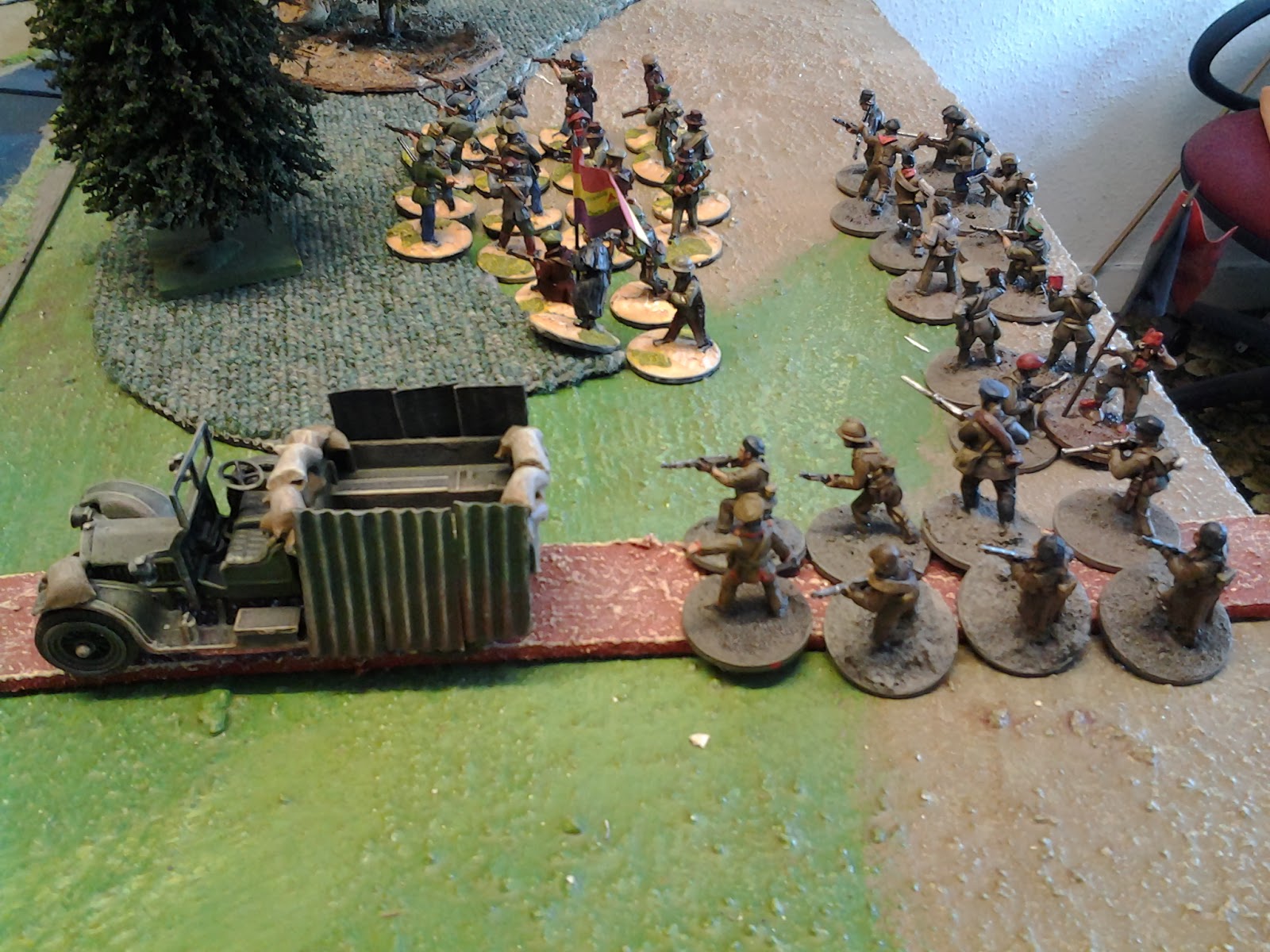 The International Brigade form up under cover ready to advance whilst the Anarchist Conga moves up.

Each side rolls a number of d10 each turn, every roll below 5 generates 10 pesetas, on the first turn the Republicans had 15 rolls, the Nationalists 10, after that it was 2 rolls each with a extra 3 rolls every 5 turns. The sides can then purchase more troops as well ammo.

The Republicans had a company of International Brigade (Mac Paps) and 3 Companies (with 4 8 man Rifle units + HQ) of Anarchists available to buy along with 2 HMGs, a Heavy Mortar, 2 Light Mortars and an Anti Tank Gun.

The Nationalists had a company of Carlists, 2 companies of Legion (same organisation but smaller 6 man units with integrated LMG) and a company of Civil Guard (HQ & 3 6 man units) along with a light mortar, a HMG and an Anti Tank. 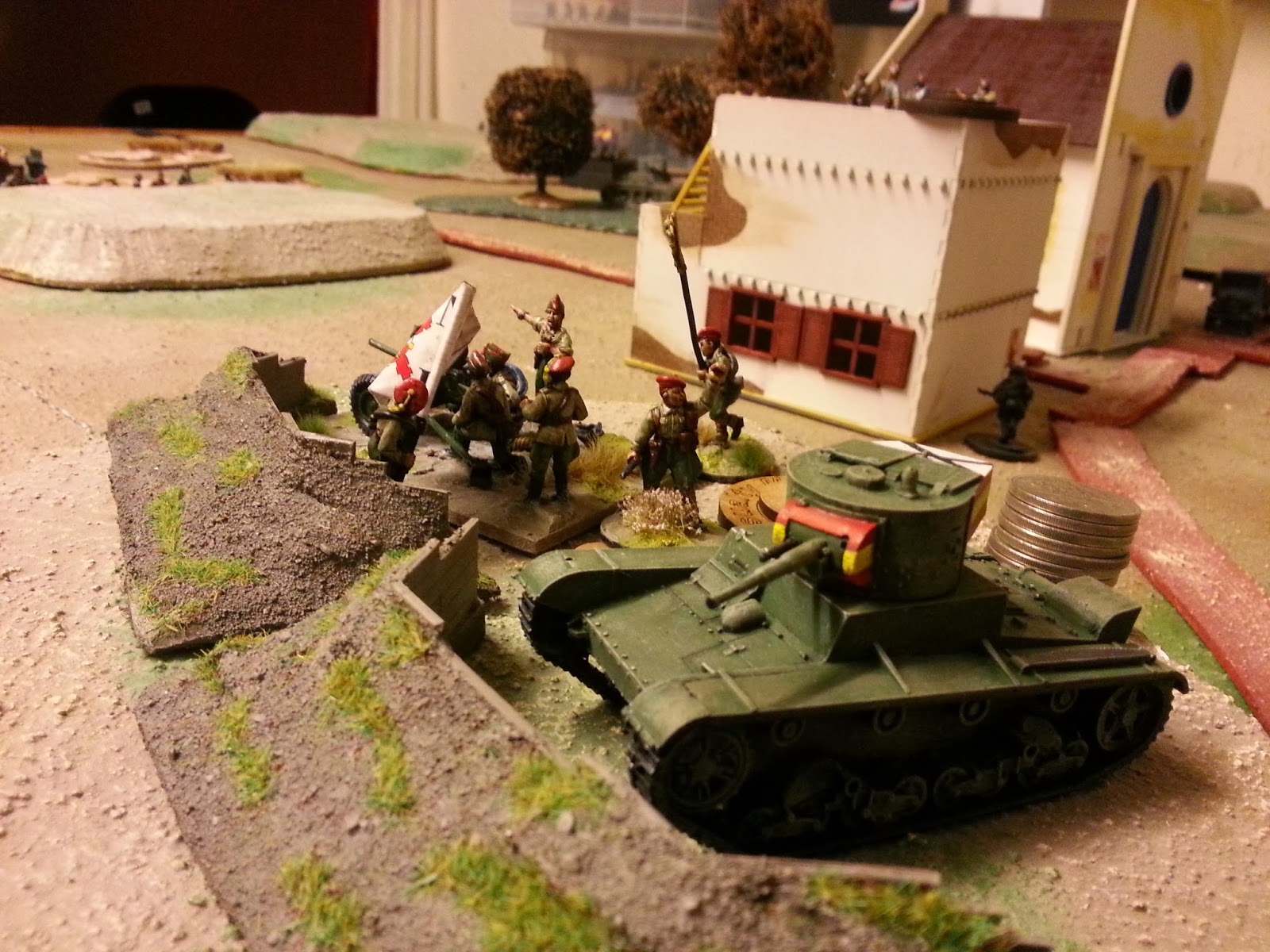 Later in the game a Nationalist redoubt containing a T26, an anti tank gun, a Carlist HQ all protecting the Nationalist money stash.

In the "car show room" there were 3 T26's to buy along with the old faithful FT-17, 2 Armoured Cars (another UNL and a Bilbao) and 3 CV33 Light Tanks which were only available to the Nationalists.

The house rules we use are a mixture of various sets, Disposable Heroes, A World Aflame and TooFatLardies influences are all in there. Each turn uses cards to activate units with Event Cards mixed in to spice up the game and make it less predictable, it works for our group.

In the next post I'll cover the first sessions gaming.

Whats it all about

Whats it all about ? 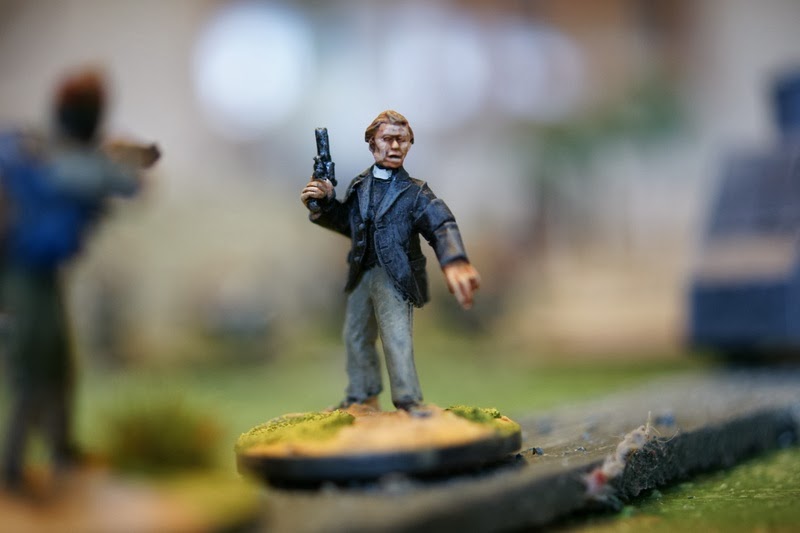 The "Mad Priest" a 28mm Musketeer Fig and Character of many a Spanish Civil War game painted by self.

Like many, I'm sure who are drawn to the blog I have been gaming since I was in my teens, starting with boxes of Airfix figures moving on to metal Minifigs and the like.


The main thing draining the hobby funds are the wonderful products of the Perrys, they have over the last few years drawn me in to periods I hadn't really considered in the past.

Most of the stuff I do now is in 28mm the eyes aren't what they where, so the main project at the moment is 28mm WW2 Desert, concentrating on the early part of the conflict up to Op Crusader at the end of 1941. Also taking up the finances are 28mm SCW (Empress Miniatures very nice) and the AWI again in 28mm. Like all gamers I have boxes of stuff lying around awaiting enthusiasm or ebay.

So why do a bit of blogging ? It still amazes me, the power and ease of use of the tinterwebnet, when I started the hobby if I wanted to get an order of battle or some uniform details I had to go down the library or buy some expensive books, now type a search in one search engine and seconds later its there. I've used others blogs in the past for ideas and inspiration so I hope this blog will do the same for others. 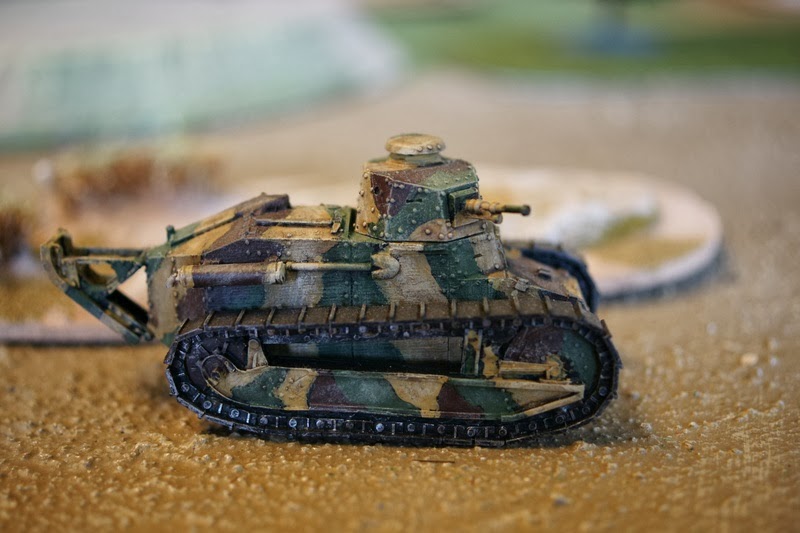 FT - 17 Force of Arms 28mm painted by me, slow as a snail, no armour and a poor gun but in the Spanish Civil War it could easily be the best vehicle on the field.

I hope to bring reviews, painting and game write ups / scenarios to the masses.