Jutland the project continues with gusto, I am finding myself running out of ships to paint quicker than they arrive and once again the ship building yard is empty. I have orders in at a couple of suppliers so back to waiting by the letter box.

First up are the 6 Pre Dreadnoughts of the German High Seas Fleet, these models are from WTJ. Known as the 5 Minute Fleet because that was how long they would last if they came under fire, they were massively outdated at the time of Jutland and were withdrawn from front line service immediately after the battle. Thankfully for them they spent most of the battle at the end of the German line out of sight due to visibility. 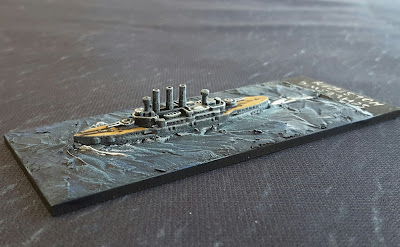 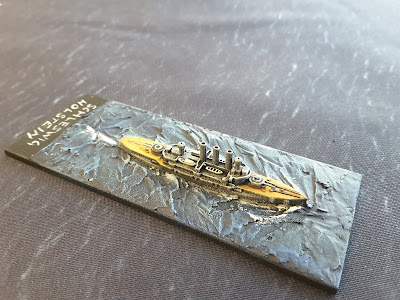 2 photos of one of the 5 Deutschland Class Ships,  Schleswig-Holstein to give you an idea of the detail on the model. 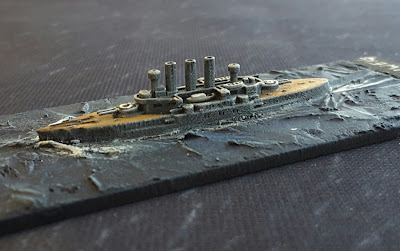 There was just one of the preceding Braunschweig Class at the battle, the lead ship. Very similar to the Deutschland but some of the secondary guns were in turrets giving them better elevation. 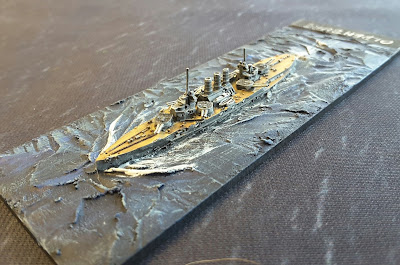 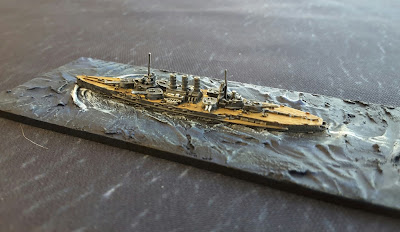 I placed an order a while back with Magister Militum for the remaining 8 German Dreadnoughts required however following the sales at Salute they only had 2 left, so here they are. Great looking ships, not sure how much snapps had been drunk when they decided the turret layout, looks like a Friday Afternoon design to me !


I also had a few Light ships in the box so they got done in this batch, so here is an update on the Germans.

For the British the progress is, 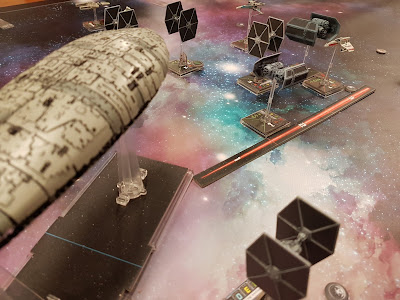 Our forces on Hoth are under attack and the Rebel Forces on the ground are hard at it trying to slow the Imperial advance to allow Transports to escape the surface.

The Empire has set up a blockade using remote control space mines designed to trap and destroy our ships. Provide an escort for the Transport and see it safely out of the minefield and into hyperspace.

You ships have been fitted with special sensors to overide the Imperial Control of the mines. 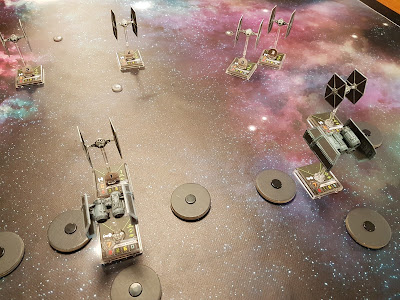 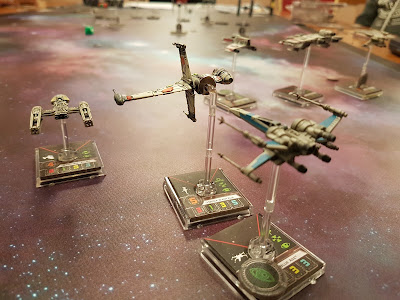 Empire ship selection is as follows,1 Tie per Rebel player, every third Tie will be a random named pilot, all other Ties are random Sqn Pilots (Roll a d6, 1 or 2 PS1, 3 or 4 PS3 and 5 or 6 PS4). Add 1 Tie Bomber with random pilot and then a Tie Punisher (random pilot) for the 4th Rebel player, if you get bigger games add a Tie Bomber for the 7th Rebel player and every 3 there after.

Load outs are as follows; 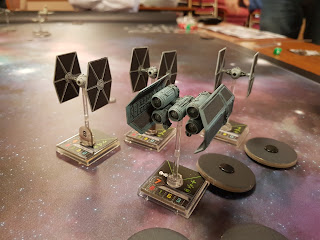 Rebel Players set up the transport in the top left corner of the table with all rebel players within range 2.

Set up 6 counters using the reversable Imperial / Rebel counters, Imperial side up as shown on the plan forming a corridor from one corner of the table to the other.

Game lasts until one side secures victory or the end of turn 8 when the Transport will jump to safety. 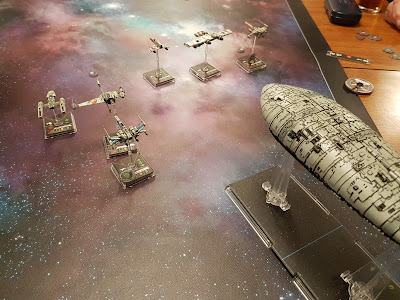 Mine Control - All mines start off under Imperial Control however this can change.

In the activation phase a ship can use an action to change control of a mine, simply flip the mine over to the new controller. Mines can change ownership any number of times in a turn. To change control the ship must be within range 1.

In the combat phase a ship can sacrifice a Focus or Dodge token to detonate a mine, you must have control of the mine and be within range 3 of it.

Mine Detonation - There are 4 types of mine, they are determined at random and just to spice things up a bit the type is not decided until it explodes ! Determine the type at random with counters or dice. Mines detonate when the phasing player declares the detonation in their firing phase.

1) Explosive Mine - Straight Forward bang, roll 1 d6 on a 5 or 6 the mine is super size. Each ship within range 1 of the mine is attacked with 3 attack dice, range 2, 2 dice and range 3, 1 dice. No dodge allowed. Super size mines are double damage.

3) Ion Mine - Add a Ion counter to the 5 nearsest ships to the mine (within range 3), if there aren't 5 ships go back to the one nearest to the mine and start again, repeat until all 5 counters are used.

GR-75 Transport - Dont bother with energy allocation etc, the ship will travel in straight line between the mines (as it winds up its hyperspace drive), the ship will take 8 moves to get from corner to corner at a constant speed. 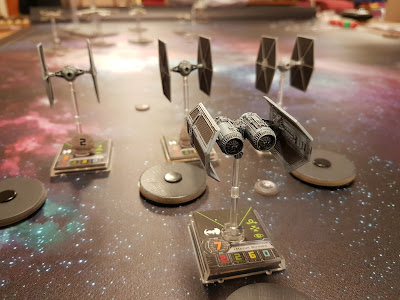 Initial success went to the Imperials in what would turn out to be an extremely close game, initially I thought the Imperials would struggle, then it looked like an easy win, then it swung back to the Rebels, it was one of those games.

There must be a big target painted on the K Wing as it got another kicking this evening, end of turn 2 it was in the wrong place and got a round of missiles from the Tie Bomber and some Tie lasers, then it ended up in a crossfire of the Bomber and the Punisher and was hit again, it managed to use the SLAM action to its advantage though and managed to escape into hyperspace with one hull point left.

One of the crucial points of the game came on turn five when the Imperials decided to set off two of the mines in range of the Transporter, the risk was lots of their own ships in range of it, one mine did some bits of damage but the other one was a stress mine, lots of Ties with stress.

Another mine was set off by the Imperials the next phase and it was another Stress mine, queue lots of Ties with lots of stress, I really though the Imperials had lost it at this point.

On the final turn the Punisher fired first and took out the Transport and that was it end ex.

So an extremely close game, no Rebels were shot down but both the K and E Wing were down to 1 hull point when they punched the hyperspace button. 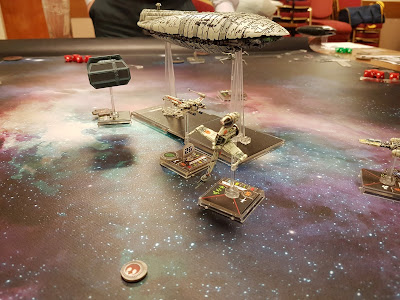 X Wing madness will return with game 26 on the 26th of May 2016 when a day trip to Alderaan goes very wrong. 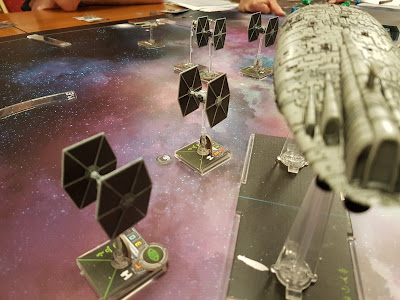 Pilot upgrades prior to start of game 25


Spike Sharpie bought a Z2-K8 Droid for his E Wing 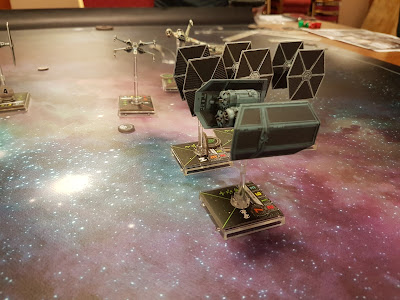 Welcome back ye followers of Project Jutland, last week saw me finish off the last nine of the British Battlecruisers and Dreadnoughts for the game, 24 of the main battle line, the 4 15" Fast Battleships and the 9 Battlecruisers all done ! An ongoing 6 mm WW2 game has been hogging the table for a couple of weeks delaying the photo session.

The final batch consisted of those 4 Fast Battleships, HMS Canada, 3 Iron Dukes and a rogue HMS Indefatigable, who somehow got missed on the first pass.

What was slightly different with this batch was that all but one (Canada) was from the US company WTJ, very different to the classic cast metal kits GHQ provide, they are effectively printed (the lovely owner of the company did explain exactly how they were made but my eyes glazed over !). 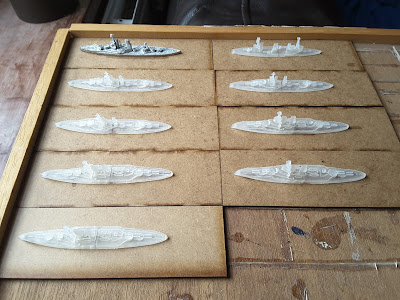 The above photo gives you an idea of what they look like when they arrive at your door. No fiddly build stage just straight glued to their base. I give them a bit of a scrub in soapy water before priming them but I have never had any problems with paint lift and importantly no breakages of guns barrels etc. If you haven't already seen WTJs stuff I did a review and comparison blog post HERE. 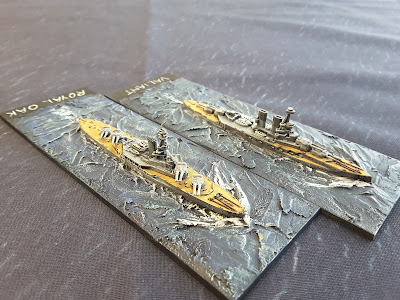 I have included a bit of a comparison photo between Royal Oak which is from GHQ and Valiant which is from WTJ, both great models, more detail especially on the deck with GHQ plus the ability to rotate the turrets. WTJ wins hands down on price though and they really don't look out of place next to each other, some of the other manufacturers in this period and scale have very little detail and to me are just recognition models. 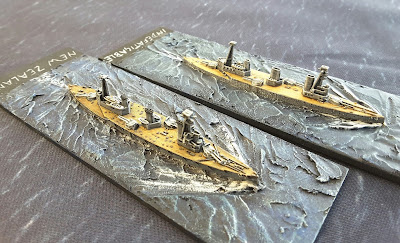 Here we have the Indefatigable from WTJ next to her sister New Zealand who is a GHQ model. The comparison is the same as the 15" ships above, less detail on the WTJ but still a very acceptable model.

The last ship of the batch is this beauty from GHQ, I really like the way this ship has turned out, can't put my finger on why I just like it. 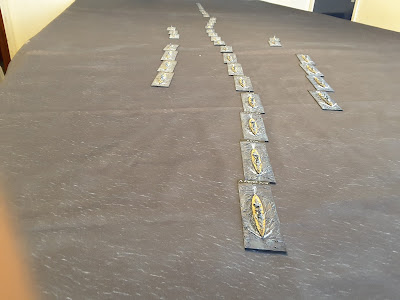 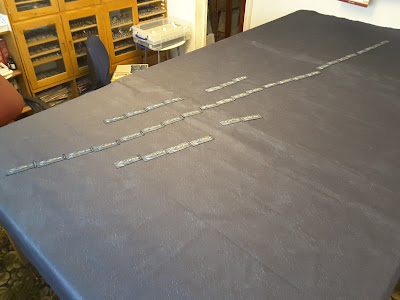 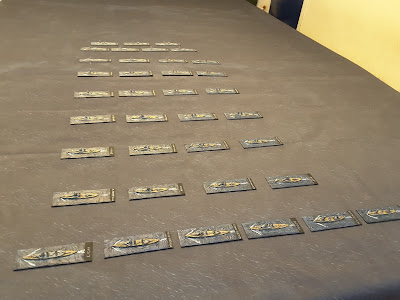 So there you have the meat of The Grand Fleet, Armoured Cruisers and Light Forces to complete but this is the fighting end done. For scale the table is 12 x 6 and as you can see with bases touching the battle line only just fits.

Project Jutland is on a slight hold at the moment, my German pre Dreadnoughts have arrived as have a batch of light stuff from GHQ however 6 of the remaining German Big Guns were out of stock so I will have to wait until they arrive. I was going to crack on with the light stuff but realised I had run out of bases, more have been ordered from ERM but I will have to wait as Tony is having a well deserved week off. 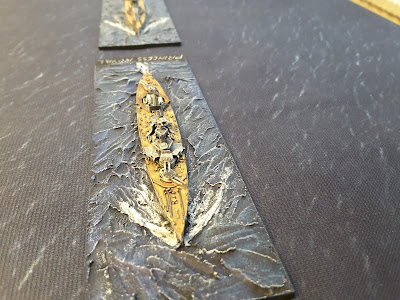 With all the Jutland excitement I have neglected our WW2 Baltic Campaign so I will get back to that this week.