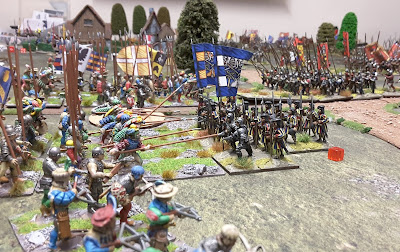 Regular readers of the blog will be aware of the last large project I embarked on, 28mm Italian Wars. It went remarkably quickly and I managed to plough through a big chunk of figures during the 2018/19 Analogue Hobbies Winter Paint Challenge, producing a pretty large Papal Army in the process. The figures went on to win the Challenge Choice Award, which was nice.

So over the last few weeks the collection has been out on the table getting to grips with some rules and getting a new period up and running here at Yarkshire Gamer. Along with my figures, regulars Harry (with his large French contingent) and Steve with his Landsknechts added to the weight of the table.

There wasn't much of a plan to the game, on the usual 12 x 6 table I set up a symmetrical layout with a couple of built up areas and some trees and lined the troops up ready to go.

Our troops are based on 60 x 50 bases, 8 Figures on a Pike base, 4 on a shot base and 6 on a "other" base (Sword and Buckler, Polearm etc). Cavalry is on a 50 x 60 base with two figures per base. This isn't for any particular rule set, it looks right to us and any rule set we use will just be adapted to this basing (I don't rebase !).

So our chosen rule set for our playtest is Furioso, they are avaliable from Alternative Armies for £10 as a Pdf. Link below.

The company also do an additional supplement specifically covering the Italian Wars adding Mercenary Units etc but we didn't use that in our initial game so I won't comment further on that now.

Just to give you an idea of the forces involved they were as follows,

With chucking everything on the table (and why not !) We didnt use the Army Morale System in the rules as we were about 3 times over the sizes mentioned, nothing like a "small" game to start with !

We didn't use the Generals rules (other than plus 1 in Combat Morale if in range).

So let's move onto the rules themselves. I am going to do a seperate post with some video examples of the mechanics of the rules just waiting for Speilberg to come free to finish the edit.

Firstly some basics, the rules are relatively straight forward and all units are in "bases" - each base having 4 hits before it is removed, units are built up of numbers of bases. Our figures are set up differently to the rules so we just played with the number of bases we had per unit and it worked fine. All die rolls are d6 and all rolls need a 5 or 6 for a success, so very easy to remember.

Each unit has a stat line to define it's character, they are as follows,
Type - e.g. Gendarme, Raiders etc this can give the unit a special ability for example units fighting Gendarme lose 1 d6 in combat if the Gendarme charge.
Tactic - Galloper, Skirmishers etc
Combat Factor - Base number of Dice per base when fighting (2 to 5)
Initiative Modifer - as it sounds
Weapon - defines type
Armour Class - None, Armoured, Heavy, Extra Heavy
Move - basic in inches (for 28s)
Size (suggested number of bases)
There is also a points value but as you know I hate points systems so this was immediately discarded !

We (as usual) ignored the set up rules and just got on with it.

At the start of each turn each unit rolls 1 d 6 and adds (or subtracts) their Initiative Modifier from their stat line and that determines when they will move in the turn. We simply left the rolled dice at the rear of the unit as a marker to remind us of an initiative score.

Units such as Gendarme and Swiss gain +2 to their roll, if the net score goes over 6 the unit become Impetuous and charges of at the nearest unit, much as those units did if they thought the Commander was being a touch cautious.

Impetuous units remain so until they get into melee or fail a morale test.

Units with an Initiative of zero don't move or fire but can defend themselves in melee.

Each unit completes it's turn with the highest dice going first. So all Impetuous first, then 6s go then all 5s etc.

If a unit choses to move it's move distance is it's base move from its stat line plus it's Initiative Score, so a Gendarme moves 8 inches normally, if it had a 5 for initiative it would move 13 inches, simple really.

Each side should move one unit and then the next side and so on, I could see how over a club night table this would work fine but over a large table it became restrictive so we just broke the table down into areas of action and moved units in sequence in that area.

Each unit completes it's turn before moving onto the next unit. 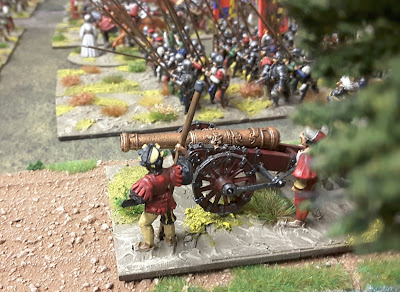 It's wouldn't be long before we introduced a house rule (it never is !) We found that there was a problem when you have units in consecutive lines (Cavalry mostly) when the units in the rear end up with higher initiative than those in the rear, because of the move system the unit at the rear was effectively stuck and was therefore at a disadvantage due to it's higher initiative. We solved the problem by allowing units to exchange their Initiative dice front to rear, the payment for doing so was reducing both dice by 1.

So a stationary unit of Landsknecht Shot with 4 bases firing at a unit of Gendarme with at short range would throw 8 dice, let's say for 3 hits. The Gendarme would throw 3 save rolls for the hits, plus 3 dice for their armour, - 1 for the fact they were fired at by a gunpowder weapon giving 5 dice to save 3 hits. Remember each base has 4 hits before it is removed.

Nice and straight forward and picked up in a couple of moves.

We added our second house rule for Mounted Crossbow and Bow, reducing their ranges. It's open to historical debate but I am in the "crossbows were used from horseback" camp, but they used a latch type loading mechanism which would give less draw weight and hence less range. So our house rule fitted that.

The other thing we weren't sure on was the basing for shot troops, skirmish units are in three bases, side by side which is fine, but formed shot is in 4 bases, 2 x 2 which to me doesn't look right, we have left it as is for now but might come back to that.

Combat is based around the Combat Factor of each unit, each base in contact generates dice equal to the CF of that unit. So a French Gendarme unit with a C.F. of 4 will generate 12 dice (for 3 bases) as a start, there are additional modifiers (Cavalry charging get plus 1 to their dice, giving a total of 15 for our Gendarme example, these dice are rolled, with 5 or 6 being a hit.

The unit that has taken the hits gets the opportunity to save, 1 d6 for each hit plus a number of Dice to represent the Armour of the unit, with a 5 or 6 saving.

The outcome of the melee is determined by a Combat Morale Test after the casualties are calculated. This is based on the CF to start with modifiers to the number of Dice for most casualties, losing a base, size of unit etc. Both players roll their dice with a 5 or 6 (as usual) counting as a success. It is the difference between these results that determine the outcome. 1 difference pushes back the loser 1 base and causes 1 casualties, 2 difference, 2 push backs, 2 casualties. Three difference adds disorganised to the losers woe whilst 4 push backs kills the unit.

Units that have a traditional rivalry (Swiss and Landsknechts) can become "Furioso" when close to each other, this drags the units into combat and intensifies the fighting, which is done twice before any Combat Morale is taken. 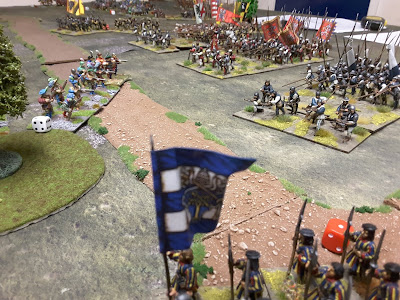 We found that the system worked well but because there is no cumulative effect round to round melees went on until a unit ran out of figures. After the first day playing we decided this wasn't working for us and made the push backs add up, turn on turn, so a 1 push back this turn after a 1 push back the previous turn would count as 2.

Morale is done by a simple test when a unit loses a base in shooting or when a general is killed, the rules do have an overarching morale system which is based on the overall losses but this is designed for games a third of the size we were trying, it's something we didn't use during this play test but will be looked at again, next game. 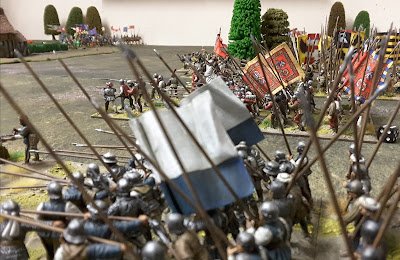 So general impression is very good and we will definitely be using them again. We made a few minor changes but I have to be honest and say that only a couple of sets of rules survive intact after contact with the Yarkshire Gamer ! There are some nice touches in the rules, like hazards (when you throw 4 1's in any roll).

I've done a video run through of the rules which I will put up on the blog early next week.
Posted by Yarkshire Gamer at 09:18:00