I have been building an Italian force for early Desert games (latest end 1941) and came across this unit. The unit was not a fascist militia as such but was recruited through an organisation called the GUF (Gioventu’ Universitaria Fascista). 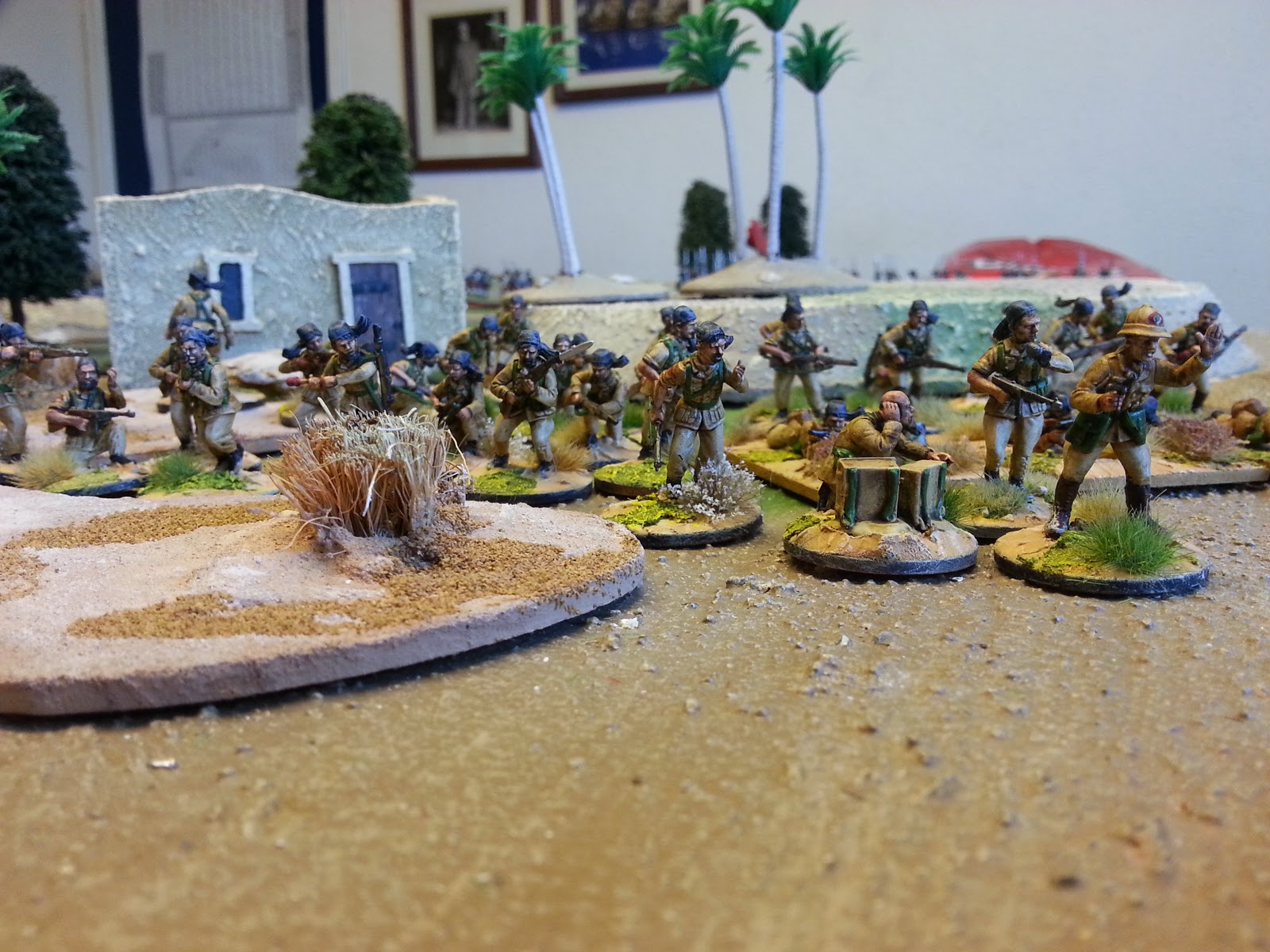 The unit entered the desert theatre in July 1941 and is most famous for its dogged defence at Bir el Gobi in November of the same year. It had an excellent reputation as a fighting force and is something a bit different for the period. They wore a distinctive black stocking cap making them instantly recognisable. 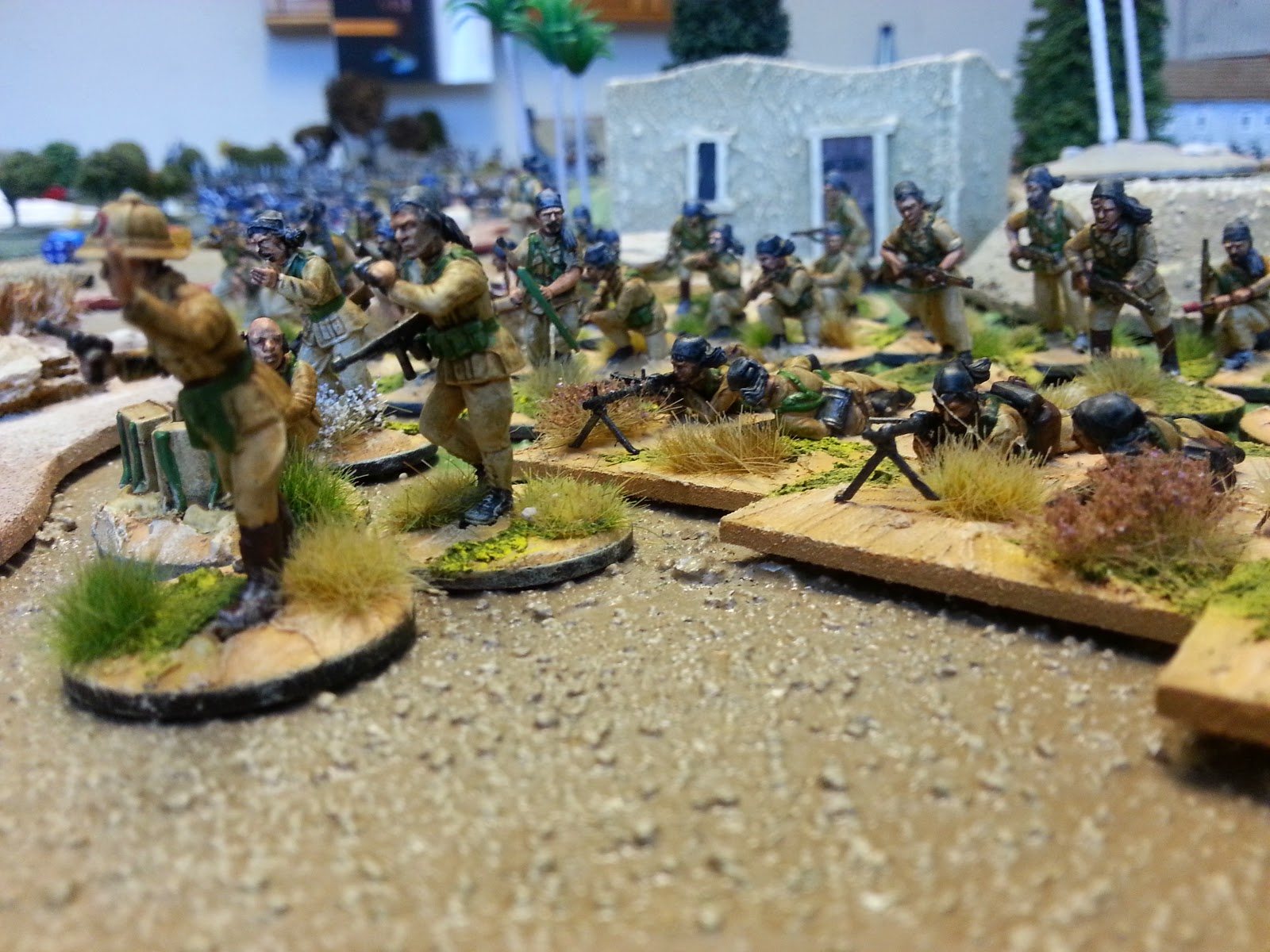 As far as I know no one makes these guys in 28mm so I had to hatch a cunning plan. Modelling has never been my strongest point, I've tried to do a spot of sculpting but its safe to say I wont be putting the Perrys out of work soon. I call these a wargaming conversion, they are mostly Perrys plastic DAK with a straight forward head swap, the donors being from the Perrys ACW Zouave box, add to that some spare arms from the many Desert Rats boxes I have and from a distance in poor light they are spot on. For the purist the belts aren't quite right, the SMGs look suspiciously like Tommy Guns and the Bredas look like an MG34 that someones stuck a magazine on. 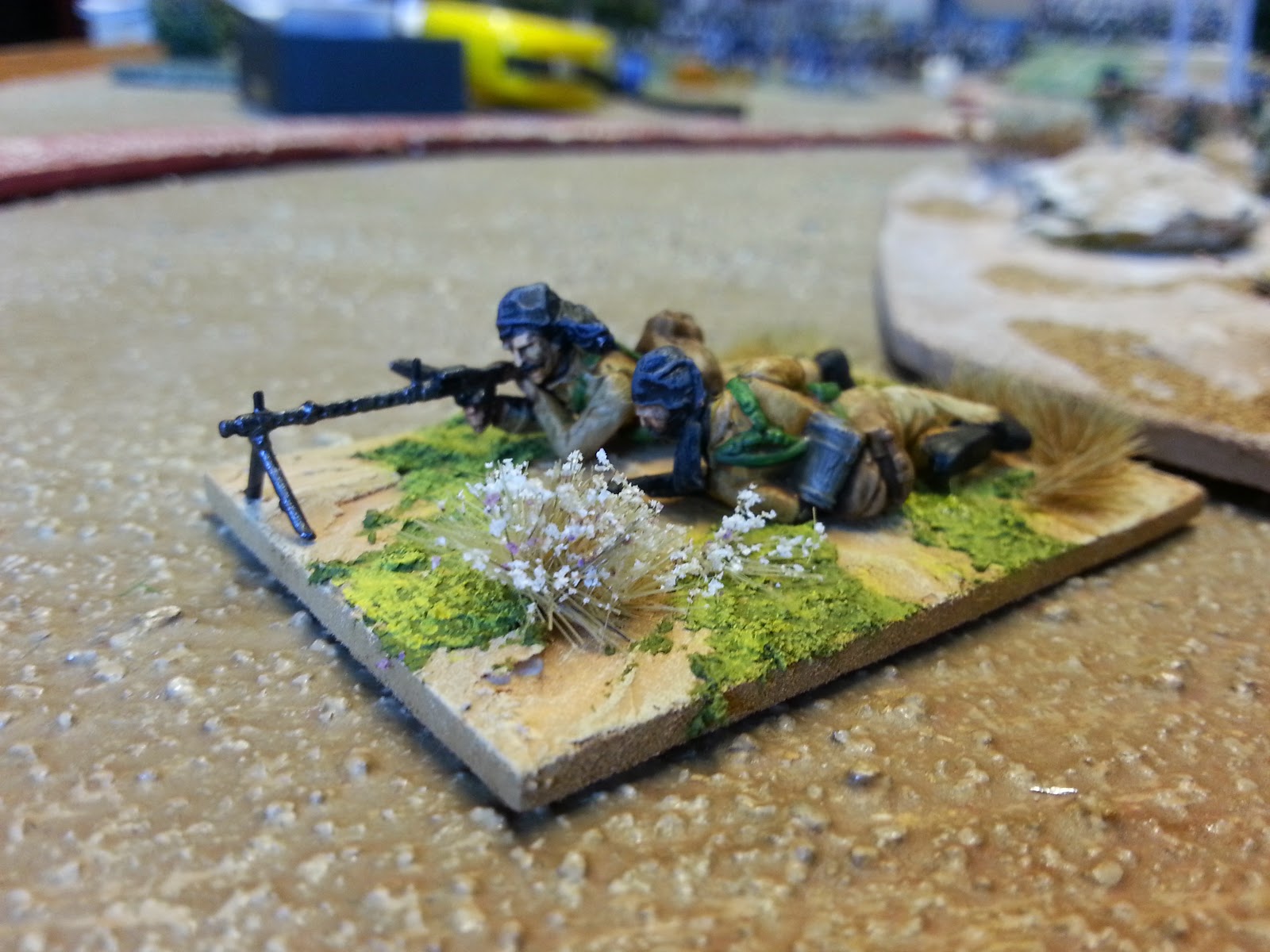 I quite like how they have come out, they will represent a company with our rules and I have enough spare heads (and an spare box of Zouaves with turbans as I dont do 28mm ACW, swapsy anyone ?) to do another company. But I must paint the pile of figures I have before I buy some more, yeah right. 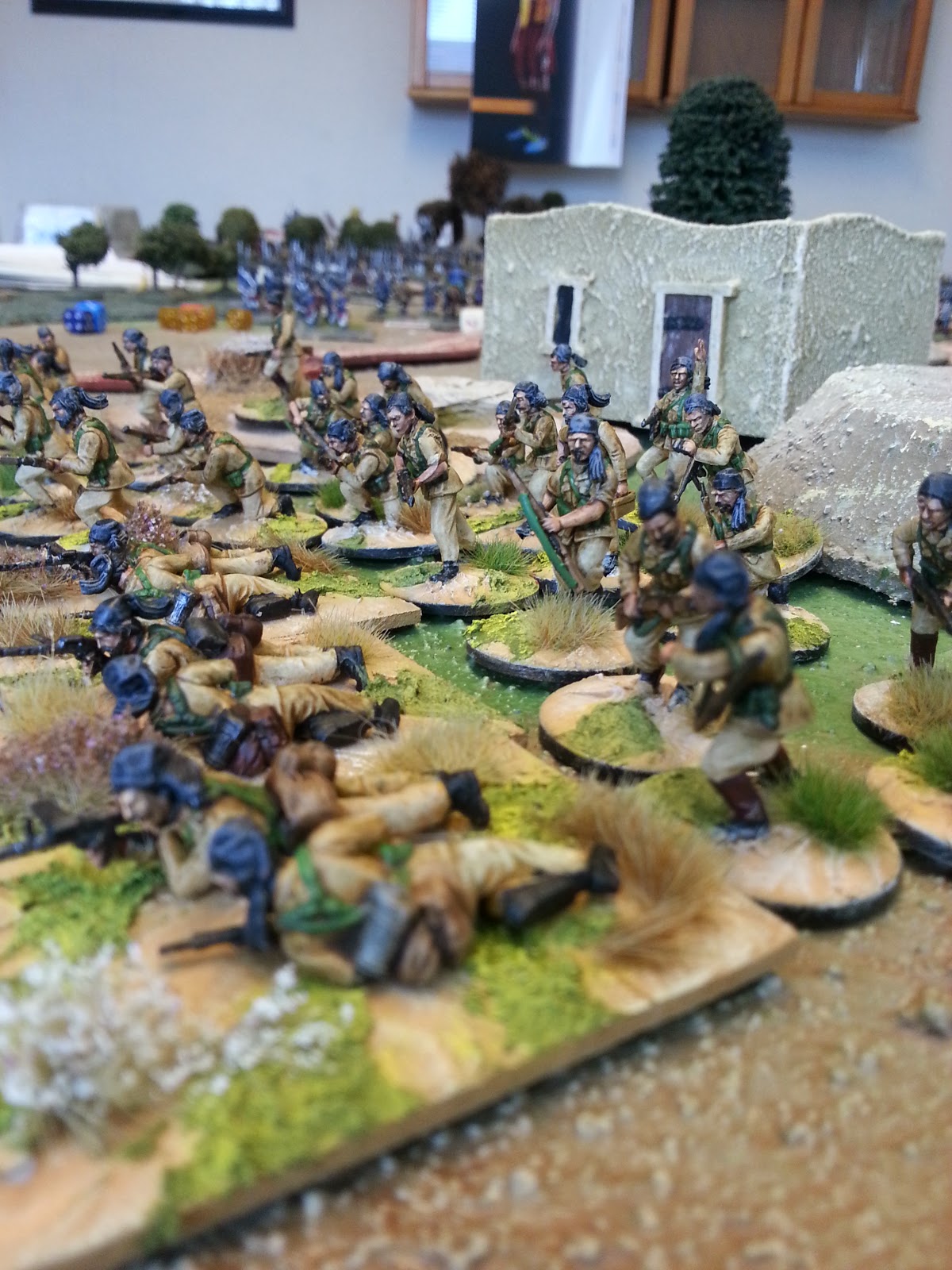 Session one of the game went well on Sunday, we got through quite a few turns and most of the troops are on the table, or in a traffic jam waiting to get on. The Americans randomly drew two brigades to start the game, the blocking force was Durkees Brigade with 3 x 16 figure 2nd class line units and 9 skirmishers, marching on the table were Greene's Maryland Brigade of 3 Continental Battalions. 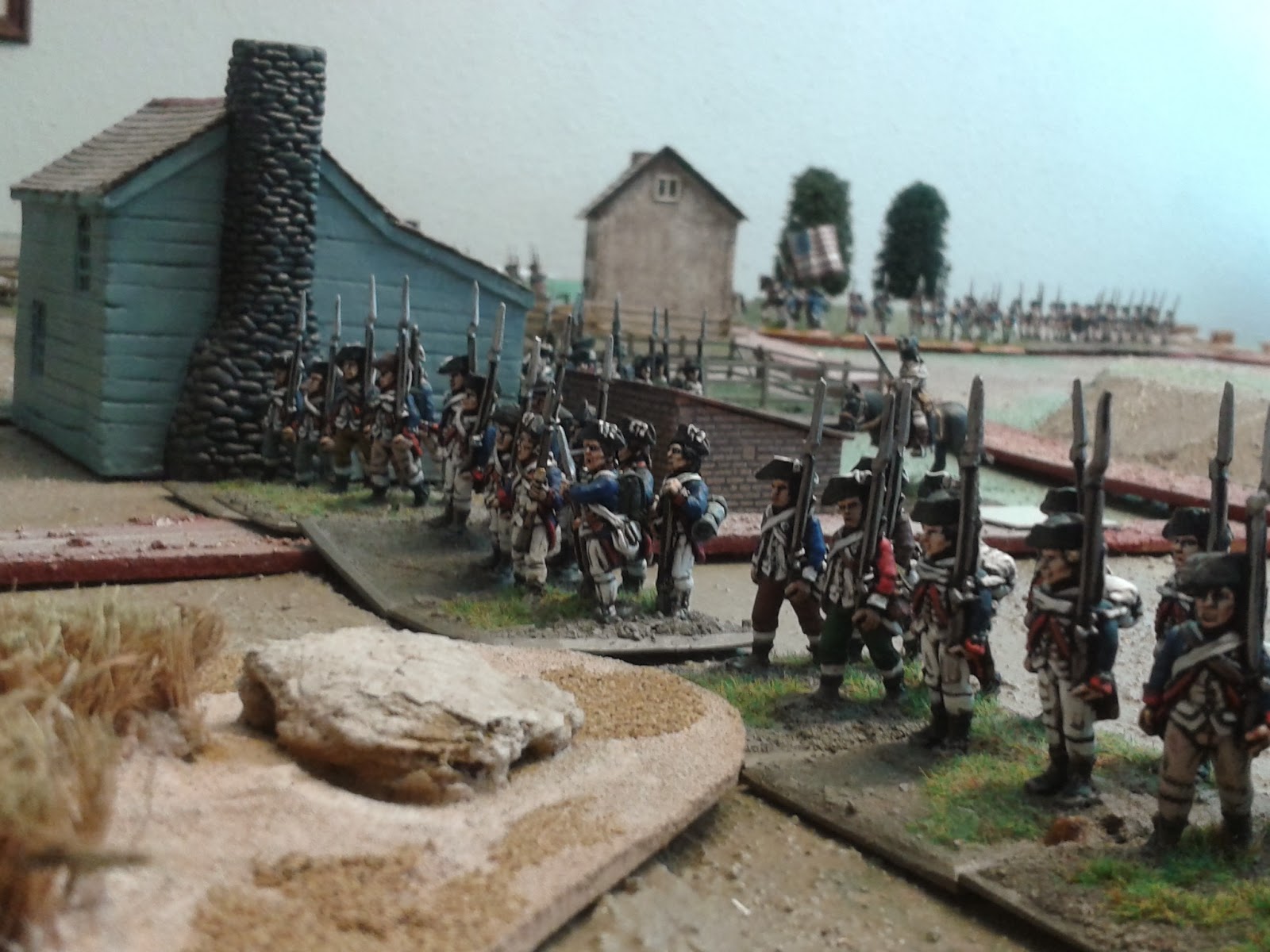 Durkees Brigade wait for the Hessians at the "blue farm", Greene's boys can be seen on the march in the background. 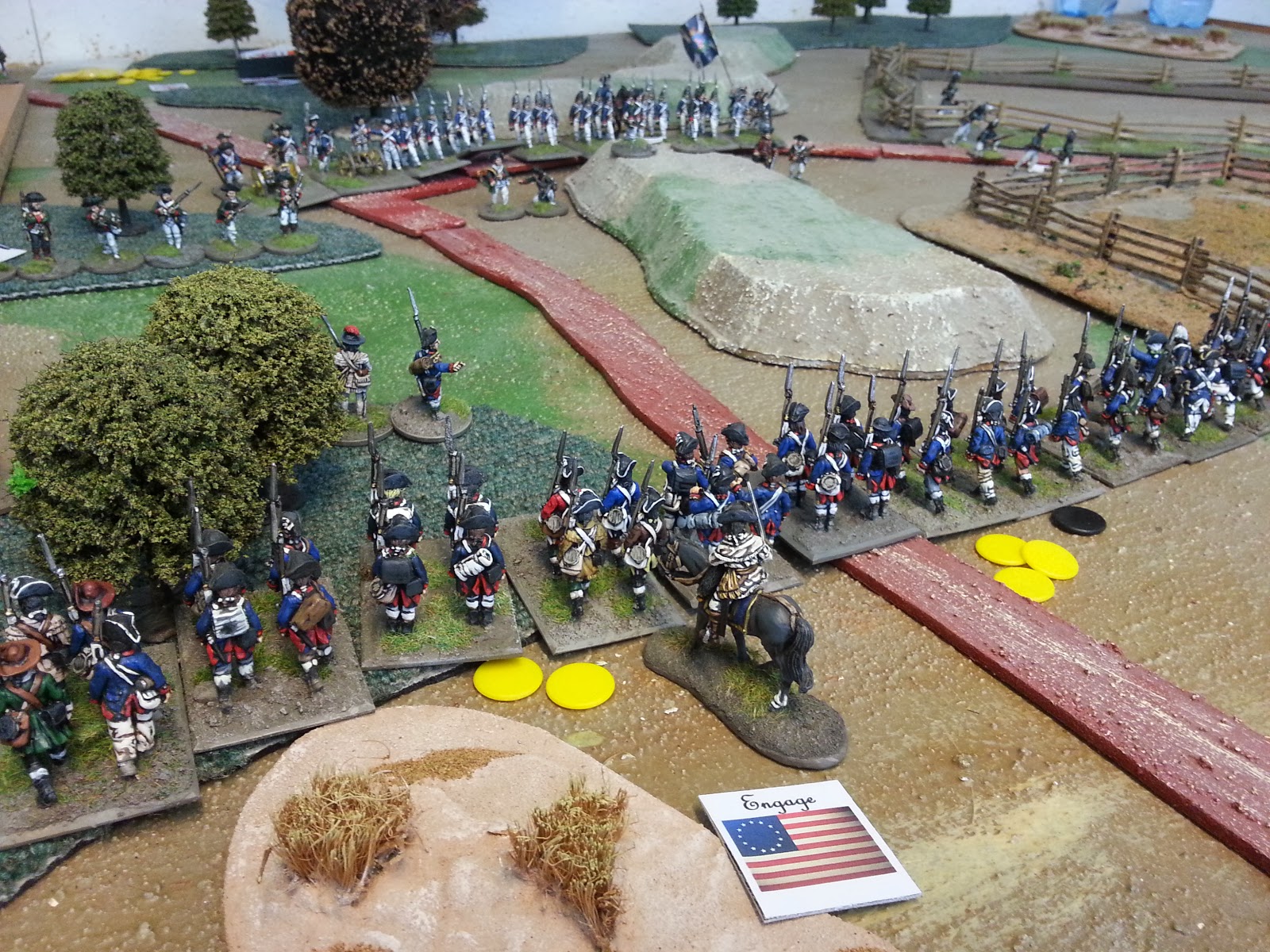 Durkees lads start to take casualties, the first double 6 of the day from the Hesse Artillery, began a theme that was to last the session.

The markers you can see represent dp's or disruption points, the black markers are casualties, also visible is the brigade order marker. For those of you unfamiliar with the British Grenadier rules, units take dp's initially instead of casualties, these come from enemy fire but also from poor die rolls whilst manoeuvring. Once a unit has 3 dp's any further hits from enemy fire cause actual casualties. Units can "rally off" their dp's at the end of each turn, how well they do this depends on their class and their actions in that turn.The dp idea is fairly unusual (those who remember WRG flinch points are showing their age) and gets a bit of getting used to but once you grasp the concept it gives a real period feel to the games. 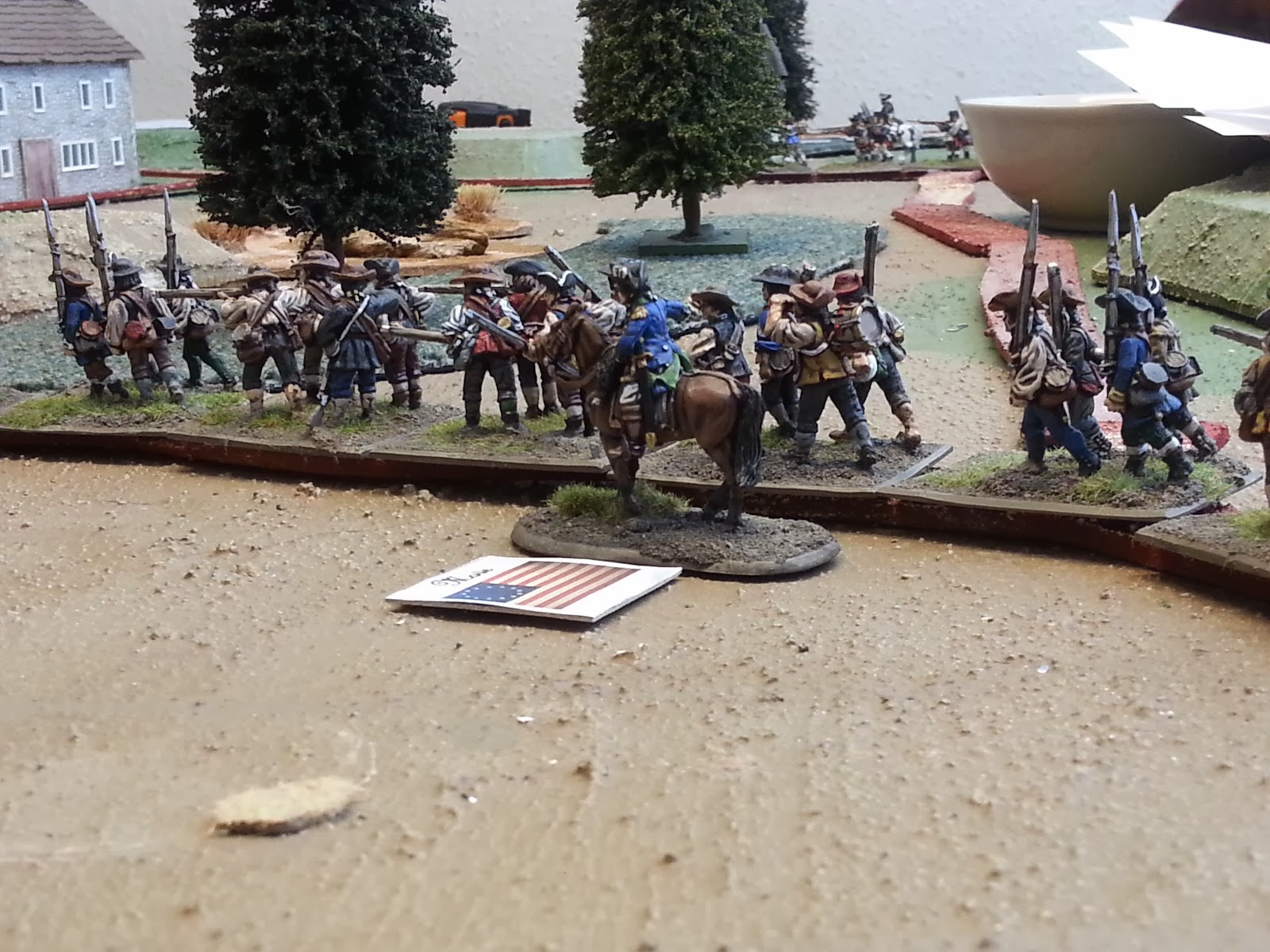 1st to get some more troops were the Americans sadly for them they drew out the larger of the two militia brigades that of Gist. The Americans didn't have too much luck with their random drawing of brigades getting no artillery unit the last phases of the first sessions play. The Brits however had their own problems, great big Hesse battalions marching on in column along a single road sure takes some time, even at the end of the days play the first British units were only just reaching the table. 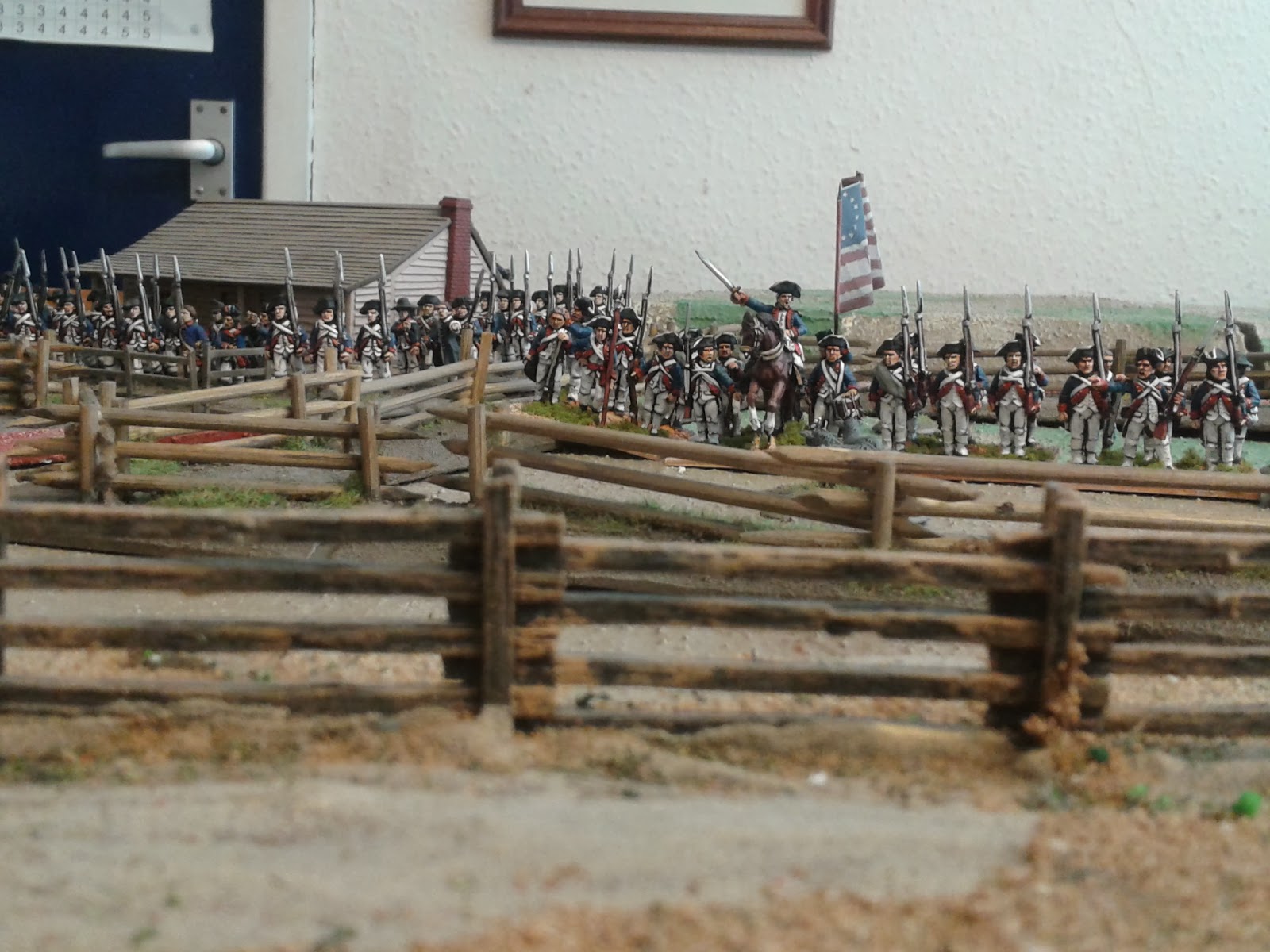 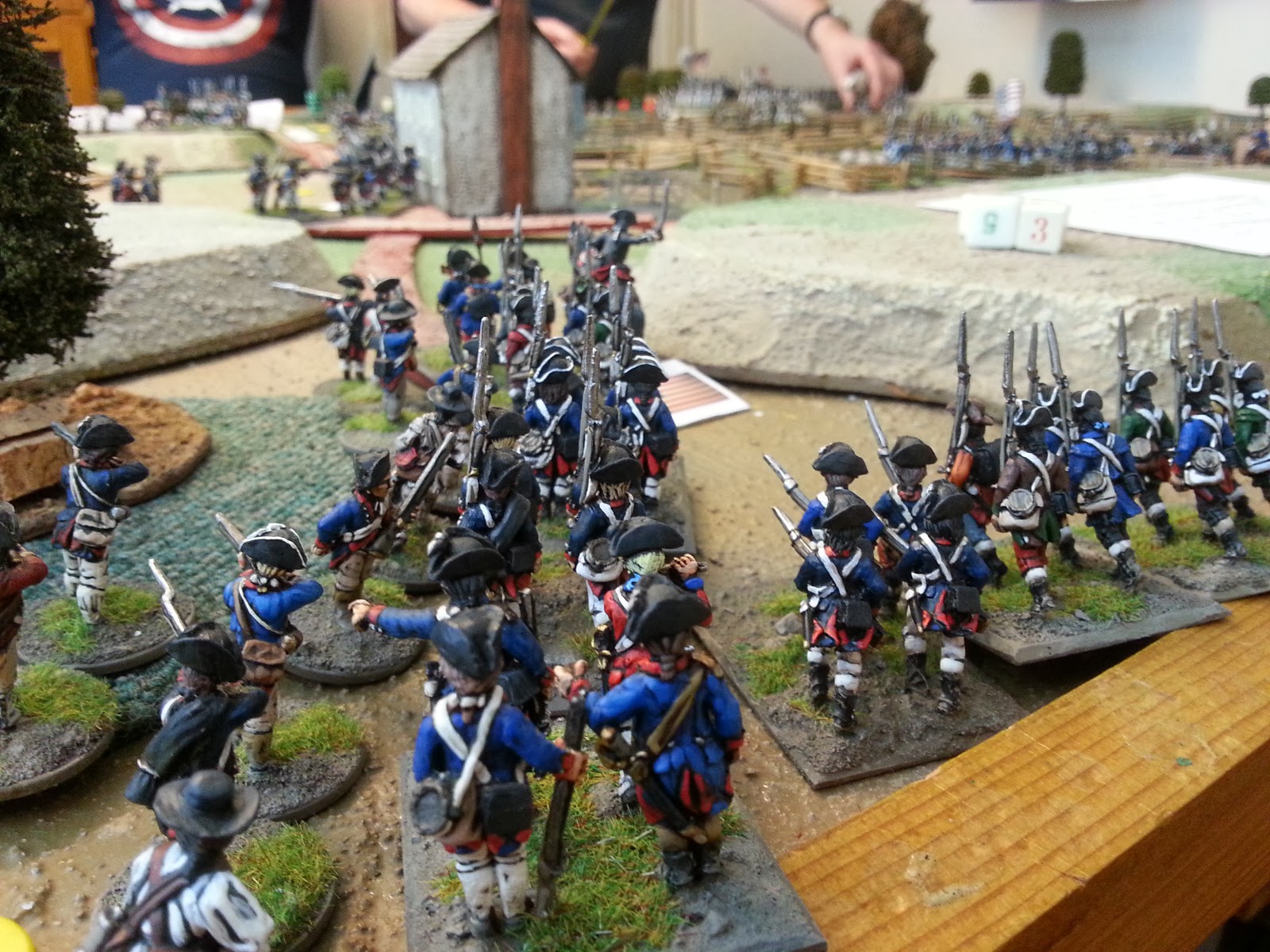 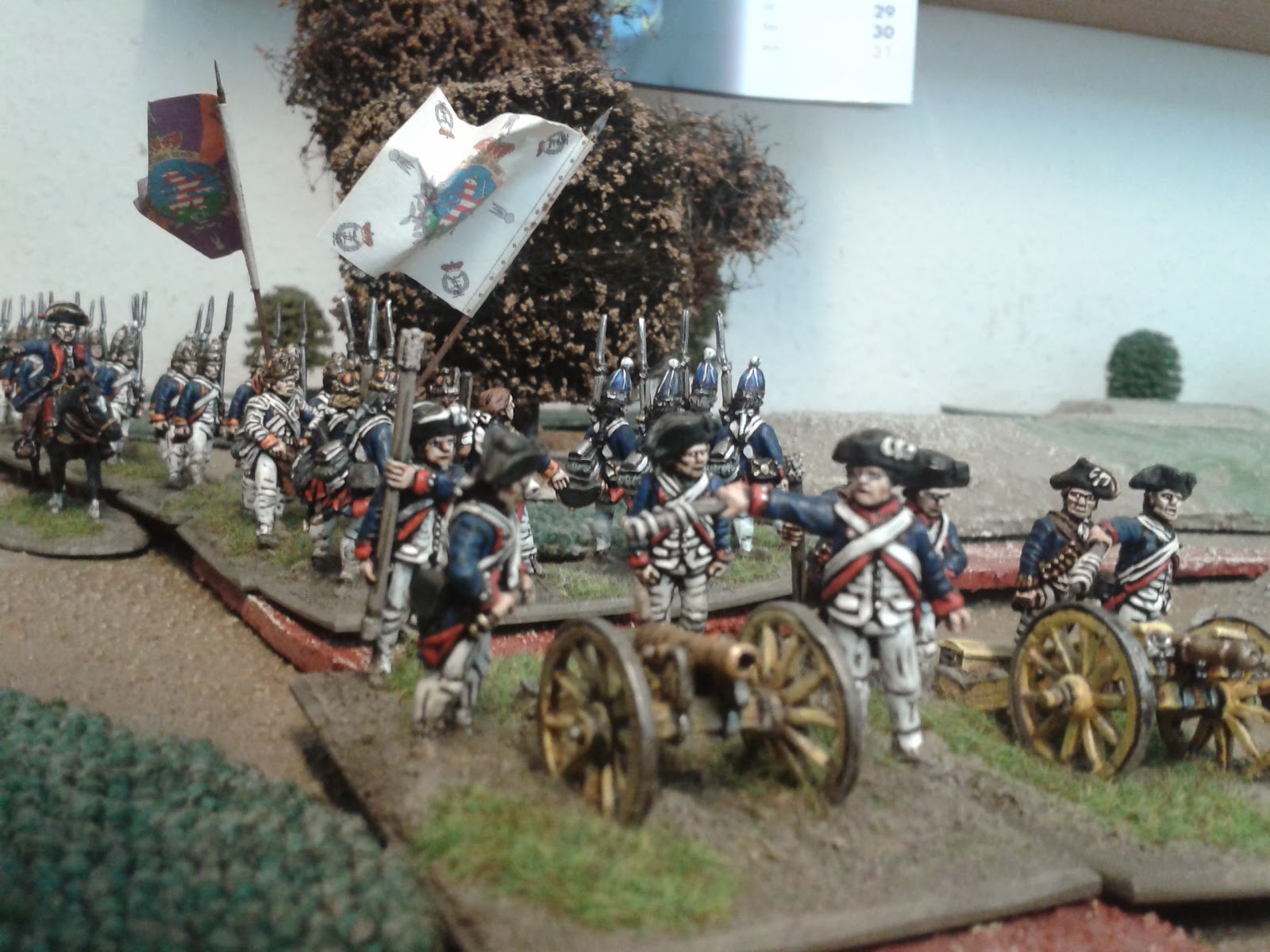 More re enforcements pour in on both sides.

The majority of the fighting took place around the "blue farm" the tide ebbing back and too, the Hesse troops had the edge with their artillery, jagers and tendency to throw double 6, Durkee found himself with a minor wound from an encounter with a Hesse bullet but undeterred he carried on. The "blue farm" changed hands a couple of times, a Hesse Jager Company proved quite stubborn surviving two charges and some poor die rolls before strategically withdrawing / getting booted out of the farm (delete as you see fit ). 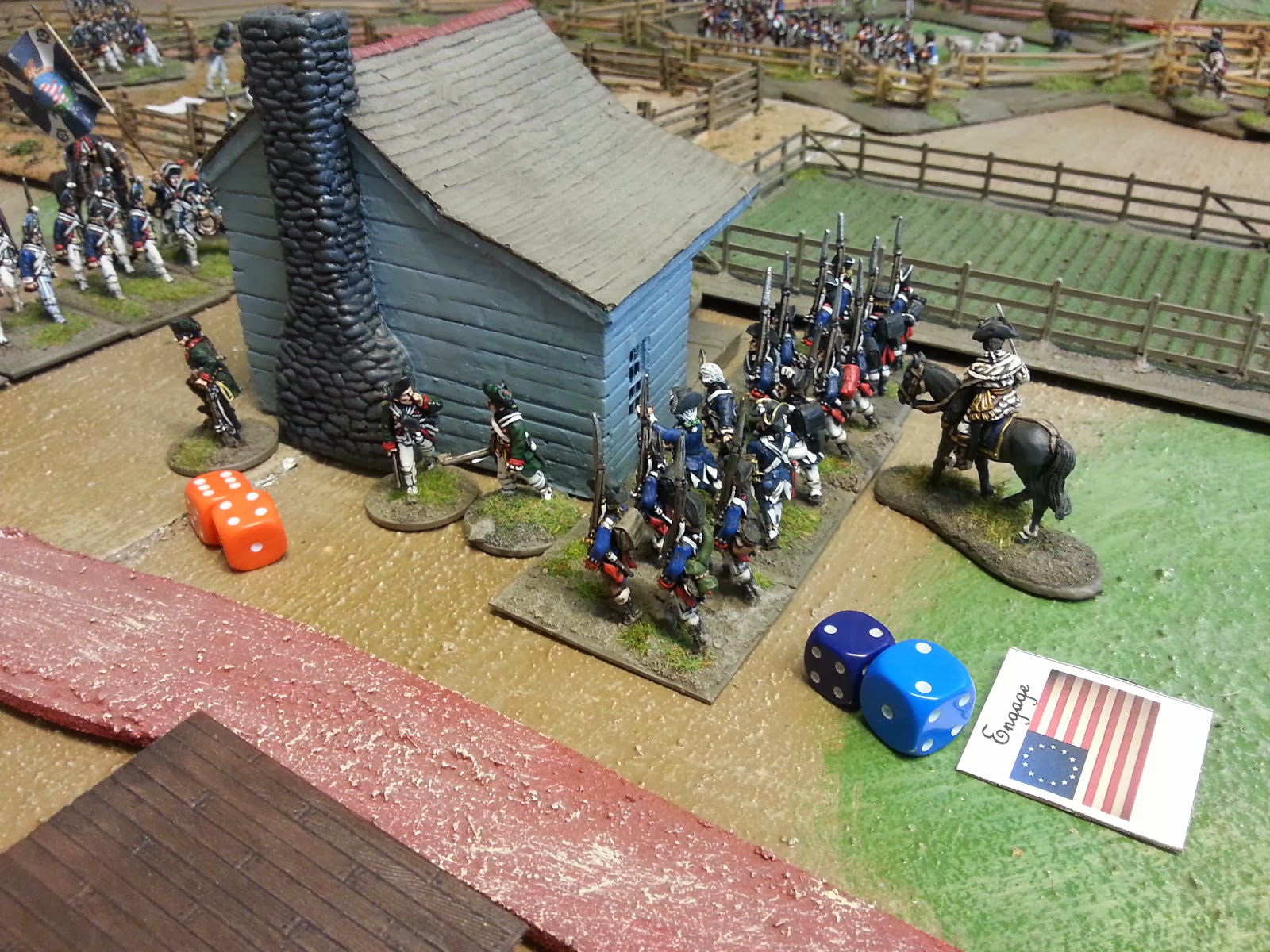 Next round the total die score for both sides added together was 5 ! Lucky blue dice my a•••

The next major action was just outside the "blue farm" with the Americans back in the buildings Irvines brigade pushed forward and caught the Hesse Grenadiers in the flank, they put up a reasonable fight but got routed, leaving the American battalion exposed but victorious. 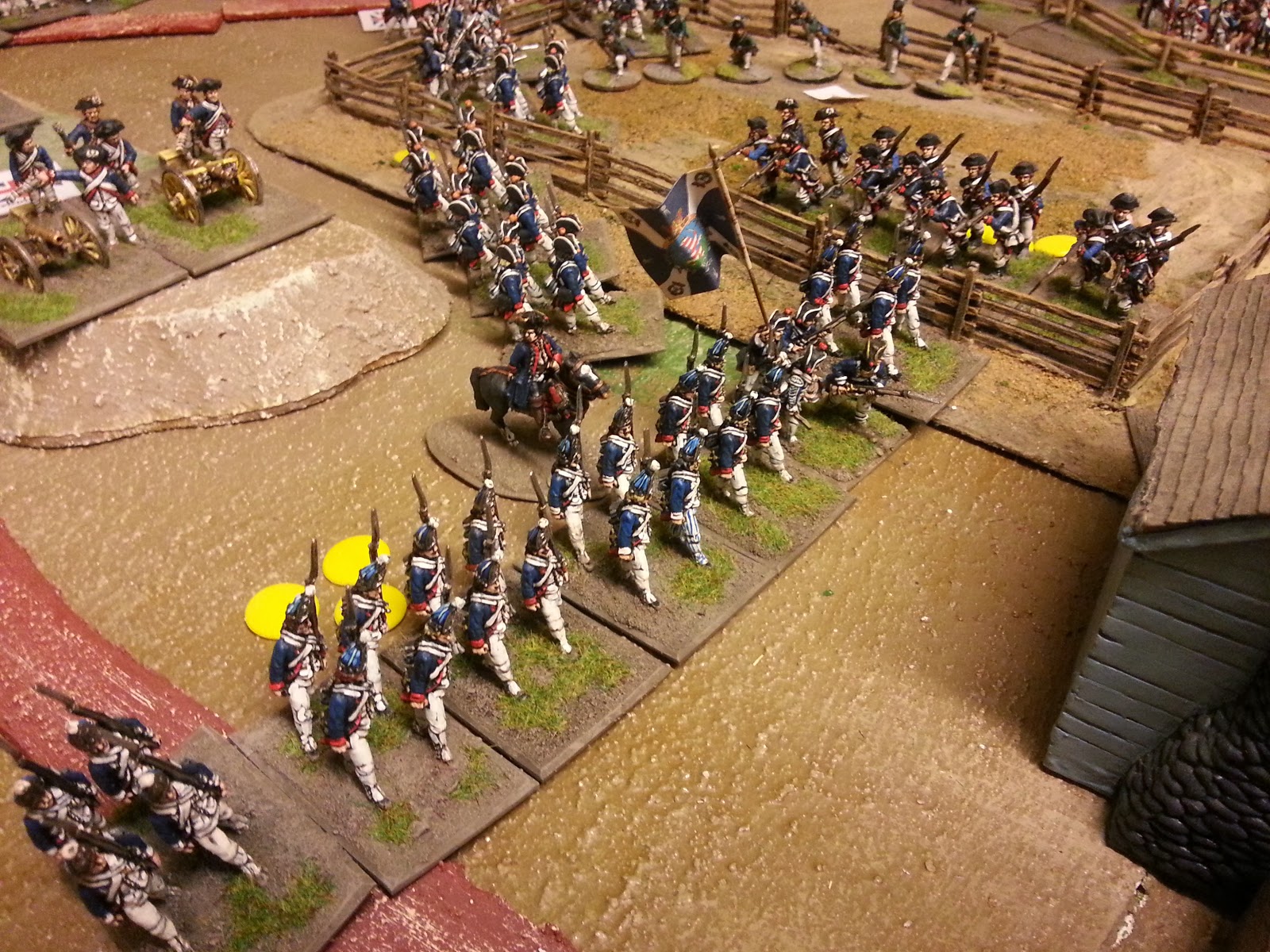 Irvines men teach the Grenadiers a lesson they wont forget.

The session ended the turn after, the Hesse general has one chance and one chance only to rally his troops, cruel to make him wait a week to do it, but we did. 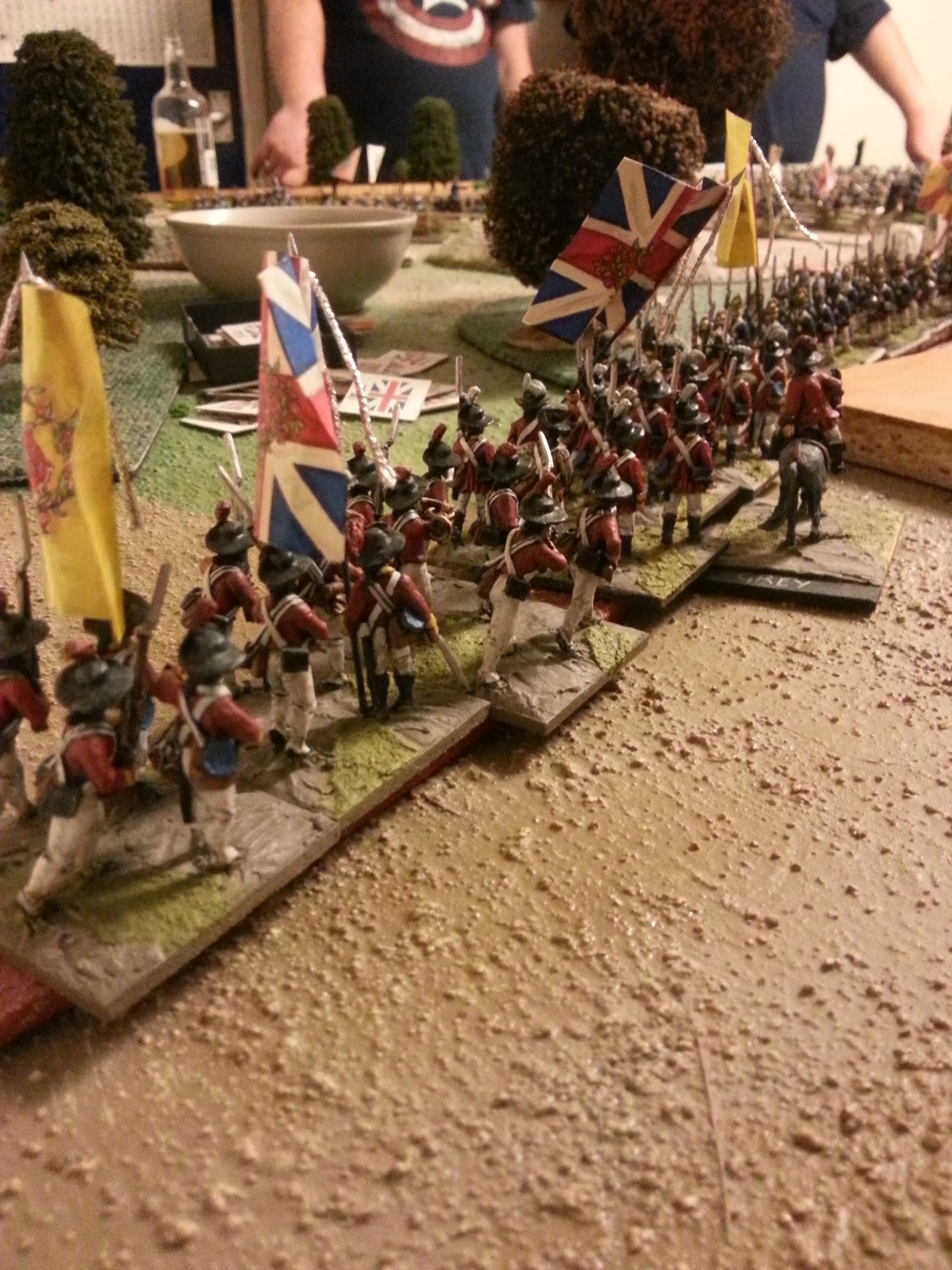 The Brits are here, the author gets to push some lead at last. 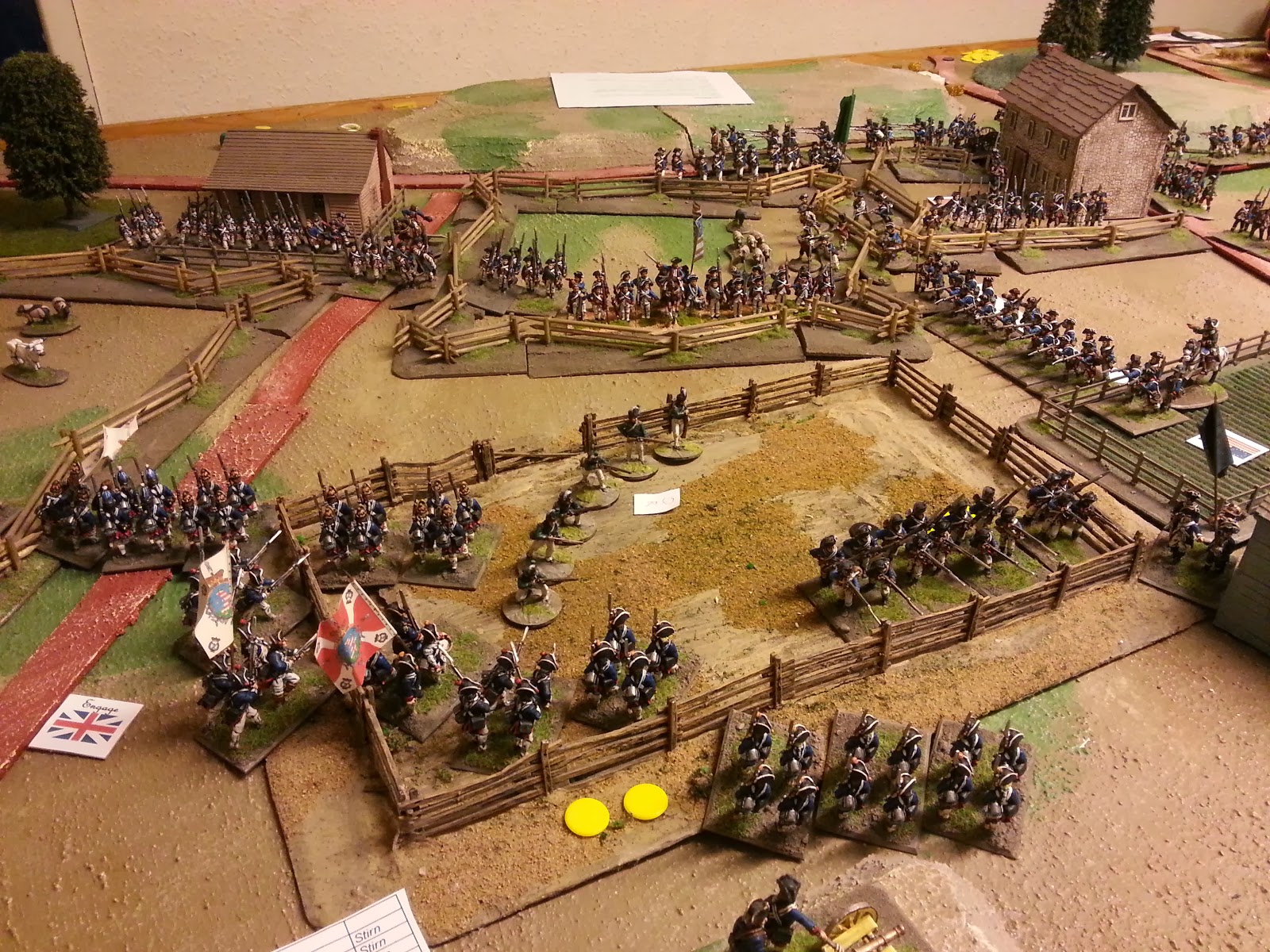 View of the Battlefield at the end of day one, the Hesse Infantry are in a musketry duel around the Northern Farm, the gaping hole where the Grenadiers were is bottom left. 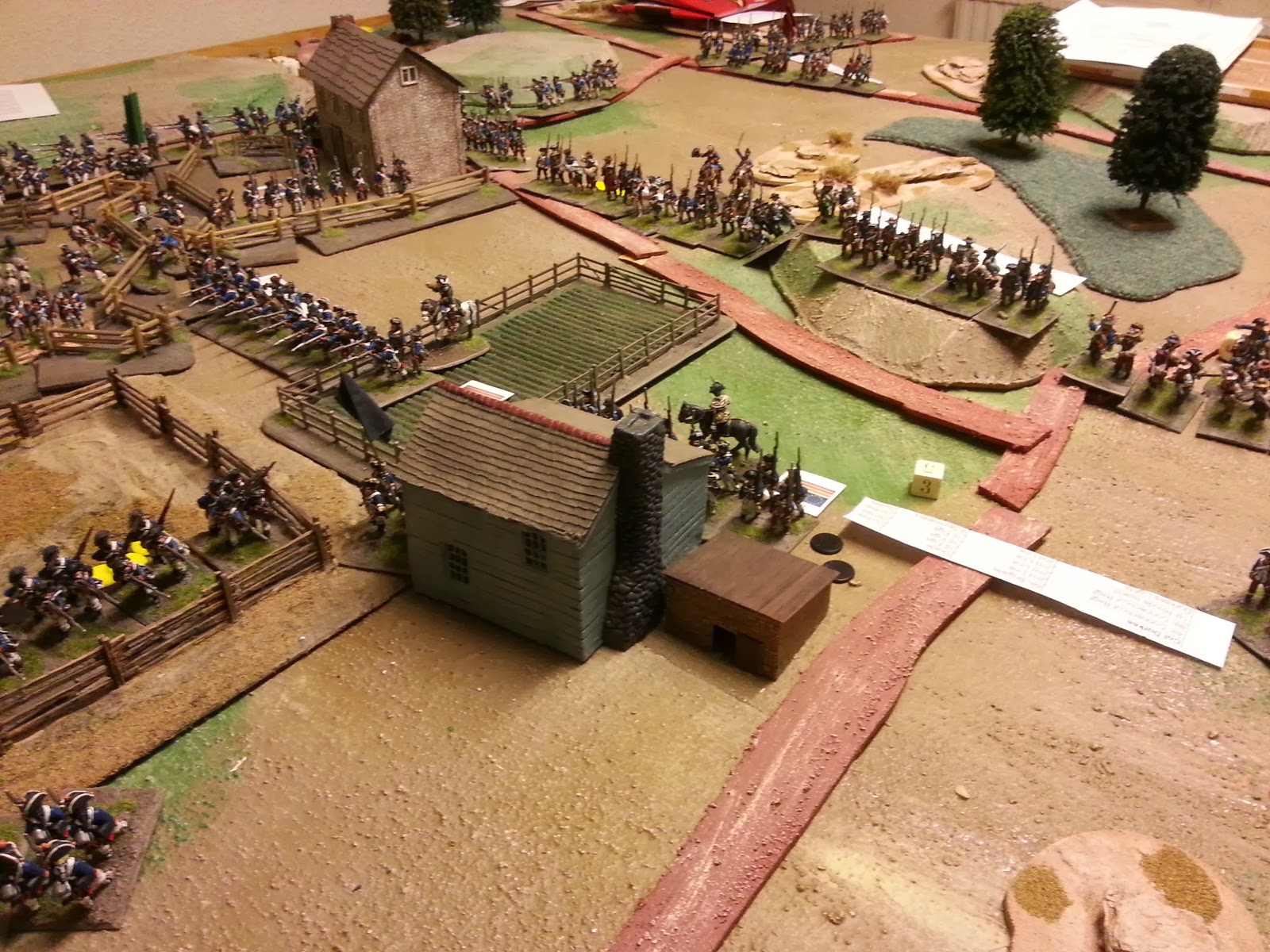 Looking towards the Blue Farm, the Milita have formed a defensive line whilst troops move up in the distance.

Hopefully we will get a session in this week if we can all get together, getting 5 or 6 middle aged wargamers in the same room at the same time is like herding cats.
Posted by Yarkshire Gamer at 17:27:00 No comments:

I first got the idea for this game from this TMP post it was a good size game with lots of commands and most importantly it had some Hessians in, a must for one of our group who is painting all of them in 28mm. We have jigged the orbat round a bit (listed below) to fit in with our collections, really need to get some British artillery done !

The scenario is a British force attempting to out flank the Americans with re enforcements arriving randomly for both sides,  victory is gained by controlling the road junctions.

Rules will be British Grenadier, one of the few sets of rules to survive contact with our group unmodified. Figures are Perry and Foundry, I can only claim credit for the British the rest of the figs are from someone else's collection.

Some AWI games can be a bit tough for the American side, getting mullered by larger better Brits, this game doesn't have any Guards, Grenadiers or Lights so I'm hoping for a balanced game. 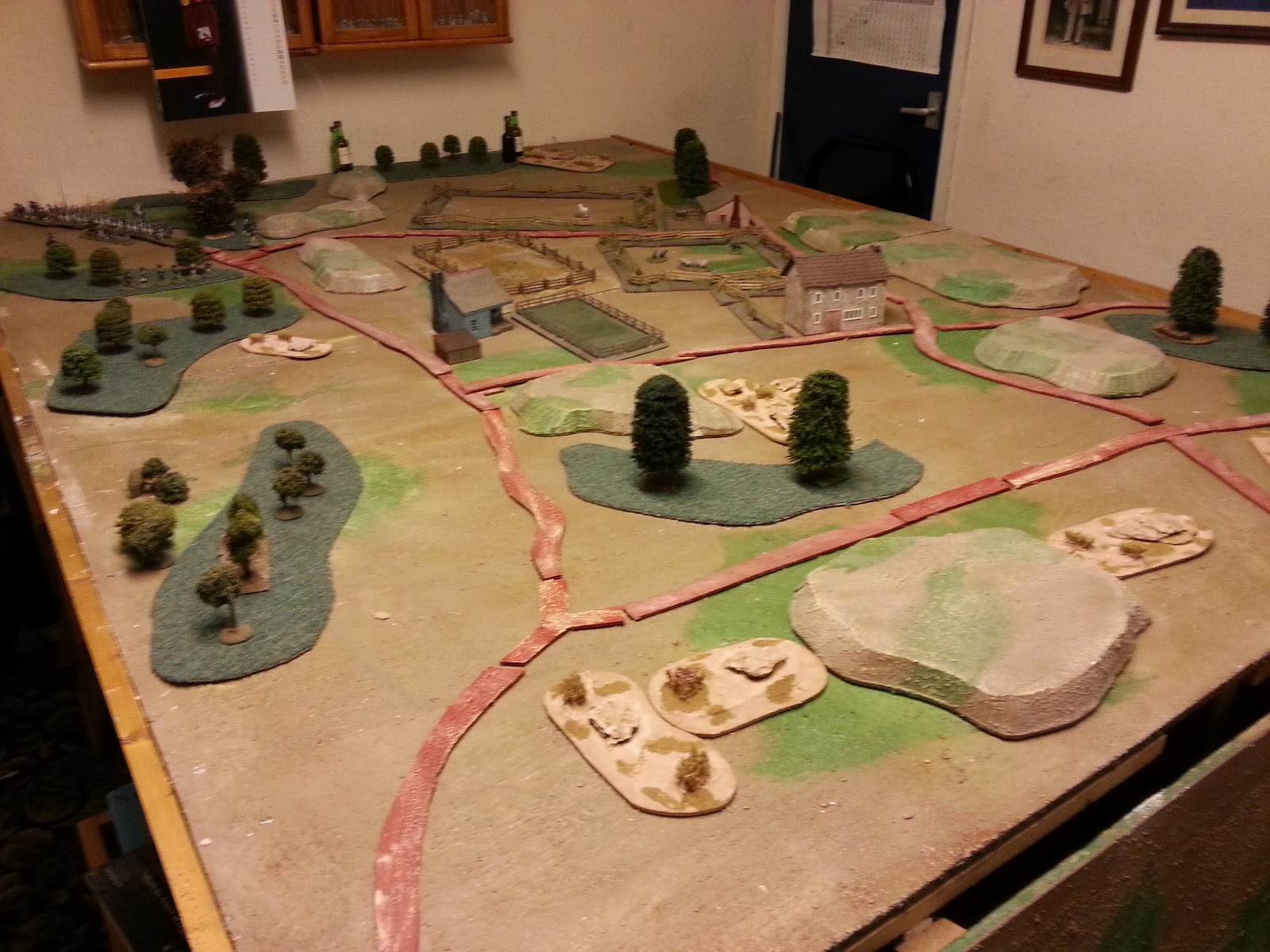 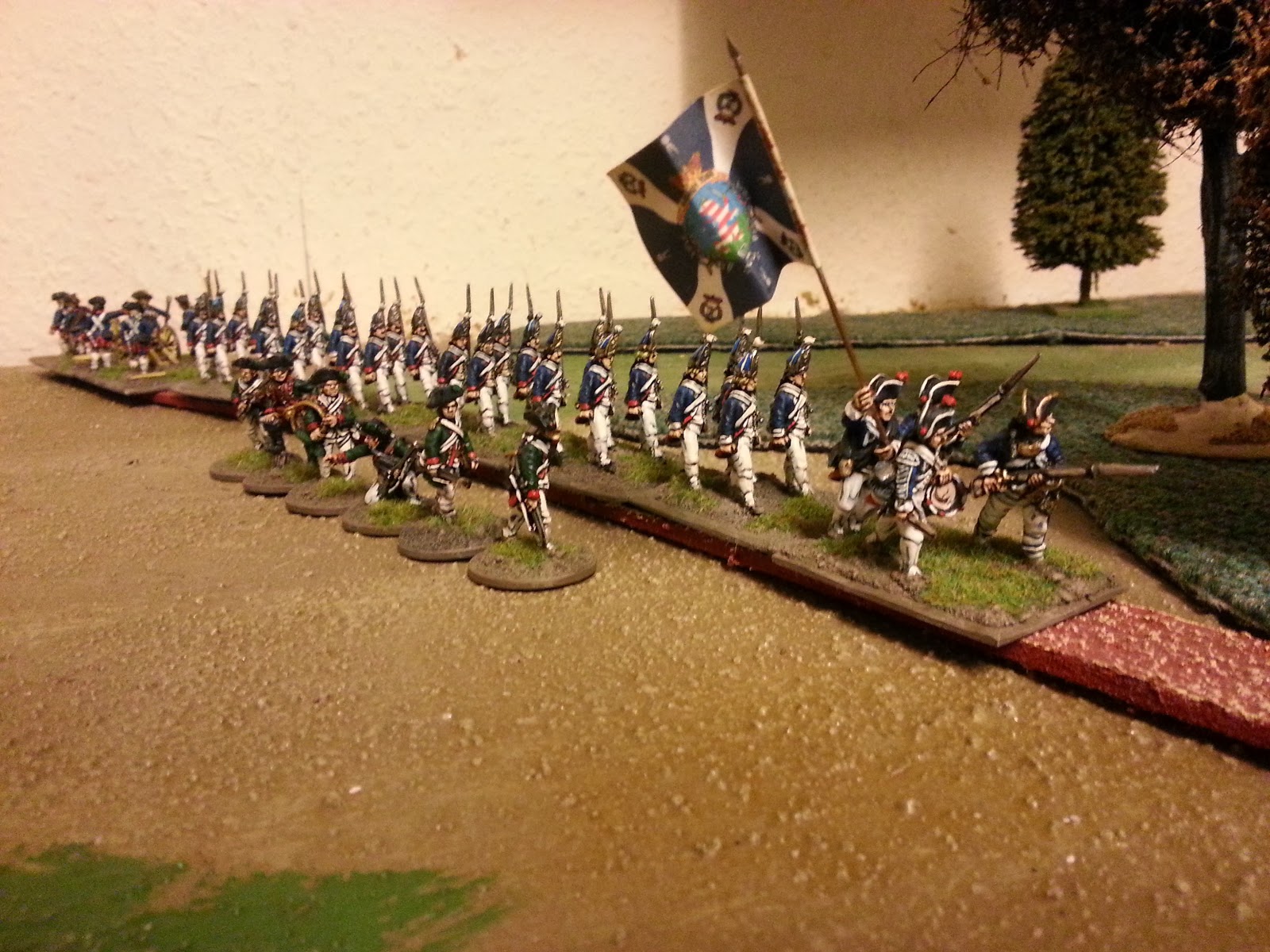 The Hessians are here !

The game will start with the Hessians Advance Brigade marching on, see photos. The Yanks will have two random brigades on table which will be decided on the day. Re enforcements will arrive on a roll of a 6 on a d6 at the end of each turn, Brits get a +1 and +1 is added each turn, the die goes back to 6 each time a new Brigade arrives. Brits arrive in order of march, Yanks arrive in a random order on one of the 4 entry roads to the south. 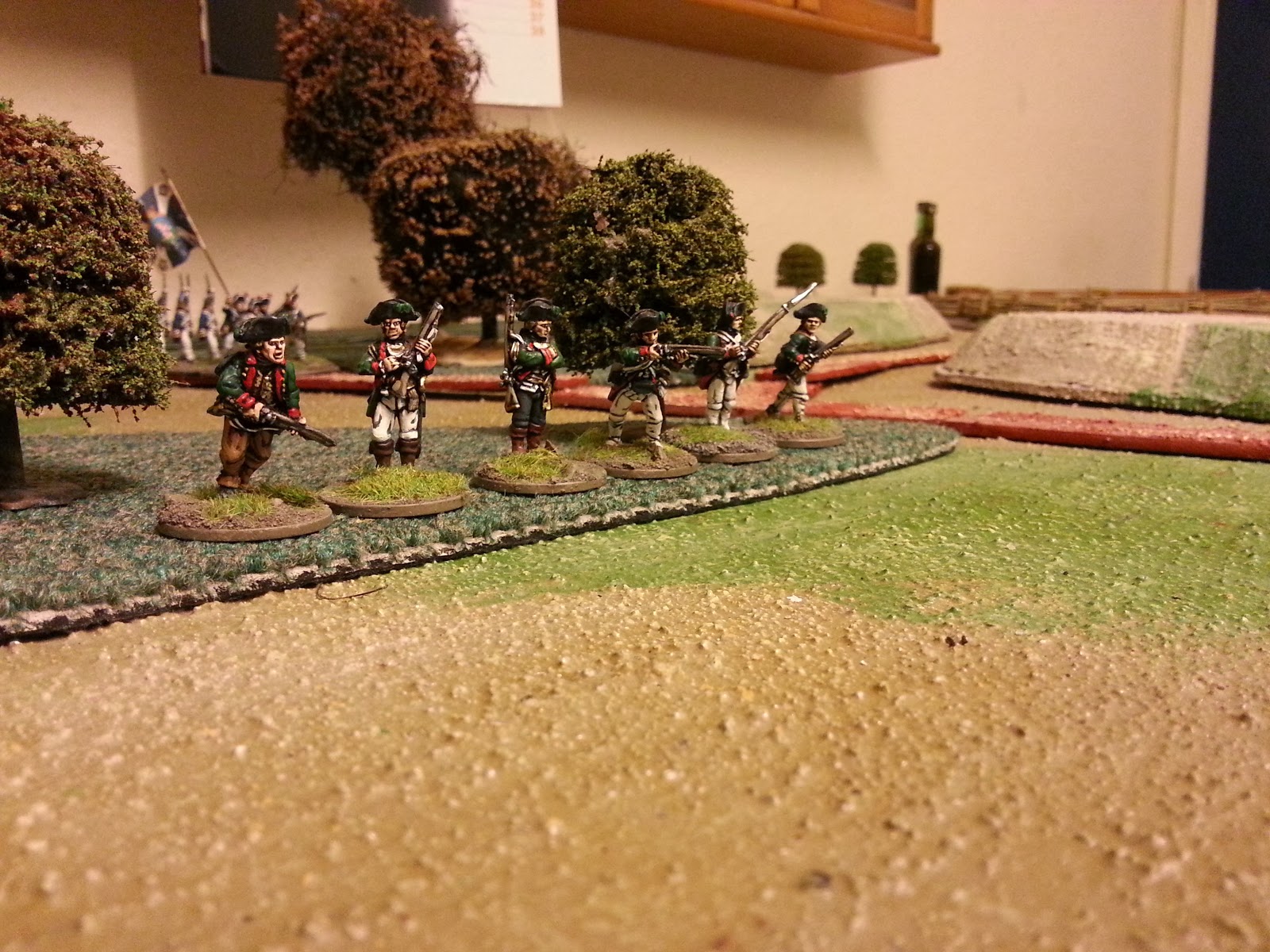 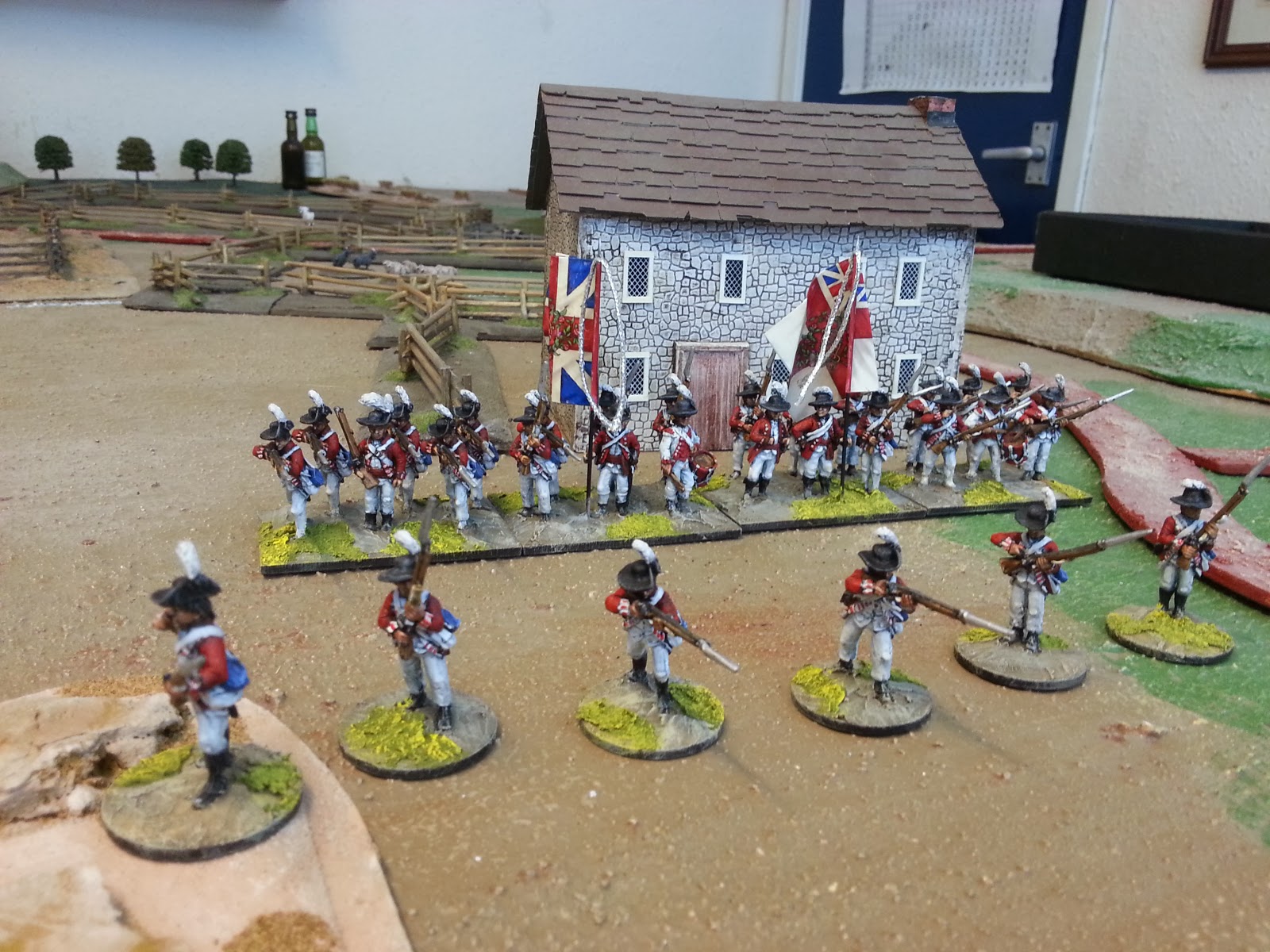 With the upcoming AWI game this weekend it was time to finish this unit which I've had hanging around for a while. The fantastic Perry Figs, these are from the metal range, with flags from GMB Designs.

I've got a huge pile of these to paint plus 5 units of plastics to paint, hopefully getting them on the table will help. 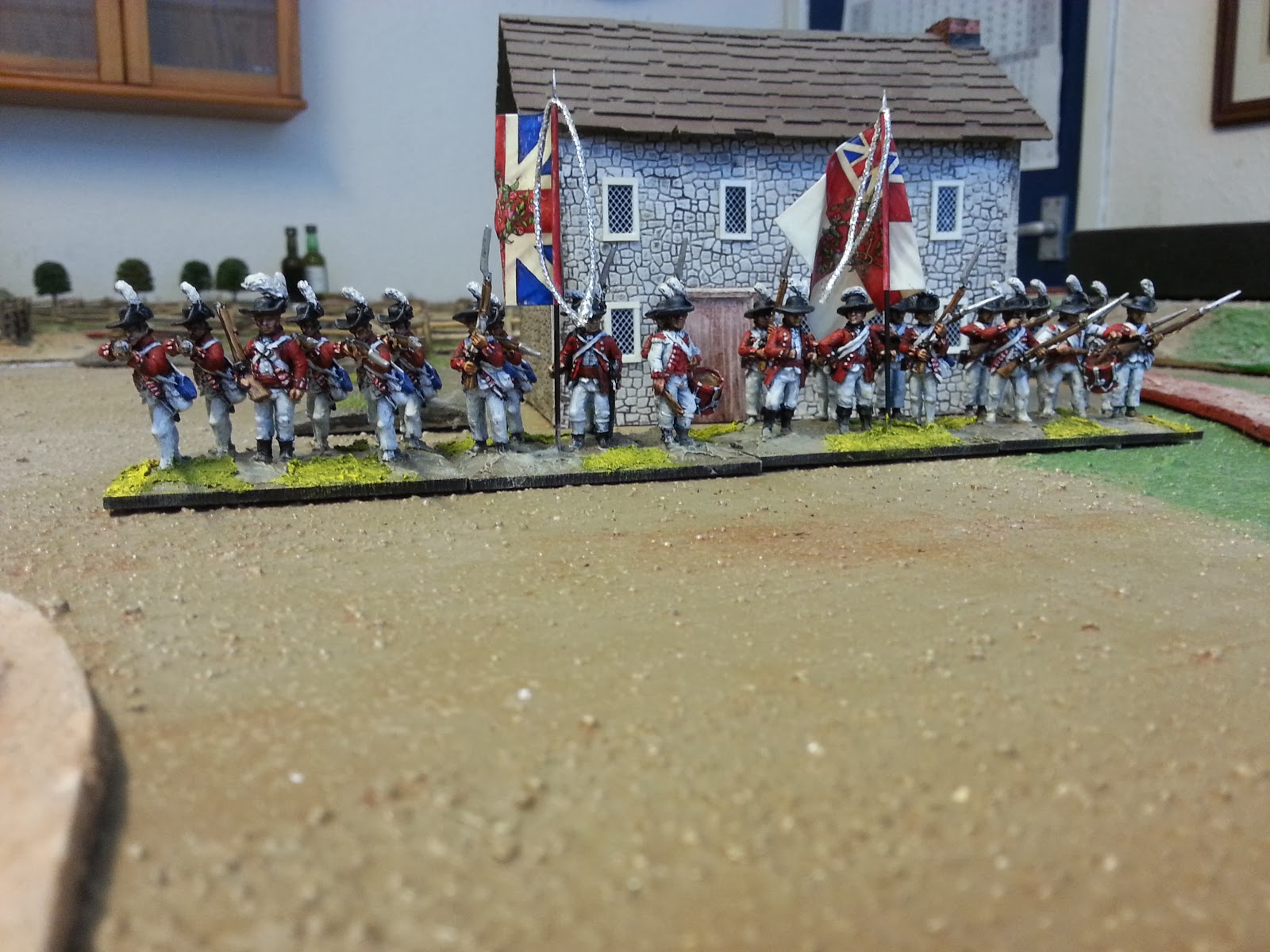 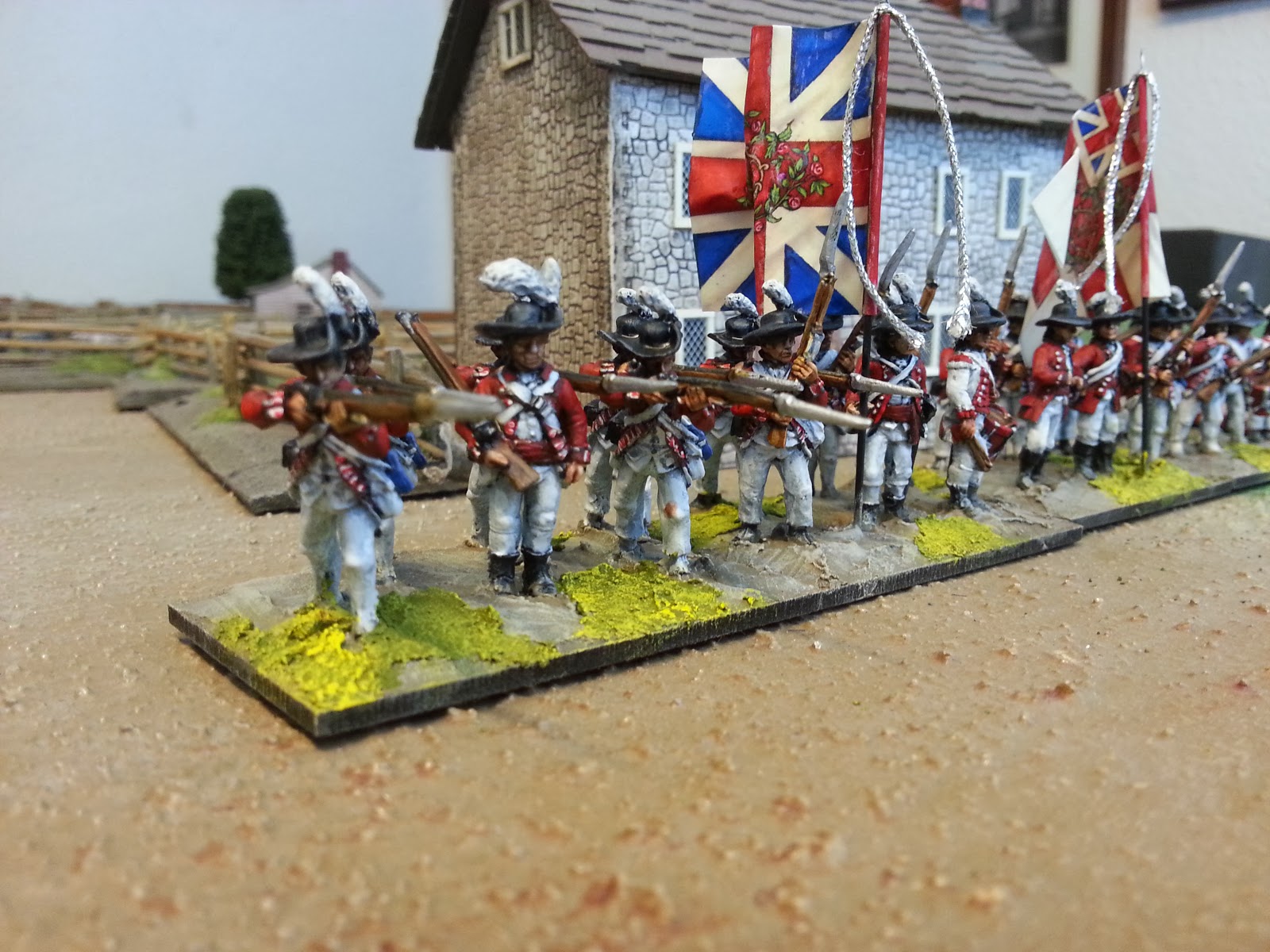 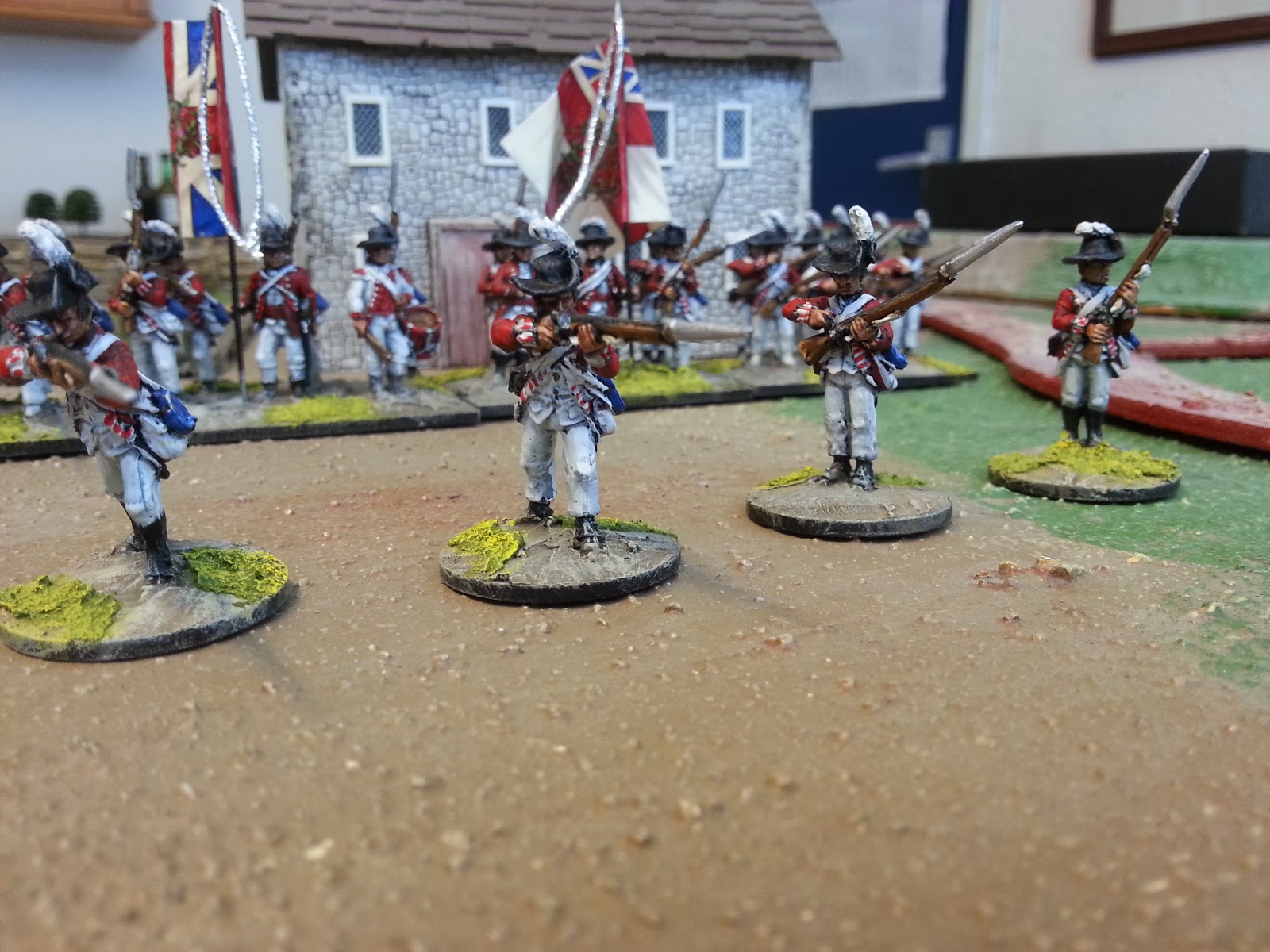 Well I was hoping for an exciting write up detailing the cut and thrust of a Republican attack, the lines flowing back and forth as both sides battled for supremacy, sadly that's not what happened, one word covers it and that is massacre. 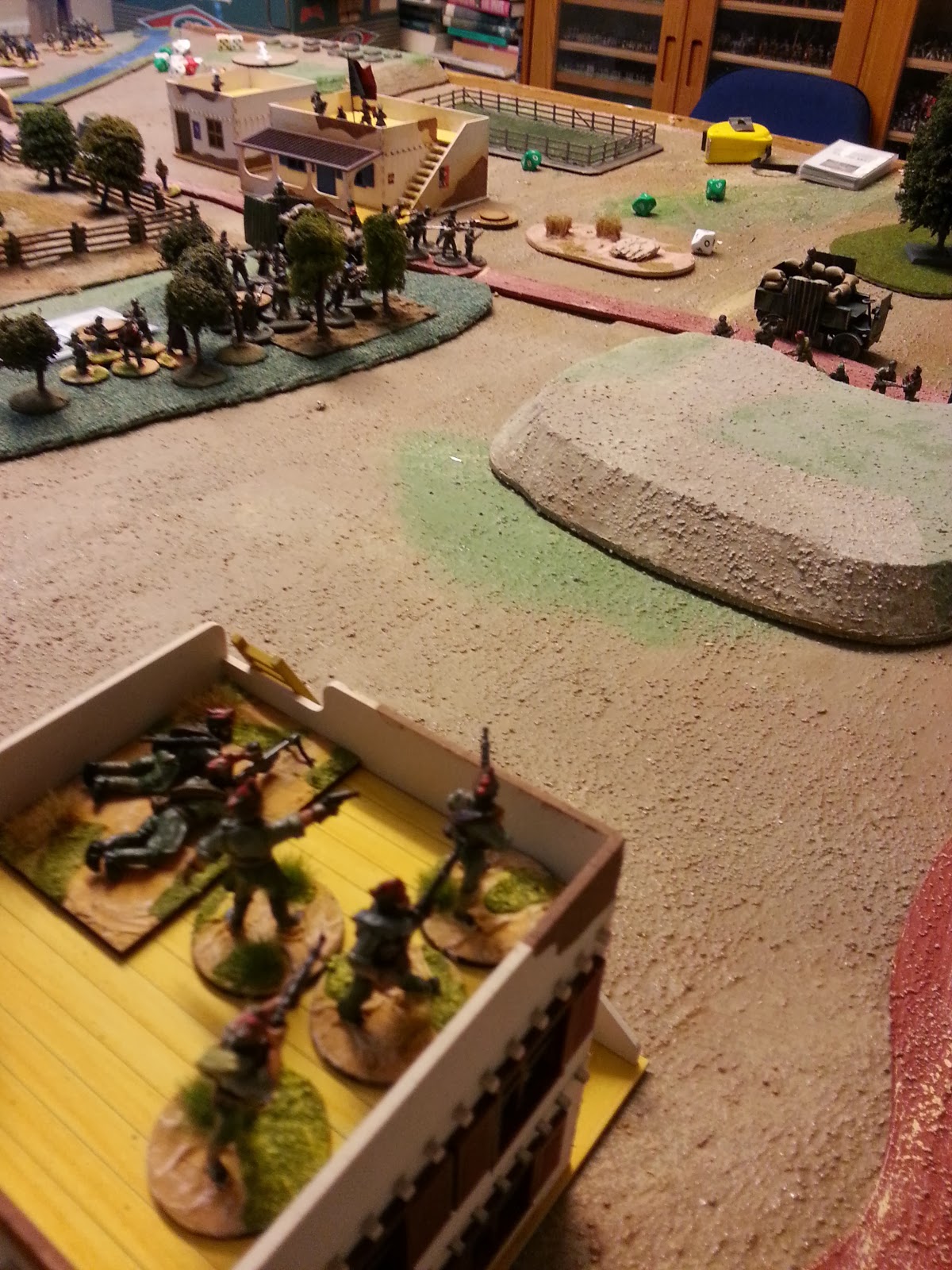 View of the Killing Fields, a Legion unit with deployed LMG wait the advance on a rooftop. 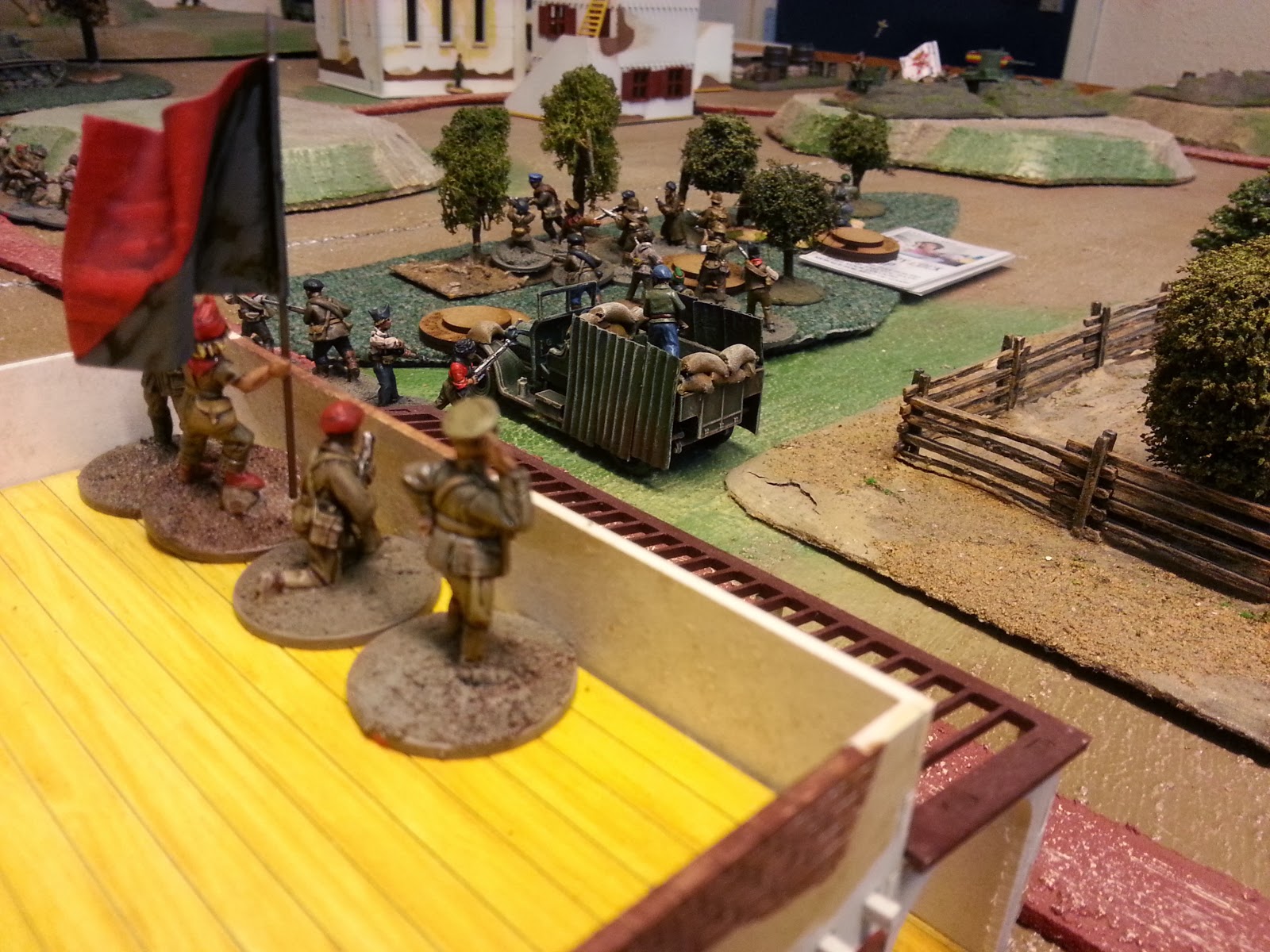 The Anarchist group currently elected to suggest things for the troops to do, but to suggest them in a none confrontational manner whilst realising that they are no better than the rest, look the other way towards the Legion and Carlists. This bad boy took the Republicans roughly from behind without even buying them a meal and a drink first.

Those of you familiar with the TooFatLardies rules will recognise this card as the Tea Break card, for the SCW we spent hours coming up with a radical new name for the card for our game and settled on Siesta ;-) Those of you unfamiliar with the rules may not know the significance of it. Basically each turn is run by an activation deck, each unit has a card in the deck, when the card is drawn that unit can fire, move or reserve its fire until the end of the turn. However if the Siesta card comes out the turn ends, any unit can move towards the nearest cover or fire (if it passes a morale check) if its card has not come out. 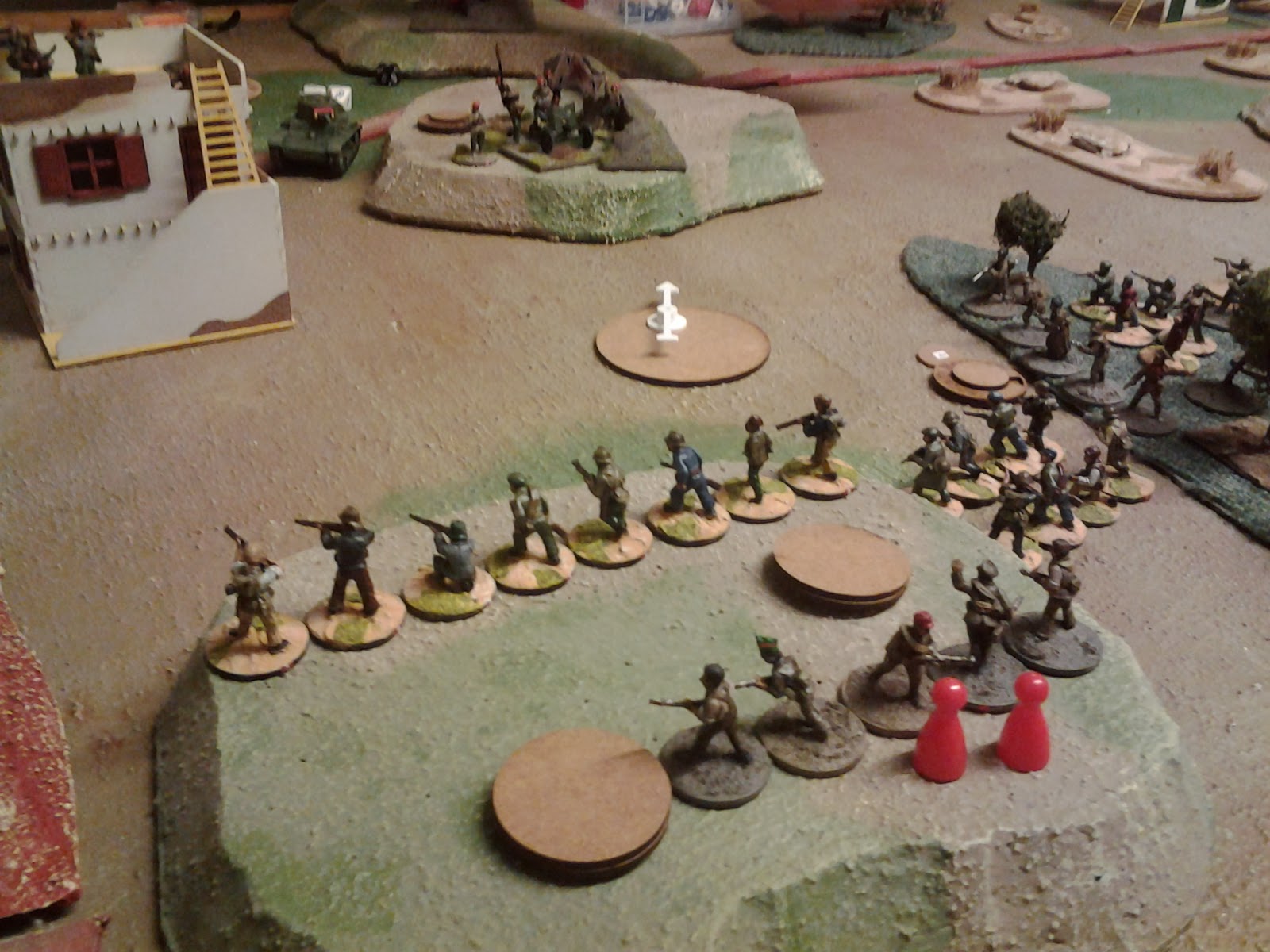 The start of the ill fated attack, the Anarchists in the foreground have already been pushed back.
The Republican plan of pushing units forward to draw fire so other units could use the cover of the woods to attack the less heavily defended redoubts just didn't work, every turn the Siesta card came out early, always after the Legion had fired and usually leaving one or two units out in the open to get shot at. The result was unit after unit getting wiped out, the Republicans unable to co-ordinate the attack due to bad luck with the cards just died in droves in the killing ground. 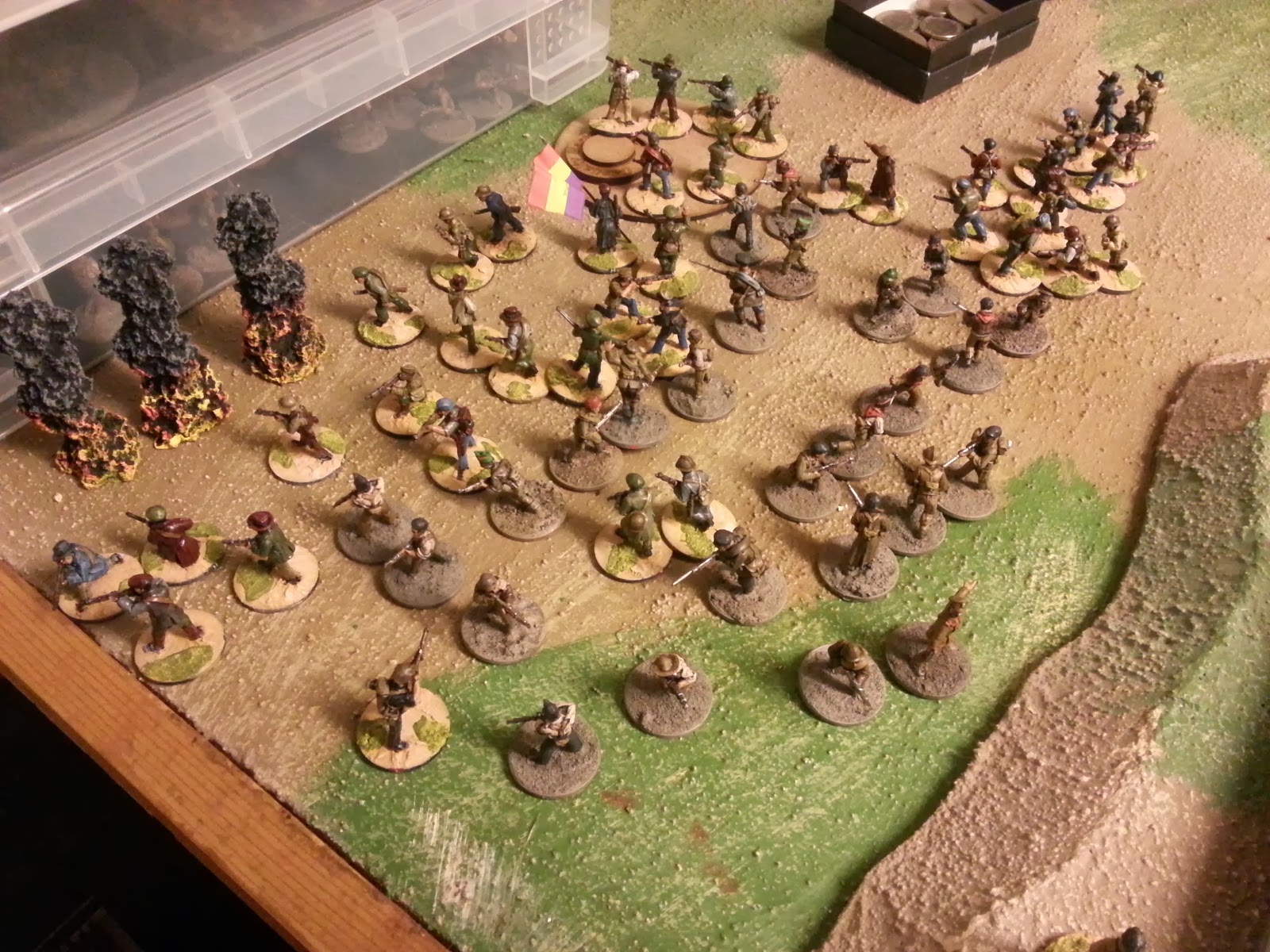 The Republican casualty pile from the attack. Not a pretty sight.

And that was that. No one was sitting round the camp fires celebrating singing 'Viva la Quince Brigada'

One of the things I like about the TooFatLardies card system is the unpredictability of it, however it makes it extremely difficult to co ordinate a large attack involving a large number of units, just like it would be in real life. In the 4 or 5 years we have been using these type of rules this has been the worst outcome as a result of the way the cards were drawn. I'm also still not sure about the card activation system for larger games, it leaves some people who don't have their cards drawn out of the game. It works well for a couple of hour club games but the larger weekend games I'm not sure yet. In the back of my mind I'm thinking about having cards activating larger bodies of figures, maybe having two Siesta Cards with the turn ending on the second card or using separate decks of cards for different zones on the battlefield. Any thoughts or solutions would be gratefully accepted.

So that was the end of that. Next up we travel back in time to the AWI, a new game starting Sunday using British Grenadier.