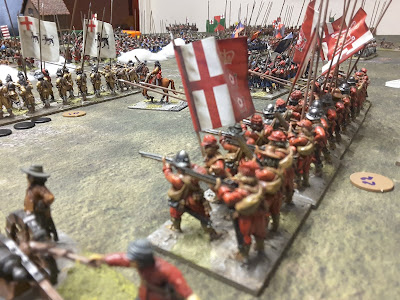 Another big favourite here at YG is the English Civil War and it's hard to believe that it is over 3 years since this lot last saw the light of day !

Edgehill is of course the first major action in the ECW and many who saw action that day would be getting their first taste of battle. I have decided to break this up into two reports, this the first on will cover the set up and orders of battle whilst the follow up will cover the refight itself.

Information on the Battle is avaliable from a multitude of sources so I don't intend to harp on about the build up but instead give you a wargamers view of setting up the clash.

Like most periods we are a little off piste when it comes to rules, for the ECW we use a modified version of Forlorn Hope. I "modernised" the basics over 10 years ago and they have worked well ever since.

The figure ratio for the game is approximately 33:1 and that has worked perfectly for this particular battle in terms of figures avaliable and the 12 x 6 table here. One good thing carried over from the original set is that each Infantry unit has a set number of figures and rather than individually counting Pike numbers and Shot numbers the unit is given a ratio of Pike to Musket.

Figures are 28mm from a collection of manufacturers including Perrys, Bicorne, Warlord and Renegade.

For this I have used the medium of video ! How modern of me. For some reason the sound didn't work on the footage so I have gone for some snazzy subtitles in stead.

I managed to locate a number of maps of the Battle all of which differed in some way. The troop set up seems to be pretty constant but some maps show enclosures, a brook, small woods etc it's difficult to tell what was present on the day and what is a modern interpretation.

However I don't recall reading of the terrain having any massive affect on the Battle so I chose to leave the table relatively sparse and just the the armies get on with it.

There is a very good OOB at the link below,

So the list below is my interpretation of that for the game with the following notes,

1. Forlorn Hope rules have army lists for each year of the war in each theatre, these generate troop morale classes, pike:shot ratios etc by rolling dice, this is how the factors have been determined. So for this stage of the war there are no Veteran Infantry.

2. We rolled particularly well for Ruperts Cavalry but if you don't I would suggest for realisms sake that if you have a "name" unit in a brigade, roll up the entire brigade and allocate the best rolled factor to the best unit.

3. I was unable to find any break down of the total numbers (on the orbat above) other than Rupert having around 1700 Cavalry vs 1300 to his fore. Therefore I have had to estimate the size of the infantry units dividing the numbers present by 33 and then filling up the numbers required in each area with the units in our collection. Our rules need Infantry units at least 16 figures and Cavalry of at least 6, so the eagle eyed will notice the odd unit missing in name from our game, however the men of that unit have been spread across that particular command.

4. Forlorn Hope has a sub morale class of Elite, this can be tagged to any units basic morale and reflects an over confidence not necessarily linked to ability.