Its been a while for various reasons, but we finally got our Gallipoli game done to a conclusion last week. This is a continuation of an earlier post which you can read HERE

We left our intrepid bunch of Empire Troops starting to leave the beach and head up towards the first line of hills whilst the Turkish defenders tried desperately to throw them back in the sea. For ease of reference I have included the scenario map for a second time. Quite a long post today so sorry for that. 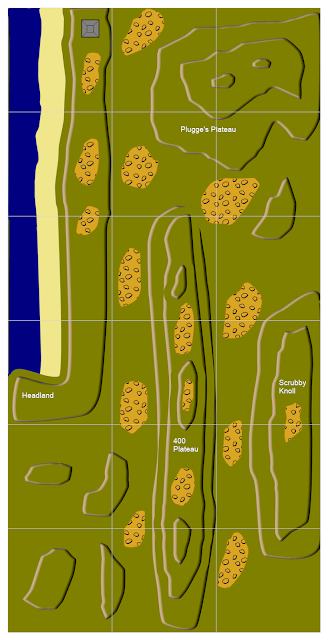 The Empire Troops started this phase of the battle with the following telegram in their hands,

Good show chaps, from my binoculars on board my heavily armoured Battleship a good distance off the coast; I can see that you have some fine fellows off the beach. Re enforcements are on schedule and you must ensure that the beach is safe for them to land on.

The hills behind the beach are steeper than we thought, it will take you one full turn to climb each level.

You will receive 2 AOP officers in the next wave, if they spot and enemy unit they can request a Battleship Salvo to teach Johnny Turk a damn good lesson. The ships are very busy with other requests so you will only be successful with your request on a roll of 4,5,6 on a d6. It will arrive on the NEXT turn of your Artillery Card, it will be subject to deviation but strike with 5d6.

My man has just brought me a fine Martini so I must crack on, toodle pip. 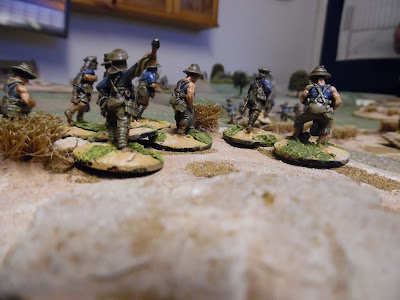 "Your timely observations have warned us of the landings in your sector, unfortunately a number of other landings have taken place and re enforcements are at a premium.

Units are on the way to your position but may arrive as late as 08.00.

We have scraped together two companies of troops (8 figs each)from those in the rear of your battalion and sent them to the front. You have a further battery (4d6) off table but in range as well as three specialist snipers who are now in your lines.

Stop the Empire troops from getting inland, hold each ridge line as long as you can. Die where you stand, others will come and take our places. 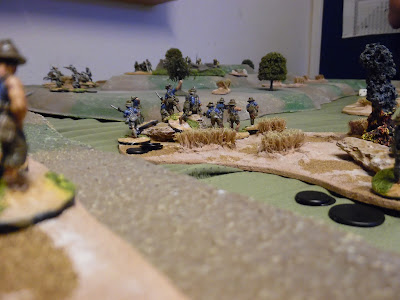 05.40 The second wave of troops begins to disembark on the beach, each boat carrying the remainder of the battalions that arrived at 04.30. Turkish Snipers and Reserve Companies deploy. One Company on 400 and one on Plugges.

05.50 The Turkish troops on the headland start to pull back due to heavy suppression

06.00-06.20 Anzac troops are advancing exposed to fire across the valley between the beach and the first line of hills, losing casualties to Artillery, Mg, Rifles and Snipers alike. 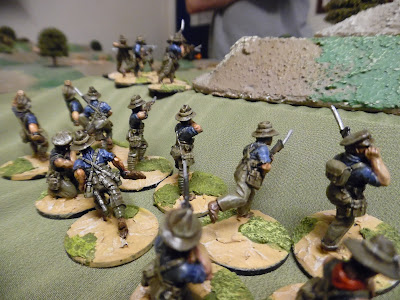 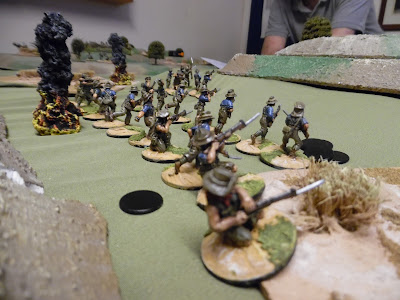 06.30 The next wave of boats arrive containing a complete battalion of the Royal Naval Detachment, including HQ and MG base. 2 coys of Anzac troops gain a foot hold on the 400.

06.40-06.50 A cautious advance up the 400 towards a Turkish blind which turns out to be a single Turkish Sniper, charged by 6 figures the Sniper takes one down before loosing out to superior numbers. 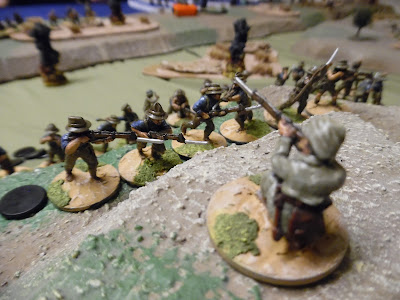 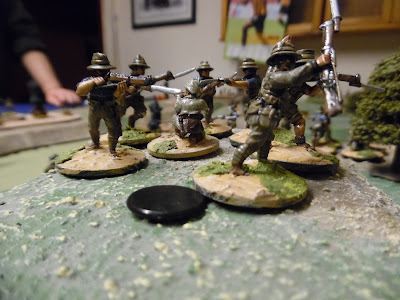 It was at that point that the sessions gaming ending and we determined a third Sunday all dayer was required, so while the rest of the world was in Waterloo 200 mood, we were still on Gallipoli 100.

Our final session started at 07.00 with further casualties to the exposed ANZAC troops on the 400 and it wasn't long before one of the companies was wiped out..

07.30 The next wave of Empire troops arrive on the table, in the boats this time we have half a battalion of regular British troops, the same of Gurkhas and the newly painted Sikhs. The Cheshires brought their Mg with them whilst the other two units turned up with their HQs, all the units landed next to each other on the beach.

At this point the Turks received another two battalions of troops both with a HQ section of 2 men, 4 x 6 fig companies and an Mg each, all arriving on blinds. One showed up on Scruffy Knoll, the other at the far side of Plugges, just as the Anzac troops on that side of the table reached the plateau.

We also went to a full deck of cards at this point, adding in Turkish Delight, Stiff Upper Lip, Hesitant Turks, They don't like it up em and the Tea Break.

07.50 was not a good move for the Empire, the toe hold on 400 was lost, the two companies on the top of the hill couldnt hold out any longer and retreated down the hill, they had been stuck isolated on 400 for just over an hour but without support they just couldnt hold on.

On the other side of the battlefield on Plugges the Anzac troops came to grips with the newly arrived Turkish troops, a prompt Aussie charge should see those damn Turks off. Round 1 8d6 vs 2d6, Draw !, Round 2 7d6 to 2d6 and the Turks won 1-0, amazing.


The next turn things turned the other way.

The next 3 turns taking us to 08.30 all had quick tea break cards which although it slowed the Empire advance it also prevented the Turkish troops on 400 from reducing their suppression levels, that and the second half of the 3 Empire Battalions landed. 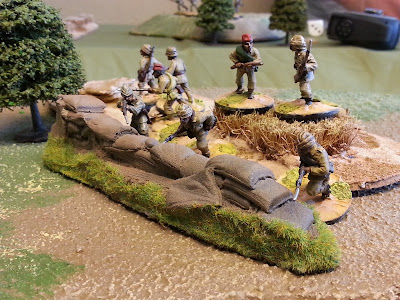 We battled on until 09.00 when the Turks pulled back from 400m onto Scruffy Knoll, general consensus was that the battle lines had been draw, similar to on the day of the landing, with further Turkish troops due it would take a long time for the Empire troops to re organise, and get the troops up from the beach into a position to attack by which time the Turks would be in a formidable position.

I think the game runs better with an umpire. The first real Turkish re enforcement arrived on the day from 08.00 and without some smoke and mirrors a player with a good knowledge of the battle would just keep going forward and be off the back of the table. For those who want a crack at the scenario, I planned for a final wave of troops to land at 09.30, a whole Battalion with MG, then shortly after a Regt of Turkish Troops where due to arrive on Scruffy Knoll. You could also consider adding a delay to the boats after 07.30, on the day boats where used to ferry away casualties and the hour turn round time started to turn into an hour and 10 and so on. A good umpire should be able to tweak the schedules etc to keep the game alive and interesting for both sides.

The Empire Troops lost just short of 100 figures (about 3000 casualties) and the Turks 30. Another enjoyable WW1 game, it took a while but as I've said before theres no rush when you are lucky enough to have a permanent set up.

The collection goes away until Xmas while the next game will see the start of our pre planned WW2 Mediterranean Naval Campaign.
Posted by Yarkshire Gamer at 09:12:00 No comments: 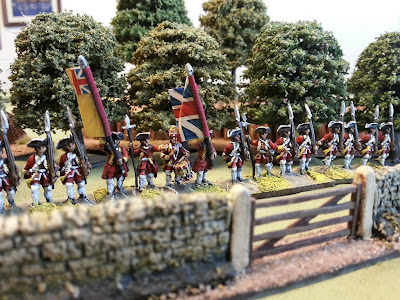 Back in February I reviewed some 15mm British Infantry figures which I had recently purchased over the tinterwebnet, made by an American Company, Blue Moon. See the review HERE or you can find the figures to buy (if you like them that much) from Old Glory UK. The flags are from the ever useful GMB Flags. 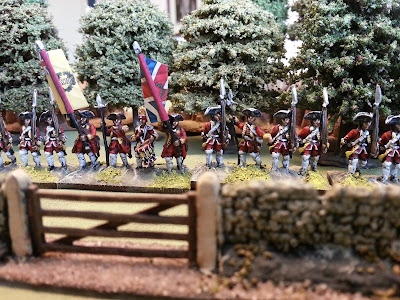 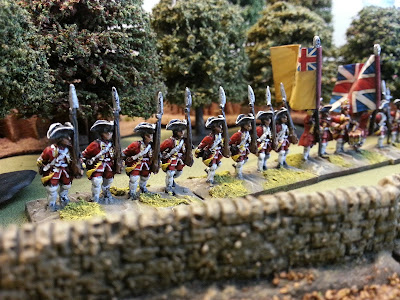 So here we have the first painted unit, representing Napiers 12th Regt of Foot at the Battle of Minden, 20 figs based in 4s on a 40 x 20 mm base size. I haven't done these as a Box to Table tutorial as they are very similar (in fact the same !) as the Hanoverian Infantry I did here. 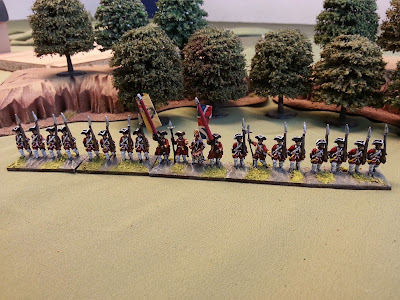 Ok, so what do I think now I have painted them, I'm relatively happy, without falling in love with them, my initial concerns made in the figure review regarding the faces proved correct on some of the figures. My painting style seems to suit detailed sculpts and I tend to work better when the figure guides me rather than having to paint in details, that and my eyes are starting to struggle with 15mm figures. 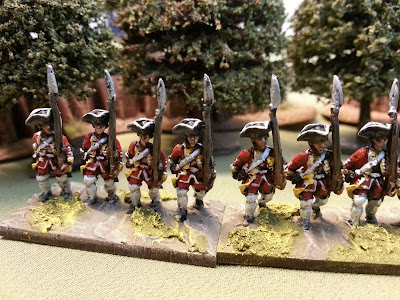 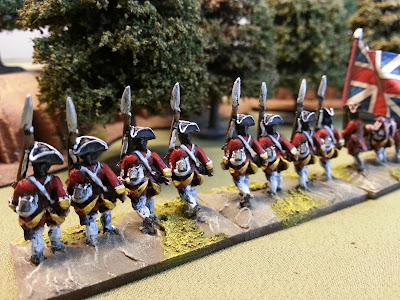 I would have liked a bit more definition on the front of the figure and found the cross belt particularly difficult to locate. I'm not saying these are bad figures, they are far from that, I will certainly be using them to complete the Brits I need for Minden, they could, for my painting style, use the odd tweak here and there. They are certainly better than anything I could do, my attempts at figure sculpts always end up looking like a wax work model that's been in a fire ! 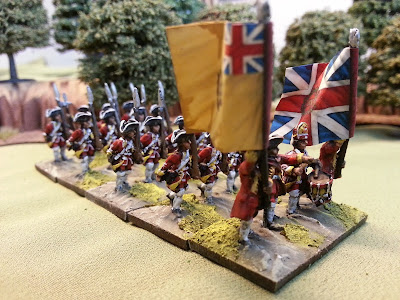 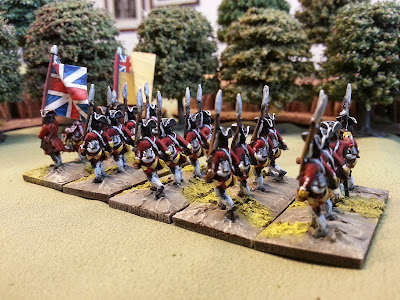 One of the discussion points that arose on TMP from the initial review was that of comparison with other figure manufactures, so I have added some pictures of other makers stuff for you to compare. 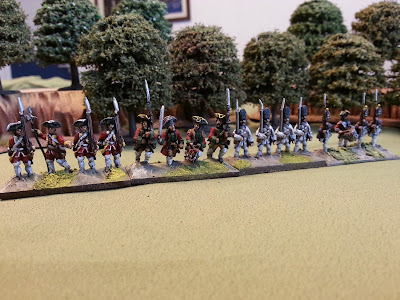 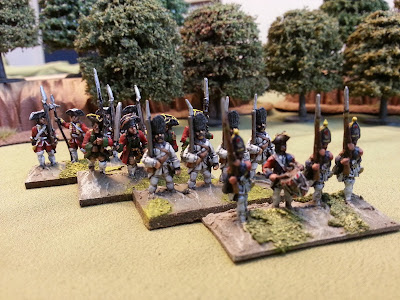 Right to left, as viewed, Friekorps 15, Essex, Old Glory and then Blue Moon. Thanks for listening.
Posted by Yarkshire Gamer at 10:13:00 No comments:

Empire of the Dead - Vampire Faction


Regular readers with know that weird stuff is not my normal bag, however after a month of Green Ochre and WW1 Turks I needed a change of scenery. I started some of these last year and my previous efforts can be found spread throughout this blog.


These are of course from the Empire of the Dead range of figures from Westwind and very nice they are too. Nice clear detail and a joy to paint.

Painting single figures still feels a bit weird but it was a nice change from my usual conveyor belt method.

So there we have a drift into weirdness, back on track with some 15mm SYW on the paint table next.
Posted by Yarkshire Gamer at 05:23:00 No comments:

Email ThisBlogThis!Share to TwitterShare to FacebookShare to Pinterest
Labels: Empire of the Dead, New Unit 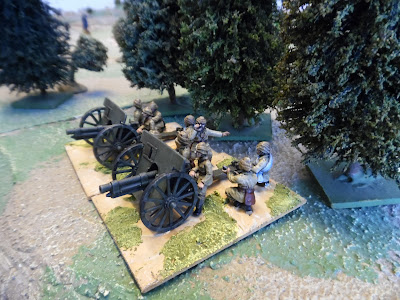 Last month I put up a Box to Table tutorial (HERE) covering my latest recruits to my 28mm WW1 Turkish Force. I had placed rather a large order with the Woodbine Design boys in the early hours of the morning and included in that was some artillery and some Mgs. 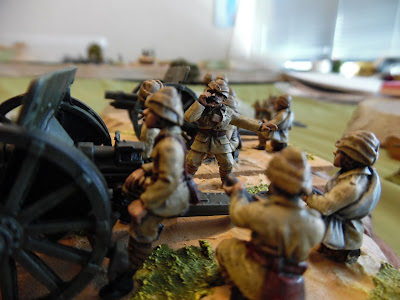 For the last few years in our WW1 in the East games our Turkish Artillery has always been "off table" for the sole reason that I didn't have any. I put that too rights this order with a order for two Turkish 75mm Guns and Crews, there is a slight discount for buying two guns and at half 3 in the morning when I ordered them it seemed the right thing to do. 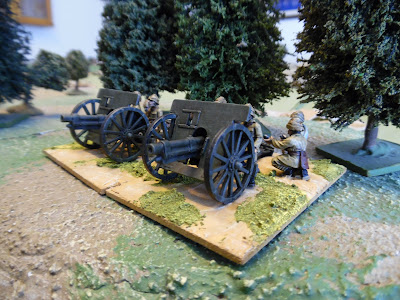 So here we have them, painted in the same style as the tutorial and based ready for action, our WW1 Gallipoli game is ongoing and these will see action in the next session. Write up here. 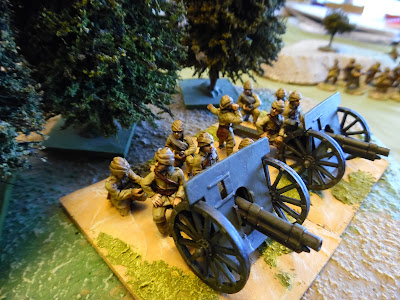 Also in the order were a couple of MG bases to add to the one I already had, this will give me one base per battalion. 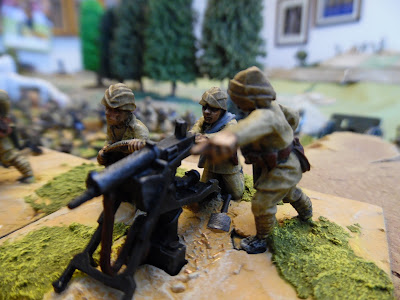 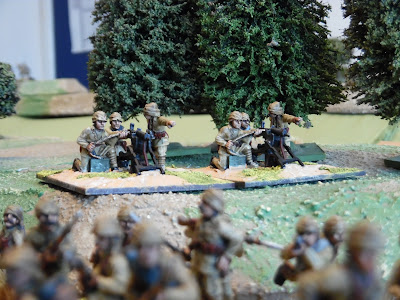 I also picked up a pack of the higher level Turkish Command to act as a Regimental HQ. 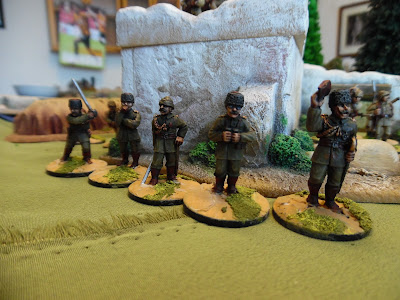 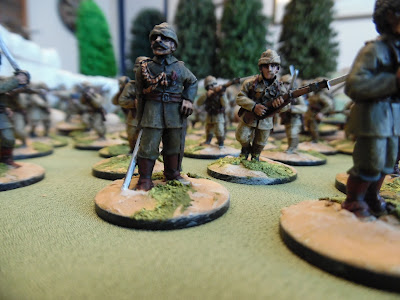 And just too finish off a couple of pics of the order all completed and ready for the table, more than happy that I got all of these done in under a month. 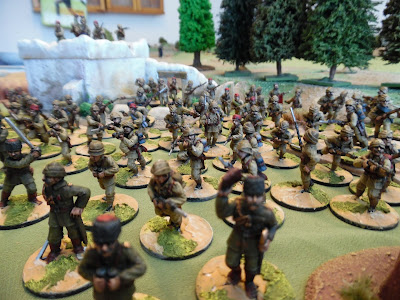 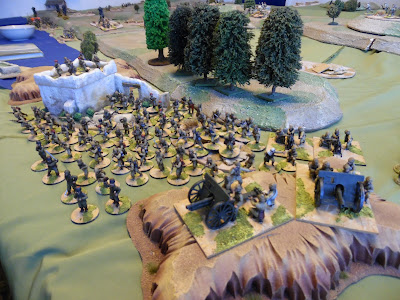