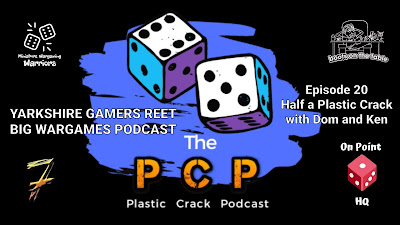 Welcome back and a Happy New Year to you all.

The first episode of 2022 features the two original members of the Plastic Crack Podcast, a live Monday Night stream of general gaming chat which is growing and growing in popularity.

Link to the episode on Podbean Below 👇👇

Please leave a like or review wherever you listen, it helps to make the Podcast more visible and more importantly thanks for listening.

Starting in March 2020 with my guests the show has featured a number of Hobby Glitterati as guests but is probably best known in its current format as 4 gamers chewing the fat over the most important and quite often least important topics in the hobby.

The show features all our usual features and as always we drift off onto important topics like "should you have gravy on chips". We have another couple of entrants into Wargames Room 101 as well as another fun trip round the Yarkshire Gamer Quiz. 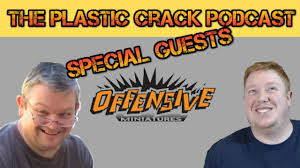 The Podcast circulates round the four channels of the guys involved,

Dom runs Boots on the table and his channel is below,

The new release schedule of 2nd and 5th weeks of the month means that there will be just one Episode per month for Feb and March. So I will see you next month when I hope to be speaking with Gerry Elliot of Wargames Holiday Centre fame. 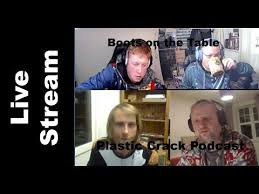 28mm Papal Zouaves for the Risorgimento 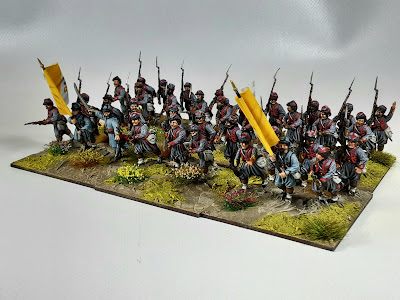 I've been neglecting the blog recently, with so many other things competing for time with Podcasts, Videos and Paint Challenge, there just haven't been enough hours in the day.

I have been talking about my Risorgimento Project or more specifically my attempt to recreate the Battle of Mentana in 28mm for a while in other places but I haven't really covered it here yet. 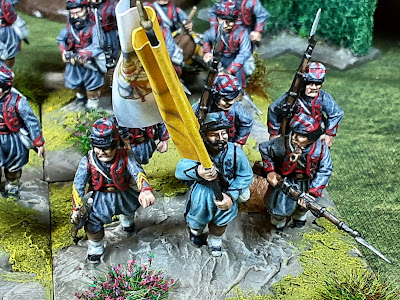 There are quite a few Garibaldi units already finished and I'll get round to doing a post on those soon. First up from this project though is my Papal Zouaves, something I did a test base for back in the summer, which I posted up in various places.

I've been looking forward to doing this unit for some time and I'm glad to say I'm really happy with the result. So here is my representation of one of the two Battalions of Papal Zouaves which fought at the Battle of Mentana. These formations were 750 men strong so I've made them 36 figure units as opposed to the earlier Garibaldi Infantry which are 24 figures representing  350 to 400 men. 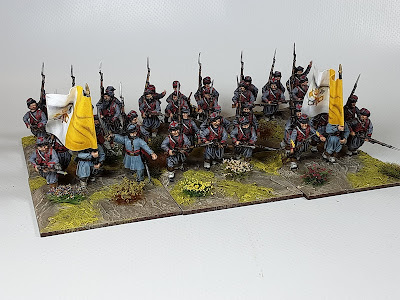 The unit was truly international and was made up of volunteers from all over the world. Large contingents came from Holland, France and Belgium but most European countries had some representation in the unit along with smaller groups from the Americas, Africa, India and China. Initially a single Battalion in 1861, it increased in strength to 4 Battalions in 1867-8. 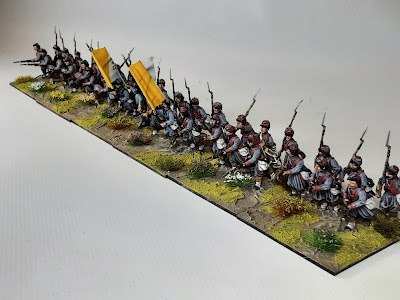 The figures are 28mm (of course, I have a reputation to keep 😁). The bodies are from the plastic Perrys ACW Zouave box set, which I had lying around from a previous projects whilst the heads were bought separately from Steve Barber Models. There are some minor variations in the sources I have about the uniform so I picked a version and went for it. The flags are a research project in themselves and for the moment I've just used a generic Papal States flag, 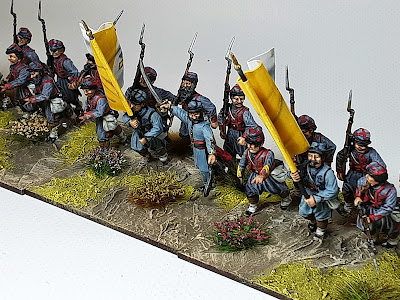 As is pretty much the norm with all my stuff now I've extended the depth if the bases, I love the sculpting of the weapons on the Perry Plastics and its to perfect scale, it is however a touch fragile and as these figures will be gamed with and most likely go to a few shows as a display game I want to protect them.
Simply by extending the depth so the whole of the weapon stays within the boundary of the base gives a much greater level of protection, its something I've been doing for a pretty long time now, harping back to my first plastic AWI figures. 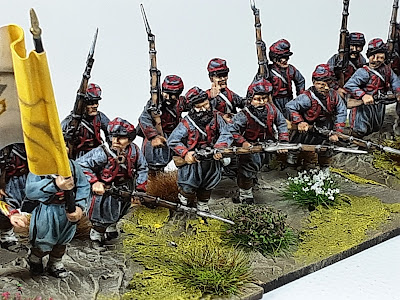 I don't have a plan for rules yet, I have had a look around but nothing has grabbed my fancy yet. There are some Italian Language rules specifically for the period (and I love that in a rule set) however I've not been able to get hold of a copy.

So I've done my usual thing of basing before deciding on rules and gone for 60 x 60 bases six figures to a base. I've also used my staggered ranks technique to make the unit look "fuller". 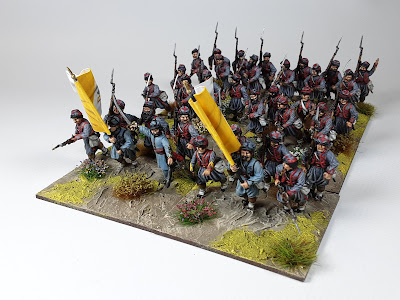 Most of the photos have been done with the white background I've been practicing with, it definitely gives a very different look to my usual "terrain" background and is particularly hard to light but it's growing on me. 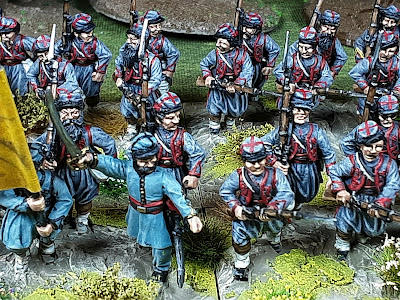 Next up I will be back with another episode of the Podcast (number 20 !)