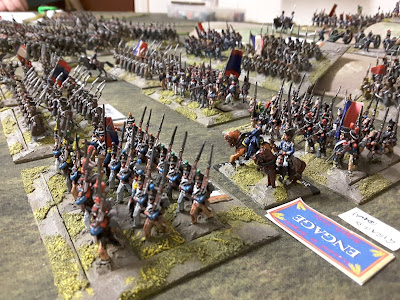 The latest Battle to grace the table here at Yarkshire Gamer is a bit of a Napoleonic Peninsula classic, the Battle of Albuera. Not one of the "main" battles, more of a sideshow and one without the "main man" the future Duke of Wellington present, however it is one of the more balanced engagements of the conflict. There are only so many games the French can handle stumbling up a hill only to get blasted to pieces by a well hidden British Line !

It's also the first outing for what I hope will become our new staple Napoleonic rules, I have been searching for years for a set I am happy with, in fact ever since the mid 90s when my Atari ST gave up the ghost halfway through a game of the computer moderated "Hard Pounding" rules. Tried loads and everything failed.

Having played other rules in the General de Brigade series (British Grenadier and Die Kriegskunst) I have gave them a go and to be fair I quite enjoyed them, they just missed that something. Thankfully I knew that, that something was National Characteristics.

Now I know they are old skool etc etc but they are what I like in a game, so effectively I have chucked GdB up in the air and mixed in some Bruce Quarrie style National Stats as the pages came down. This is the first playtest of that Masala ! They seem to be working so a blog post in the very near future will supply the recipe. Any way I seem to have been side tracked, back to the game.

The battle occurred on the 16th May 1811 and is often quoted as being one of the bloodiest battles of the Peninsula War. The Action included troops from the French, British, Portuguese and Spanish Armies and although heavily outnumbered the French made up for the lack of men in quality.

Marshal Soult had left a strong Garrison at Badajoz however with Massena withdrawing from Portugal, Wellington sent a strong force to recapture the fort. They drove the French from the area and began the siege of that town.

Soult rapidly put together a new French force and marched towards Badajoz to relieve the siege, however his Intel was poor as he was met en route by the Spanish Army of Blake and the Anglo Portuguese Corps of Beresford near to the village of Albuera.

We are gaming on our usual 12 x 6 table with 15mm figures from a number of makers using my GdeB / Quarrie mash up rules. Orders of Battle are based around 20 men to 1 figure, some units have been amalgamated. For those looking closely at the Photos some units are substitutes for example I have used some Italian Infantry to represent French.


Above is a video of our table set up showing terrain layout etc. We have set up with the French just about to start their attack. 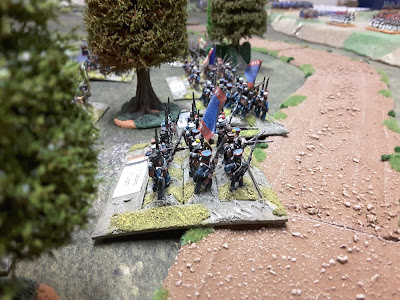 I have included basic start points, watch the video if you are unsure. 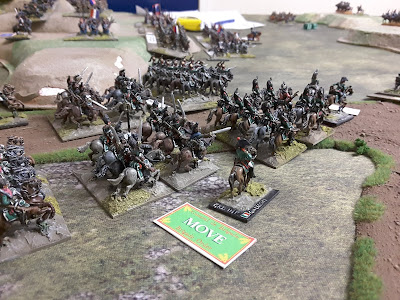 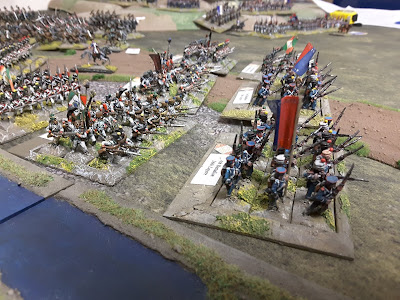 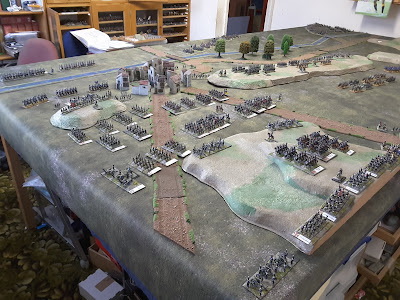 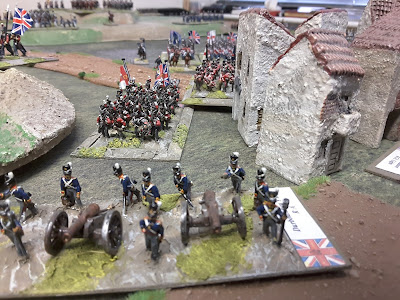 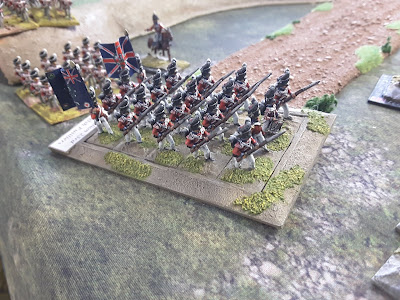 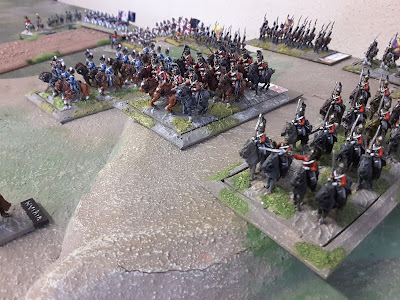 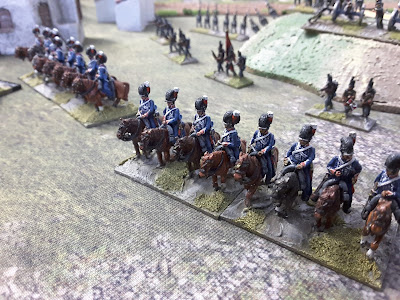 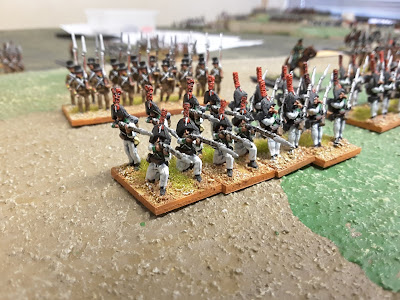 To simulate the initial confusion about the French attack all Allied Brigades start on HOLD orders, they can react to the presence of Godinots advance. However when the Spanish Cavalry spot the French flank move (on turn 1) they will detach an outsider to inform Beresford. It will take 6 moves to reach him, until that point the British and Portuguese troops must remain on HOLD orders unless directly threatened.

After turn 6 all Brigades are free to try and change orders.

So that's the set up, game report to follow soon. 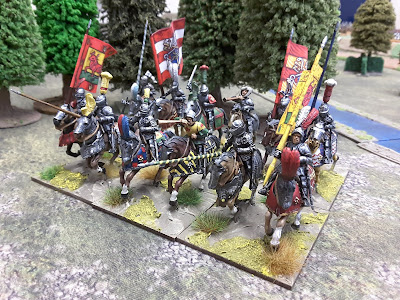 The long hard slog that was the first batch of Heavy Cavalry for the Italian Wars Project is over, the second mini batch of 6 Gendarme are done (at the front) to join the other 6 which I finished a month or so ago. 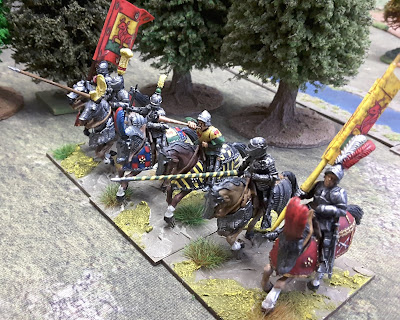 Each figure having a different look, colours, horse furniture etc really slows down my decade perfected method of batch painting but now they are done I am quite pleased with the results. 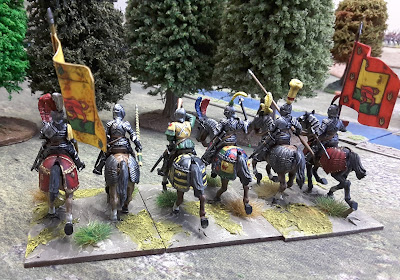 The figures are from the plastic Perry Mounted Men at Arms set, as discussed in my previous post they are designed for the mid 1400s to the beginning of the Italian Wars so some will say the armour to early etc but they work for me. 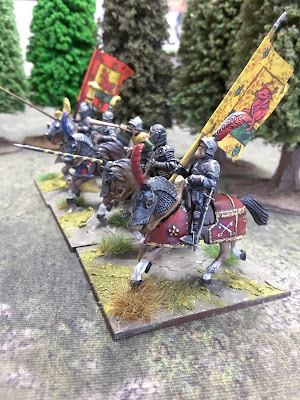 The banners are from Pete's Flags (find them on eBay) and are representative of the Borgia family, famous or possibly infamous in the early part of this period. I have based a lot of the colour choices on the figures around the flags and included some Papal references on the figures along with the red bull of the family. 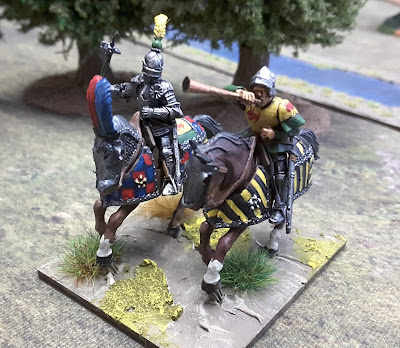 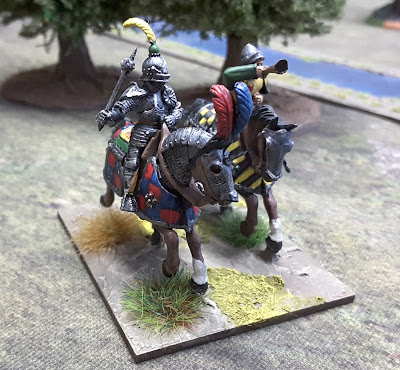 Base 1, the command base includes the commander with his horse decked in the family coat of arms of the Borgias and a musician wearing a smock based on the green / yellow of the central part of the flag and the bull motif. 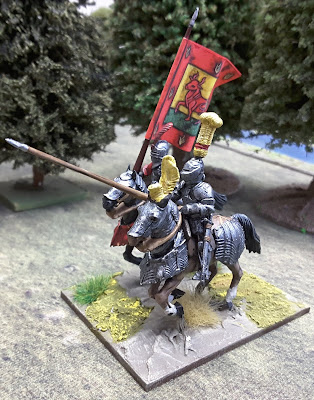 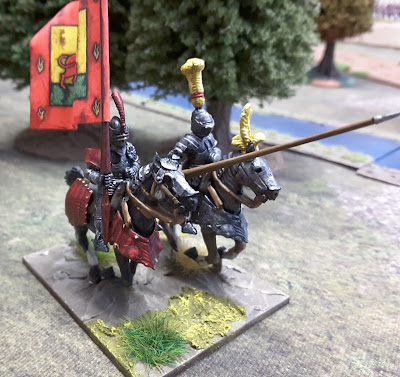 Base 2 has a red background flag two Gendarme with Lance and some basic horse furniture. 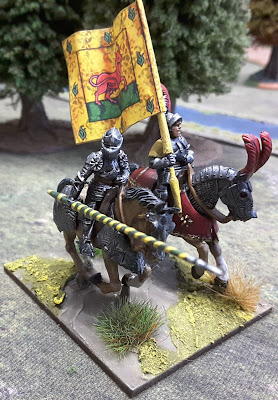 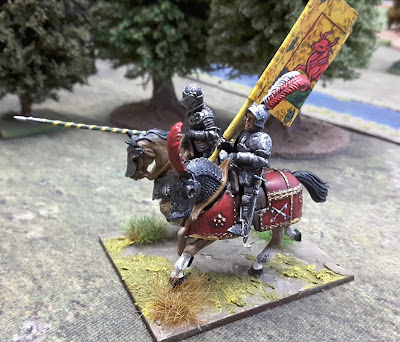 The final base is probably my favourite of the three, this one has a yellow background flag, one figure has red horse furniture with the Papal keys painted on, whilst the other figure has plain steel but a green / yellow spiral lance. 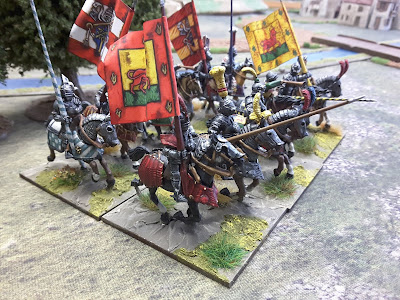 Next up are some lighter Cavalry before I start work on my second pike block and accompanying Shotte unit which should give me enough for a few practice games.
Posted by Yarkshire Gamer at 04:40:00 No comments: 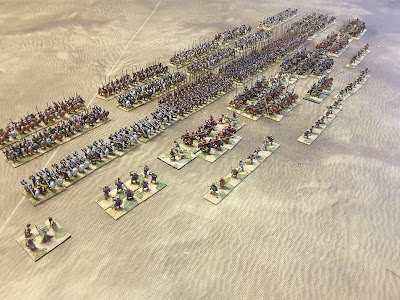 This week I'm back with the second part of the new Troops on Parade feature. A review of some of my figure collections, last time it was my 28mm British WW2 Desert boys, this week it's my 15mm Macedonian figures.

Started around 12 years ago as a bit of an arms race project with a fellow gamer who was going for a Greek Army, it hasn't really seen that much time on the table and over the years it turned into one of the armies I added to every now and again but rarely gamed with. 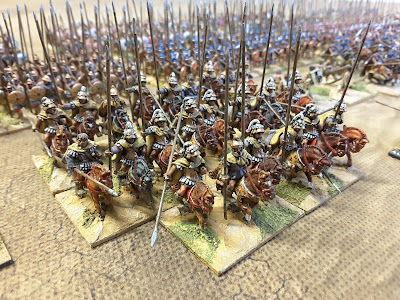 I have never found a set of Ancient Rules I liked. Most sets are designed for competitions and points based games, which coincidentally are the two things that, for me, send rule books arcing towards the waste paper bin. Those rule systems tend to break once they go outside their designed parameters, I want to recreate the sweeping majesty of Alexanders giant Phalanx (Ohhh......Matron) and the wedge tactics of the Companions. You can't do that with a 12 base DBA army !

That lack of rule set means my 28mm Punic Armies (no doubt a future feature on Troops on Parade) sit in a box unused. I thought Hail Caesar might have been the answer but sadly not, didn't work for me.

The figures themselves are from Xyston, I bought them when they first came out. I was on holiday in Scotland near Edinburgh where they were made at the time. I rang the maker up at the time to try and locate a local supplier and he invited me down to the company warehouse (which was pretty big) and I had a great couple of hours looking round and chewing the fat. Walked away with a rather large box of miniatures, the results of which are before you.

The company also made a Sci Fi game called Void, the name escapes me.

As a young lad I was fascinated by the story of Alexander the Great, conquering the known world at such a young age, his ability to hold together a large Empire and integrate into different cultures. If you haven't seen it the TV series Michael Wood, In the Footsteps of Alexander the Great will provide all the inspiration you need.


I was quite surprised when I put this stuff out exactly how much there was, neck end of 700 figures, I still have another 64 figure Phalanx and 24 more Companions in the "to do box" so when I do find "that set of rules" there will be something else to paint. 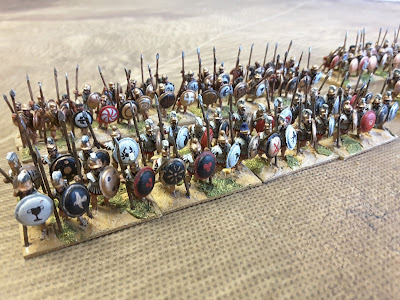 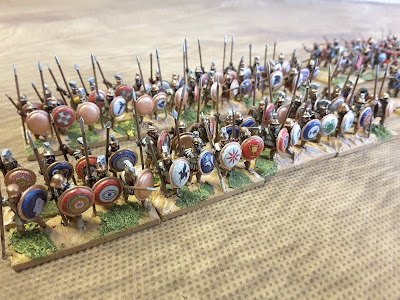 I noticed whilst photographing the figures that quite a few of them had hand painted shield designs whilst the remainder had decals. This must have been a cross over army between the two. I will certainly buy the guy who invented shield transfers a pint if I ever see them, what a cracking idea.

And finally some Thracian allies, I remember my Punic Romans being chewed up by these boys years ago so a unit of two handed weapons was a must.

Hope you have enjoyed this trip through one of my lesser used collections of figures, more from Troops on Parade soon.