A couple of years back I ran an Op Brevity game here at Castle R using our ever expanding pre 1942 desert collection of 28mm Figures. My goal in most of my scenario designs is to add a good dose of uncertainty and confusion so that the game could be played over and over again and never be exactly the same. 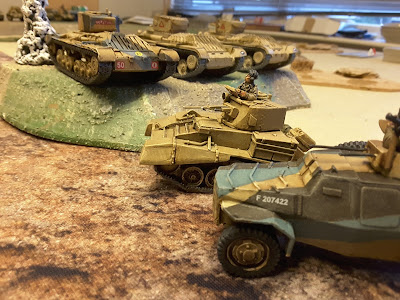 The last time we tried the game it was a great success with a close run finish, the British (with some South African help) won the day.

The basic scenario is a small Italian Force holding a defensive position being attacked by a larger British and Empire Force with a German Force racing to the rescue of their Italian Allies.

The link below will take you to the original post

We had some slight variations in orbats, the Italians started with two AB41 armoured cars rather than one and an AS43. The British had three players again each with a Company of Infantry (33 figs) a Sqn of tanks (3 Models) and two recce vehicles.

Also our reinforcement represented our current collections. The 3 British players started the game with either Valentines, A13s or a mixed Sqn of 2 Matildas and a Honey. 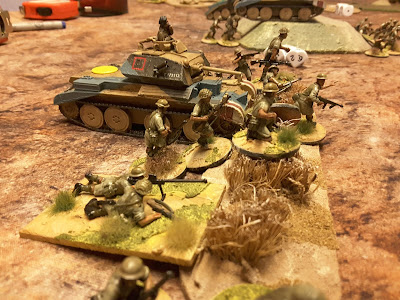 We played the game over a couple of day sessions with a cheeky evening game thrown in. Slow moving for some, but as I have said many times, we don't game quick because we don't have too, the table stays set up, the same players come back.

For the first day we were joined by our old friend Roger who had his first visit to the home of YG in a long time. For those of you who don't know Roger he has an excellent collection of figures, I may have given him a painting tip or two in the past which of course helped ;-)

You can catch his stuff on his blog GA - PA, here http://gapagnw.blogspot.co.uk/

On the second day one of Andys friends from that London joined us for some Yarkshire Hospitality, how cosmopolitan are we ! Still not drinking coffee though, "tha's in't Yarkshire, tha bloody well sups tea, reet"

The game developed as it did last time into three almost separate fights.

On the Italian right, Rob had decided not to occupy the hill on the edge of the table, in the last game this had left him a bit stretched and the British were able to break through a gap in the line and flank the fort. So this time he concentrated his units on the flank of the fort to face Roger and then Ian on the second day, who had the Matildas.

This flank saw by far the highest level of casualties, there were burning vehicles everywhere. The old recon adage of "drive down that road until you get blown up" came true more than once.

It wasn't long before Rogers 2 Marmon Herringtons were knocked out, but so to were the Italian AB41s, one rather embarrassingly to a light mortar round. But in their defence they had managed to rather fortunately take out the Honey, the Italians would take that as fair exchange.

Even the German Recon units which arrived as reinforcements didn't last long. But it was the Matildas that caused the problem, Fat Badger and Tubby Toad creeped slowly forward, shells bouncing off that thick armour.

But even the mighty fall, a well aimed shot and some lucky dice ripped a track off Toad causing it to grind to a halt (Matildas are that slow it did take the crew 3 turns to realise that they weren't actually moving any more). The Infantry shot each other to pieces and the flank ended in stalemate.

The centre was the quietest of the three, initially run by Ian, the British started with two CS9 armoured cars and 3 A13 Tanks. In typical Ian fashion he drove the CS9 straight down the road in the open where every gun in the Axis could see it, oh and the Luftwaffe turned up that turn too.

On the second day our southern guest took up the reigns and was a little bit more aggressive. One unit of South African Infantry excelled itself removing two companies of Italians from the table before it had to retire. But still there wasn't enough firepower to get into the fort, especially when a German Anti Tank gun added to it's fire power.

The other flank developed into a stalemate fairly quickly, all the Axis Armour had gathered here and the Italian Tanks were struggling to hit never mind damage the British tanks in front of them. The British were also struggling to finish off the dug in M13/40 tanks.

Things didn't help when armour reinforcements arrived for both sides on the same flank again cancelling each other out. A brave Company of British Infantry managed to sneak up on the tanks and attempt a number of close assaults but alas, for them they kept getting beaten back. 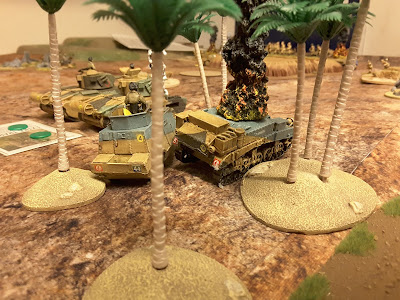 The Brits did manage to take out some Panzer Grenadiers as they entered the table but two rapid attacks by German Aircraft halted their advance and with it the last chance at breaking the stalemate on that flank. 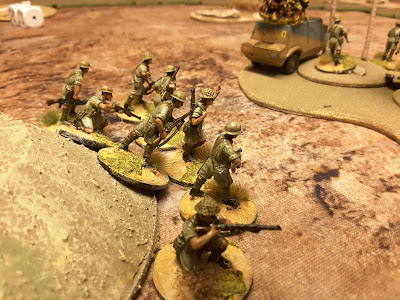 So there we have it a bloody draw but another good enjoyable Desert game. The Germans are getting a rest for a while as I have some Op Compass games lined up, some fairly short, so I'm hoping to rattle through a couple of those before Xmas.

Next up is ACW and the Battle of Champion Hill.
Posted by Yarkshire Gamer at 08:50:00 No comments: