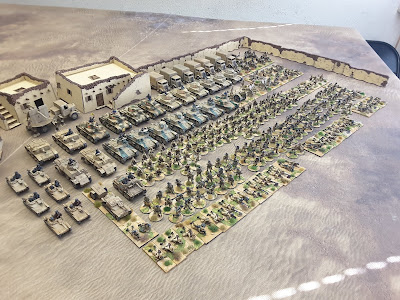 It's time for another episode of the occasional "Troops on Parade" feature here at Yarkshire Gamer in which I look at one of the various collections of figures here at YG HQ. This week it is the turn of my 28mm Desert Italians who have been a regular feature in the ongoing Op Compass Campaign reports posted here. 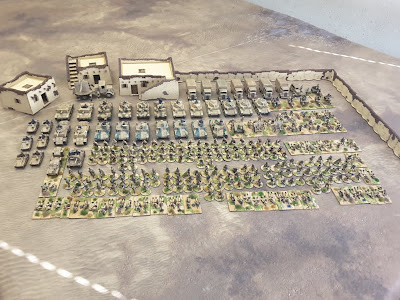 I've just completed a final batch of vehicles for the army and (stop laughing at the back) I think the army is finished, so what better time to do a review than now. In fact with no expense spared below is a hard hitting YouTube documentary where I drone on for 20 minutes about stuff.

For those of you without super fast broadband  😉 to download the video below is a more leisurely stroll through the various units involved. 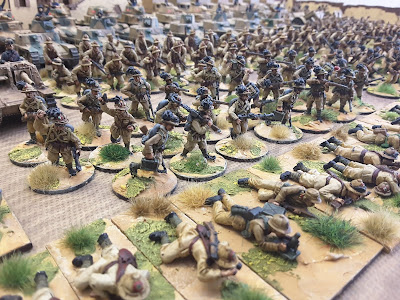 First up are some Bersaglieri, instantly recognisable from their helmet plumage (which is beautiful). A random purchase from the local Recon show a few years back when I couldn't find anything else to buy, there are 3 Squads of 10 men plus some command. 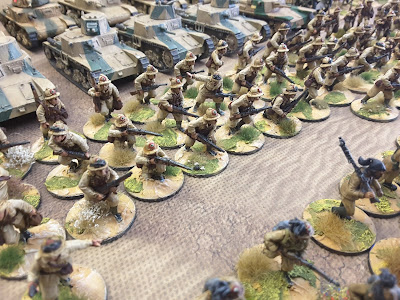 Followed by a big chunk of regular Italian Infantry, all metal from Perrys Miniatures, the Infantry had a strange organisation 1 squad of a Sgt and 11 Rifles and another of 9 men with two 3 Man LMG teams, I have 8 squads plus some spares for use as snipers etc. 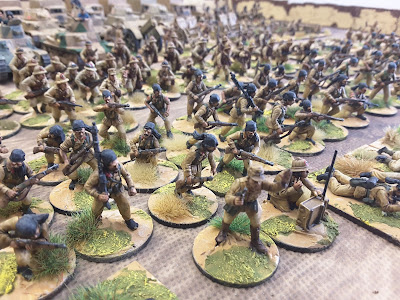 The final Infantry type, the Giovanni Facisti, a home conversion with Perrys plastic Afrika Korps as the base. Heads from the plastic ACW plastic box set , a total of 6 squads and command in the collection. The dismounted support weapon includes 3 47mm Anti Tank Guns, a couple of 20mm Anti Tank Rifles, 2 HMGs and a Mortar. I'd like some 65mm Infantry Guns but no one makes them. 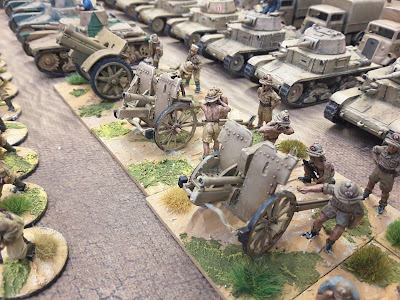 Artillery support comes from 2 x 75mm Field Guns from Perrys and a 100mm Gun from Warlord. 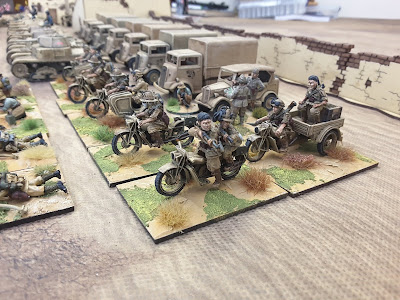 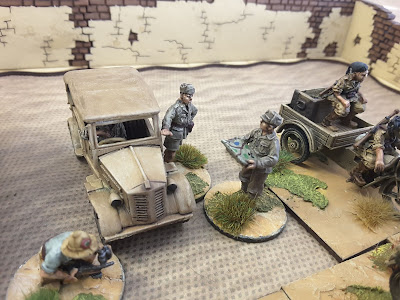 Command of the army comes from this rather swift Italian Command Car avaliable from Perrys. Soft Skin transports are a bit of a cheat, these are metal "collectors" miniatures from a Company called Days Gone By. They are a bit small but can be bought on eBay for a couple of quid each, which is a lot better than 20 or so for a 28mm truck (If you can find an Italian Truck), so this lot was 15 to 20 pound instead of £140, that's the tight Yarkshire Man !

The models come with company logos on etc but nothing that a light sanding and some black primer won't sort out. I have just painted them as normal and added an Italian Divisional symbol to the doors and there you go.

The type of truck I have used is a Fordson as the front grill resembles a Fiat 626. 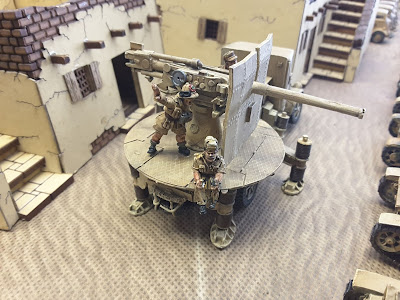 There is a bit of a beast lurking around at the back of the group, a 90mm Breda Anti Aircraft gun mounted on a lorry with crew. Used in an anti tank role similar to the German 88, it's an old model which has yet to see action on our table. The model is from Company B which used to be imported into the UK by The Wargames Command Post, I'm not sure if they have a current UK distributor. 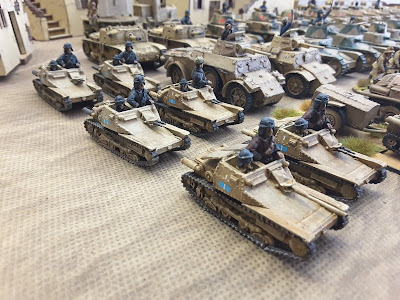 Moving onto the "armour" starting with the tiny L3 Tankettes, 6 of them. 5 have standard armour and 1 with a 20mm Anti Tank Rifle. Sold by the Perrys, having stood next to one in the Tank Museum I have no idea how two blokes got in one. 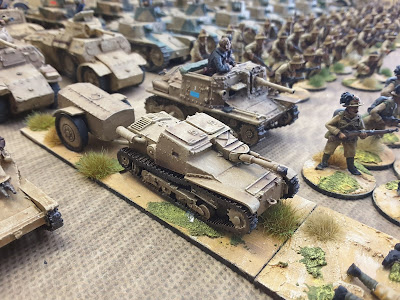 A couple of odds, a flamethrower version of the Tankette from Empress Miniatures, seriously who would get in one of these, not only are you cramped into one of the smallest poorly armoured vehicles of all time, you're towing a bomb !

Being that is a 47mm Semovente Tank Destroyer, a bit after our time frame but a nice model from Perrys. 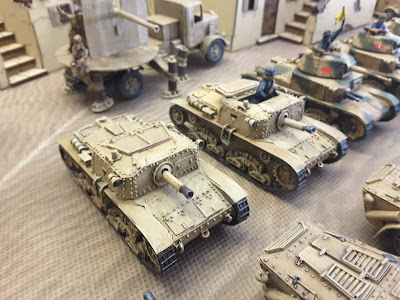 A pair of Italian self propelled 75mm Semovente, they arrived in North Africa in Dec 1941 (just within our cut off point) but didn't see action until 1942. These are the Warlord Games version. 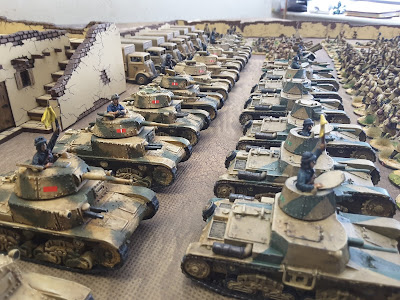 Proper armour next, on the right is the M11/39 tank, the first proper tank for the Italians, a twin MG turret with a 37mm gun in a pivot mount in the hull, great for colonial warfare not so great against British Tanks. They had their first outing on the table recently, report coming soon. 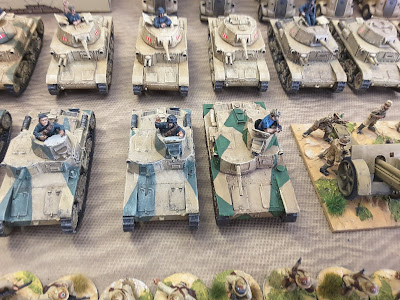 I have 7 of the 11/39 tanks, 6 Blitzkrieg Miniatures 1/56 versions and one from Company B, the latter is considerably bigger and is closer to the Warlord Games 28mm scale. 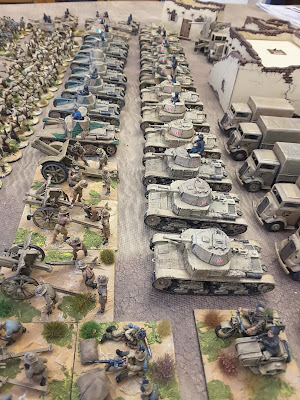 Final tanks are the more modern M13/40 tanks, 10 in all, all from Blitzkrieg.

So this is a project that started out as a "box of plastic" and a couple of Tanks and this is just the Italians, let this be a warning to you all 😂
Posted by Yarkshire Gamer at 10:09:00