Welcome Ladies and Gentlemen to the latest "project" here at Yarkshire Gamer, having completed the largest Naval Battle of WW1 we thought we would move onto recreating the War in the Desert from June 1940 to December 1941.

So this will be the first of hopefully many games recreating those early years of the war using some of the worst tanks and troops of the period on largely featureless terrain with the odds massively stacked against one side. If you think WW2 is all about Tigers and Panthers fighting on a 6 x 4 table with 1000 points a side, I would look away now !

We will be using 28mm figs and vehicles from a variety of sources, mostly Perrys, Blitzkrieg and Warlord. We are using a set of rules created by me based on Iron Ivans Disposable Heroes set with some Unit Card Activation, Random Events and other general YG fun thrown in. The games themselves should work with any set of rules based on a 1 veh = 1 model scale, so the popular sets of the day like Bolt Action or Chain of Command would be fine, Flames of War probably not.

Rather than tedious map moves and complicated logistics being the back bone of the Campaign, I will use my favourite method of "linked scenarios", so each game will be independent of another but the result of each game affects the outcome of the Campaign as a whole.

The games are based on the book Operation Compass by Robert Avery which is sold by the toofatlardies for their "I ain't been shot mum" rules. Although I have changed a few things round to make the scenario work better for us I highly recommend the book as a great source of information and ideas. You can pick it up HERE for seven of your English Pounds.

It's the 14th June 1940 just a few days after Mussolini has declared war on Britain and France, after a couple of nights of British Light Forces making a spot of noise it's time to get serious and push on into Italian held territory.

The scenario is best run by an umpire who if required can take on the role of the Italian Commander with no problems at all, we ran it with the Umpire plus 3 players controlling the British.

It's essential if you are playing the British in this game to not read either the Italian briefing or the Umpires Notes.

I usually do a map but for this game I will make an exception because it's so simple. Use a 12ft by 6ft table covered in some sort of desert cloth (I do love our new "print yourself" Desert Map) with no features on at all apart from a single track road down the centre of the table from short edge to short edge.

You will need to be able to split the length of the table into 12 separate 1 foot zones, luckily our road sections are 1 ft long so it was easy. 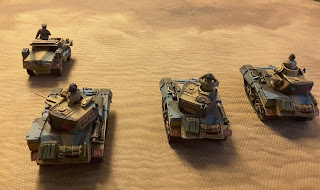 Sir, you are leading a small light armoured force through the Italian lines, the main army is to your South attacking Fort Capuzzo and you must crack on to make sure that their flank is suitably protected.

You have this session of gaming (we did 3 hours) to get at least 3 vehicles off the end of the table.

Intel suggests light Italian Infantry Forces are in the area supported by Artillery and the approaches are likely to be mined.

Going is "Good to Soft" roll two d6 before you move any vehicles off road and inform the Umpire of any doubles.

Other than the road the table is empty, carefully use your spotting rolls as you go.

You have 1 HQ / Art Observer in a Damiler Dingo

All troops start on table in the 1st section of the table.

Note : We used the 13 early war light vehicles we had available, use what you have, Rolls Royce ACs etc, we had three players but ideally this scenario would be best with 4. 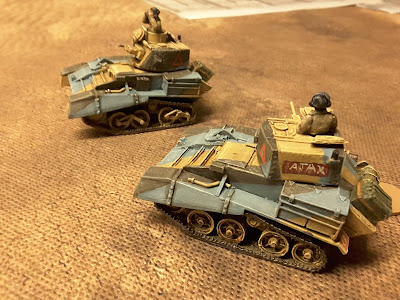 As Umpire I played the Italian Forces as well as there really isn't much for them to do other than roll dice.

If you are the Italian Commander you have a thankless task. With minimal troops, most of which can't damage the enemy, you need to slow the enemy down, using any means you can, stop the British exiting your table edge.

Your engineers have laid mines to your front but their exact location is unknown.

Before the game starts secretly decide where you wish to place the trench sections, they should be in the 3rd of the table furthest from the British Start Line.

The secret of making this scenario work is the Umpire making the British players paranoid !

Unit Movement - Every time before a British vehicle moves off road, the player in charge of the model should roll 2 d6, any double 1, 2 or 3 and the vehicle bogs down that turn, no movement, free to move next turn.

On a double 4,5 or 6 it's a bit more serious, we have specific breakdown rules to cover this, but you should use whatever you have in your rules. Roll a d6, 1 is a misfire and it continues as normal, 2 a bog down for 1 turn, 3 to 5 is a breakdown which gets harder to fix, a 6 is a full not being fixed this game. 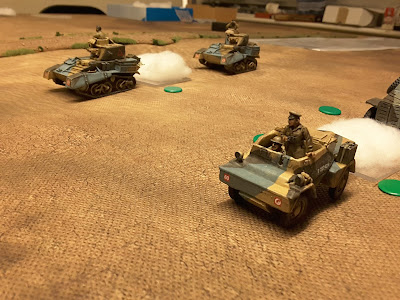 Sectors - The table is divided up into 12 separate segments, the British start in segment 1 which is free of mines and Italian Troops.

When a British unit enters a new segment for the first time or spots into a segment that hasn't been cleared the Umpire should roll a secret d10. The basic chance of segment 2 being mined is 1-3 on a d10, if that area doesn't have any mines add 2 to the chance of having mines in the next area, so area 3 would be 5 or less on a d10, area 4 would be so 7 and so on.

When an area of Mines is discovered the next segment starts on a 3 again and so on to the edge of the table, segments with Italian Troops in have no mines.

Spotting - your rules should have some form of observation rolls in them, I would make it impossible to see mines unless the unit is looking into the adjacent segment and even then it shouldn't be easy. The Italian trenches should also be well hidden and difficult to see until the units within open up.

Mines - again you should have your own rules for these, they shouldn't be too powerful but enough to scare the British. Once detected I allowed the British to pass through the field so long as they did so at minimum speed whilst performing no other actions. Once a unit has passed through a minefield a clear path is created and units can pass through as normal, subject to the movement rules above. The chance of encountering a mine on the road doubles.

Everyone rather enjoyed this little one night scenario, I think the combination of the time limit and the lack of certainty about what enemy / danger being faced added to the tension of the game.

The British managed to get some mines in sector 4 and one of the Marmon Herringtons managed to loose a wheel at it's first attempt at moving through it.

One of the Mark VI Light Tanks proved to be rather unreliable, breaking down twice and for good measure also getting bogged down in the sand.

The British on the north side of our table came off worst against an entrenched HMG, there isn't a lot of armour on a CS9 Armoured Car or a Marmon Herringtons for that matter and with some decent die rolls the HMG was able initially to take out the steering on a CS9 before knocking it out the next turn.

The Italian Artillery proved pretty useless, but in its defence it was firing at fast moving Armoured Cars and needed a spot of luck to get a hit, luck which never arrived. The British guns however once they had spotted the Italian trenches was able to keep up a decent rate of fire which caused a few casualties and kept the heads of the Infantry down.

The Italian 20mm Anti Tank Rifle proved to be highly accurate, hitting the Mk VI Tanks a few times but the damage rolls where not so successful, minor damage only.

The Italian HMG managed to take another Armoured Car out as it approached the Italian trenches, this time a Marmon Herrington, but the heavy weight of British machine gun and artillery fire on the trenches either killed or pinned the Italian Infantry and the game was over, 2 Mk VI Light Tanks (the other had, you guessed it, broken down again) and a Humber scorched through the lines.

It got a bit tense as there was still two segments to go to the end of the table, with time running out it was pedal to the metal for the Brits, luckily the dice for the mines in those last two segments rolled negative and the tanks were away. 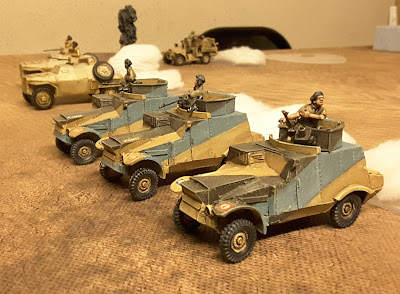 So a victory for the Brits and fun for all, I hope to run the second game at the back end of February but next up on the table will be our annual trip to WW1 Mesopotamia, having fallen back from the victory at Ctesphion the forces of the Empire more adventures are in store in the retreat to Kut Al Amara.
Posted by Yarkshire Gamer at 19:52:00