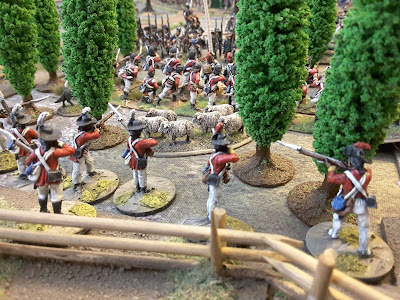 A few weeks before Xmas we held a refight of the morning action at Monmouth Courthouse using 28mm figs and British Grenadier Rules.

We based the game around the scenario in the 2nd of the Scenario Books for British Grenadier, I highly recommend these as a great source of information and ideas.
Caliver Books would love to sell you a copy here !

One of the attendees at the game has already done a comprehensive AAR which can be viewed HERE so I will use this post as a general guide to the scenario and a good excuse to post some pretty pictures, if an excuse is needed !

Above is a photo of the game table set up with no figures on table, it's our usual 12 x 6 table, closest to the camera is the American entry point, the British entry point is in the far opposite corner. There is a small village on the British left with an orchard in front of it (yes, there is a palm tree in there, it's special homage to the person who tried to argue that there are no palm trees in North Africa !). A further Orchard in the mid distance and a couple of open woods, but generally the terrain is quite open.

The factor to add in for this battle is the heat, sources suggest that there were more casualties on the day due to heat exhaustion than there were due to gun fire and bayonet. British Grenadier covers this by converting excess disruption into casualties but if you use a different set you may need to come up with another mechanism to reflect this.

This is adapted from the BG orbat to match our figure collection, all commanders are Average unless stated.

On table around Monmouth Courthouse,

The baggage train, which starts in Monmouth and needs to travel to the British Entry Point. The British need to ensure the safe exit of the baggage before entering a general engagement.

All the rest of the British enter the table from their entry point at the other end of the table in column on the road.

Turn 8 Websters Brigade (Excellent) 4 x British Infantry Battalions 2 x 16 and 2 x 20 Fig units 1 Elite (Yarkshires of course ! And yes I do know that it didn't officially become that for another 4 years) the rest 1st Line

We found that the turn thing went to pot quite quickly as the rear of the column from the previous Brigade hadn't cleared the entry point. 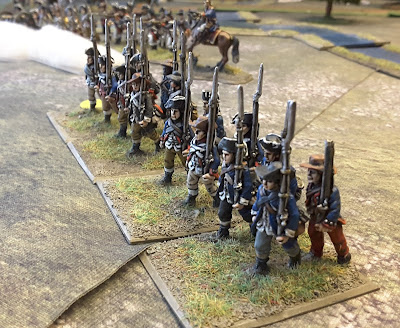 Turn 1 in column with the head of the column at the edge of the woods in front of the Monmouth Orchard.

Note the BG scenario doesn't give American Artillery calibres so we rolled a d6 when each gun arrived on table 1-3 was a 3pdr 4-6 a 6pdr.

As with the British the turn sequence goes out of the window very quickly, with 1 entry point the rear of the column in front won't clear the table so an off table traffic jam ensues.

After the last American Unit has entered the table the American commander rolls two d6 in the command phase of each turn until they roll a double.

If double 1,2 or 3 next turn Col Morgan (Excellent) arrives at the entry point with his Brigade of 2 x 20 1st Line American Infantry Battalions with 12 1st Line Skirmishers.

If double 4,5 or 6 next turn Dickinson arrives with his Brigade of 3 x 16 Militia Infantry Battalions.

It's either or with the American reinforcements, not both.

How did we get on.

No detailed AAR here as Roger has done a cracking job on that already (see link above).

We weren't that far off history too be fair, the British managed to shield their baggage train off the table.

The Americans pushed on with their initial bigger numbers and pushed the British out of Monmouth but not without one hell of a battle for the orchard with the British Light Battalion holding back 3 American Infantry Battalions at one point, although the 4th one in the rear proved to be the end. 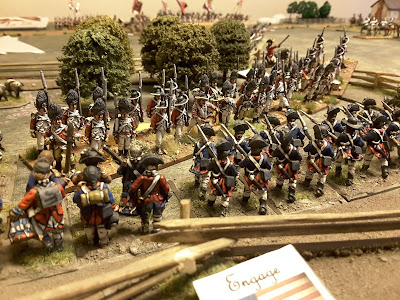 The American Forces had pushed on into the Cider Orchard but they arrived at the same time as the British Grenadiers and the Hessians and the second battle of the orchard began, this time it was the British who were victorious.

The increased British numbers started to tell and the Cider Orchard was cleared when the Hessian Infantry managed to out flank it. 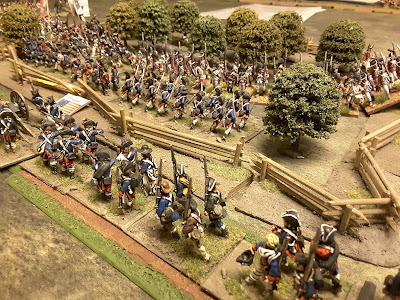 One of the British Grenadier Battalions had held the open flank of the Cider Orchard while this was going on, it had taken one hell of a beating, down to 50% strength it finally gave way, unfortunately for the Americans the 12pdrs and Howitzers deployed in the gap in the line.

The British now had the advantage in numbers even though the American reinforcements were on table and the American Commander decided it was time to withdraw. 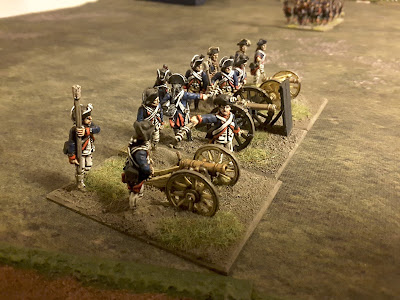 Another good game of British Grenadier with one of my favourite collections of figures, it will no doubt be 12 months or so until they are back on the table again, most likely to do the afternoon section of the same battle.
Posted by Yarkshire Gamer at 09:56:00