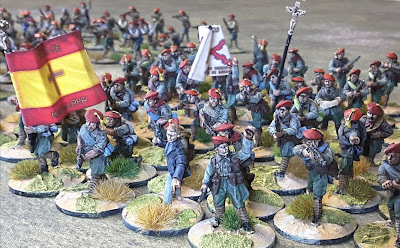 If you're not aware, Troops on Parade is a regular here at Yarkshire Gamer, usually during quiet gaming periods I take the opportunity to put a collection out on the table in its entirety, click a few snaps and make a bit of a Utubes movie to record everything in one period together in the same place at the same time, something that, even during a game wouldn't normally happen. With lockdown those opportunities are more frequent. 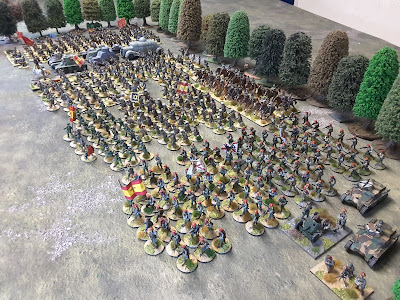 Above is the Spanish Civil War collection in all its glory, according to The Great Wargames Figure Count there are just short of 500 28mm figures here. It's one of the collections where a few of the others have decent sized forces so I don't personally own some of the various factions of the SCW, Falange, CNT, POUM etc, they are in other people's hoards.

Above is the Utubes video covering the collection, the rest of the post covers the same info but with still pictures rather than moving ones. 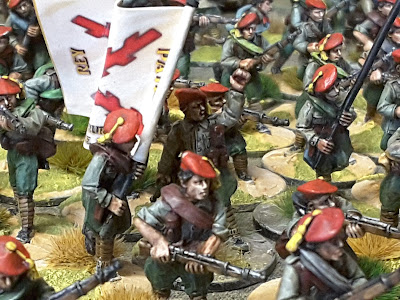 The picture above is of the Carlist Force, these are the troops I usually use in a game. Although completely impractical in modern warfare, I love the yellow tasselled Red Berets, they really stand out on the table. They probably also really stood out to anyone shooting at them as well. Our rules have a basic unit as a 4 fig HQ section and 3 x 8 figure sub units. There are 4 such Carlist "Companies" in the collection. 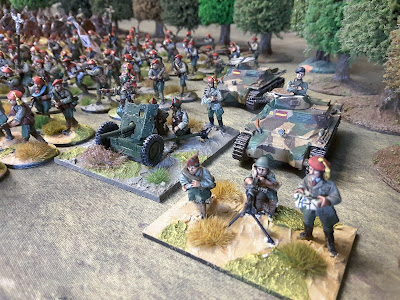 In addition to the infantry there are some Carlist support units, here we have a HMG and an Anti Tank Gun. Also in shot are a couple of Panzer I, metal models from Empress. 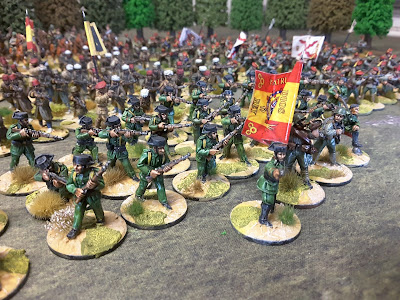 Next up are the Guardia Civil, a very distinctive unit in its mid green uniform, yellow braces and rear upturned head gear, a uniform that remains largely the same today. This unit contains a few figures from the old Anglican Miniatures range which are now made by Templar Miniatures (apologies I forgot the name whilst doing the video). 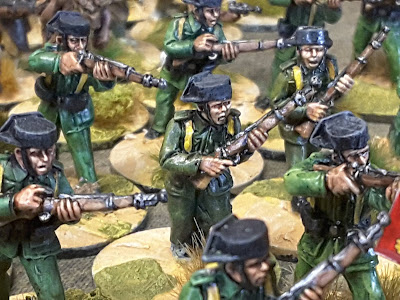 A versatile unit that could be used on both sides of the fighting. 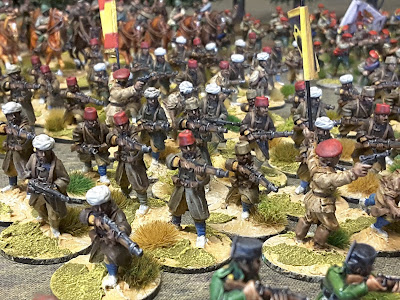 Behind them are two units of Moors. Most of these figures come from North Star, who randomly do some Moors and some International Brigades but nothing else. One of the regular gamers here Rob has quite a few of these, we needed a few more for our Jarama refight so I invested in these. The Command figures are from Templar. 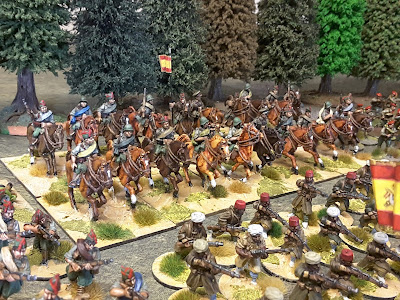 Next up is a rather lovely (even if I do say so myself) mounted unit of 20 figures, gorgeous models from Empress and definitely one of my favourites from the SCW collection. 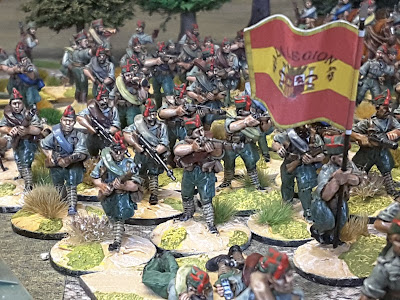 The first figures I painted for the collection were these Spanish Foreign Legion, these journeyed from Africa with Franco and the Moors at the start of the war. There are 4 units in total. Looking at the photo reminds me I never got round to putting a layer of Matt varnish on these. 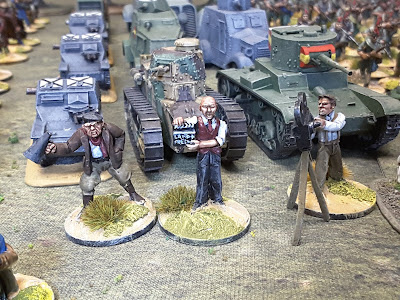 These three figures are a film crew I painted up for our University City Madrid 1936 Game (note the Land and Freedom on the clapper board. It was a great fun game and I recommend you have a go at it if you play Spanish Civil War. 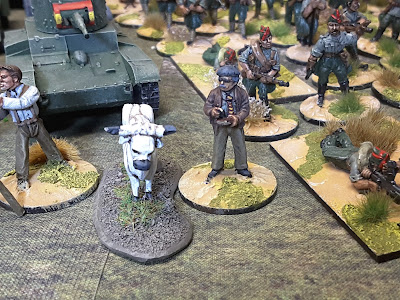 Also featured is the Legendary Mad Bull (see our game write ups) along with a Ernest Hemingway figure sporting a Bradford City tie. 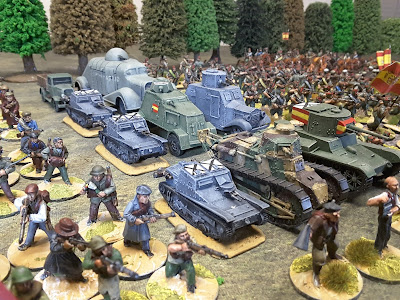 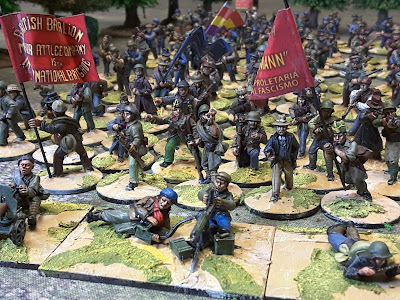 I do have some opponents in my collection, 4 units of International Brigades, the British Battalion, the American Abe Lincoln Battalion, the Canadian Mac Paps and Conolleys Irish, plus 3 supporting Maxim Guns. 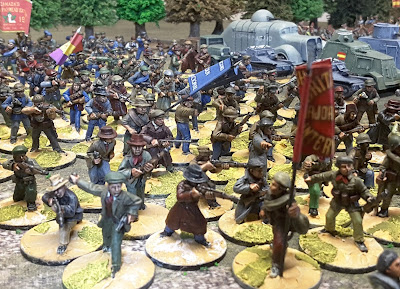 I used loads of different figure manufacturers to make up the International Brigades in an attempt to get the most ragged look possible. There are Empress, North Star, Warlord WW2 Partisans, Irish Rebellion and Footsore. 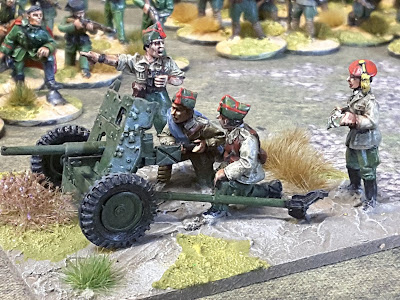 The quality of the figures is just superb and it was definitely a "shiny" moment that got me into the period, but they have grown to be one of the favourite games we do here at Yarkshire Gamer. 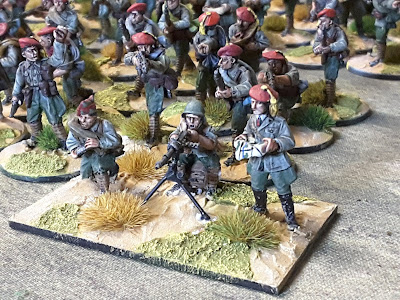 Hopefully things will return to normal soon and these will once again grace the Yarkshire Gamer table. 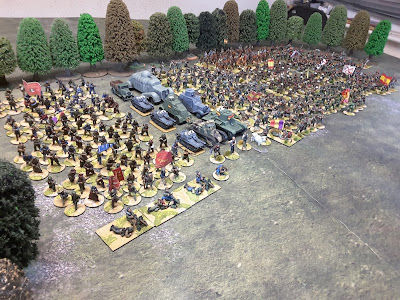 So there we have the Spanish Civil War collection. I doubt our traditional WW1 Mesopotamia Christmas Game will go ahead so I will probably do a TOP feature on that collection instead.
Thanks for watching and reading, it's much appreciated. Blogs seem to be going out of fashion, in favour of the more instant Twitter, Facebook, Insta platforms and hits here are a long long way down on the highs of a few years ago, where and what I do with the blog format is something I am currently mulling over.