Regular readers will know that it was my plan to debut my Garibaldi Project, Battle of Mentana game at FIASCO this year. Sadly I haven't been able to get the French Infantry Battalions I need for the game as I wait for the Perrys to release their FPW French Plastic Box set.

So I had a 12 x 6 table booked at FIASCO with nothing to put on it, the easiest thing to draw the crowds is the Italian Wars so I put together a game on short notice with the Fornovo game collection and a few extras. There was no time to sculpt terrain or build bespoke buildings, this is what you would get if you gamed at my house. 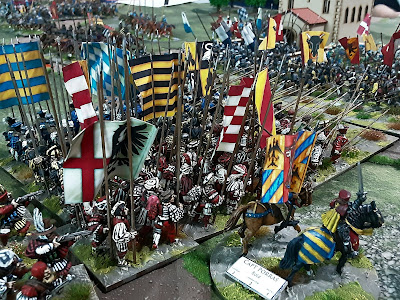 The scenario is a very loose one, Cesare Borgia was commanding a French / Swiss / Papal force in northern Italy in the late 1490s, he laid seige (twice) to Forli a walled town containing one Caterina Sforza who was the Countess of Flori and daughter of the Duke of Milan.

In 1499 Cesare met up French forces outside Forli and after a short Siege he entered the town and Captured Caterina. This game is based on a what if, that being Caterina Sforza persuading other Italian States and hiring German Mercenarys to break the seige with a pitched battle outside the walls. 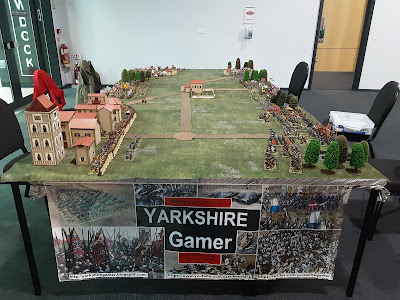 The table itself was my standard 12 x 6 table with a basic terrain layout, with just under 1,500 figures on the table I wanted plenty of room to move.

The Papal Forces are set up on the right (as viewed) of the table and the Sforza Forces on the left.

There is a basic road layout on the table and along the Papal edge there are three woods effectively to split up the three commands of the Papal forces.

The Sfoza side of the table had a large walled town representing Forli covering the first part of the table followed by a couple of randomn woods.

There were two small farms on the far end of the table and a walled Cemetery which of course was the Dead Centre of the table. 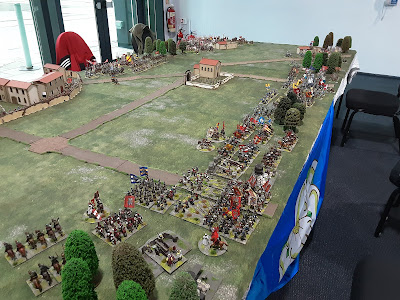 The above photo is looking along the Papal Lines, nearest the camera is Cesare and his boys, in the middle a Swiss contingent and at the far end the French.
The Papal Forces opposite Forli consisted of
Force Commander Cesare Borgia
Infantry Commander with
2 x 48 Figure Pike Blocks each with 16 attached shot
1 x 24 Papal Foot Guard
1 x 24 Papal Sword and Shield
3 x Heavy Guns, emplaced.
2 x 6 Mounted Arquebus
Cavalry Commander with
3 x 6 Familia Ducal including Cesare Borgias Bodyguard
3 x 6 Condottieri 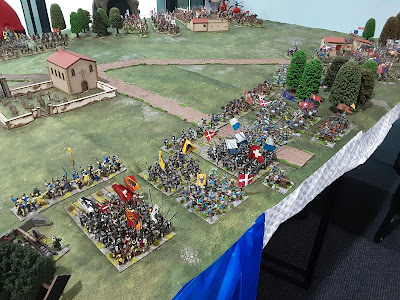 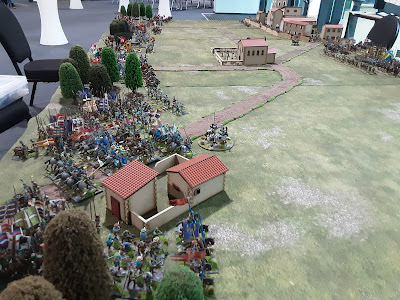 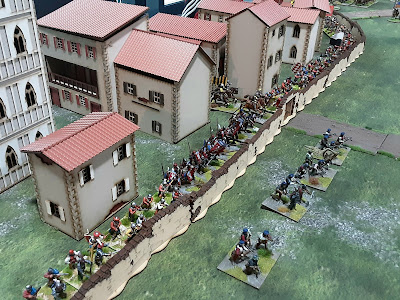 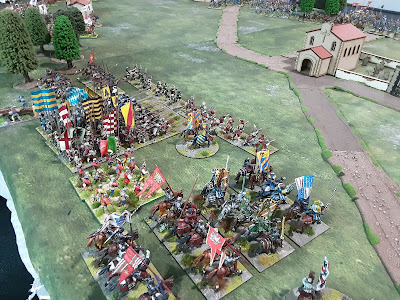 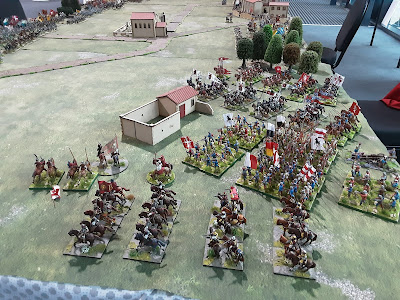 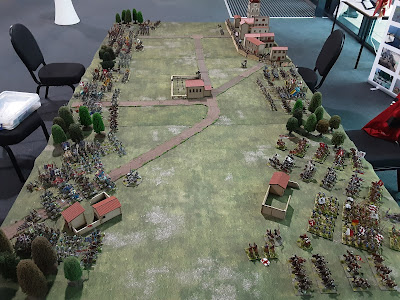 The above photo shows you the battlefield from the opposite end of the table, looking towards Forli at the end of the table on the right.
For rules we used our usual adapted Furioso. When we ran it at the show we had 3 of the 5 players who had never used ghe rules before and they were pretty much upto speed in a couple of turns. 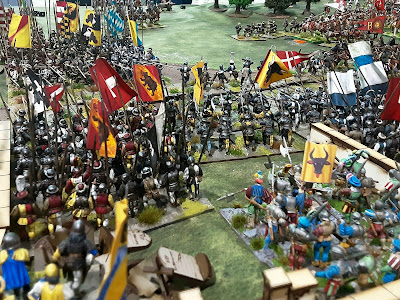 How did we get on ?
The first thing to say is that my priority at a show is to talk to people and bring a bit of life to the game, so getting the game finished or even close to a conclusion is not always possible.
On the Papal left, Cesare Borgia did a bit of remonstrating outside Forli but never really pushed an assault at the walls which would have been interesting. Cesares Cavalry drifted towards the centre of the table towards the Condottieri attached to the German Mercenarys, this ended up in a pretty even stalemate. 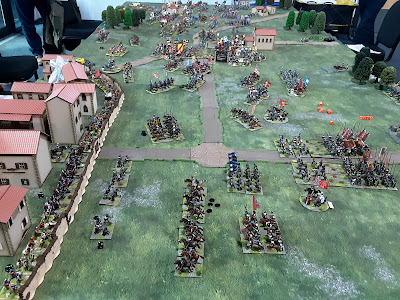 The main action happened in the centre with the huge 128 figure Landsknechts block smashing into the two Swiss Blocks. Absolute carnage ensued but with the additional Polearm units the Swiss were able to flank the large Geman block and come out as winners. 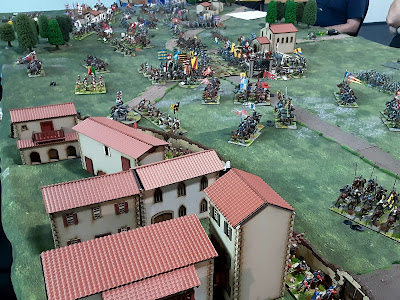 The far side of the table saw the two large Cavalry forces clash, it was no surprise to see the French victorious  but the Italians were able to put on a decent fight of it and hold the French Infantry up so that they never got close to getting into action.
So with the Swiss punching through the centre it was a victory for Cesare, but the most important thing was everyone, including the new players enjoyed the game. 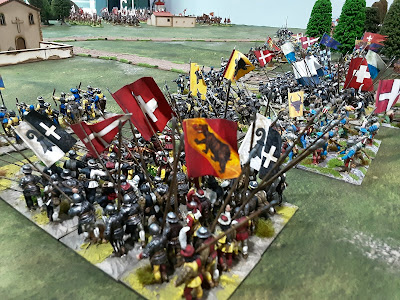 A Review of the Game and Scenario
I always like to look back after a game and see what happened and how if at all it could be improved. As I said at the start of the post this was very much a rush job. The scenario was intended to be part of my Italian Wars book for Helion but since I have handed over responsibility for that book I haven't worked on it any further.
Usually I would play test a few times before releasing but as it wasn't going to be used in the book it was a great place to start and this effectively was the first play test.
On reflection I think the game was pretty well balanced, the Sforza Forces definitely didn't take advantage of their Firepower or use their light Cavalry to their best advantage however the Swiss Centre was a lot stronger than its opposition so I will be looking to bolster the German Mercenarys for the next game. 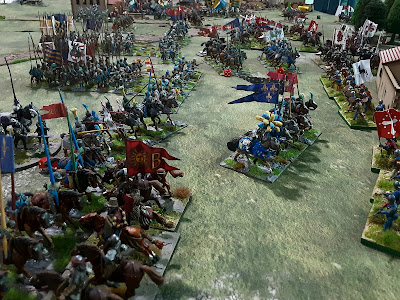 I will be taking the game (with modifications) to my local show in Pudsey. Recon will be happening at Pudeey Civic Hall on December 3rd 2022, come and say hello.
Posted by Yarkshire Gamer at 03:09:00