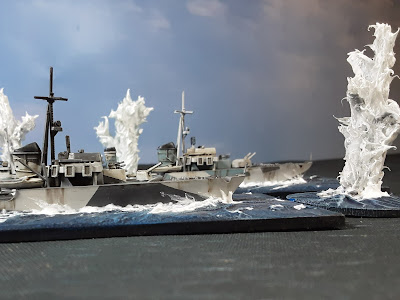 I've been slowly building up some 1/700 WW2 Naval Ships from plastic kits over the last few months and a couple of weeks ago I took them down the Leeds Wargames Club to give them a run out. 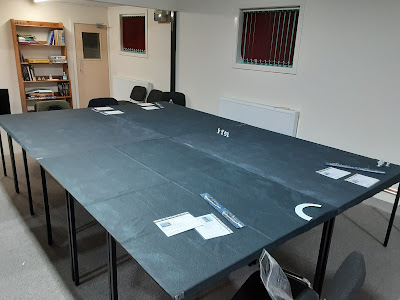 I am fortunate to have a 12 x 6 table at home but that isn't big enough for these ships so I  set up a 12 x 8 table at the club to run a test game with the ships I have. We use an established set of WW2 Naval rules which I wrote 25 plus years ago, they were adapted for our WW1 games as well so everyone is familiar with the mechanisms so it's absolutely pointless to change them.

However I do need to examine the move distances and gun ranges to move them up in scale from our 1/3000 WW2 games and our 1/2400 WW1 games. I am not looking for an exact model scale to ground scale that would need a huge expanse, however neither am I definitely not looking to go down the Warlord Games route and get the whole of Midway on a 6 x 4.

I'm looking for a happy medium, something that is playable on a table I can manage (which is very Big) which looks right without prescribing to a precise mathematical formula. If I can make a 8 ship Destroyer Action work on a 12 x 8 I'm in the right ballpark for a large ship Action on say a 36 ft table. 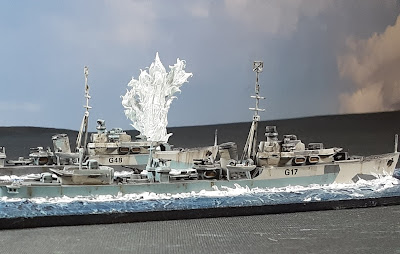 So the British started the game with 2 O class Destroyers, HMS Onslow and HMS Obedient (with the 4"QF Guns) pictured above. 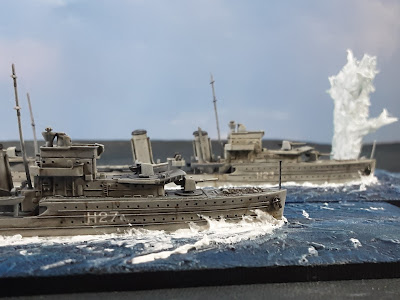 Along with 2 E Class Destroyers, HMS Echo and HMS Electra (pictured above) 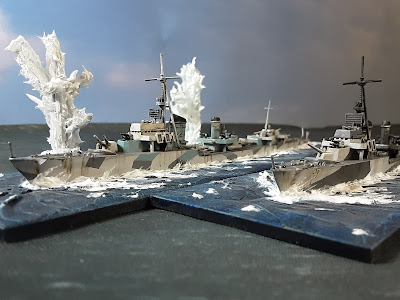 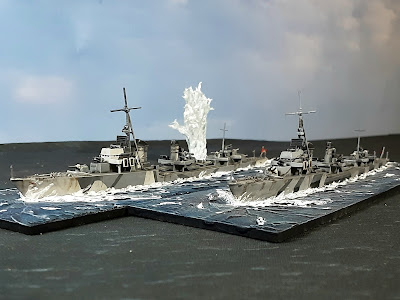 The Germans had 4 Destroyers Z31, Z32, Z33 and Z37, much larger than the British Destroyers they are also armed with 5.9" Guns, a couple of the ships have 5 Guns with a double turret at the front, the others 4.
These ships are more than a match for the British ones so we decided to only use 3 of the 4 ships and just move the 4th ship around as a dummy so it looked good. In true Yarkshire Gamer style we forgot we weren't using the 4th German Destroyer straight away and the British were in for it from the start.
For this test I was using a movement scale of half an inch per knot (from half a cm per knot for the 1/3000 ships) and had exchanged cms for inches on our firing charts which gave the British Destroyers a range of around a metre (in French Money) and the Germans slightly longer. 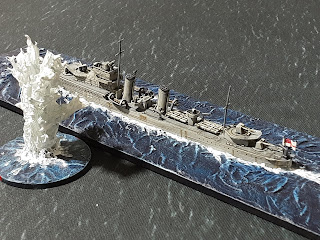 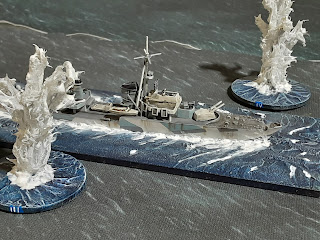 Things got hot pretty quickly as the ranges closed quicker than I had expected. If you look closely at the Splash Markers you can see small colour coded numbers, these are to enable us to remember which ship fired at which ship. In the WW1 games I have built shell splashes for each ship however these more scenic ones for the larger scale WW2 games are much more time consuming to produce so I have decided to number these and allocate them to a ship on a game by game basis in steady. 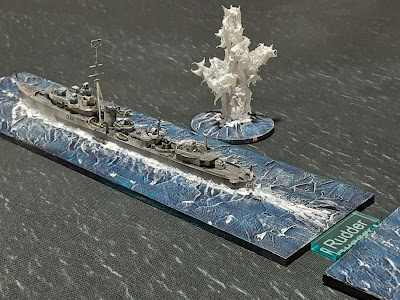 One of the joys of Naval Gaming to me is the randomness of the damage, you can plug away at a ship for move after move and hit nothing critical, smashing up a few boats or scaring the ships cat, or you can get luck with your first hit and damage something a bit more important, HMS Echo suffered damage to her rudder on turn 2 forcing her closer to the approaching German ships. 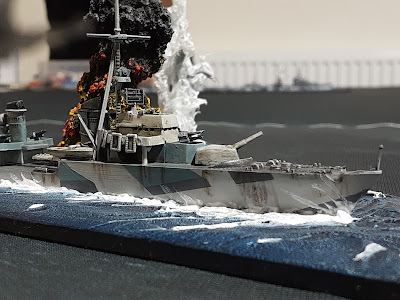 But it wasn't all one way traffic as a direct hit on one of the Torpedo Tubes on the deck of Z37 started a fire. 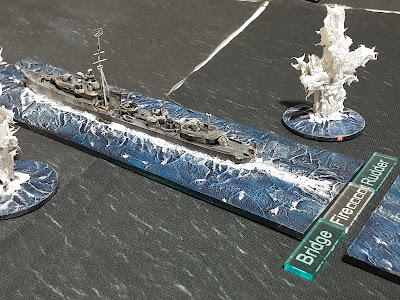 The next turn got a lot worse for Echo, stuck on a set course she was an easy target for the Germans and a number of hits caused extensive damage to the Bridge of the ship, whilst other hits caused a fire. To make matters worse attempts to repair the rudder failed. 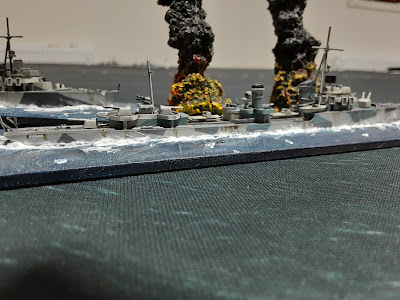 It was going so well for the Germans until the Commander of Z31 got it all wrong. We write down our moves in secret at the start of each turn on the rear of each ship card, there was a slight miscalculation on the part of the Kriegsmarine and the words "Starboard 8, forward, oh f#*k" were clearly heard as Z31 slammed into the Port side of Z37 causing uncontrollable flooding in the latter ship. 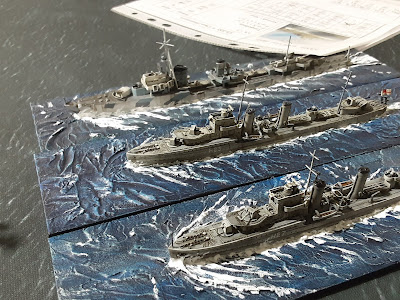 In the end the British lost both E Class Destroyers to repeated hits from the Germans whilst the Germans lost Z37 through poor driving skills !
One O class and Z31 were badly damaged but a clear if not unexpected victory for the Germans. 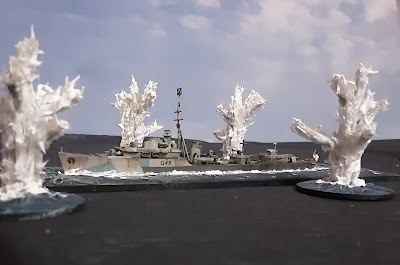 So on reflection, the rules were fine, I know they work, that wasn't in doubt we have used them for that long. We didn't use Torpedoes in the game solely because I have not made any markers for them yet, and to do that I need to settle on a movement scale. The one thing we did find is that the ships felt as if they were moving too quickly and ranges closing extremely rapidly.
I will return in a few weeks and try a second play test this time using 1/3 inch per knot and see how that works. Remember I am looking for the right feel to the game not the exact scale conversion.
In addition I've added a couple of videos to the build the Bismark series
Until next time, Sithee
Regards Ken
The Yarkshire Gamer
Posted by Yarkshire Gamer at 08:29:00