Welcome back everyone, to the AAR of Guilford Courthouse,  following on from the success of the scenario post we bring you the action.

WARNING : This post will contain pictures of Highlanders in kilts ! Guards in bearskins, no Cavalry and a picture of a British unit retreating.

The Brits began as expected, the Highlanders and Hessians advancing on the right, the 33rd and 23rd on the left with OHara bringing up the rear, onwards towards 2 brigades of American Militia, there could be only one result surely.


Early in the game I (playing the Americans) had one of those turns when you wish the luck you just had on the wargames table was actually in a casino. All along the front I rolled nothing less than an 8 on 2d6 and rolled back to back double 6 against the Highlanders with a battalion and a 6pdr loaded with grape. For those not familiar with the British Grenadier rules a double 6 gives you 2 extra casualties and a risk to nearby officers, the officer escaped unharmed, the battalion did not.


The attack on the right faltered under the heavy fire and the Highlanders already with 50 percent casualties weren't going to take an active part for the rest of the game. The attack on the left was much more successful, not facing any artillery and supported by a 6 pdr the British steadily whittled away the Americans with sustained accurate musketry. Being Militia they could only rally dps whilst stationary with a general attached, so once the units had 3 dps the casualties mounted up, until the inevitable happened and the line broke.


On the right the Guards had pushed forward to take the place of the Highlanders and the pressure from them and the risk of being flanked broke that side two, the 6pdr gun which had fired the first shot of the day and decimated the 71st Managed to escape and redeploy within the second line. 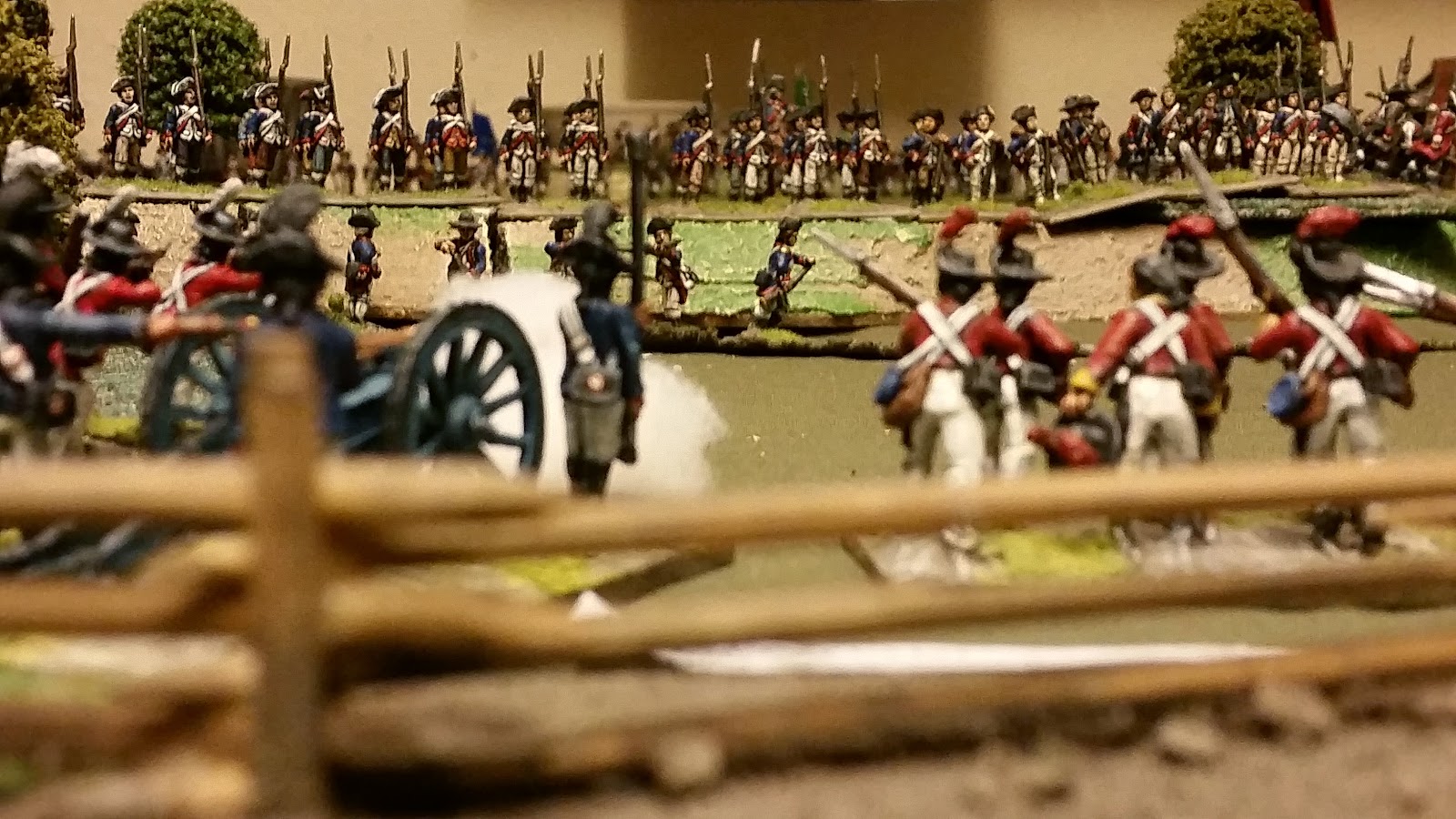 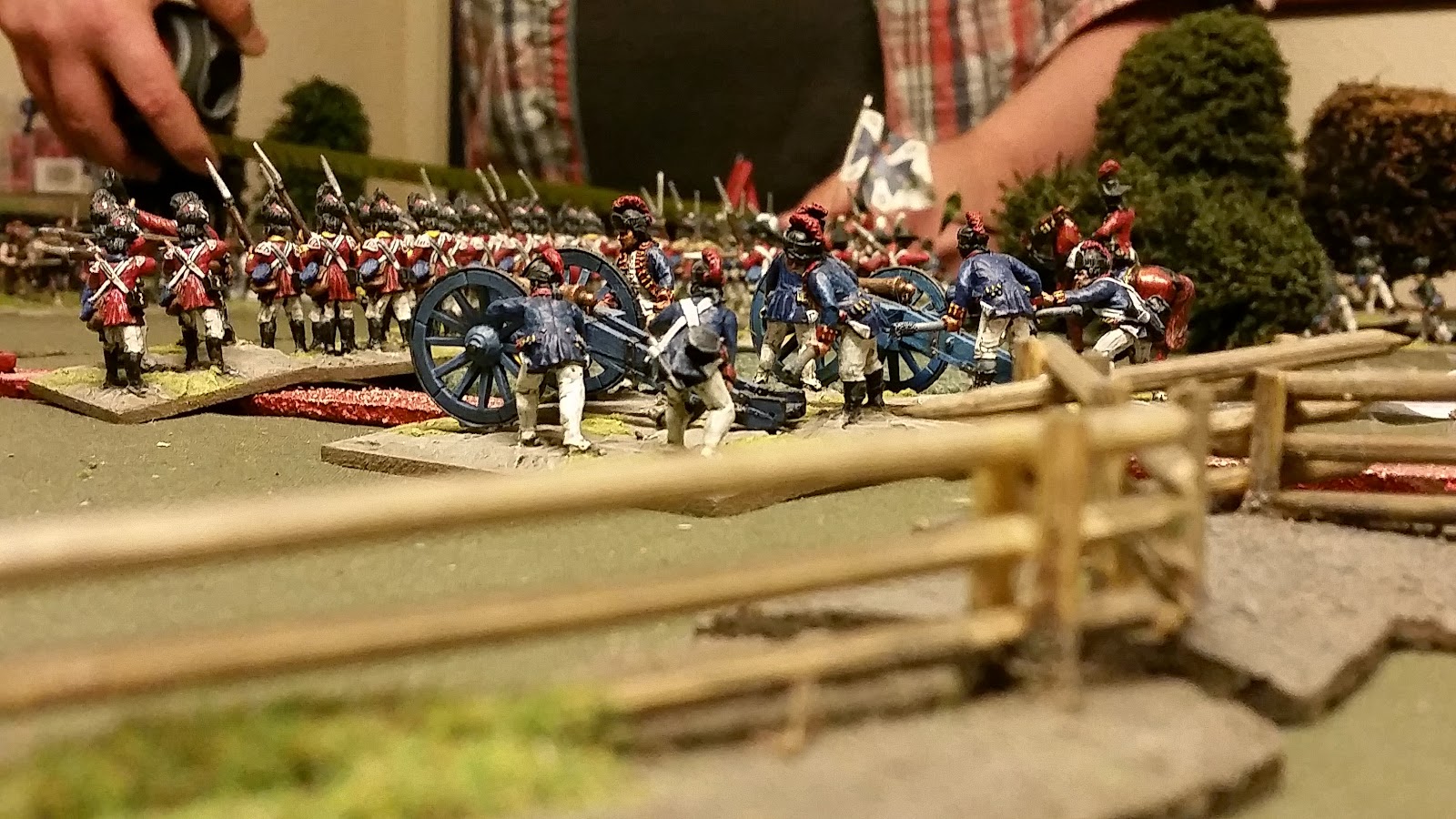 A pause in the action as the British reform and rally off dps prior to attacking the second line. 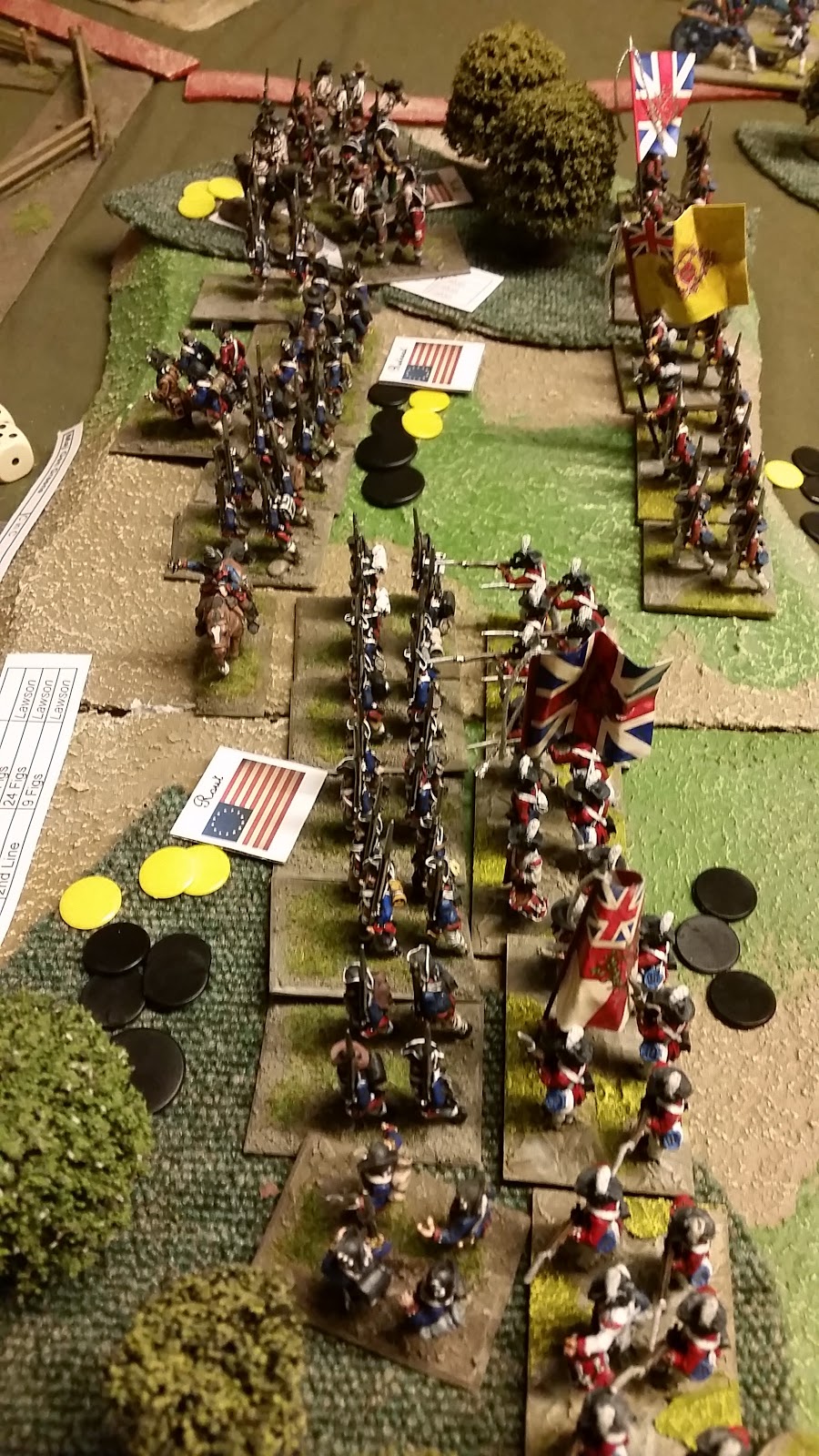 There was a definite lack of subtlety with the attack on the second line, a quick soften up with the artillery, a volley and a bayonet charge and the job was done. 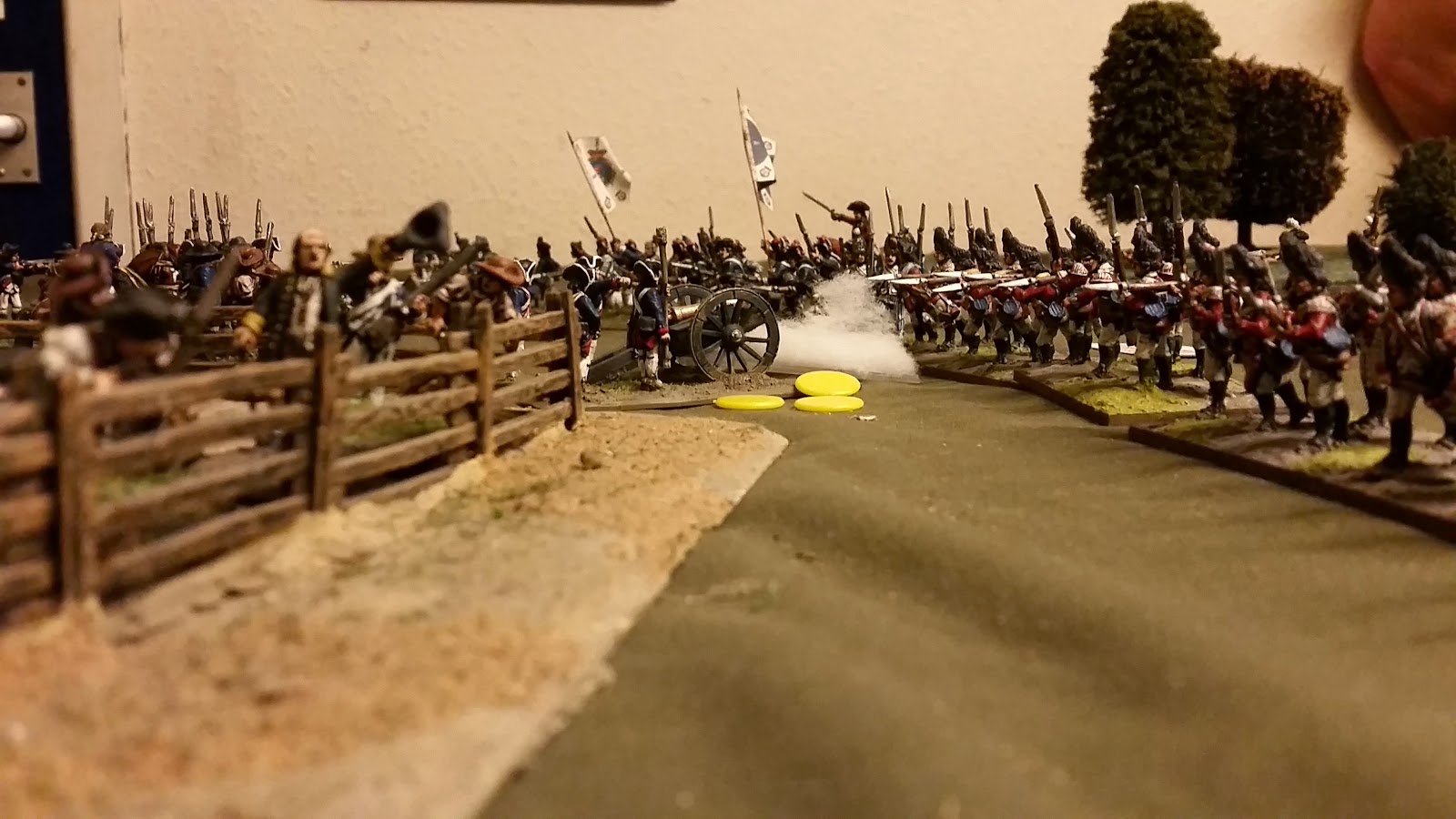 Not much different on the right, charging Guards Battalions sweep all before them, finally silencing the 6pdr gun which had devestated the Highlanders. 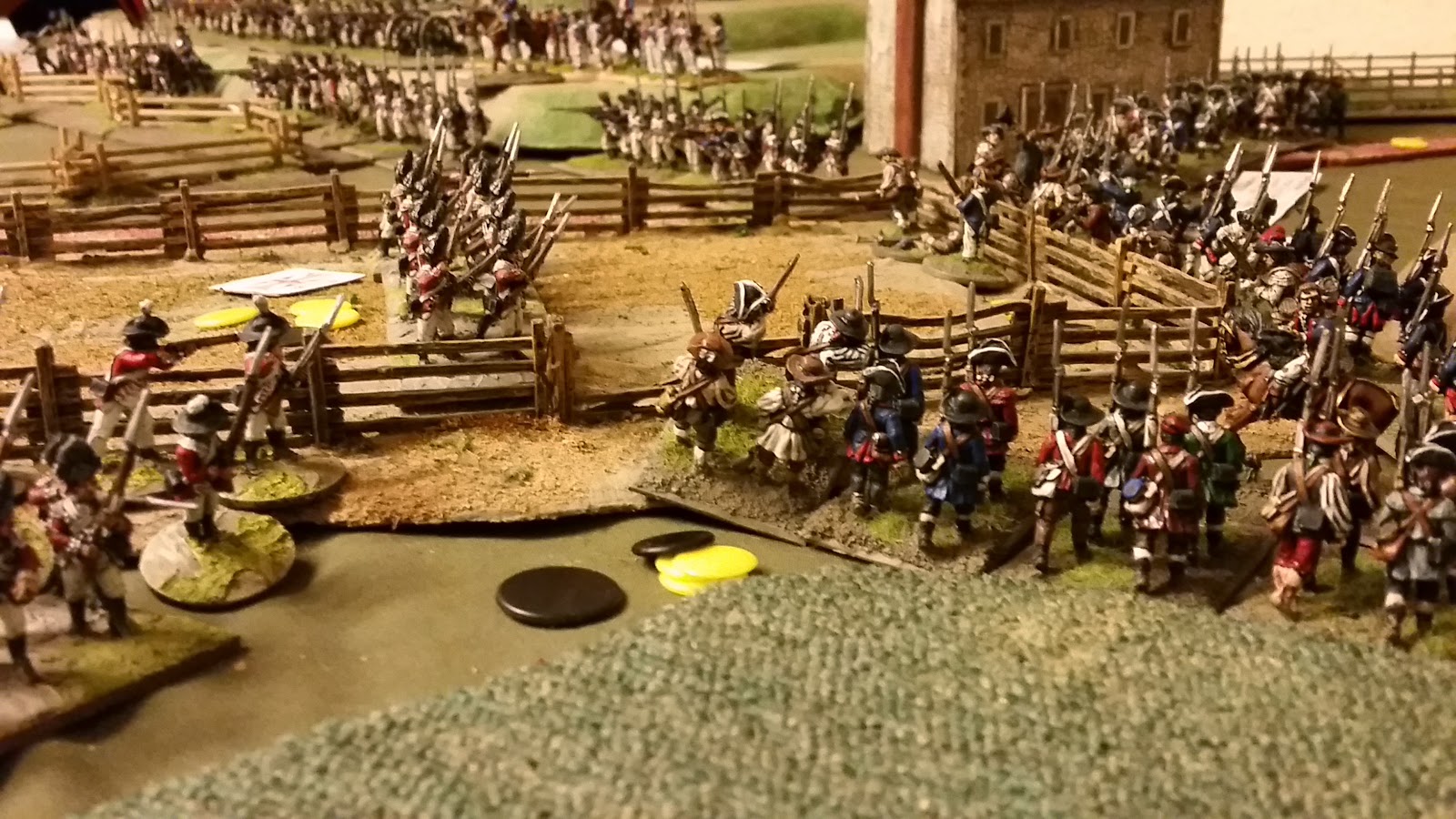 The Courthouse comes into view as the Americans shorten their lines for a final stand. 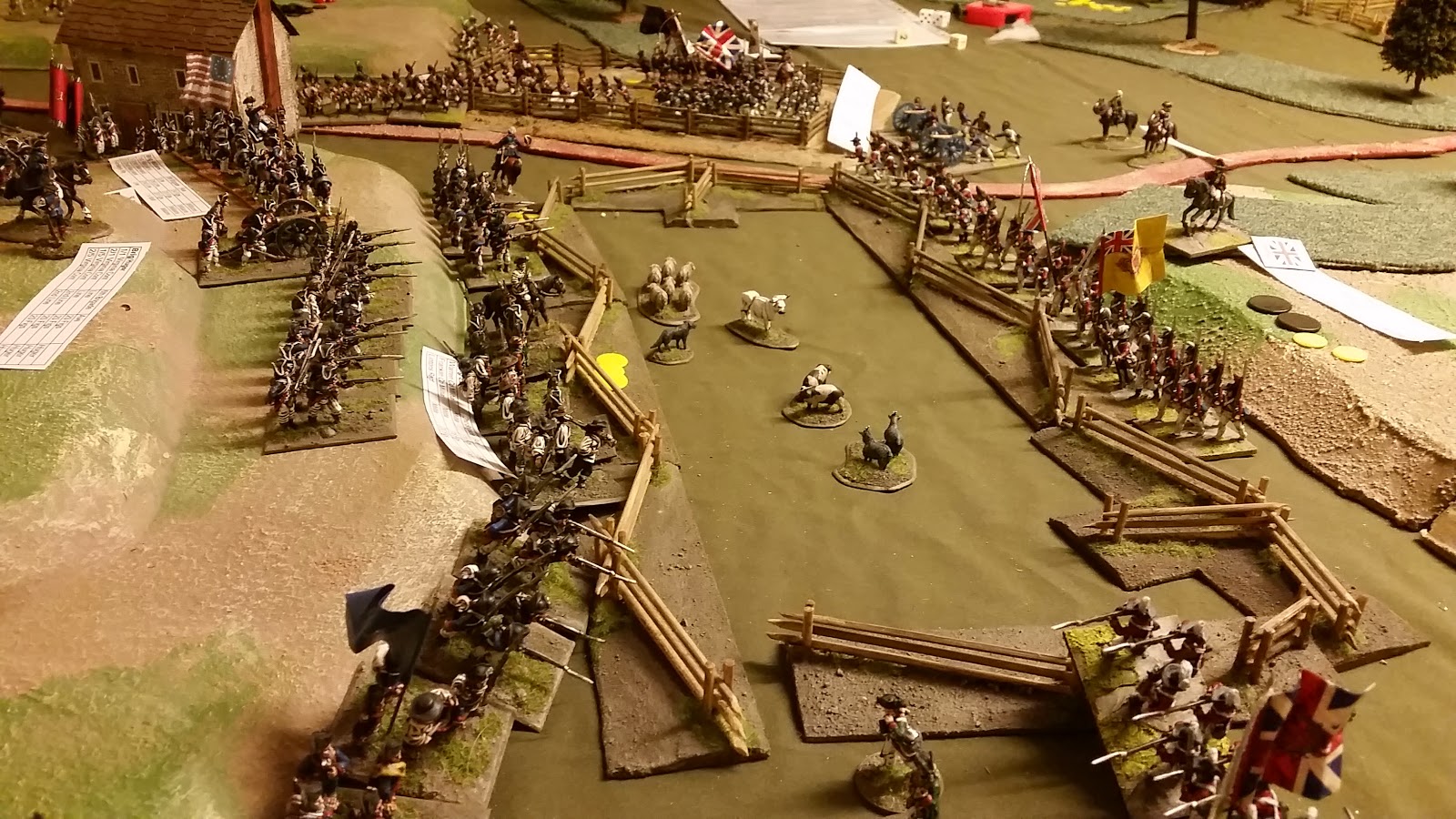 An overview of the end game, the last hurrah of the Americans begins as two Maryland units advance off the hill under direct orders from Greene to charge the 33rd who had become isolated on the British left, in the background you can see the hordes massing for a final attack on that side. The Americans had fortified the Courthouse and were waiting. 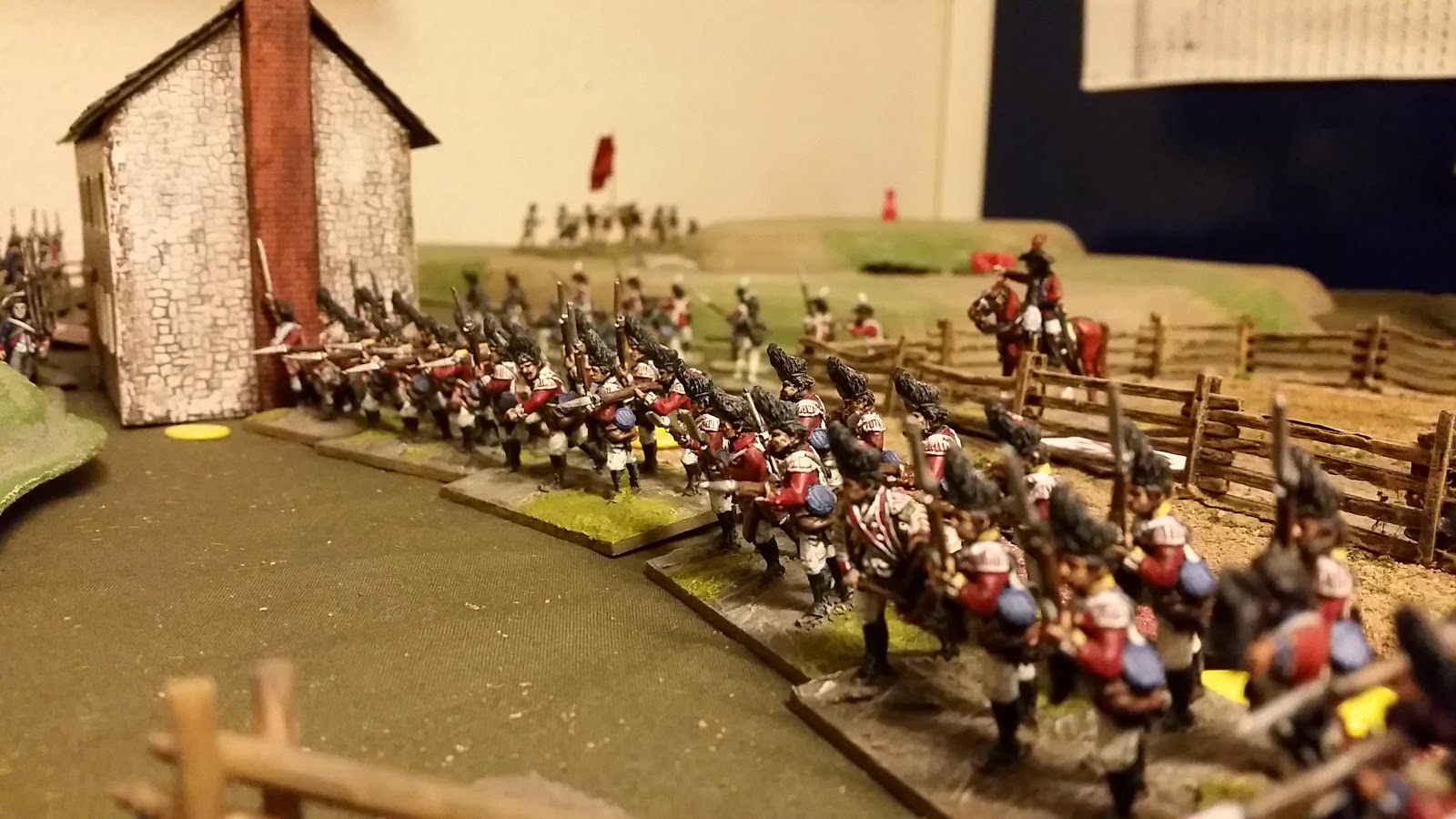 The Guards units run out of steam, Elite units are so hard to stop in British Grenadier but these boys had come a long way and only started 16 strong, withering fire from the hill and sniping on the flank from the courthouse were starting to cause casualties. I have used my combined Grenadier units for the Guards, I was tempted to call them Grenadier Guards and sit back and watch the carnage on TMP, but didn't have the heart. Must get more figures and cavalry and Highlanders in trews. 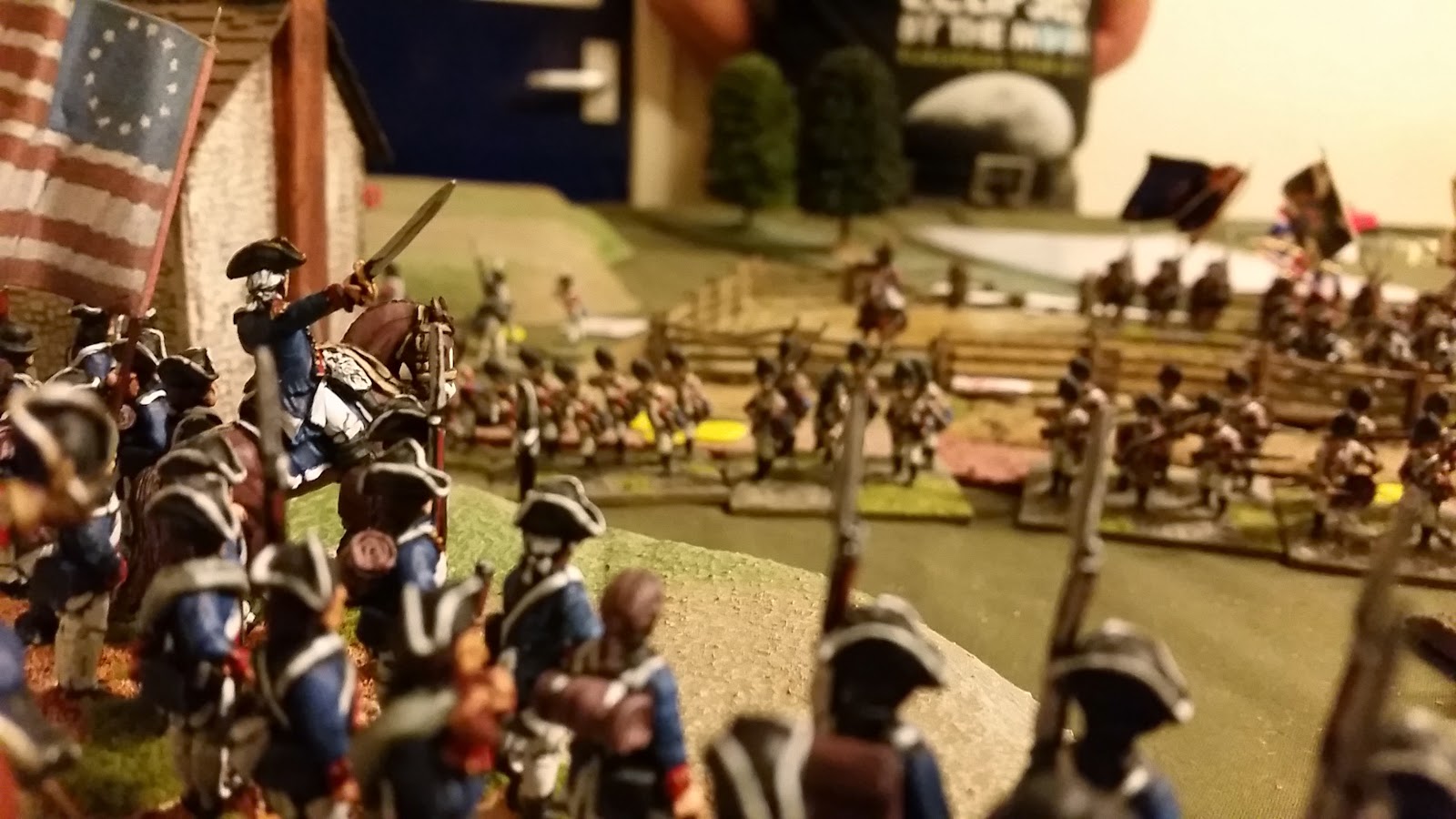 My favourite photo of the day, the end of the game and the Americans hold on to the final hill, the American commander saluting the foe.

We decided on the night on a draw but looking at the scenario is was closer to an American victory, the decisive move being the American charge on the British left.

Win, Lose or Draw we all really enjoyed this game and that's what its all about, what gamer doesn't want to play games like this with good mates and nice figures. I can certainly see us doing this again when I've got some cavalry. Its a close run thing for both sides and a game both can win.

Next up on the table we will be our traditional Christmas game, off to the Middle East for a spot of WW1, gunboats and camels ahead.