When it came to set up the next game for our little bunch of tabletop warriors once again work life and the real world limited my prep time, so I needed something quick to set up, which required little research or preparation.

The AWI rules are fairly fresh in my mind after the big game earlier in the year and the figs always look nice on the table so period was quite easy, however which game to go for ? Historical Scenario or made up game action ?

A quick flick through my background material and Guilford Court House jumped out of the pages. Its a classic action of the period, high quality British troops battling their way through increasingly difficult lines of defence. Added to that the fact that I had never tried the battle (I'm quite new to AWI). I also have a personal motive, regular followers will know my painting project for the year is a 28mm brigade of Brits, which I am close to finishing, what better than a good old game of British Grenadier to get the Vallejo juices flowing.

Cornwallis, the British Commander set his army off across North Carolina hot on the tail of Nathaniel Greene and his men, Cornwallis was after a quick victory , he could ill afford Greene gathering more forces which were already preparing in Virginia, a decisive action in the early part of 1781 was delayed by Greene for this reason.

After receiving some more troops Greene, after a couple of days of manoeuvre around the surrounding area set up his army in a strong defensive position of three successive lines, outnumbering the British by about 2 to 1, Cornwallis could have turned away, he didn't and took on the Americans.

The set up we used is shown above (still haven't got the hang of a map app). The Brits move on table and advance towards the first line of Americans who are set up behind a fence line, the second line are set up behind a central line of woods with the left flank ( as viewed above ) on a hill. The final line can be seen in the distance set up on the last hill with the court house to its right.

For rules purposes (British Grenadier) we determined that crossing the fences would add 1DP and the woods 1DP per dice movement. 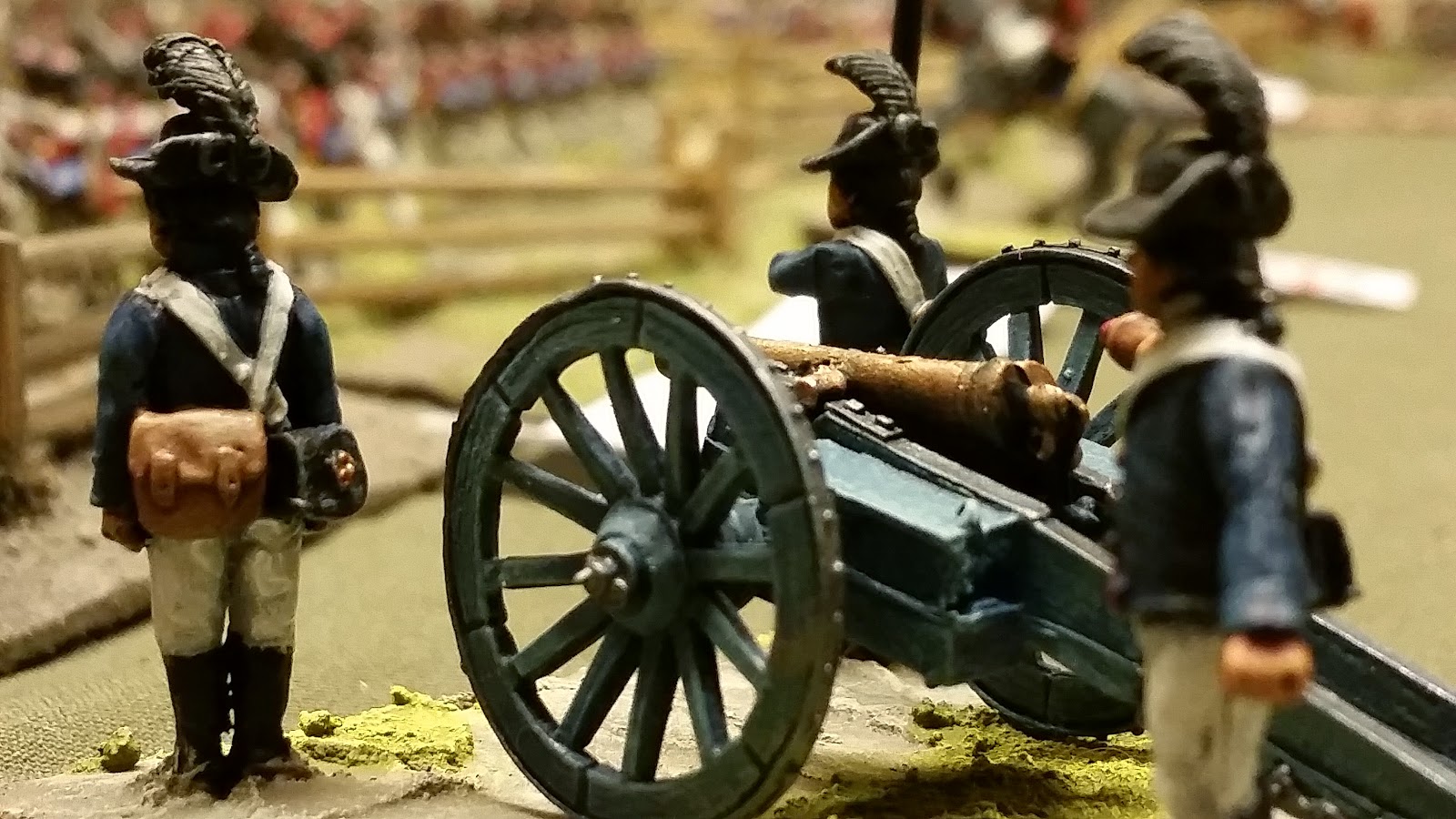 A quick note before our orbat. I have listed the troops we have used, the orbat for the game is readily available but very rarely will you find two the same. Our orbat is as close to the day as we could get. The main limiting factors being 1) I don't have any AWI Cavalry finished as yet 2) All our close order stuff is based in 4s therefore unit sizes have to be 12, 16, 20, 24 etc 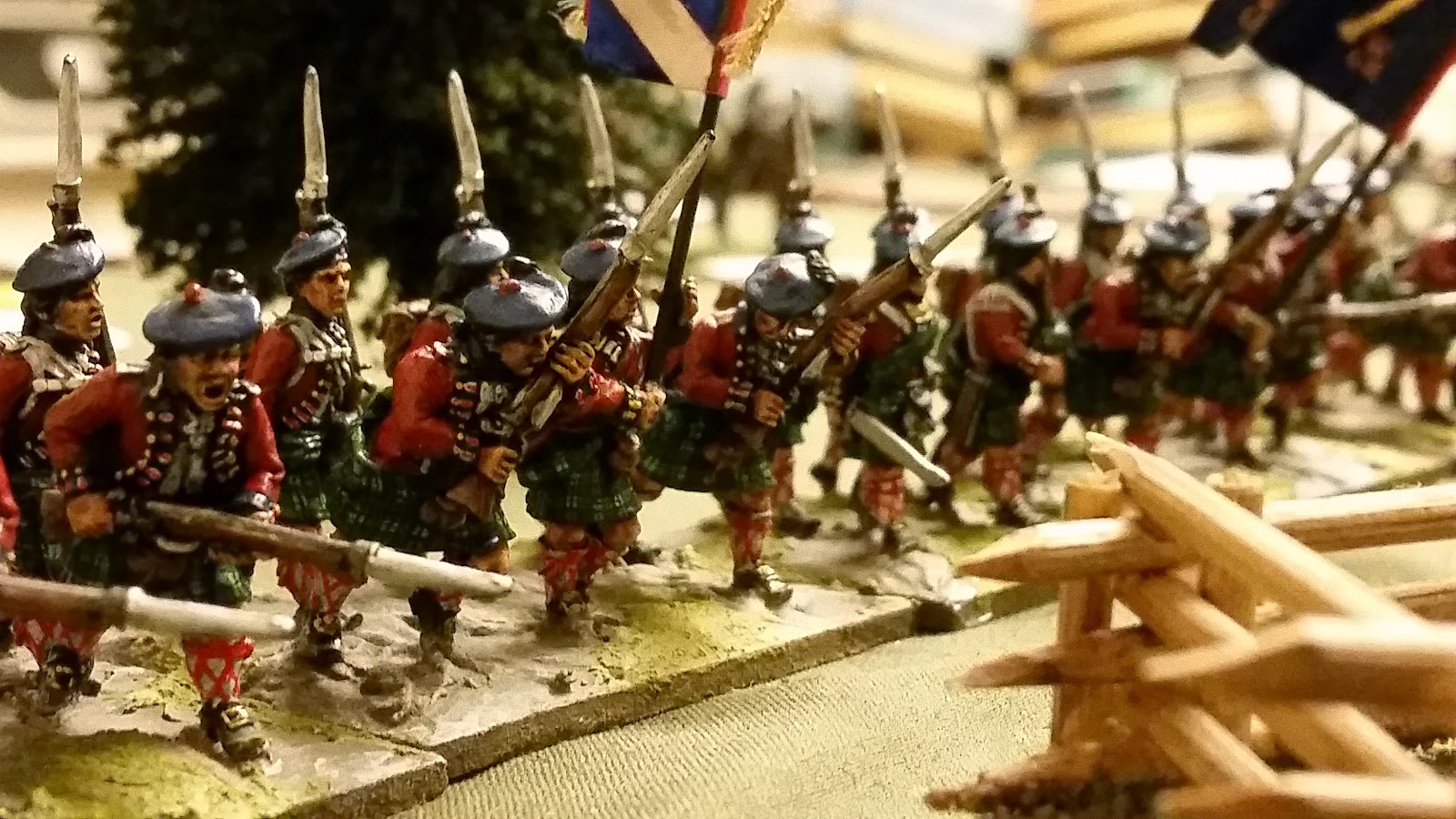 Set up with Webster on the left, Leslie on the right with O Hara bringing up the rear. 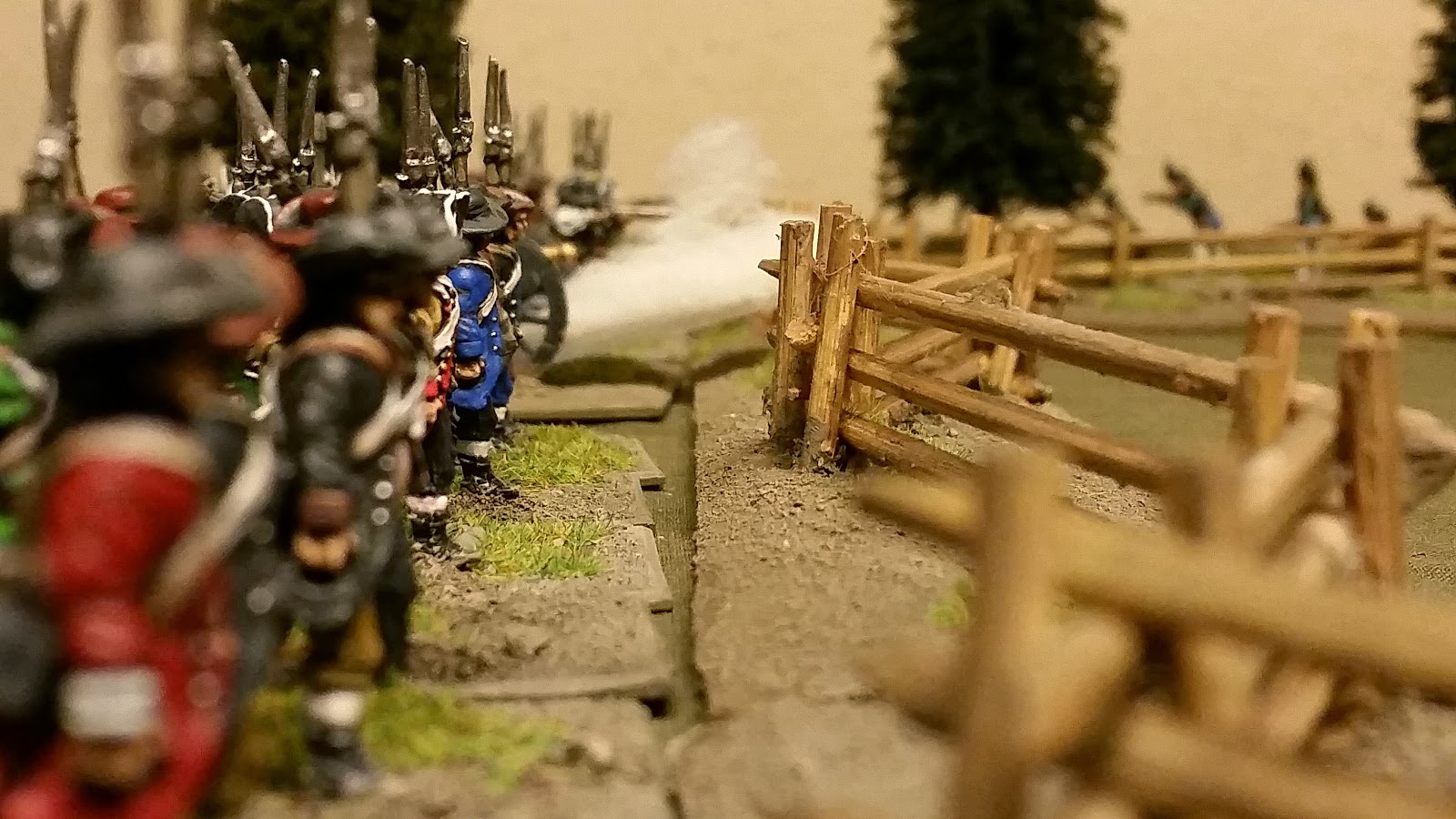 Again with the American figs we had no cavalry available. 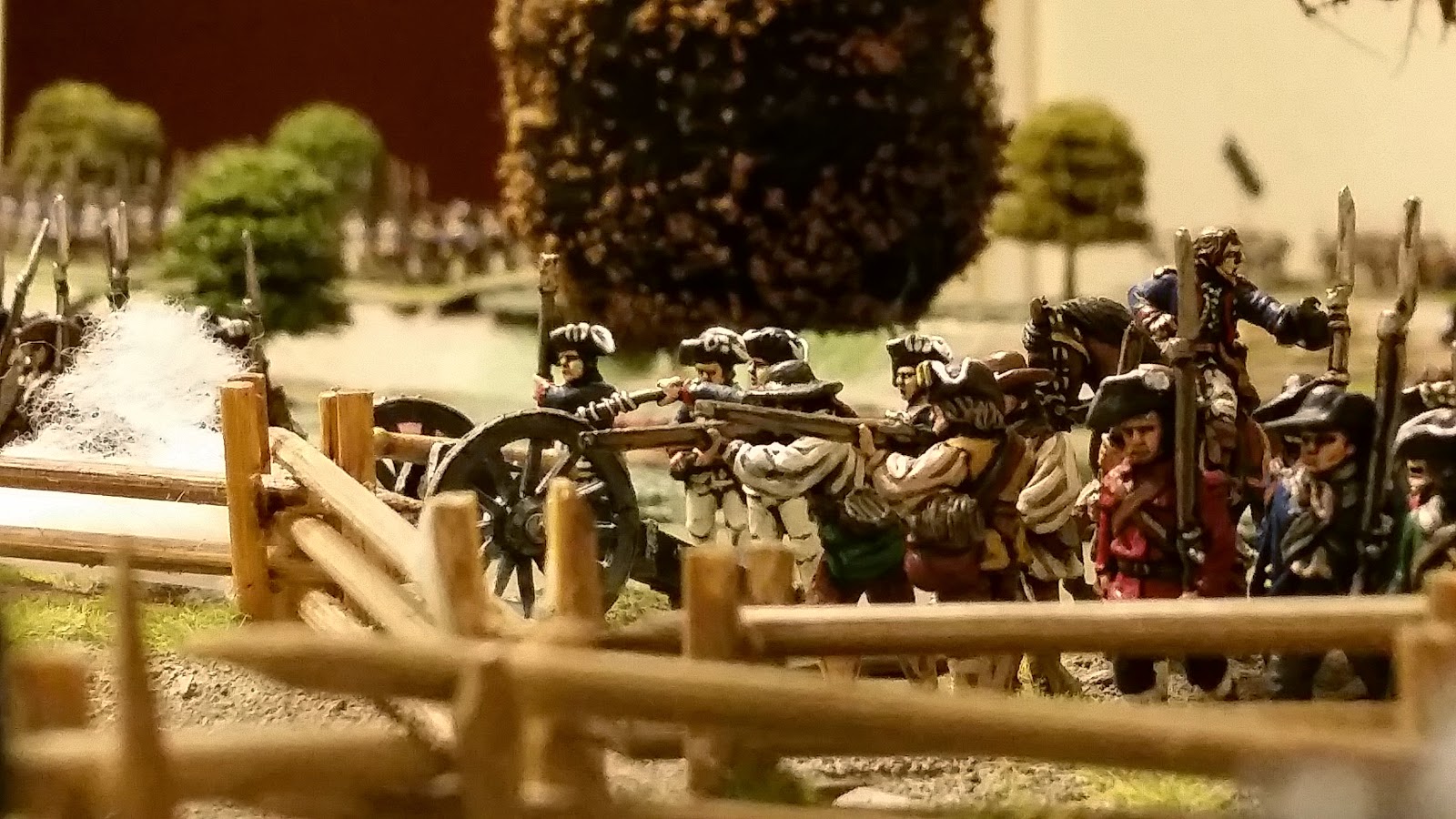 This is the second line with Lawson on the left (as viewed) on the hill and Stephens behind the woods on the right. 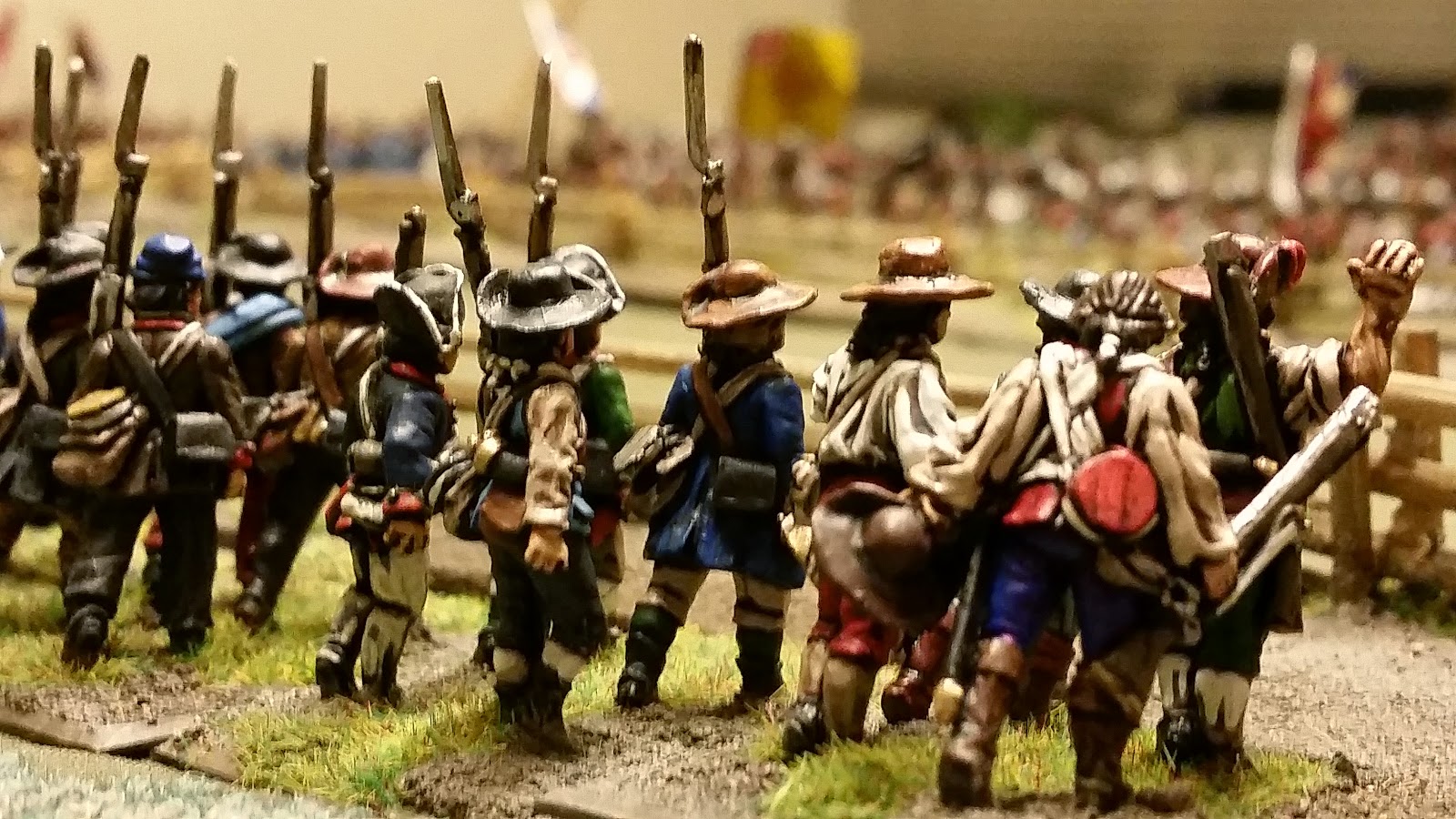 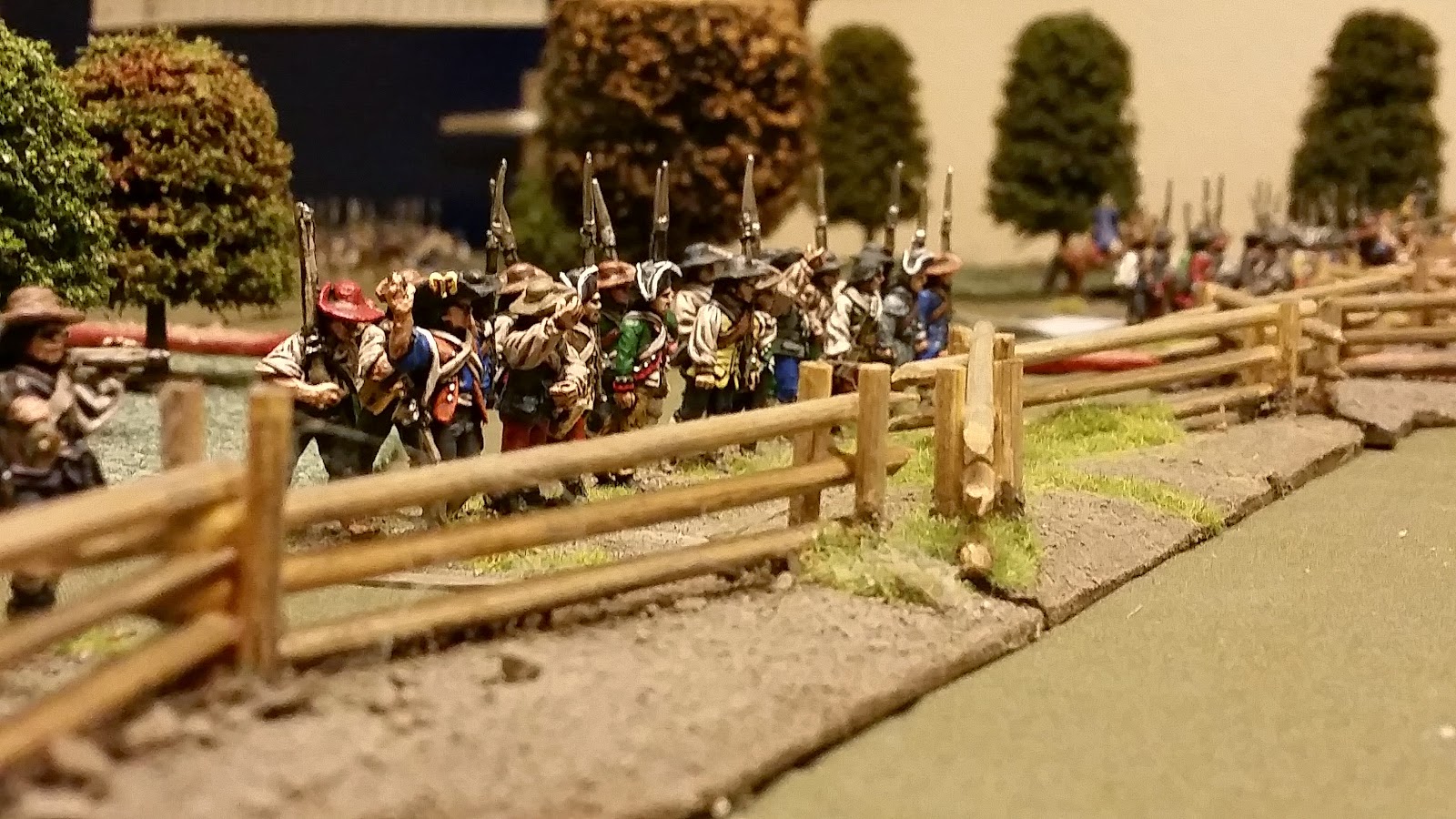 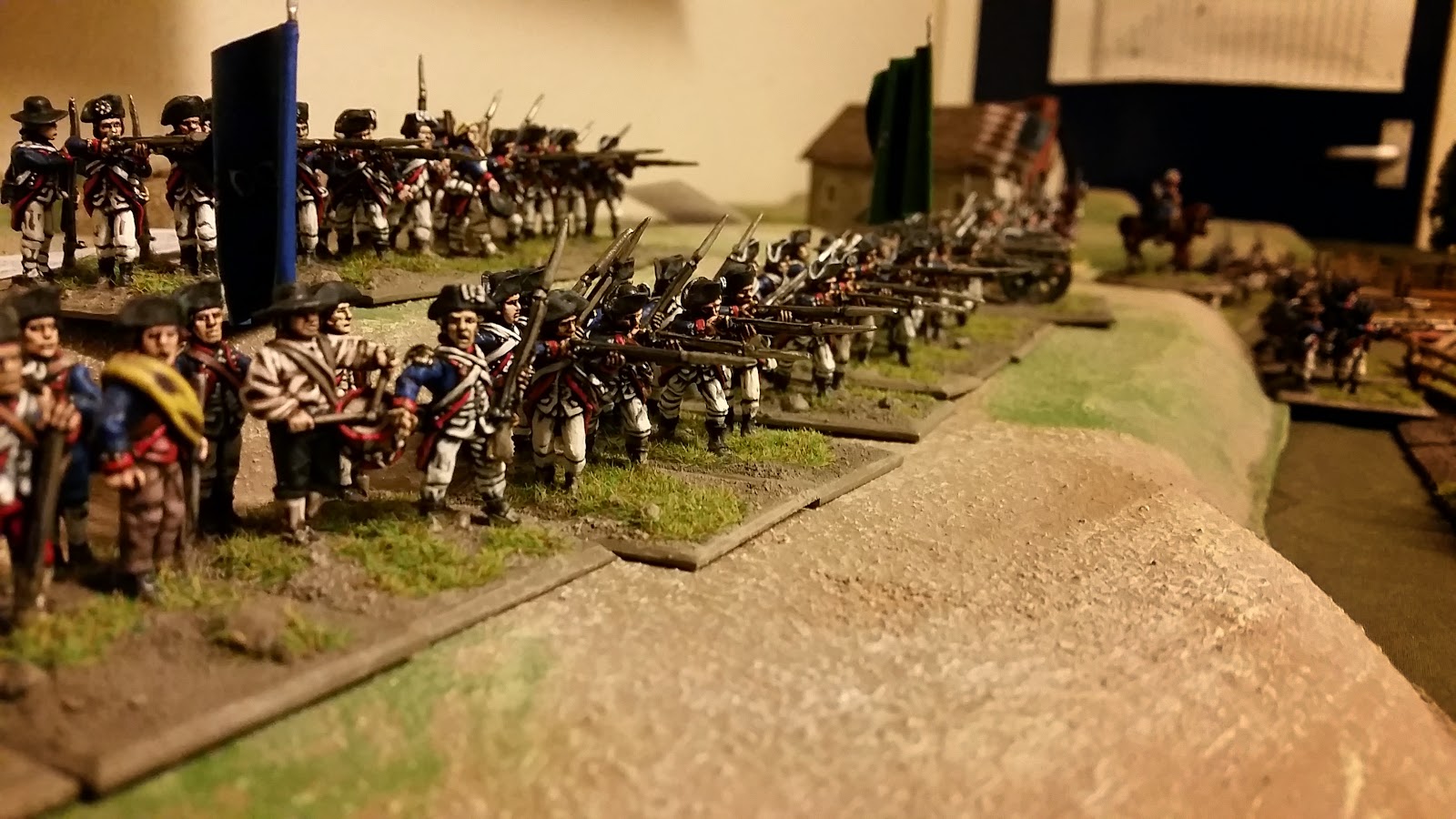 The good stuff underneath the crusty top ! The Continental Regts set up on the final hill, the Maryland troops around the court house and the Virginias closest to the camera.

The Brits objective is to beat all three lines of defence whilst the Americans are looking to hold the Brits at their third line. I'll post an AAR when we get the game finished.

Thanks for reading my version of this classic game, looks like I'm buying some Cavalry in the new year.