The End of the Line for the Great Tripoli Dash


Welcome back Naval Gamers to the fourth and final part of our journey, if you are new to this set of linked scenarios then you can catch up with the first post HERE.

Once again I have repeated some of the information below from previous posts to help any newcomers to the games.

We are following the adventures of an Italian Convoy en route from Naples to re supply the Italian and German Armies prior to a major assault on Torbruk. Our first encounter saw the Royal Navy scamper away with a self inflicted bloody nose, the second was slightly more even,whilst the third saw the stakes increased with the arrival of the first Capital Ships, now our final action brings together the opposing fleets in a battle of the big guns.

This is a linked scenario from the previous games so if you are following this the damage / lost ships maybe different so the following is only general guidance. Any sunk ship is lost. Any ship with damage I will remove half the recorded damage from the previous game so that it will start the next scenario with a reduced damage value, I do the same with lost speed. Any knocked out features like turrets / torpedoes etc I roll a d6 with a 50:50 chance that the feature was not as badly damaged as first thought and is available for this game. Once this is done you need to make a common sense decision on whether or not a ship would stay at sea, in our first game the Italian destroyer Libbecco had suffered a Fuel Fire and a Rudder hit at the end of the game and was below half damage points, its obvious that she would have sailed for the nearest friendly port. 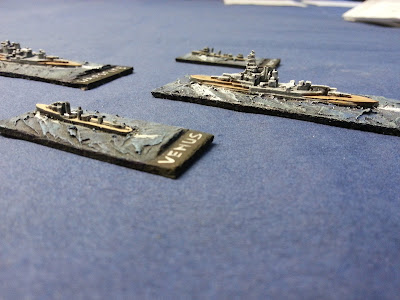 The actions over recent hours have led us to this moment, the planning from the Admiralty has brought together the biggest guns in the Med under your command, use them well. Your mission remains, stop the Italian Convoy from reaching the Libyan coast and Rommel. This will be your last opportunity to prevent these supplies reaching the DAK so make it count. Intel reports suggest a large Italian escort on this final leg of the journey, a force containing a number of Battleships, it may not be easy but England Expects. 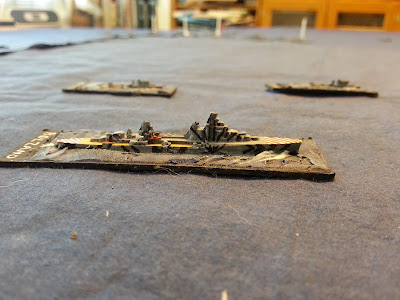 We are nearly there, the coast of Libya and the Port of Tripoli are close and this is the final leg of the journey, the Head of the Italian Navy has sent you the most powerful force the nation can muster to force the convoy home. Recon aircraft have spotted the smoke of the main Royal Naval Battle Fleet steaming to intercept you from Alexandria, an epic battle awaits. 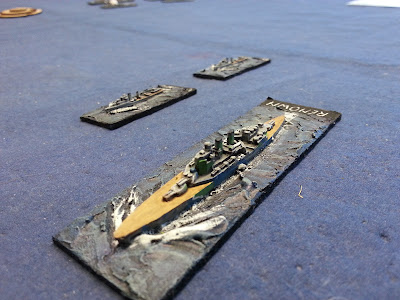 Set Up (This includes our losses from Game 1,2 and 3 if following along use your losses)

Force K and Force B deployed as a single screening force. 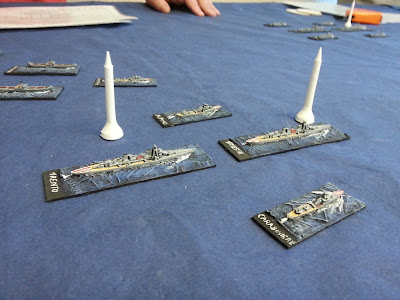 We fought the battle on our regular 12 ft by 6ft table, RN screening force and Convoy Acca both sailing in the same direction (along the 12ft length) just out of range of each other. 1ft in from the short table edge.

Force A1 and Heavy Division Duilio set up 3d6 inches in front of the above sailing in the same direction 6" in from the table edge.

We ended up with the two main forces heading towards the ships from the previous games broadside on to each other. 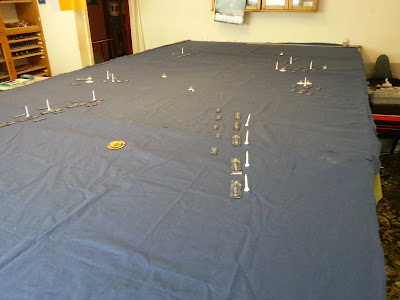 This is the last game of the series and we allocated a full days gaming to it.


Air Power should be allocated at random, we have a separate air phase in our game turn and during that part of the turn each side rolls a d20 with the following results. Each flight is 6 planes.

The big finale didn't disappoint, there were a lot of factors coming together in the final game and with 60 ships on the table there was a lot to be going at. Luckily most of us have a grasp of the rules so with everyone able to work out their own gunnery etc we could keep things moving at a relatively quick speed.

The game started badly for HMS Coventry who lost a turret on the first turn but even worse for Fiume who was unlucky with the set up, at that location the British had a spare Battleship and rather than doubling up Warspite decided to pick on Fiume. Cruisers and 15" shells don't mix even when the Cruiser is a heavy one.

All over the table the dice gods were laughing as player after player failed to convert half hits into damage whilst over the table the British Fighters were gaining air superiority over their less able Italian counterparts.
The first serious damage however was to Renown, continuing her long range duel with Caio Dulio from the previous game, the Italian ship managed a hit, at long range Renowns armour would protect her in most areas however luck or fine shooting put an Italian shell into the Battlecruisers funnel a random roll meant she lost 10 knots of speed. Moving quickly was no longer going to be extra armour for her and Renown was to keep her distance for the rest of the game.

In the same turn the Italians lost the destroyer Nembo who withdrew after a bridge hit but it was the Italians who had the edge.

The previous turn however seemed to activate a table wide funnel magnet and the British Battleships managed to hit the funnel on both the older Italian Battleships slowing them down to 20 knots and 18 knots, Renown had the luxury of turning away but the Italian ships needed to stay in line to keep the pressure on the British.

Fiume on the other hand never had a chance and relentless hits from Warspite sent her to the bottom of the sea, a hit on her rear turret led to a chain of explosions putting all her turrets out of action, she turned away with less than 5% of her damage points left and fell apart on the open sea.

The next turn saw a major Italian Air attack, 2 flights of Bombers and 2 of Torpedo Bombers, escorted by 2 flights of fighters. But readers of the series will know, Italian air support is not always a blessing.

With a 30% chance of attacking their own ships the Italians excelled with their die rolls and only two flights attacked British ships, against the odds and frustrating for the Italians, hilarious for the British. Even more fun were the attacks, the one the Italians wanted to work, on the already damaged HMS Renown managed to get through the heavy AA fire and launch torpedoes, a slim chance but its a HIT !, roll for damage, .................. its a DUD, again. Cue Italian heads hitting tables.

Clearly unhappy with the Italians the dice gods had not finished, there was still the Italian attack on there own ships to work out, the Light Cruiser Garibaldi was the target. The Italians roll the dice, its their planes attacking their ships. 500lb bomb straight through the roof of B turret, no dud this time ! 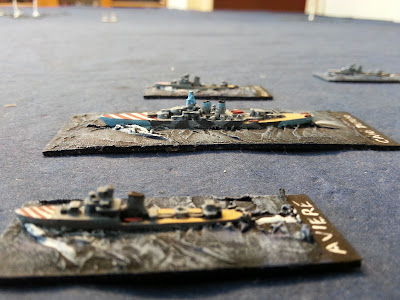 The Battleship fight was well underway at this point and the Italians had the upper hand, HMS Valiant lost her B Turret to Littorio, the modern Italian ship, the best on the table was showing her class. Cavour on the other hand managed to hit Barham 5 times in one round but only got one; relatively ineffective; penetrating hit.

But the next turn the advantage swung back to the British with a turn we dubbed "The Death Ride of the Italian Destroyers". Both sides simultaneously swung their destroyer escorts out towards the opposing battle lines in an attempt to get into a position to make a torpedo attack, squared off against each other at short range it was always going to be bloody.

It was, Borea and Zeffiro sank quickly from accumulated damage points whilst Baleno blew up following a turret hit, the explosion from that ship set fire to Folgore and Lampo the two remaining Italian Destroyers in that squadron, to make things worse the debris from Baleno took out Lampos bridge and in one turn 5 destroyers were gone or as good as gone. 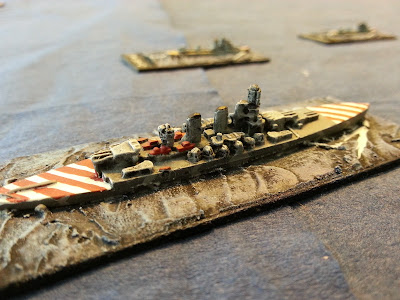 The game changer happened in the next turn, Littorio was still the best ship on the table and able on her own to cause havoc but she was hit again and this time the British shells took out her Fire Control Systems, its a rare hit but a serious one. All further hits made by her would be halved; the Italians were in trouble.

With their best ship no longer a threat and two of the remaining Battleships below 20 knots the Italians decided to withdraw and abandon the convoy, slipping away whilst the British converged on the convoy the Italian Fleet lived to fight another day. The convoy ships were scuttled and Rommel would have to wait for his vital supplies.

So in the end a British Victory. In our final game the British lost only 2 destroyers (Vixen and Vendetta) sunk however Renown was down to 20kts and the Cruisers Norfolk, Ajax and Coventry had all lost turrets. The Battleships hadn't come out of the action unscathed either, all had some form of damage. Warspite had only been hit once but had lost two turrets, whilst Valiant had lost a turret and half her damage points.

The Italians lost 5 destroyers and a heavy cruiser sunk with a further destroyer withdrawn. Its battle line was similarly damaged. Littorio had suffered as described above whilst the Cesare and Cavour had both lost close to half their damage points. Added to that the Cruisers Garibaldi and Trieste were badly damaged. 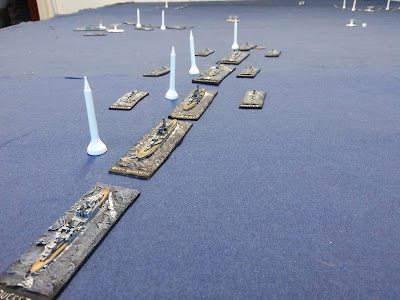 Thoughts on the Campaign

Firstly as mentioned in previous posts thanks for all the interest in the Campaign, previously hits on my Naval pages have been quite low compared with other topics on the blog, this set of posts have turned that around with all three posts being in the top 10 of all time reads, so thank you.

This is the second of these linked scenario campaigns I have done and I have to say for me its the way forward. I have tried the all encompassing campaign, plotting individual search patterns etc and they are hard to run and even harder to keep people interested in.

There were moments in the games where the course of the campaign could have swung either way and I would be interested to see how other people got on if they tried the games with their rules. If the Italians had armed their torpedoes and attacked the right ships how different it could have been.

That will be it for a while for WW2 Naval, time to get back on the land for a while. I would think that most of my Naval gaming for the rest of the year will be in the development of the WW1 rules which will be on the blog one day.

I will no doubt do another Campaign next Easter, I haven't thought of an idea yet so any suggestions from the readers of Yarkshire Gamer ?. Let me know what you would like and I will write the scenarios for you, cant say fairer than that.
Posted by Yarkshire Gamer at 21:31:00