Panzers In Normandy : Then and Now : and Now

Two weeks off the blog and the books above are responsible, that and the 14th Century WiFi in the cottage I was in on my holidays in, you guessed it, Normandy.

Now I have to say that I am quite lucky in that Mrs Yarkshire and Baby Yarkshire both don't mind a bit of history and Baby Y (aged 15) likes anything involving either Tanks or Bunkers so a good time was had by all.

Both books should be quite well known in the circles who read this blog and both now quite old. The Panzers in Normandy book was something I longed for as a teenager in the mid 1980s and I remember saving up especially to buy it for the then massive sum of £20. It was a originally written in 1979 but the After the Battle Magazine added some photos in 1983. It gives a good history of the vehicles and units that operated in Normandy but its USP was its use of modern (1979) photographs taken at the same locations as ones taken in WW2, for some reason I found that fascinating and using the book and finding some of the locations in 2015 was very satisfying.

The Holts have produced a series of Battlefield Guides over the years and I have used them for the WW1 battlefields and found them excellent. I have had the Normandy book for 15 years or so, written in 1999 it has dated quite well. For those unfamiliar with the Holts work; they split the battlefields into a number of tours and give you driving directions to various locations. Added to that are various individual accounts from the action at that location which really bring things to life. You get all the normal touristy stuff but you also get some out of the way memorials, like the Danish one above, sites which without the books probably wouldn't get a visit. So here some boring holiday pics wrapped up in a book review for some books which are between 25 and 35 years old, topical !

Utah Beach and the US Para Drops 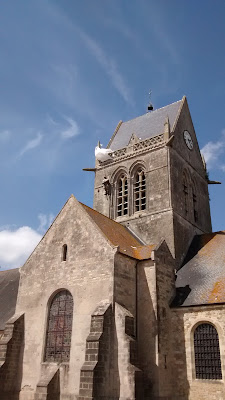 The day starts in St Mere Eglise, lots to see and the US Airborne Museum opposite the church is well worth a visit. 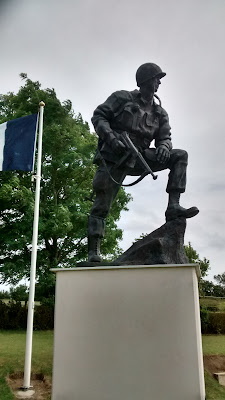 The "Iron Mike" statue at La Fiere, the Holts book has some great stories at this location which really brings the scene to life. 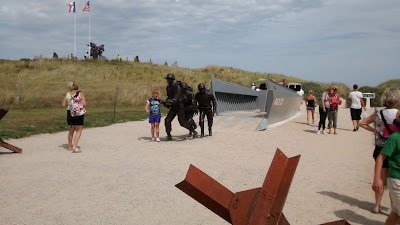 We spent two days to cover the first tour, taking things easy, Utah Beach being away from the other 4 beaches was less of a tourist trap and was the only beach we spent any time at, the museum at the beach is worth a visit even with the M4E8 outside. 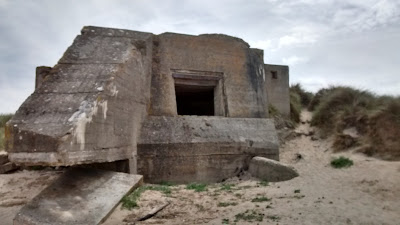 Further down the beach near the French memorial is a group of bunkers (cue Baby YG smile) free to access and roam, found thanks to the Holts. 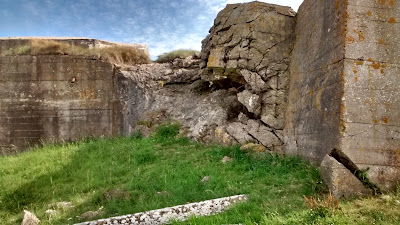 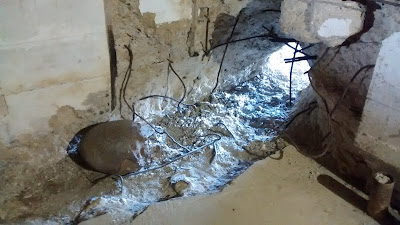 Last stop for us on the day was the Battery at Azeville an interesting tour leading you underground through the tunnels to the various bunkers (Baby YG heaven). The Battery entered a gunnery duel with USS Nevada and her 14" guns, the aftermath of which is shown above. 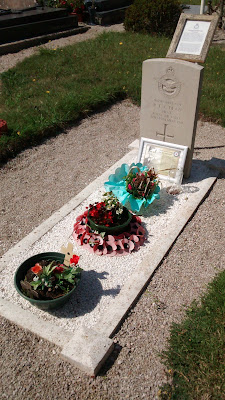 The day started really well with a visit to a tiny church in a village called Brevands, there is a D Day stained glass here but the moving thing for me was the grave of a RAF Spitfire pilot who was killed over the area in 1941, it was really well maintained and contained detailed accounts of the young mans final action. 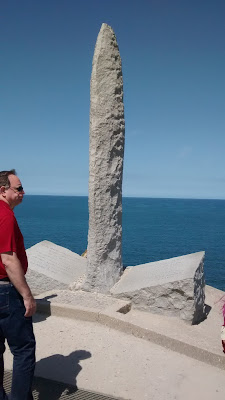 The famous Pointe du Hoc site is well maintained by the US Government and was very busy but informative and well worth a visit as is the main American Cemetery. 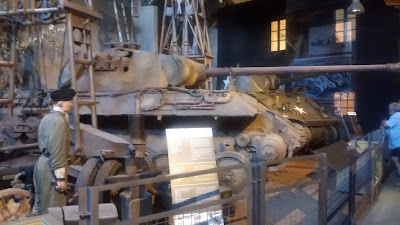 One of the highlights though is the visit to the Overlord Museum which is opposite the Cemetery, only recently opened there are some great exhibits here. I have seen some complaints about entry cost 7.5 euros which is 2.5 euros more than most other museums but I don't think its overpriced. This is the only place in Normandy you will see a Panther Tank and they have an unsurpassed (for the area) collection of German equipment. All the exhibits are set out as dioramas and well presented, lighting is subdued but I would suggest this is to protect the exhibits.

I gave up with Omaha Beach itself, it was absolutely packed with holiday makers on the beach, probably just me but I wouldn't want out of respect to swim there. We drove along the beach and back out. One day I will go back out of season.

Anyone with an interest in WW2 and its battles will know of "The Black Baron" I recall reading the section in the Panzers in Normandy (PIN) book and our day out on the Tiger trail for me was the highlight of the holiday. 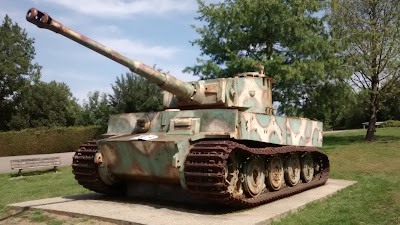 First up was a long drive to Vimoutiers a small town to the east of Falaise where a lot of German armour was abandoned in the final days of the Normandy Campaign. In a lay by out side the town is a Tiger Tank ! This to me is amazing there are only 6 of these left in the world and here is one I can climb on, left at the side of the road. The PIN book gives a full account of the Tank and its recovery with some great contemporary photos.

A cross country drive brought us to Villers Bocage the scene of Wittmanns most famous action, much changed from 1944 we still managed to follow the action through the streets and using the photos in the PIN book located many of the locations. 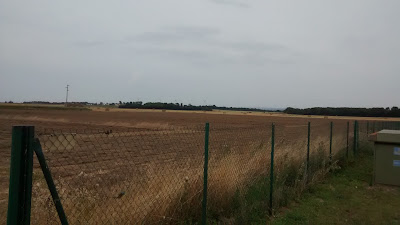 A short drive then to Gaumesnil the scene of The Black Barons final action, again described in detail in PIN, we were able to locate the location of his tank and the action that day. There are no markers or monuments. A note if you do visit the area Gaumesnil village is now cut in half by the N158 which is a dual carriageway and not crossable by foot and I wouldn't recommend parking on it either.

If you travel into the village from the south (it is a tiny place) turn right in what looks like a farm yard down a dead end track which will bring you to the now closed junction with the N158, on your left is the location of a now destroyed chateau which was destroyed in a fire caused by drunken British soldiers (no change there then !) the wall to your front right bordering the road (behind the post war house) was there on the day and was used by the British tanks which are likely to have killed Wittmann as cover, look closely you might see some repaired Sherman sized holes.

You will then need to cross the N158 and join the minor road which runs along the eastern side of the main road. Witmanns tank 007 was destroyed in the field to the north of the Farm Machinery Garage as shown above 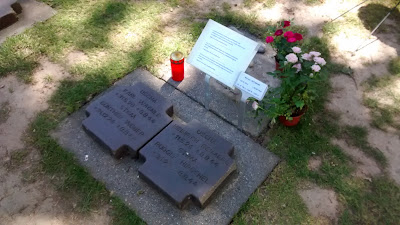 Final visit of the day was to La Cambe the German War Cemetery and Witmanns final resting place, he was buried with his crew at the side of the road next to his tank for many years until his remains were located in 1983 and moved with his crew to La Cambe.

Unbelievably someone had stolen Wittmans headstone, there are some sick people in this world. The cemetery is well worth a visit very respectful.

The British and Canadian Beaches

We spent two days following the tours of Gold, Juno and Sword beaches, the Museum at Bayeux covers the Campaign following the landings as is another worthy of a visit. From there you can leave your car and walk to the British and Commonwealth Cemetery just over the road. 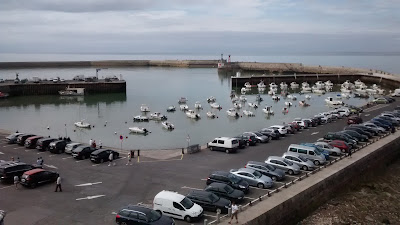 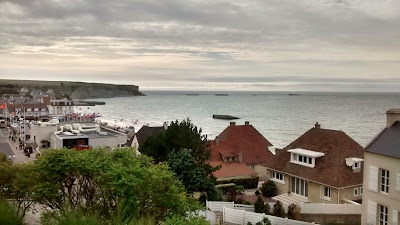 Arromanche was packed as well on the day we visited, with a live band playing rock music in the harbour and a fairground it was hard to picture the action on the 6th June 1944. The 360 Cinema is worth a visit only 20 minutes long but very well done. The main focus of the Canadian beach is at Courseulles sur Mer with an excellent museum (I forgot my camera that day !). I had visited all the British Airborne sites a few years ago and these are covered by the Holts in great detail.

So a great holiday guided by two great books, if you are interested in WW2 Normandy is a must once in a lifetime. The Holts Arnhem Guide is on the way from Amazon, anyone know any good holiday cottages in Holland ?
Posted by Yarkshire Gamer at 09:50:00

Email ThisBlogThis!Share to TwitterShare to FacebookShare to Pinterest
Labels: The 3 R's