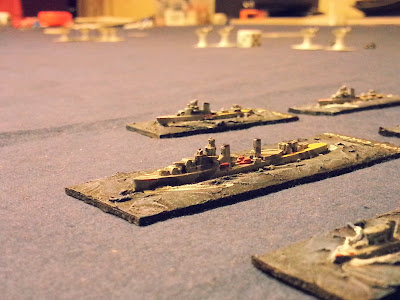 Welcome back Naval Gamers to the second part of our journey, if you are new to this set of linked scenarios then you can catch up with the first post HERE.

We are following the adventures of an Italian Convoy en route from Naples to re supply the Italian and German Armies prior to a major assault on Torbruk. Our first encounter saw the Royal Navy scamper away with a self inflicted bloody nose. The captain of the light cruiser HMS Calcutta saved himself from a court martial by going down with his ship. Force K was not so much a force anymore losing half its ships. There is honour at stake for the R.N. here, let battle commence.

This is a linked scenario from the previous game so if you are following this the damage / lost ships maybe different so the following is only general guidance. Any sunk ship is lost. Any ship with damage I will remove half the recorded damage from the previous game so that it will start the next scenario with a reduced damage value, I do the same with lost speed. Any knocked out features like turrets / torpedoes etc I roll a d6 with a 50:50 chance that the feature was not as badly damaged as first thought and is available for this game. Once this is done you need to make a common sense decision on whether or not a ship would stay at sea, in our first game the Italian destroyer Libbecco had suffered a Fuel Fire and a Rudder hit at the end of the game and was below half damage points, its obvious that she would have sailed for the nearest friendly port.

Following your night attack on the Italian Convoy and the information obtained from that sortie the Admiralty have classed this action as priority one. Ships are en route from Alexandria but for now we have rushed the nearest forces to your location. Rendezvous with the new ships and continue your attacks on the Italian ships. The location of the forces means that you will be attacking in daylight. You will have the possibility of air support from either HMS Ark Royal or the island of Malta.

Following last nights attacks day breaks and you continue your route ready for attack from the air or the sea at any time. Realising the vulnerability of the convoy re enforcements have arrived to help ease your passage. The Italian Air Force will provide cover over the convoy. Be aware that a smaller convoy operating in the area is sailing towards you to join your convoy. Keep pushing on for Tripoli these supplies are vital to the war effort, you must get through.

Set Up (This includes our losses from Game 1, if following along use your losses)

Each convoy will be supported by 1 flight of 6 CR-42 Fighters.

Set up at maximum destroyer gun range both sailing in the same direction, Convoy Zeta should set up about 10,000 yards ahead of Convoy Acca.

As with the last game this encounter should last about 10-12 turns or an evening gaming session, at the end of that time the R.N. ships should receive a recall message to disengage and shadow the convoy at distance awaiting re enforcements.

Air Power should be allocated at random, we have a separate air phase in our game turn and during that part of the turn each side rolls a d20 with the following results. Each flight is 6 planes.

The R.N managed to avoid colliding with each other in the first few turns which was a great improvement on game 1. However things went badly in the first few moves, turn one, a long range ranging shot hits HMS Kimberley causing a fire on her deck, luckily her crew were able to extinguish it before it did any real damage.

As the fleets closed the range there was little action for the first few turns until turn five when some quality dice rolling by the Italians obtained 6 hits on the Ajax in one turn, location was rolled and two turrets were knocked out (British turret armour really is pants). Two turns later it got worse as HMAS Perth was hit, the shell causing secondary explosions and extra damage. 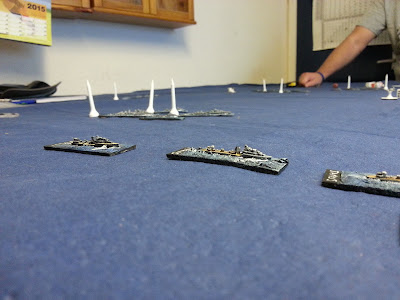 The tide turned quickly on the next turn with Garibaldi being hit in the funnel causing it to lose 7 knots of speed. Two Italian Destroyers Grillo and Coraziere where then sunk which led us nicely to a final turn climax.

The British had got their destroyers in a decent spot to lauch a torpedo attack towards the convoy and with a couple of decent air power rolls the British had enough planes to mount a powerful strike. Much to the relief of the Italians who were expecting a Convoy Splat, the attack went in on the Light Cruiser Squadron.

Dice, Dice, Dice dontcha just luv em ! The CAP phase of the air combat was short with the Brits well on top, the attacking planes pick their target, the Italians roll their AA defence, very poor, 3 Swordfish abort, its not looking good. 4 attacking flights go in 2 Bombers and 2 Torpedoes most have at least a 50:50 chance of a hit, NOTHING ! No Hits, Nadda.

Queue massive sigh of relief from the Italian player, just the torpedo attack to work out now, again joy for the Italians the torps were released just too soon allowing the ships to turn away. Apart from the Garibaldi who clips one torpedo track as she turns away. Its fine though the Brits need 8 on a d8 for the chance of half a hit, 8 is rolled followed by a 6 for the half hit and a torpedo slams through the belt armour of the Italian Cruiser, another 5 knots of speed and a big chunk of damage gone from Garibaldi.


The tide turned slightly back in favour of the British at the end of the second game, the Italians lost two destroyers sunk, one Da Noll retired due to damage whilst the Light Cruiser Perth was the major loss for the British, down to 1/4 of her damage points and with only one functioning turret it was back to port for her. The convoy however remains very much intact.

The British were starting to withdraw naturally as the game came to a close, ordered by the Admiralty to shadow the Convoy and await re enforcements. As we approach dusk some big funnels are visible in both directions, just time for some big ship action before the sun goes down. Tune in for part 3 soon.
Posted by Yarkshire Gamer at 14:04:00