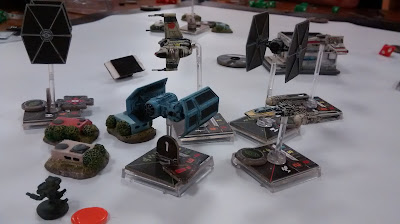 Our base on the planet Radix has been destroyed in an Imperial attack and we are going all out to save all those resources yet to be captured.

The base was home to a group of scientists who are working on a counter to the Empires cloaking technology. They have made a break for it in a group of speeders and are heading for a rendezvous with a ship to enable them to escape the planet with their equipment.

Protect the speeders until they are safe. Remember you will be flying within the planets atmosphere and close to the surface, which I hear is quite unforgiving.

Crank Case purchased a Kalidor Crescent (adds pilot skill slot to ship)
Spike Sharpie had to pay a compulsory insurance excess on his E-Wing after it was lost last game.

N.B. Regular readers will know that a pilot who loses his ship (and survives) gets a new ship the next game, they loose any ship upgrades but receive a pot of Galactic Credits up to the value of a basic B Wing. This was the first time we had lost a ship which had been purchased rather than one which came from the basic rookie list (A,B,X,Y & HWK), so we had to invent some new rules. It was decided that the player would have to pay an excess to regain the ship and this would be half rounded up of the number of points above the maximum rookie ship of 22. So a base E-Wing is 27, 5 above our base, half of the difference rounded up is 3 credits.


Rebel players set up on the top of the map within range 1 of the table edge, place one Speeder per 2 Rebel players plus 1 range 2 from the rebel table edge.


Empire Set up is 1 Tie per Rebel player (with 1 in 3 a named pilot, chosen as usual at random we had 1 PS1, 1 PS3 and 2PS4 with "Night Beast" PS5), then add a Tie Bomber for every two Rebels each armed with 4 missiles and a proton bomb. Finally add 1 Imperial Walker for each Rebel player, these set up within range 2 of the Imperial Edge

Game lasts 10 turns or until the Rebel Scientists exit the Imperial Table edge or are killed. 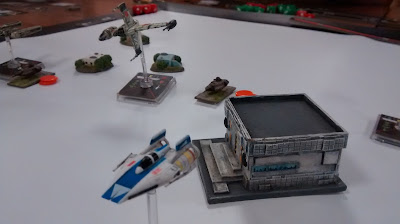 Terrain - Defined as either major or minor. All give 1 extra agility dice if fired through, if a ship base ends up on a terrain piece it loses its action for that turn, if the terrain piece is major it also looses its ability to fire. 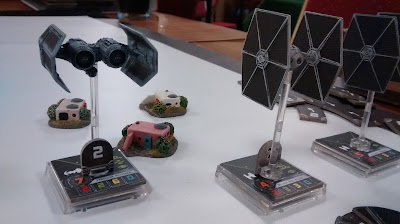 Just the four rebel scum this evening, with holidays etc so we had a relatively small game.

Another close scenario which could have gone either way, initially there was some long range skirmishing between the forces. The rebels chose to mass the Speeders and push them all down the board in one tight formation. The Empire retaliated by drawing all its walkers into one spot to counter this. Hard to hit from the air (basic 2 agility die plus 1 for air to ground and 1 for cover) the ground troops did quite well.

The Empire troops managed to blow up one of the speeders before it reached the table edge but it was hard work and as a result the Imperial Ships suffered, 3 being shot down. It all came down to the last two turns, the Rebels managed to get both of their remaining Speeders off both with just one Hull point left grabbing the win but only just. 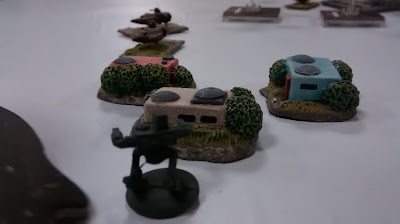 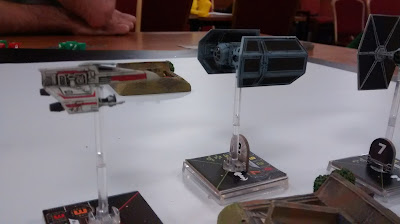 Jim head mechanic in the Rebel Garage was asleep

X Wing madness will return with game 17 in late August. A battle as the scientists try and escape the planet. 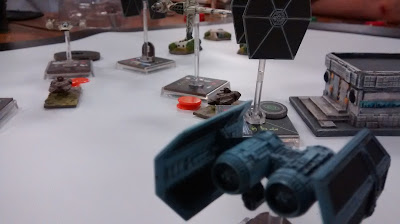