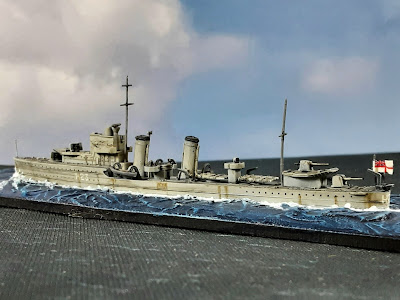 Two blog posts in a week ! My word is the blog coming back to life. Probably not but I've just neglected the blog for a while, but I still see it as the hub of everything that I do and the place to go to find links to everything else like the Podcast.

Every Project has an origin, sometimes it can be on the back burner for years, waiting for the right figures or it can be spontaneous from say a comment on the Podcast. This was one of the more immediate ones.

I was on holiday and did my Annual pilgrimage to Wonderland Models in Edinburgh, now I can't leave that shop without making at least one purchase, this particular day nothing grabbed my attention but rather than leave with nothing I picked up the above 1/700 Revell Bismark kit. 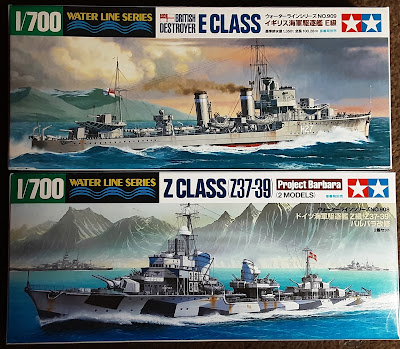 In true wargaming style, I looked at the model and thought "these would look good on the table" so I thought about it a bit and bought a couple of Destroyers to see how they would look, and it went downhill from there 😀

The Bismark model I had bought was full Hull so I cut that down to a waterline model and the madness had begun. 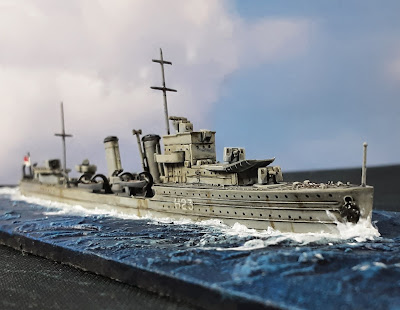 I've built and painted one of the models as a test, it's something I do with all new Projects. We already have a set of homebrew rules for WW2 which have a fixed size base for the class of ship, so in a highly technical fashion, I measured the largest Destroyer and decided on a base size based on that (it's 22cm x 6cm for those keen to know). 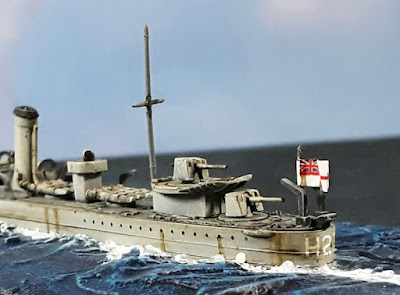 I got Warbases to custom make me some bases in 3mm mdf, I wanted the extra thickness to counter the potential warping issue on bases as these size. I made the base separately after drawing around the bottom of the ship model so that I could drop it in later. I find this a lot easier to do it this way for the painting process. 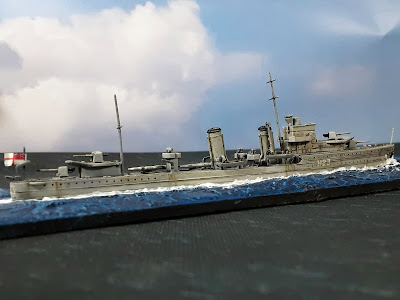 I used a Water Foam Effecf from AK Interactive for the first time on these. I have done thousands of Naval models over the years but never something this big so it was an opportunity to try some new products and techniques on it. 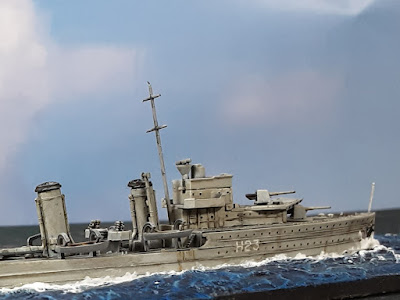 I built the kit but left everything off the deck and painted and weathered everything separately before gluing it together and doing some detailing. As yet I haven't added any rigging, to be honest I ordered some thread for it and when it arrived I realised I have got the wrong colour.

I used some grime and rust streaking on the vessel which has definitely given it a lived in look. I have to say I think this is the best thing I've done in a long time, if ever. Its got me really enthusiastic about the Project so where is it going to go ? 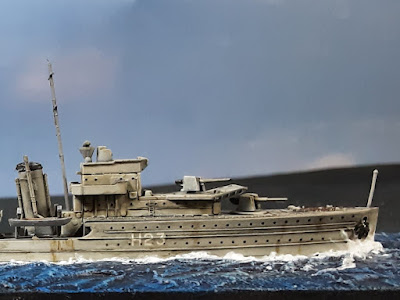 I've built this model as HMS Echo, she was one of the 6 Destroyers that where allocated to the Hood and Prince of Wales before their fateful meeting with the Bismark. So that is my initial plan, to do the ships for Denmark Straight plus a few German Destroyers (for some small scale games) and see how I feel then, my friend Stephen is going to do some Japanese so the madness is catching. 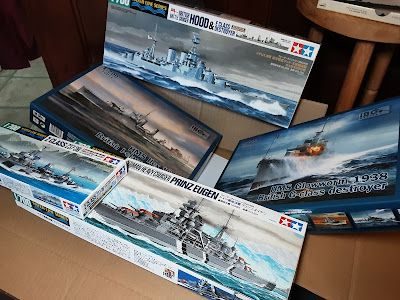 So I went on the tinterwebnet and bought a few kits. It's actually not that expensive, with GHQ 1/2400 metals being around 19 quid and likely to go higher with the current exchange rate, 25 quid for a big 1/700 ship isn't that bad. I've already built two German Destroyers and another E Class British one and they are primed and ready to paint. I've also built the Hood which took a couple of days to put together but looks amazing, the base for that is 42cm x 10cm ! 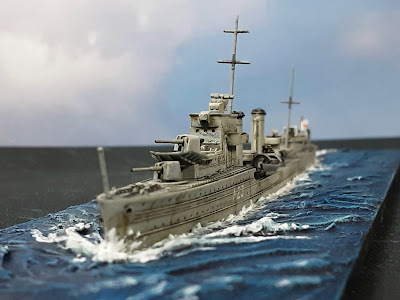 So there you have it, another new Project, with build and paint times quite long it will be a while before it gets on the table but like I said above a bit of Destroyer on Destroyer Action could happen before Xmas.
Those of you who have realised I've broken my One Period One Scale Rule are absolutely correct 😆
Posted by Yarkshire Gamer at 03:14:00