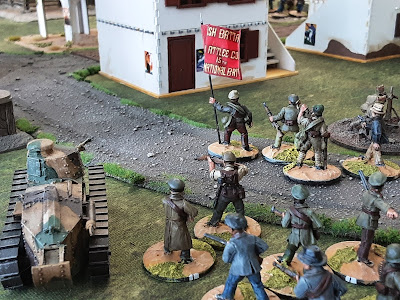 I've been posting less and less on the blog as the more immediate and shorter form social media platforms are becoming more popular as peoples time and levels of concentration reduce like water down a plug hole.

However this sort of post, the scenario, simply can't exist on a "blink and it's gone" format. 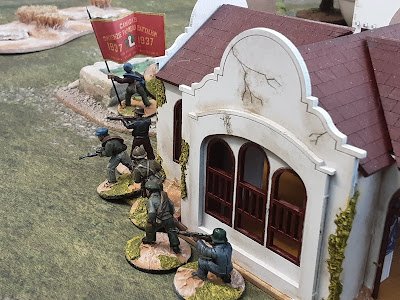 For our first post Lockdown game I decided to go for something we all enjoy and something which we have played that often we have a reasonable chance of remembering the rules after over a year off !

Spanish Civil War is a big favourite here and we have large collections of figures to choose from, we use a set of rules I developed myself and they are explained in the video below, if you are interested.

The scenario I used as a basis for our game is on the link below, which also contains a number of other resources for a variety of periods.

Please note that some unit choices are based on available figures not historical accuracy.

The Nationalists had failed to take Madrid by direct assault in late 1936, so their efforts shifted to cutting the city off by severing its main communications links to the north and south east of the city.

In early December they attacked in the region of Boadilla, northwest of Madrid to cut the Corunna road, with four mobile columns under General Varela. Heavy Republican counterattacks forced them back again, at the cost of high casualties to both sides and as a result both sides dug in and reinforced their troops.

Varelas columns were reinforced with conscripts, German trained Falangist militia, planes and tanks, although their best troops remained the Moroccans and Legionaries of the Army of Africa. The Republicans also reorganised their forces, incorporating the various workers militia units with regular army units into so-called ‘mixed’ brigades with a more formal military structure. The battle resumed in January.

The game is played with our own set of rules but is perfectly adaptable for any rules system. 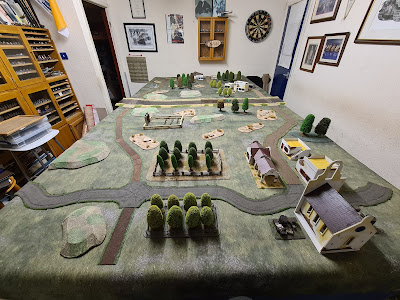 We used the whole of our 12 x 6 table with the set up shown in the photograph above, more detail on the following photographs. 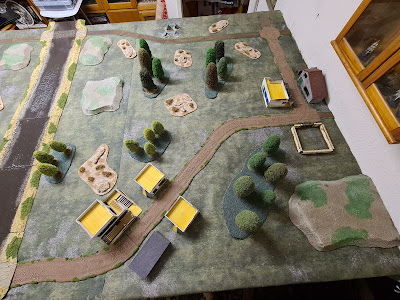 Photograph 1, viewed from the Republican lines and referred to in the write up as the right side of the table. 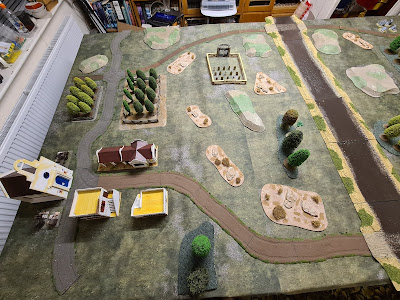 Photograph 2 again from the Republican Lines and the left side of the table, the two sides of the table are matched up via the central river (which was an excuse for me to use my new river !).

You should be able to see the terrain in the photos above, here are the explanations for them,

All woods are open and the two fenced areas with trees in on the left table are orchards. (-2 cover)

Hills are low and are sufficient to give Hull Down cover.

Their is one area of Rocky outcrop on the far side of the right table and this is a-2 cover.

The river is fordable in three places, two are clearly defined on the table, the third one is variable (see Nationalist brief).

All buildings can hold 15 figures and are hard cover (-3)

The Corunna Road is the grey coloured Road running up and down the left side of the left table. 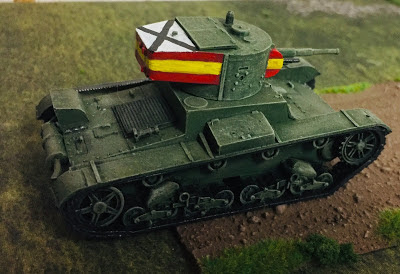 After a quiet period on the front the word is that a major Nationalist Offensive is on the way, the target is the Corunna Road and we need to stop them to keep this vital supply route to Madrid open.

You start the game with two units of Militia on the table, one must be set up on the right table and one on the left. Both must be set up with 6 inches of the dirt road that runs along the near side of both tables.

You are uncertain where the Nationalist troops will appear other than from the other side of the table. 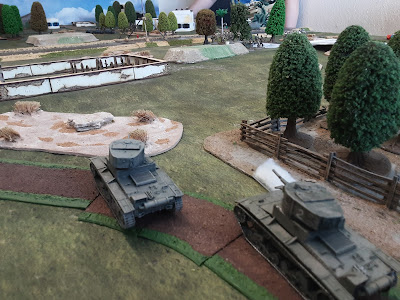 Each unit consists of 1 HQ with 3 Figs and 4 sections of 10 soldiers 9 armed with Rifleand a leader armed with either an SMG or a Pistol.

Reinforcements are on the way (see Umpire brief), Air Support may appear at random.

You will receive 4d10 finance rolls per turn. (We use this to buy support units see above video for explanation) there are no Infantry units available to purchase, just vehicles, Ammo and Support Weapons.

You're objective is simple, keep the Nationalists off the Corunna Road. 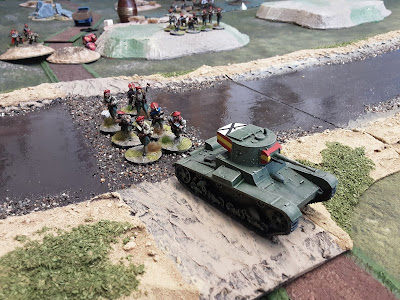 The advance on Madrid has stalled and despite heavy fighting you have been unable to force your way into the Capital, the latest plan is a flanking manoeuvre around the western side of the city to cut it off from its supply routes and supplies.

You begin the game with a single Cavalry unit of 18 men (1 HQ Sqn with 6 figures and 2 Sqns with a Sgt and 5 troopers) and they have just entered the table at the Nationalist entry point which is the road at the far side of the right hand table.

Behind this are three units of infantry, one Foreign Legion, one Moor and one Carlist. 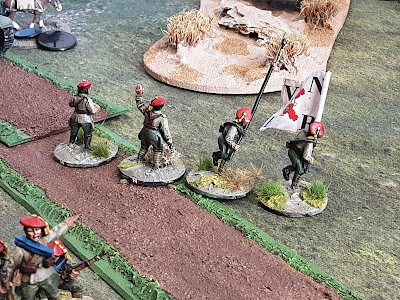 Each of these units have 1 4 figure HQ and 3 8 figure units. The sub units have 1 Sgt and 6 Rifles and 1 LMG (the Carlists have no LMG). They will appear 2 sub units at a time (in Battalion order) at the entry point.

Your mission is to cross the table and capture the Corunna Road.

Reinforcements are on the way and Air Support is available at random.

You will receive 4d10 finance rolls per turn. (We use this to buy support units see above video for explanation) there are no Infantry units available to purchase, just vehicles, Ammo and Support Weapons. 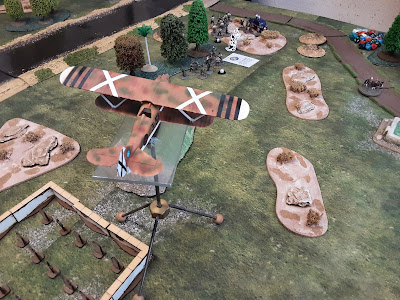 Reinforcement schedule is as follows,

Roll 1 d6 when the last of the 1st 3 Nationalist units enters the table, place the Republican Armour card in the deck and reduce the die by 1 each time the card appears, when you reach zero 2 x Republican will appear on the Corunna Road on the left table on the near edge.

Repeat this process when the tanks arrive this time placing an International Brigades Card In the deck. When this reaches 0 a unit of Internationals arrives at the same place as the tank. 1 x 4 fig Hq and 3 x 8 figure units, no LMGs.

When this is on the table the Nationalists receive 3 x CV33 Light tanks at their entry point.

Both sides then roll 1 d6 and these are reduced on the drawing of the Legion Hq and International Brigades HQ cards, when they reach 0, the Republicans receive a second unit of Brigadistas whilst the Nationalists receive 3 more units, again 1 Legion, 1 Moor, 1 Carlist, entry points etc same as before. 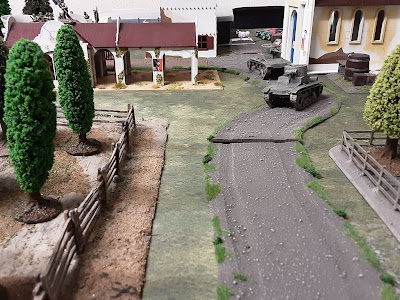 There is a third Ford somewhere on the River, either side can search for it. When a search occurs the player rolls 2d6 one red, one green. If on the first turn a double is rolled the Ford is located. If not the search is directed up the table on a higher red dice, down on a green, the distance being 2 x the difference in dice rolls.

When the unit reaches this spot they can check again but with a minus 1 on any of the dice (to effect a double and find the Ford) add one to this each time the Ford is not found. If you reach one if the marked fords the water level has risen and the hidden Ford is too deep to locate. 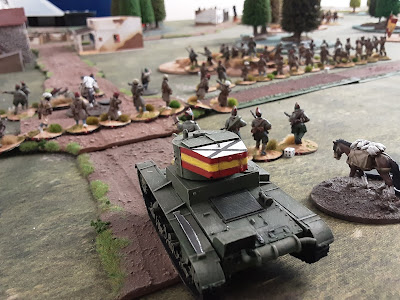 None scheduled reinforcements are purchased in our rules, see the video if you're not familiar.

20 pesetas for a Donkey (Ammo

25 pesetas for a Truck 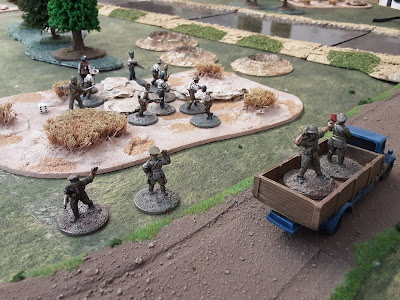 My mate Roger who attended the game has already done a write up on his blog, so that saves me a job.

Part 1 can be read here

And the final Part 3

Hopefully that will prove useful for someone, next up on the table was a spot of WW1 Naval.