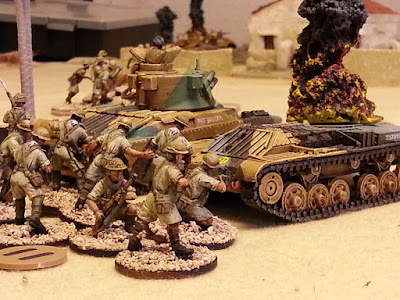 This will be the last blog post of 2015, so I will take the opportunity to thank all my readers for their interest over the last year and wish you all a happy and prosperous New Year, here's hoping that 2016 will be gaming heaven.

By way of background Brevity was a limited scale offensive conducted by the British in the Desert Campaign. It was intended to deal a blow against the allegedly weak Axis front line forces around Fort Capuzzo and that sector of the Libya / Eygpt border. The operation was a success for a very short space of time before German reinforcements were rushed to halt the Allied advance, the attack was called off by the British High Command after just one day.

Operation Brevity is one of the main areas of interest for our 28mm WW2 actions, with tech limited to stuff in theatre on 31-Dec-41, Brevity, Battleaxe and Crusader form the main focus of the games we will play.


I was looking to develop a game to include our rather large Italian forces along with some of the German units one of our regulars has just invested in, rather than go full out historical I decided on a game with a Brevity flavour based around a Fort Capuzzo style action. An Italian Force, lightly armed holding onto a defensive position around a fortified village being reinforced by German units against an initially stronger British Force.

I'm a big fan of variation in scenario set ups with variable arrival times and random reinforcements, most of the stuff we play could be repeated many times and the game would never be the same, not everyones cup of tea and it can lead to some one sided games, however rather that than a points system (uurgh I feel dirty even mentioning points systems !). 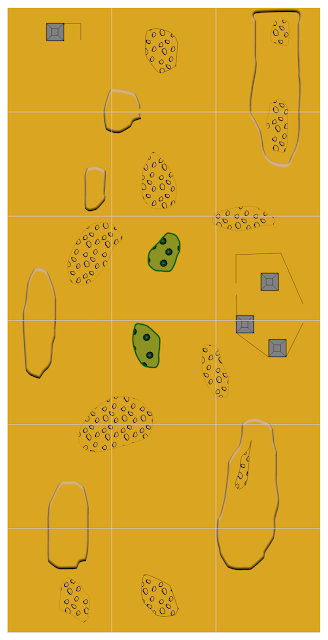 Above is a map of our table set up, table size is 12 x 6 (each grid square is 2ft sq), fairly open with some ridge lines and areas of broken ground offering limited cover.

Regular readers will be well aware that commercially available sets of rules rarely survive contact with our group and WW2 is the same. Our rules are based mainly on the Iron Ivan Games WW2 set but with a TooFatLardies style card activation system, we also have a system of random event cards to spice things up. Scale is about 1 fig / veh = 4. Morale as standard for your rule set.

N.B. During the write up of this post I have discovered that the AS42 entered service in Dec 1942 and therefore is illegal ! The person concerned will be dealt with (quite lightly though as it is rubbish !)

Italians can set up anywhere in within 2 ft of the right hand table edge, i.e the side with the fortified village. The AT guns are dug in and all Italian units start the game hidden. 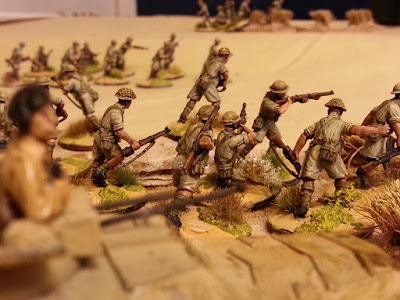 Three players took command of the Allied Troops and each had a similar force, each player had the following, all Allied units come on the table and are counted as spotted,

Player 1 set up in the top 4 ft of the table entering the table edge on their card activation, with an Infantry Co from the South African Royal Natal Carabiniers, 3 A13 Cruiser Tanks and a Marmon Herrington A/C

Player 2 in the centre 2 foot entering table with 1 Co of York and Lancaster Infantry, a mixed heavy tank Sqn of 2 Valentines and a Matilda with a Marmon Herrington as recon.

Player 3 in the lower 3 foot with another company of the Royal Natals, 3 x Crusader II tanks and a Mark VI Light Tank.

Objectives were straight forward the Allies were to attack and capture the fortified village, the Italians were to hold off the Brits until the Germans could arrive and drive off the Brits.

Different rules have different systems so if you are having a go at this game you may need to adapt the following,

Our unit activation deck contains a card for each of the units involved plus 2 cards for the Events and a Tea Break card. For those unfamiliar with this type of game, each card drawn activates that unit which then completes its move / firing etc before moving onto the next unit and so on. When the Tea Break card is drawn the remaining units are restricted in their actions.

More fun at YG HQ over a couple of gaming sessions on the build up to Xmas.

Each of our British players took a different course of action which lead to an interesting breakdown of action on the table. Ian in the North advanced rapidly with his A13 tanks leading the way, the Italian opposition on this side of the table was the weakest with a couple of units of Bersaglieri, the Italian Recon and an A/T gun dug in on the hill. There was a slight embarrassment when one of the A13 s was taken out by the Autoblinda but that was quickly put right as the remaining two made short work of the Italian "armour" on that side. In the middle it was a case of slow and steady wins the race, Lon packed his infantry in behind the heavy tank Sqn and then had to move forward at the rate of the Fat Badger, which is very slow. Faced with the fortified village in front it wasn't a bad course of action. 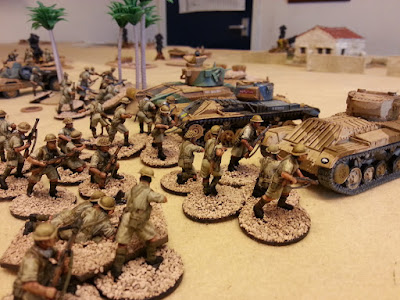 In the south Malcolm was faced with the hardest task initially facing the Italian Tanks hull down behind a ridge line and the other A/T gun. The terrain wasn't the best for an infantry assault and the sector bogged down into a static slug fest. The Italians had the advantage as the Crusaders stopped in the open to take them on, whilst the Crusaders added to the Lead content of the hillside the M13/40s took out two of the British tanks, the third eventually retreating to a hull down position themselves.

Steve was happy when his Germans took the table for the first time and the first card out was the three PzIIIs which changed the perspective of the game, having only played desert games against Italians before the PzIII was a bit of an eyeopener. They quickly took out one of the Valentines, it damaged the other which then promptly broke down of its own accord, the Matilda was hit a number of times but her heavy armour was a match for the Germans. The next German card was a unit of Pz Gren who quickly got into a prolonged long range firefight with the South Africans on the south side of the table.

The final German reinforcement was the Anti Tank Gun, a spectacular deadly weapon for the period, it set up in the village and managed to get a shot away, which for the Germans sadly missed, unfortunately it had set up too close to the British troops in the middle and was unsupported by any Italian Infantry. The crew were quickly put out of action by the surrounding British troops. 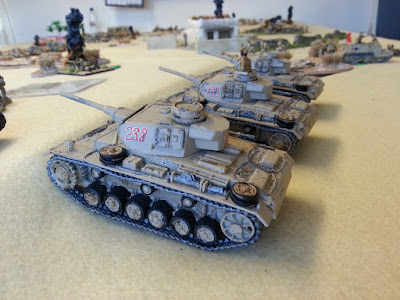 However the game was won in the North by the South African Infantry, the Allied reinforcements were nowhere near as exciting as the Axis ones, two lots of Infantry were first which supported the North and Centre followed by the Tank HQ which arrived too late to take part in the action.

The South African Infantry supported by the Marmon Herrington were able to clear the Italians from the northern ridge and from there attack the side of the village, supported by the York and Lancasters from the centre the British Infantry poured into the fortified area and the game was won.

So it was a Allied win but a close run thing, the PzIIIs were powerful but not able to stem the tide. Next up is our traditional Xmas WW1 Mesopotamia Game.
Posted by Yarkshire Gamer at 02:44:00