Starting the engines and firing up the lasers. 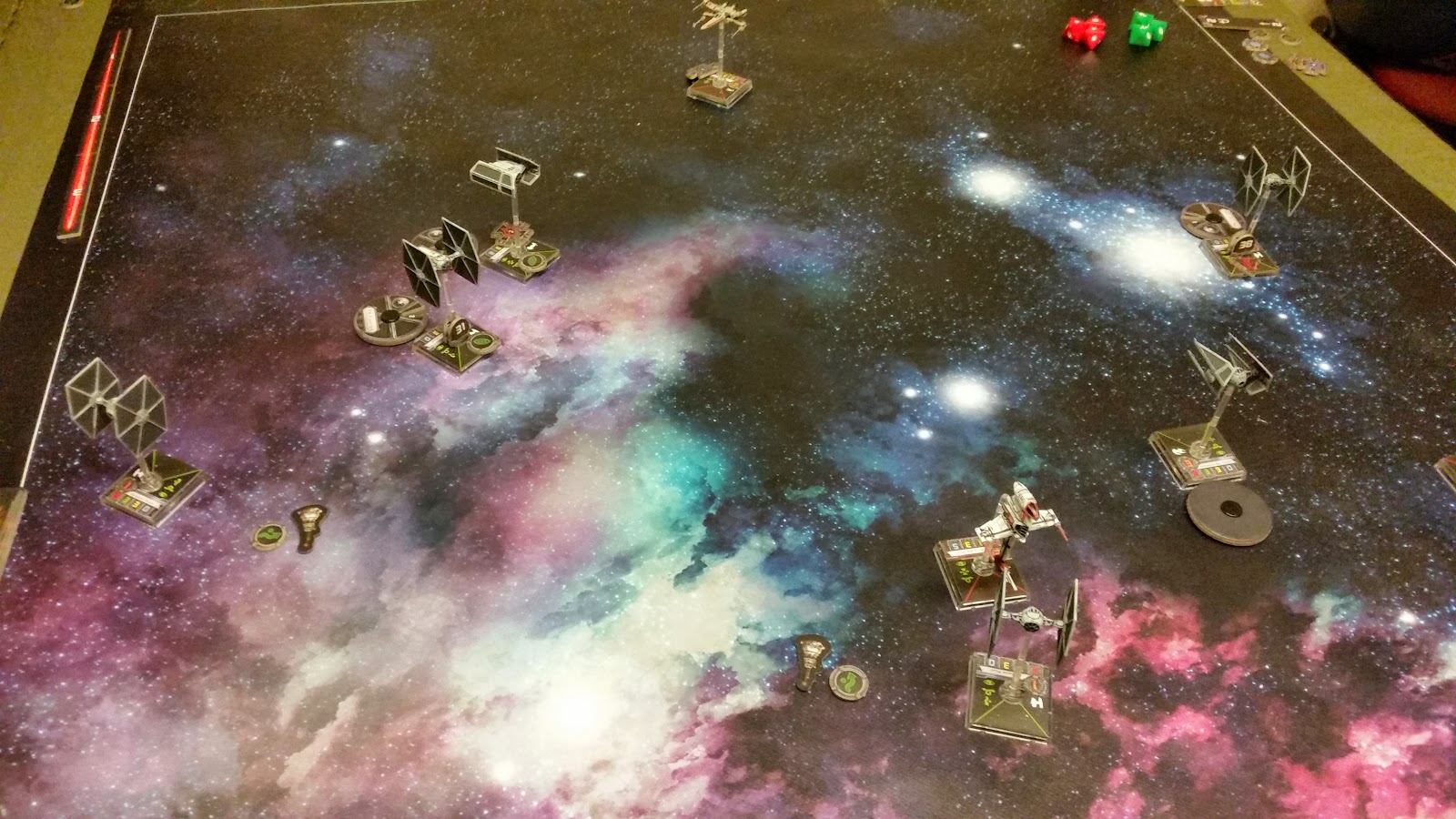 A couple of months ago whilst on holiday in Scotland I discovered and started to play X Wing, x-wing-holidays-and-common-ground-games. What a cracking game it is, I can see why its so popular. Well I introduced it to my regular gaming chums and the result was, as expected an arms race of epic proportions. Safe to say that most of us now have at least one of every ship available including the big stuff. Great to get a really well painted mini out of the box and straight into a game.

The only draw back to me of the game, and to be fair its more the players than the game, is the points system. I'll put my cards clearly on the table, I hate points systems, I hate the way it creates super lists and competition winning "builds". Want to see me do 100m meters sub 12 seconds, ask me for a game at the club next week and then suggest 100 pts, I would also suggest ducking.

So what to do to make the game more interesting, a campaign of course. I found the basis of our campaign on a website called Boardgamegeek and managed to download a PDF covering the basic outline and 50 odd scenarios, I did this a few months ago and can't find it now so sorry I cant credit its initial author.

This post covers the initial set up and first game of our campaign. Hopefully it will give you a few ideas and allow you to escape from the world of "Tie Swarms" and multiple Millennium Falcons. 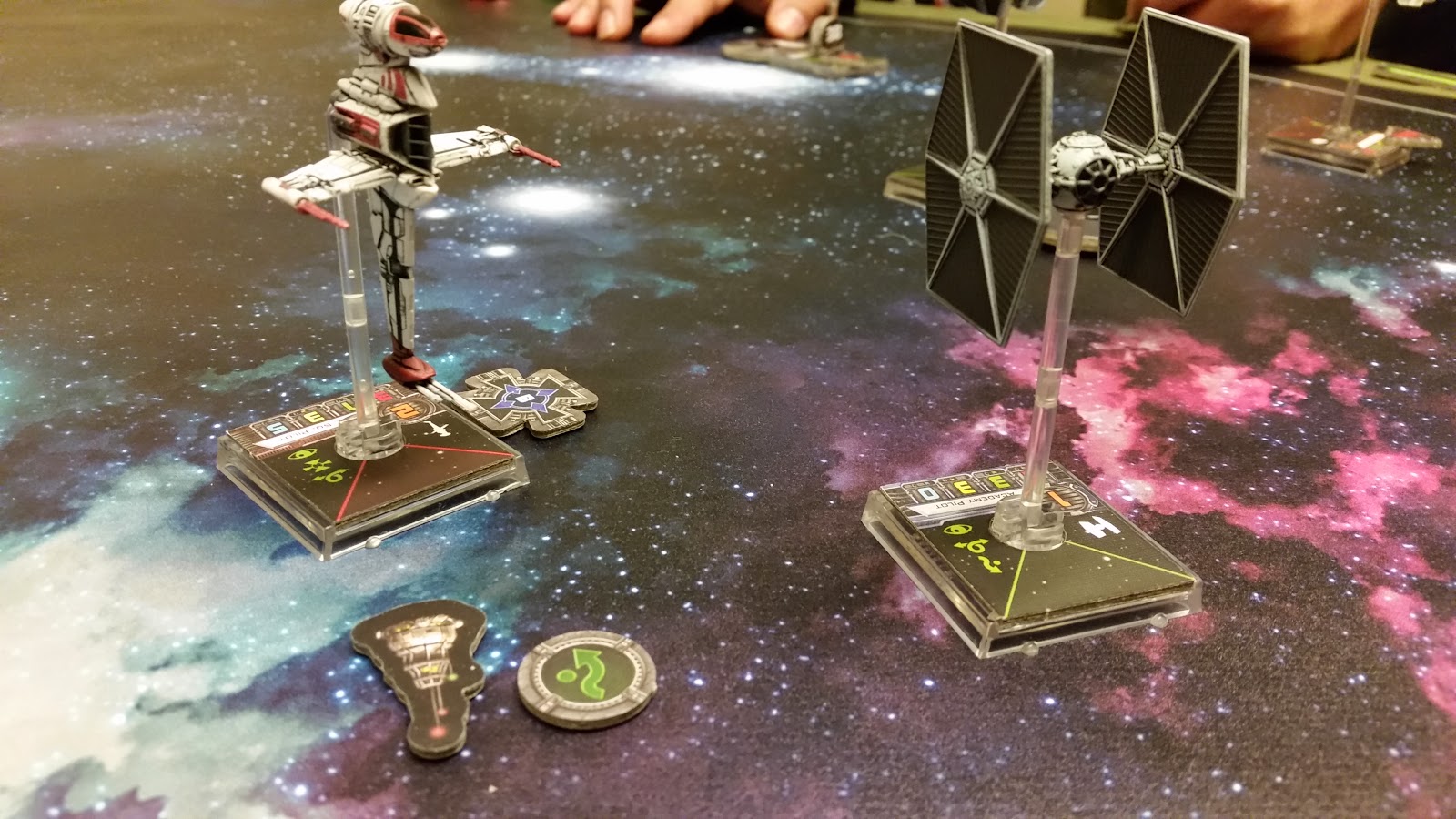 Campaign Set Up and the "Galactic Credit"

IF YOU HAVE ARRIVED HERE FIRST YOU CAN ACCESS ALL THE GAMES BY CLICKING ON THE X WING LABEL ON THE RIGHT, WHICH WILL TAKE YOU TO THE NEWEST GAME. ALL PREVIOUS GAMES ARE GIVEN AS LINKS AT THE BOTTOM OF THE LATEST POST.

The campaign players will take the role of newly qualified pilots in the Rebel Alliance, fresh out of training school they must start from the bottom and work their way up to better ships, upgrades, fame and fortune. The system does need a Campaign umpire who will also play the Empire ships.

Each player in their first game can pick any of the basic Rebel fighters, Hawk, A - Wing, B Wing, X Wing or Y Wing. It starts the game with no upgrades and the lowest pilot skill PS1. The maximum spend is 22 (i.e a basic B Wing) anything less is converted into GC or Galactic Credits, so an X Wing will gain 1 GC a Y Wing 4 and an A Wing 5.

As you progress you will buy bigger and better ships, you will however still get shot down, if you loose your shiny new E Wing the rules still apply, i.e you can only get a "free" replacement from the list of basic ships. The way round this is to take out an Excess on your Insurance policy. If you own an E Wing and it is shot down you get 22 GC for a new ship and so long as you have the extra credits to upgrade to the ship you lost you can pay the money and have it (If you don't have the cash you're back in the basic category. You CANNOT buy different ship types this way.

Galactic Credits are gained in the following ways,

Sadly you will get shot down, some more than others so there is a mechanism for that as well.

Roll a red hit die when you are shot down with a critical hit meaning the pilot is no more, any other result and you need to get down to the garage and see head mechanic Jim to beg for a new ship.

All upgrades are lost but you do get to keep your credits already in the bank. Your pilot however will retain all his upgrades.

As well as buying skills you gain traits from your kills.

The pilot with the most kills is designated the Sqn Leader once per game he can re roll any roll.

Once earned you can spend your hard earned monies on shiny stuff.

To gain a pilot skill level you pay the bank twice the level (max increase 1 per mission) i.e an upgrade to pilot skill 3 will cost you 6 GCs.

Upgrades cost 1 GC per point so an R2D2 upgrade costs you 4 GC s.

To gain pilot skills you have to buy a Pilot Upgrade slot for 5 GC and then pay for the upgrade.

You get a trade in of 50% on used goods so if you want a basic E Wing at 27 GC you will get 11 GC for your battered old X Wing and need to find 16 GC from somewhere, you can transfer upgrades from 1 ship to the next but you can only upgrade a ship in line with its upgrade bar.

Maximum of 2 upgrades per mission.

Allocate 1 PS 1 Tie Fighter per rebel player. As the campaign progresses you will need to beef up your Ties with named and squadron pilots. We use 1 random named Tie Pilot per 3 Ties and roll randomly for the Sqn Pilots.

Allocate the following Speciality Ships 1 for every 2 Rebel Players.

For each special ship roll 1d10, add 1 to die (per PS level) if ave PS skill of Rebels is more than 2. For the pilot randomly pick a pilot card from those available.

As the Campaign progresses and the Rebel Pilots improve and get access to new ships (as they enter the game in New Wave releases) the Imperials will need to get better to keep the Campaign competitive.

A good Umpire will use a combination of Scenario tweeks and Imperial ship improvements to keep the Campaign moving, writing this I have just written up Game 27 and I have prepped Game 28 so we aren't doing too bad.

So from Game 27 The new Empire random ship allocation is as follows, 1d10 per ship

Tie Fighters are 50 50 standard Tie and Tie/FO, the first ship of each type is a named pilot (drawn at random) then two random Sqn Pilots then another named.

Pilots for the random ships are drawn themselves at random from all avaliable pilots (including Sqn types) for that ship.

Upgrades, if the ship has an upgrade slot on its title bar, roll 1d6 per slot, if 4-6 it will have that upgrade drawn at random from those avaliable.

Briefing
Congratulations on graduating as a new fighter pilot, normally you would walk out to your new ship however the ship manufacturing plant in this sector has been captured by the Empire. Other Rebel forces will distract the occupying forces whilst you are dropped into the factory by assault shuttle. Grab a ship, get it started and get out of there, Good Luck and May the Force be with you. 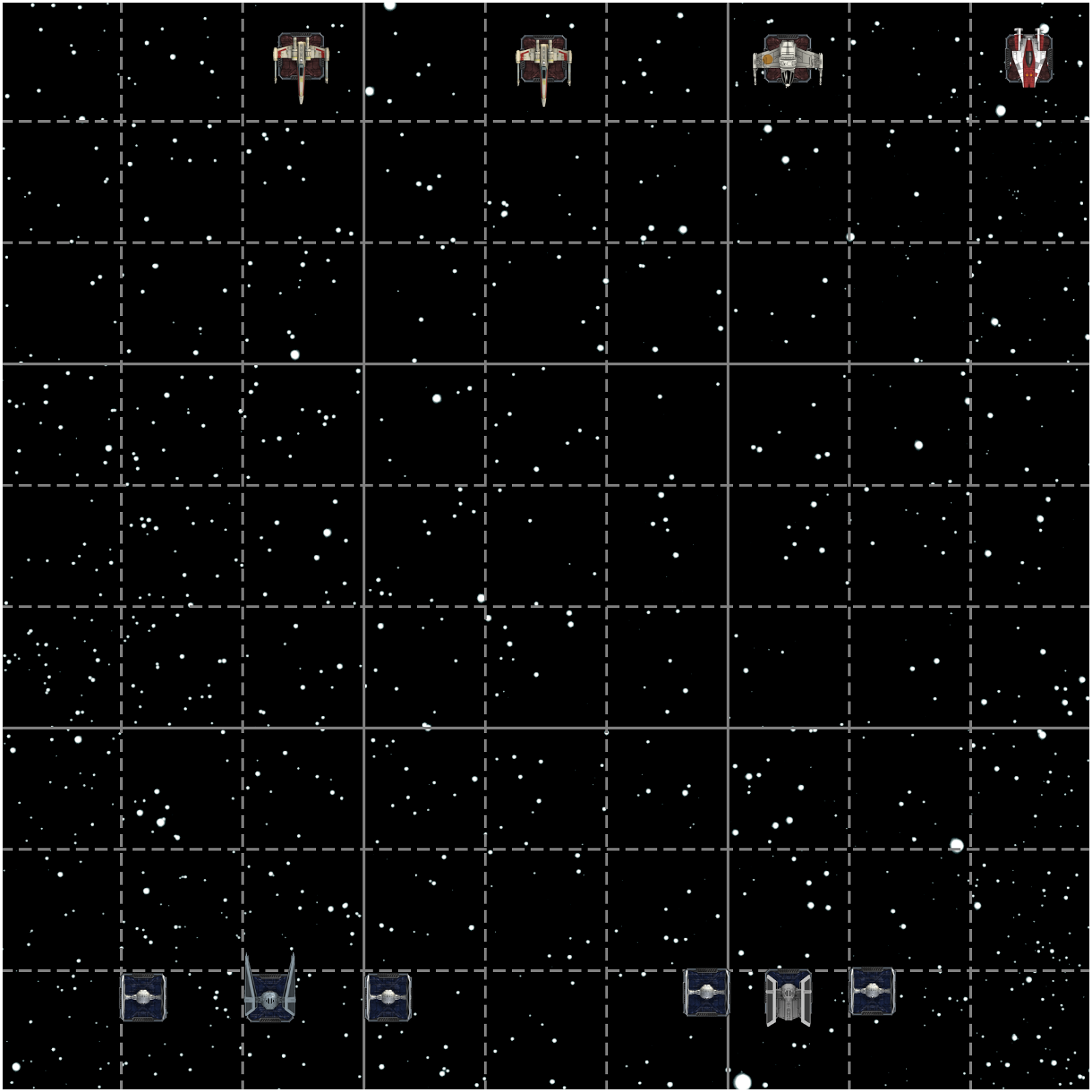 Set up as shown above, standard 3 x 3 space mat, Empire ships are randomly allotted based on number and type of Rebel ships (I'll do a full write up on this in a later post to keep this one readable), for our game we ended up with 4 skill 1 Tie Fighters, a Tie Interceptor skill 2 and Darth Vaders younger brother Jeff in a Tie Advanced skill 4, all set up range 1 from their base line. Rebel ships are on the ground range 1 from their base line.

Starting your ship - Roll 1 attack die per level of pilot skill plus one (Lvl 2 rolls 3 die) you need 5 hits of any type to start your ships, if not done by turn 4 it will start on its own, you have no shields until your ship starts so get rolling !

Targetting ships on the ground - Attacking ship must be in range 2 or less, each rebel ship is in a bunker it gains 3 extra hull whilst inside the bunker. Rebel ships can defend with green dice but cant use actions.

Force Field - The Empire have set up a planetary force field so no ship can leave the table until the start of turn 6 when a bomb pre set by resistance fighters on the plant will blow the generator.

Exiting to Hyperspace - To leave the table you need to declare your attempt and then try and gain 2 critical hits, hits from previous rolls carry forward.

Four new pilots set forth on their journey to fame and fortune on Graduation Day. Apologies for the names I didn't make them up.

Lagging a bit behind with real time, we are 5 missions in now so lots of reports to come.