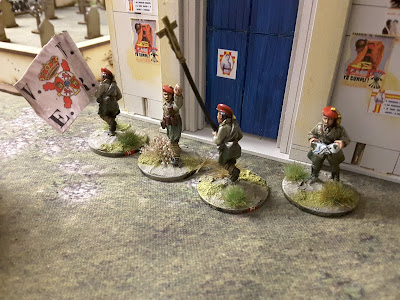 This is the after action report for our recent Battle of Quinto game, a part of a large scale offensive by the Republican Forces during the larger Belchite offensive in the Spanish Civil War, the original Scenario and background report can be accessed on the link below,

So here is the game report told mostly through photos taken during the game. So if you're familiar with the background of the game from the link above you will know that the Republican Forces are "tanked" up so the Nationalists used their initial reinforcement pot on some Anti Tank capability. 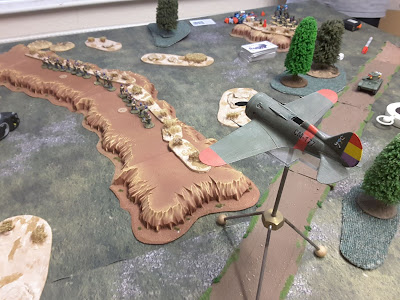 Air Support is random in the game but we seemed to be inundated at the start of the game here the Republicans use their planes to attack the Falange positions on the Purburel. 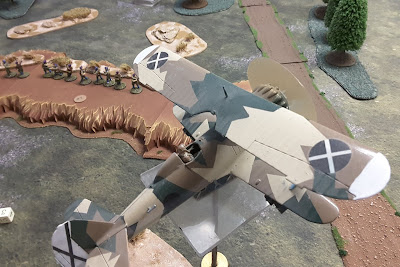 The Nationalist Air Force must have been on some performance enhancing drugs to begin with as their aircraft turned up 5 turns in a row, that's a 1 in 100,000 chance. 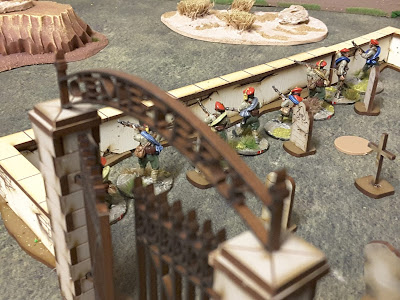 The Carlists set up camp in the Cemetery but come under heavy fire from the Republicans. 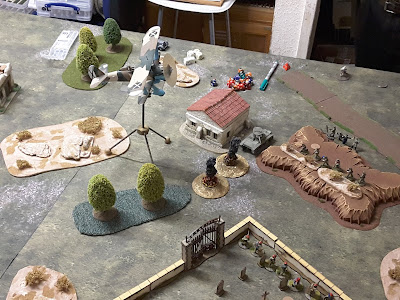 The Nationalist Air onslaught continues but on this occasion the bombs fall short of the T26 which was attacking the Cemetery. 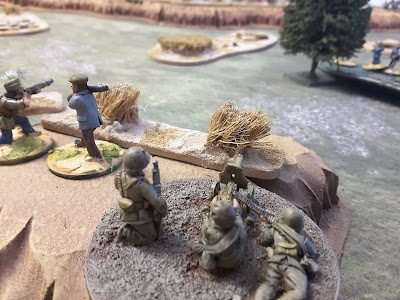 But it wasn't all Francos boys, the Republicans had spent their Pesetas on a Maxim and were pouring fire into the Carlist Infantry. 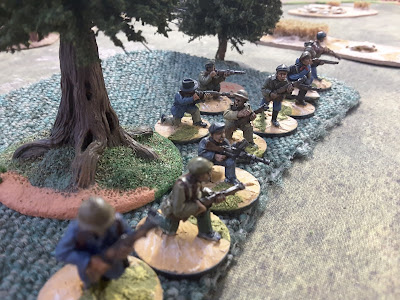 Opposite the Purburel International Brigaders were massing in the woods to launch and attack on the Falange. 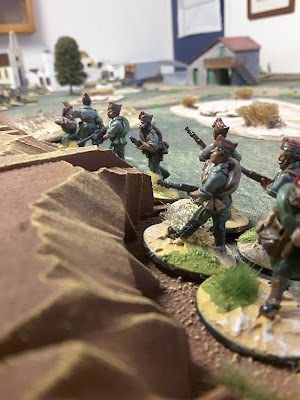 Sensing the attack was coming a unit of regular Nationalist Infantry rushed to reinforce the Falange, who had already taken a number of casualties from air attack and long range infantry fire (Yes I know they are Legion, I haven't got any Regular Infantry figures, yet). 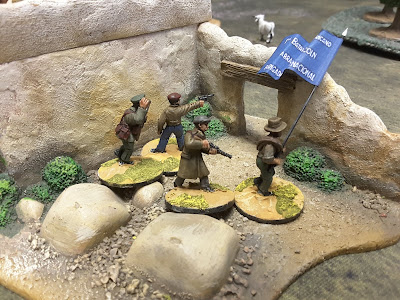 The centre of the battlefield was relatively quiet, the Lincoln Battalion had some decent cover and with the player covering that sector absent the other Republican Generals banked the Lincolns money and concentrated on their own attacks. 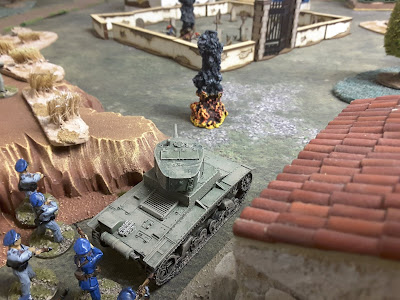 Meanwhile back at the Cemetery, Republican Assaltos are massing for an attack on the Cemetery but the Carlist General has invested in a Field Gun which is starting to find it's range. 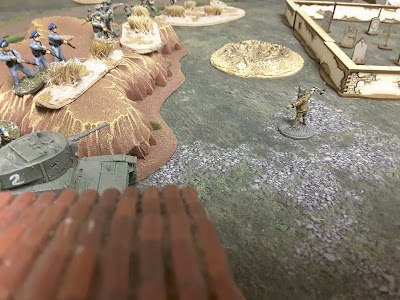 With the Carlist unit in the Cemetery wiped out a lone Dynamitaero rushes the T26, throws his bomb, but it misses, landing on the roof of the nearby building. 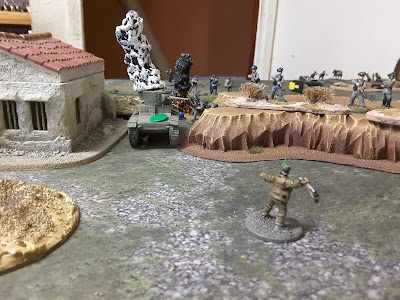 But the hand of fate falls kindly for the lone Nationalist as he activates first in the next turn and lands a bomb on the tanks turret rendering it useless. 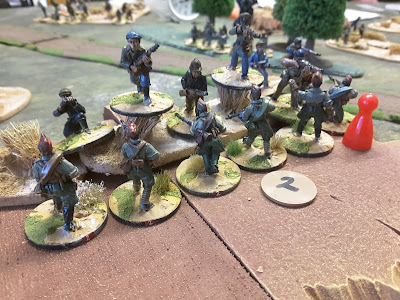 Back on the Purburel an unfortunate morale check pins the Nationalist Infantry allowing the Brigadista to charge forward and after a fierce hand to hand combat take the position. 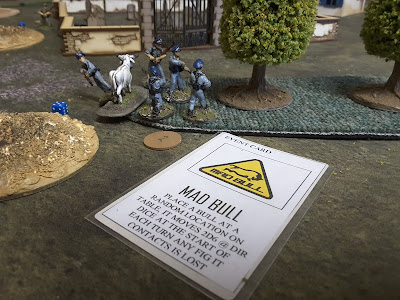 There is chaos of a different kind in the centre of the table as a Random Event Card sets loose a Crazed Bull, look out boys he ain't happy, he is heavy ! 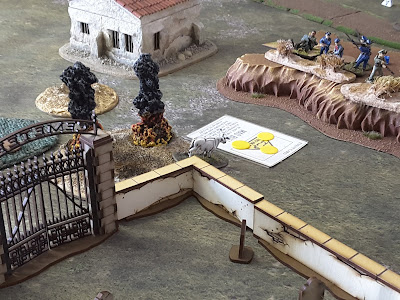 Having taken out 4 Assaltos the bull fronts up a HMG and some dug in Republicans before an Artillery round scares him off. 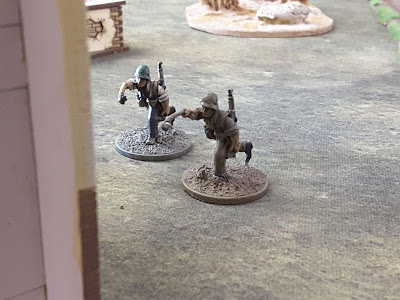 Things start to sway the Republican way, here we see two Dynamitaroes charging Quinto Church, there explosive charges clearing the building and giving them a foothold in the town. 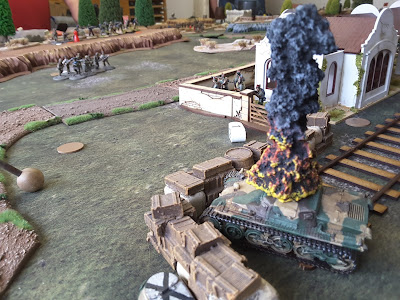 Buying Panzer Is proved to be a bit of a dud investment as one is taken out at long range by a T26 whilst guarding Quinto Station. 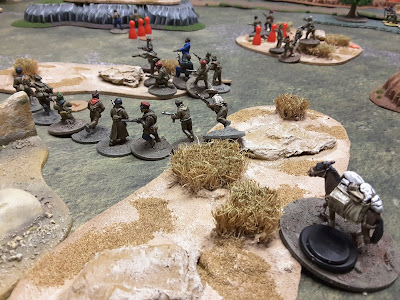 Sensing a change in the wind (and the end of the game) the Republicans threw everything forward. 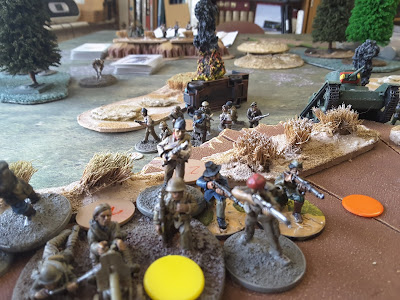 But in one of those random twists of fate a Nationalist Artillery Shell over shot the position on the Purburel and landed on top of a truck bringing ammunition supplies to the front line leaving all the troops on that side of the table short of bullets for the coming attack. The extended supply lines for the Republican Forces as they advanced proving a real issue. 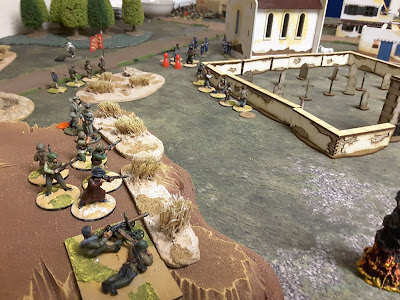 A newly arrived International Brigade Battalion pushed forward to support the remnants of the Assaltos in the Cemetery and Church, supported by a HMG. 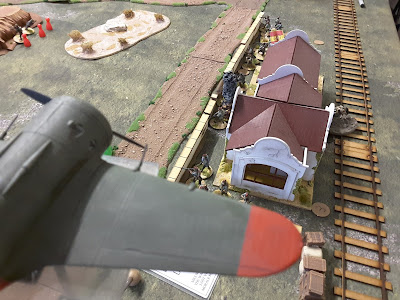 Timely arrival of a Republican Air Raid on Quinto Train Station gave hope to the attack of the POUM and the Brigadista. 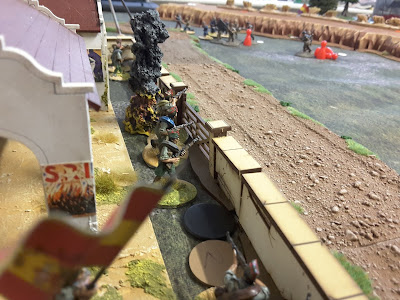 But it is a strong defensive position and the Republicans miss an opportunity when an event card stops fire for the turn, they sit still rather than take advantage of a free (from casualties) move forward. 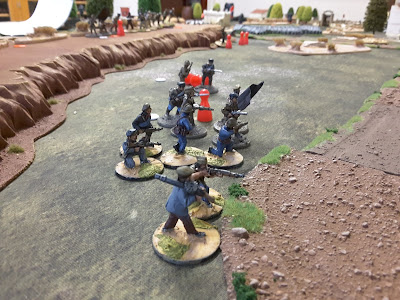 As they surge forward the next turn they come under heavy fire, crossing open ground is never easy. 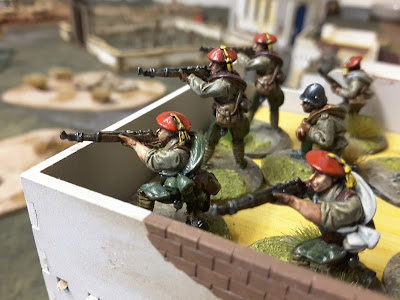 The Carlists left in Quinto take to the rooftops to pour fire on the advancing enemy. 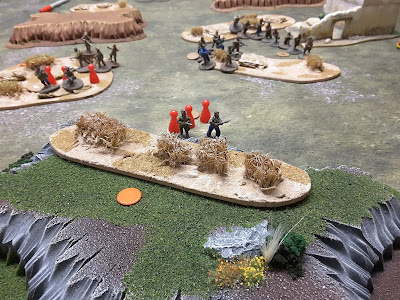 Sadly for the Republican Generals the attack of the Lincoln Battalion in the centre is stopped just short of Las Eras. 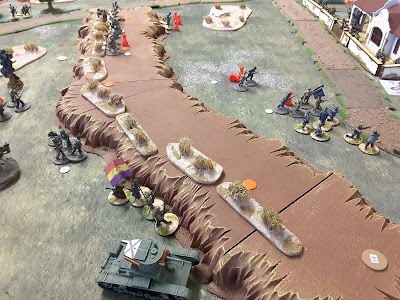 Likewise the attack on the Train Station is stopped by shear weight of fire. 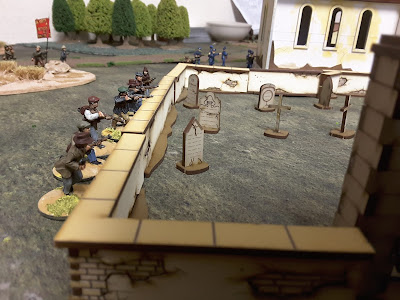 The British Battalion however managed to consolidate its position and began to dig in around the Cemetery, 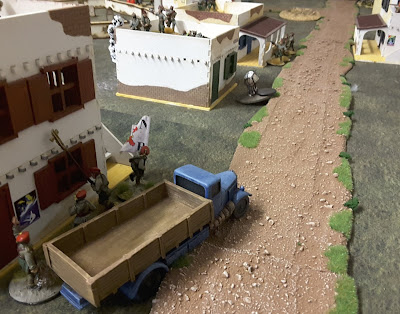 We called the game at that point with a Nationalist Victory, they had held onto the majority of the town, however full credit must go to the Republican Forces as they broke through the first line of Nationalist positions and who knows if extra pressure had been put on the centre early on it might have been a different story.

So another enjoyable Spanish Civil War game comes to an end. Definitely one of the group's favourite periods. I will be on the look out for scenario ideas to get the figs back on the table soon. Up next gaming wise will be the next part of our early war North Africa Campaign.
Posted by Yarkshire Gamer at 07:32:00