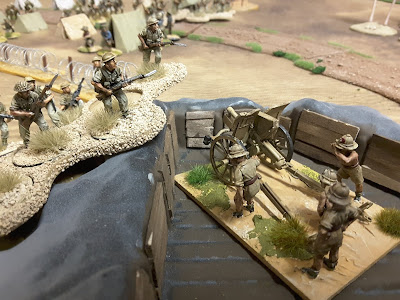 We are back in the Desert this week for the 5th Game in our ongoing Campaign at the start of the war. Today sees the plucky Brits led astray by a bunch of Kiwi Truck Drivers whilst the brave Italian Forces try to hold out.

The games are based on an excellent book by Robert Avery which is available from The Toofatlardies, there is a direct link to purchase the book on the Resource Page.

We use 28mm figures with this scenario taking place on an 8 x 6 table using a home brew set of rules, based on Iron Ivans Disposable Hero's.

Our last game was set on the morning of the 9th December 1940 in the Fort of Nibeiwa, this game is set on the afternoon of the same day just down the road (ok track) at the Fort of Tummar West.

This was to be a simultaneous attack with a similar adventure down at Tummar East, Infantry would lead the attack, supported by the Matildas of 7 RTR who were rushing (If a Matilda can rush) over from Nibeiwa.

The attack was lead by the New Zealanders of the No4 Reserve Motor Transport Company, instead of dropping off their Infantry cargo at the standard 500 yards from the target they raced forwards to within 150 yards and having stolen bayonets from the Infantry Bren Gun Teams they yelled "Come on you Pommie Bastards" abandoned their trucks and raced headlong into the Italian Defences.

Resistance was fierce within the camp and the Italians held out for quite some time before the fighting ended, it was only with the arrival of additional reinforcements in the shape of a Punjab unit that the Fort was taken. 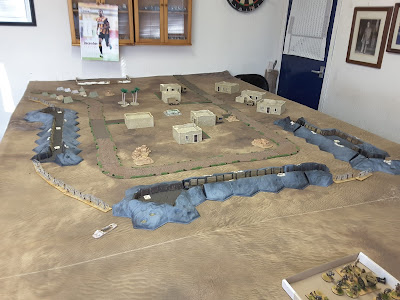 Above is a picture of the table used for the game, as in the previous match up I have only used 8 x 6 of our avaliable space. Everything is as you see it, the road is just a track and gives no movement bonus.

The crates are Ammo Dumps

The following Special Rules are in force,

The 2 sections will not have an activation card in the deck but will always activate first, after the Ammo Dumps have been rolled for and before the first card is turned. They are not subject to morale tests.

These rules also apply to buildings however they can only be set alight during the initial Artillery Barrage (see British Briefing below).

When stuck by Artillery or Mortar Fire an Ammo Dump will set on fire and have a chance of further explosions.

As soon as fire is set and once at the start of every turn follow the following procedure,

1. Roll 2d6 one plus and one minus, any minus and the wind direction changes (on the first turn of the fire ignore this), then roll 1d12 and 1d6 to indicate smoke direction from the fire the d12 indicates the clock direction and the d6 the number of 60 x 50mm smoke markers. So a roll of 7 and 4 would mean 4 markers at 7 o'clock from the dump. The dumps will burn all game once lit.

2. Roll 2d6 one plus and one minus, on any minus an additional explosion has occurred, roll 1 d 12 and a random direction indicator (the Spin for It App is ideal), the d12 is the distance in inches. At that location place a standard Mortar round and calculate any casualties as normal or if you are really good, set another Ammo Dump off ! Any double rolled on the initial pair of dice mean the explosions have stopped (the fire and smoke continues).

As in your previous game your brief is simple, clear all the active resistance from the Fort whilst minimising your losses.

Your Forces are as follows, all arrive anywhere on the far edge of the table as shown in the photo,

After turn 5 place the British Reinforcements card into the deck and roll 1d4 on its first appearance, that is the number of turns until the following arrive,

After the Tanks have been on table for 3 turns add in the British Reinforcements card again, treat as above, this time reinforcements are,

2 x HMG and crew each in a Bren Carrier

4 x Bren Carrier each with 1 x 8 man Punjabi Infantry Squad of 1 Sgt with SMG and 7 Rifles. I know 8 men is a squeeze in a Bren but I haven't got any more !

Once again you are faced with an onslaught of seemingly unstoppable Infantry and Tanks (although you still can't quite believe how slow those tanks are !), smoke and flame is all around, hang on as long as you can.

The Italians have a secret set up, I marked each building with a letter and put 3 letters along each of the trenches, each one can hold either 2 support weapons or 1 support weapon and a section of Infantry. Normal spotting rules apply.

Once the Italians have set up randomly select 4 buildings and or Ammo Dumps and these are declared as being destroyed by the strike, any troops in those buildings are lost. The areas hit will now be subject to the Ammo Dump rules above (note this is the only time in this game that buildings will set ablaze).

Those of you who are following the campaign will be aware of the streak of poor luck the Italians are currently suffering. This would prove to be the case once again. Table Set Up ready to go, in comes the Artillery Barrage..... and takes out the Italian HQ in turn 1 !

The British decided to push all their troops along the left side (as viewed in the set up photo) using the small walled area and then the tented area for a bit of cover.

The initial advance was helped with the draw of the Charge event card, perfect for the Kiwis, as the Italians had already fired,  they ran into the nearest building capturing it at bayonet point. The situation was going well as the Italians had set up an artillery piece in the forward trench which was quickly over run (top picture).

The British tanks turned up on Turn 7 and true to it's name Fat Badger got stuck and spend the next 7 turns trying to get free, not the best thing when you are in one of the slowest tanks of the war.

Using the trench captured in the charge against the Artillery, the Allies pushed down the table, Kiwis to the fore. But it wasn't all one way traffic, casualties were racking up for the British, something not seen before in this campaign.

The Ammo Dump and Smoke rules worked really well (considering I made them up the night before !) and visibility issues got worse when a Sandstorm kicked up in the middle of the table. Infantry advanced under the cover of smoke or defenders lined up a perfect shot only to find the wind swirl and the smoke position change. 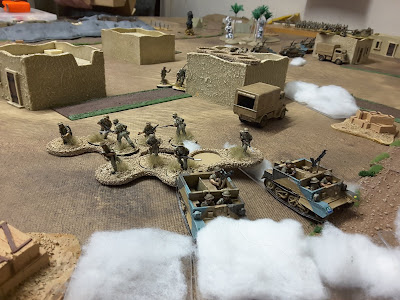 As in the real battle, the arrival of the Bren mounted Infantry swung the balance of the game in favour of the Allies, the commander taking full advantage of the high speed of the Brens to get the reinforcements to the right place quickly. 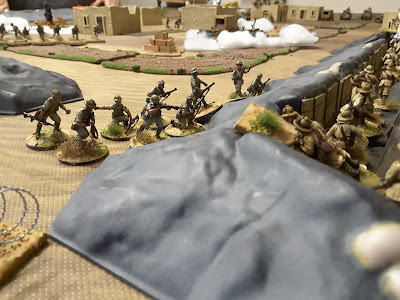 The last of the Italian Forces fell back on one of the trenches and stood ready for a final stand, things went well initially as a British section charged the southern end of the trench and was seen off with a bloody nose. However with concentrated fire the last of the ranged Italian Weapons was silenced leaving them with only Rifle armed troops. As the British had the ability to stand off with their HMGs and Lt Mortars we declared that the remaining Italians surrendered ending the game. 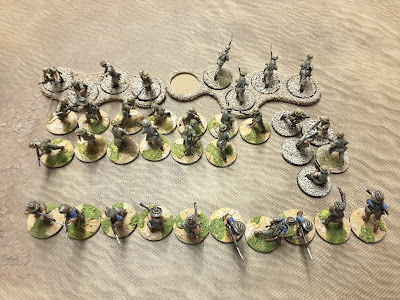 Result wise I have declared this as a draw, 2pts each , yes the British took the Fort but let's be honest there isn't any other possible outcome, the 36 Infantry losses for the Allies was by far the highest of the Campaign so far (they lost two in one game !)