"Onward to the Rhine" A WW2 Scenario Sept 44

A Rearguard Action Somewhere North of the Seine

It's that time of year again for a crack at our continuing sequence of games following the action across Western Europe from D-Day to the end of the war. Last time we recreated the closing of the Falaise gap and not surprisingly, although it was a close run thing, the Allies came away victorious.

Although the Normandy breakout is complete many units of the German Army are making their way East and when the terrain allows or a good Commander sees an opportunity an ad hoc defensive line forms and where possible precious reinforcements are thrown into the front line. Kampfgruppes and composite units must try to hold off an Armoured Division with Infantry support.

The game is played on a 12 ft x 6ft table, using 6 mm miniatures. We use a home brew set of rules based on the old Korps Kommander rule set. Each model represents approx 4 vehicles or pieces of equipment and each base of Infantry is around 50 men. 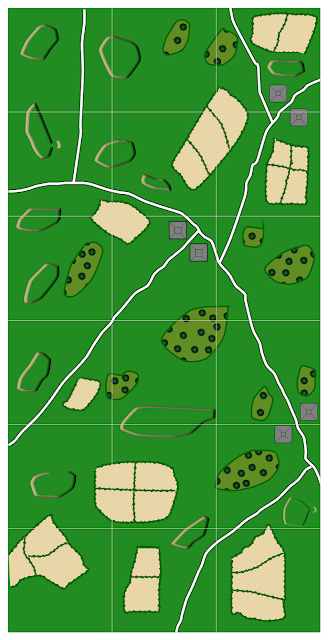 The Allied forces enter on the bottom edge of the table, German Forces Set Up anywhere on the top two thirds of the table. Germans should begin hidden, we use counters for each unit with a blank counter for every two real counters.

The objectives are straight forward, the Allies need to break through the German lines and race for the table edge, the Germans need to stop them. The game should last long enough for the Allies to have a realistic chance of reaching the edge of the table so that depends on your rules, I would go for 2 x the number of turns it takes a Standard tank to reach one end of the length of the table to the other.

Moving on table from move 1.

2 x Infantry Battalions each with (Morale 6)

2 Battalions of Royal Army Transport Corps each with

Note The Infantry Battalions are from an Infantry Division and therefore would not have their own transport but use the RATC units, for the whole of the game their are only two battalions worth of transport. Any units which arrive as reinforcements must share the transport.

Once the Allies have moved all their initial forces on table they will be eligible for fresh troops. The first unit will be an armoured btn from then on draw randomly from an Armoured or an Infantry Battalion. There is an Armoured Division and an Infantry Division allocated for the attack so there are 4 Tank Battalions (1 additional Guards Btn with Churchill's, Morale 8) and 7 Infantry Battalions available. If you have full Divisions (as we have) you may consider adding further units (Artillery / Armoured Inf / Tank Destroyer etc) into the reinforcement pool. After the first unit arrives a fresh unit will arrive every 3 turns.

Tank Battalion Orbat (Inf as above)


Note For ease of game play with our rules the Firefly's have been placed in their own separate Coy. For the Guards Btn just substitute all the tanks for Churchill's. All reinforcements arrive at the bottom of the map.

On table from turn 1 they should be allowed free deployment with no command radius restrictions.

2 x Infantry Battalions each with (Morale 5)

The Germans had a couple of options in their game plan, the cheap Aldi Pie defence (thick crust with no filling) or the Morrison's Pie (thin crust with a meaty filling). For none UK readers Aldi are a cheap supermarket, Morrison's a bit more upmarket and from Yarkshire. The Aldi option was chosen and the front line consisted of most of the good stuff with very little behind it.

The basic German Infantry have no transport so they were placed in the rear two villages or Festungs as we called them. Fortunately for the Germans the Allies moved on across the fields and where easily picked off by the German armour which had lined the hill over looking the fields, two armoured battalions were sacrificed trying to get across the fields but with hull down Panthers vs advancing Shermans there was only going to be one winner.

The Royal Air Force where the big let down of the day, statistically they should have been over the table every 4 turns however they only turned up once in the game. The Luftwaffe put them to shame turning up twice, once for a ground attack and once on a CAP mission.

The Hussars pushed forward on their right towards the foremost village, this side of the table was held by the STUG battalion and the Allies made steady progress reaching the edge of the village away from the prying eyes of the Panthers. Once the Allies got their 25pdr Batteries in action they started to whittle down the German defences but the heavy losses early in the game had dented the confidence of the Allied Commanders and they called off their attack.

This was much to the relief of the German players who must have had excellent poker faces. The thick crust had held but only just, there wasn't much left and the front line was just about to fold in the centre and there was nothing much to stop a race for the far table edge, just a couple of static Infantry Battalions who could easily be driven around.

The Germans did get a Company of Tiger I on the table but they only just made it to the front line when the Allies capitulated.

With Project Jutland on the go it seems to be all Naval at YG for the moment however we have had a nice break with this game and next on the table with be our 28mm ECW collection for a crack at the First Battle of Newbury.