Once more into the breach... 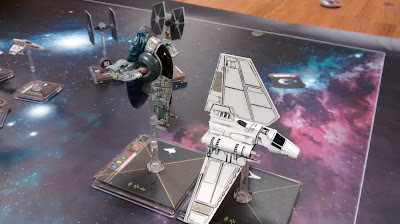 A rescue mission today boys, Queen Sante the Rebel sympathiser has been captured by a Bounty Hunter and is en route to a nearby Imperial Interrogation Centre. She holds vital secrets in her head and we doubt she will be able to resist questioning for long.

Our only hope is to get her before she reaches the inquisitors hands. Deal with any escorts but your main mission is to disable the Bounty Hunter and get the Queen away unharmed.

The General won't be impressed if you vapourise her and the Bounty Hunter ! 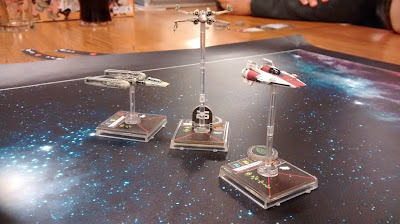 Rick O'Shea was at Rebel HQ for Tea and Medals and thus missed a mission for the first time. 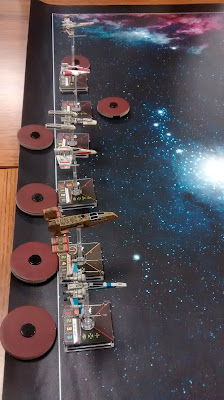 Empire ship selection is as follows, Start with the Firespray add 1 Tie per Rebel player, every third Tie will be a random named pilot, all other Ties are PS1. Add 1 specialised Empire ship per six Ties, we ended up with Jeff Vader again, for the second game running. 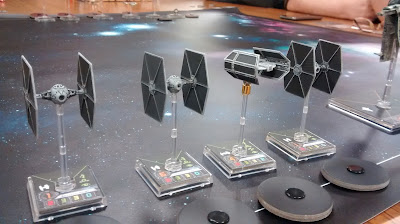 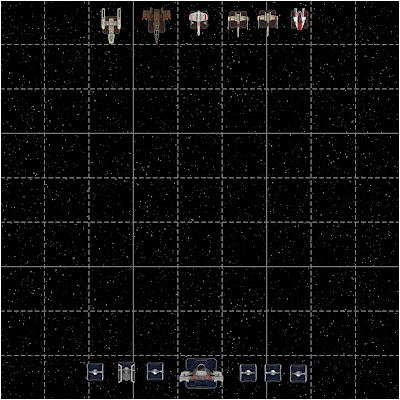 Rebel Players set up anywhere on the top table edge range 1 from the edge.

Game lasts until one side secures victory or the end of turn 10. 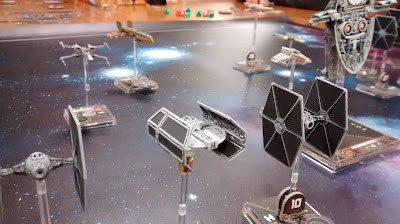 Imperial Re-enforcements - When the Rebel Rescue Shuttle arrives the Imperials will receive 2 PS1 Tie Fighters who will arrive on a random table edge, these ships sole mission is to attack the Shuttle.

Firespray 31 - Contains the Queen, when the ship drops to 2 hull points its electrics will short and the ship will drift and its weapons are disabled. From this point the ship will drift, moving a straight 1 towards the furthest away table edge for the remainder of the game. If the Rebels get a bit enthusiastic with their shooting and shoot down the Firespray the Queen is killed and the game lost.

Rescuing the Queen - When the Firespray is disabled a Rebel Shuttle (use a captured Imperial Shuttle PS8 & Anti Pursuit Lasers) enters play. When the shuttle is within range 1 of the Firespray it can use an action to place a tractor beam on the Bounty Hunter and take it in tow.

Once under tow the two ships move as one with the Firespray placed behind. Imperial ships may not target the Shuttle from its rear arc for fear of killing the Queen.

Protect Action - Any rebel ship within range one of the Shuttle can use a Protect Action and place an evade token on the shuttle, sacrificing its own action for that turn. 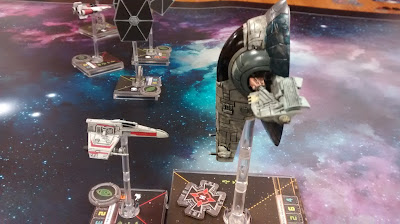 Tonight saw the first ever mission without the mighty Rick O'Shea on table, having been involved in the previous 22 games it was certainly unusual to not have his K6/B Wing blasting everything out of the stars. Spike Sharpie our last remaining veteran of all 23 missions stepped up into the Squadron Commanders seat for the evening,

Much to the joy of the Imperials Jeff Vader was back, after not being involved for a number of months he turned up two weeks running, wet tray in hand.

Captain Tangent managed to get his A Wing a little too far forward and ended up taking an early bath. Blown out of the sky by the Firespray. He survived the dice of death and will be back in a new ship soon.

Our Hawk didn't survive either, this fragile ship just never seems to survive long enough to get tricked out enough to become a decent ship, I think Pop Cicle has his eyes on a new K Wing.

It was the Rebels who managed to stay on Mission this week, they only shot 2 ships down during the course of the game and managed, just to disable the Firespray without blowing it up. The Shuttle arrived and just managed to get the tractor beam on the Queens ship and escort it off table on turn 10, a close scenario which could have gone either way. 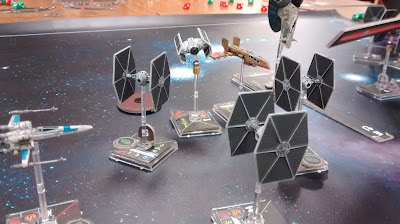 X Wing madness will return with game 24 on the 16th of March 2016. A mission which will see our Rebel Pilots protecting a Frigate from a swarm of Imperial Assault Gunboats. 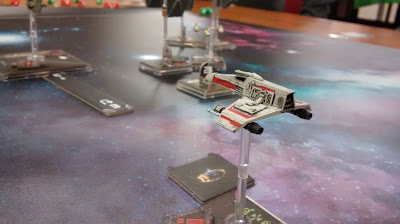 Jim head mechanic in the Rebel Garage has his work cut out as two ships failed to turn up back at base, anyone got a spare K Wing manual.

Pilot upgrades prior to start of game 23 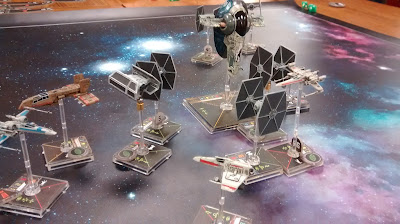