Well ladies and gents here we are a year on from the first go at X Wing and still going strong, thanks to all those who have visited this site, liked on facebook, favourited on twitter or commented on in the various forums around the gaming community.

I honestly believe that without a structured campaign system I would have stopped playing the game a while back, don't get me wrong its a great game but I don't get or like the points and squad building obsession that goes with the competition side of X Wing, that's not a criticism, its horses for courses and I've saddled up a Tie Interceptor on the campaign trail. Fly Casual Dudes !

I've had a bit of a tidy up with the format of the posts which I will use from now on, I have assembled all the uber geek stuff at the bottom of the post with links to all the previous games as well, enjoy.

For those who don't know, this is a continuation of the X Wing Campaign, full explanation and details of Campaign rules are here.

The nearby planet Gavos contains deposits of the rare element used in the manufacture of our shield systems, the Imperials have launched an attack on the mines on the surface in an attempt to deny us this vital resource.

Nothing fancy today, get in there and stop them. Remember your flying in an atmosphere !

All empire ships set up within range one of their table edge.

At the end of turn 4 you will receive another Tie Bomber tricked out as above as a re enforcement. Add a further Tie Bomber per surviving 2 mines over 2.

Empire ships are determined at random see the campaign rules for full guide. The first none Tie Fighter ship must be a Tie Bomber for this game.

Set Up (played on the Battle of Hoth game mat) 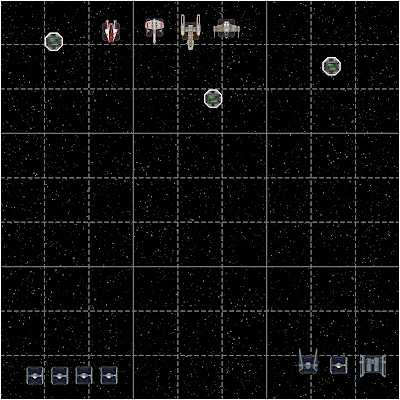 Rebel players set up on the top of the map within range 1 of the table edge.

Start with 1 mine shaft (represented by the counters above) and then add 1 more for every two rebel players, set these up randomly within the rebel third of the rebel side.

Groundbreaker Bomb - Attack 5 vs ground targets ONLY. Counts as an attack, no target lock required can strike anywhere within range 1 of the bombers ship base. 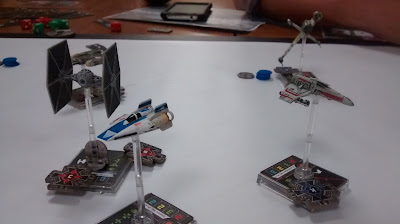 Just the 4 players tonight and only me on the Empire side, a wicked Alien virus appears to have been unleashed on the masses.

A nice straight forward game for the campaign tonight, nothing fancy.

For Night Beast in particular it did turn out to be "straight forward" every time he tried to turn left for the first 5 turns he failed his atmospheric roll and ended up going straight ahead ! Frustrating but the kind of fun which separates these games from competitions.

A tough game for the Rebels to win but with Tie Fighters on the table there is always a good chance of blowing something up.

Comedy Moment of the week was the Empire again (see photo below) a perfectly planned manoeuvre where one Tie Fighter was dialled to overfly the target on a K turn whilst the other two would tight turn in from left and right to finish off a mine. Tie one failed its atmosphere roll so it went straight on meaning that it would fly off the table next turn. Tie two tight turned right and ended up over the top of the mine and couldn't fire at it, whilst Tie 3 failed its atmospheric roll and did a shallow turn rather than a tight turn and ended up out of arc. So from a guaranteed 9 attack dice on the mine I ended up with none. Bugger.

The Tie Bomber got left alone by the Rebels and managed to take out one of the mines quite quickly, the second mine was chipped away at by the other ships and then finished off by the Bomber as it rolled out of its attack on the first mine. With the game lost the Rebel started to punch out as the second Tie Bomber approached.

Spike Sharpie was shot down in his E Wing (again !) but luckily he survived and had sensibly paid his insurance excess to allow him to get back (if the Rebel Commanders let him) in an E Wing next game.

It wasn't all Empire though the Rebels helped themselves to 5 kills during the evening and a cascade of credits from the Galactic bank.

X Wing madness will return with game 20 on the 18th of November. A mission involving the fledgling construction of a "death star" will see our first tie in to the films. 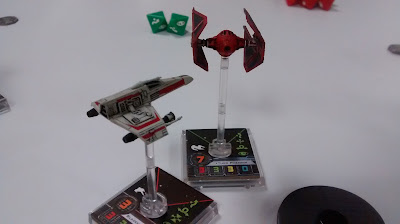 Jim head mechanic in the Rebel Garage has a new E Wing to prep.

Pilot upgrades prior to start of game 19 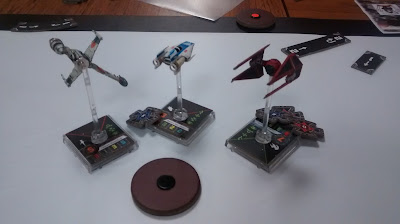