A Whole Brigade at Once 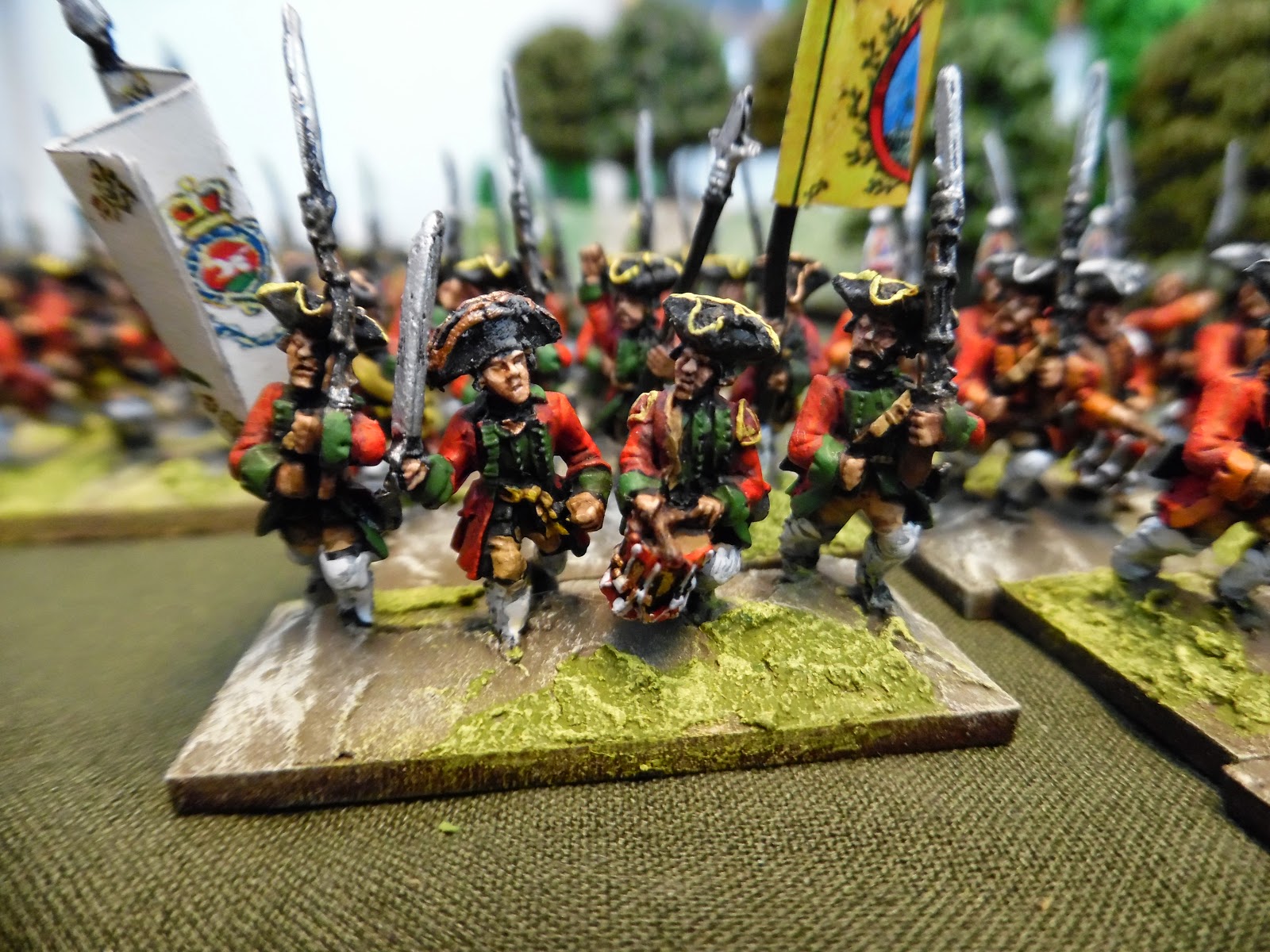 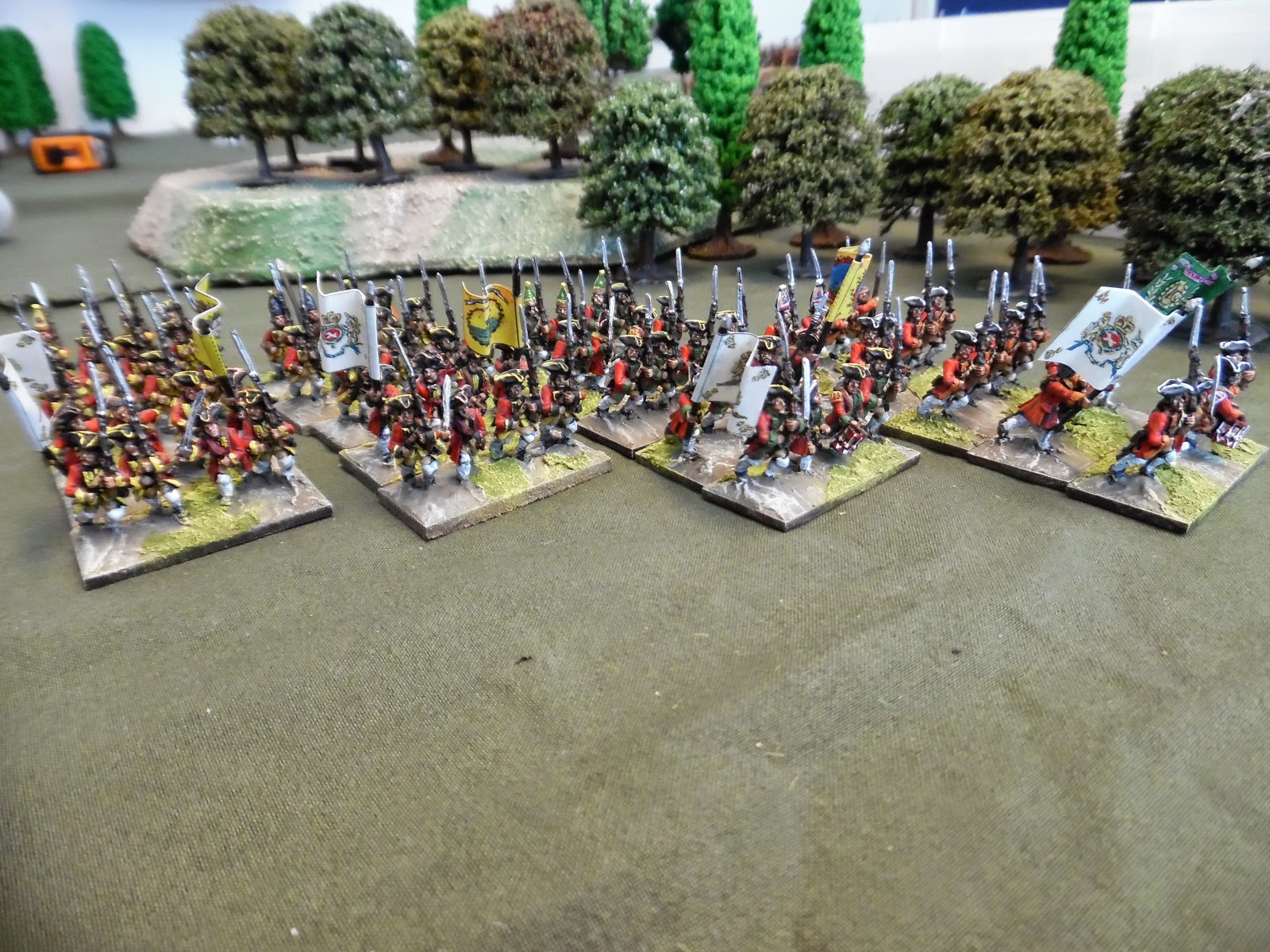 This may look like my entry for "Most obscure blog post of the year"and it may well be a candidate to be the least popular, we are getting into the realms of a tutorial on a minority nationality in a minority period here. Hopefully it will be of use to some, it will certainly be of use to me when in 5 years time I suddenly decide I "need" some more Hanoverian Infantry but have forgotten how I painted them before.

The figures are Old Glory 15s bought years ago probably from Old Glory themselves when they still did 15mm figs. 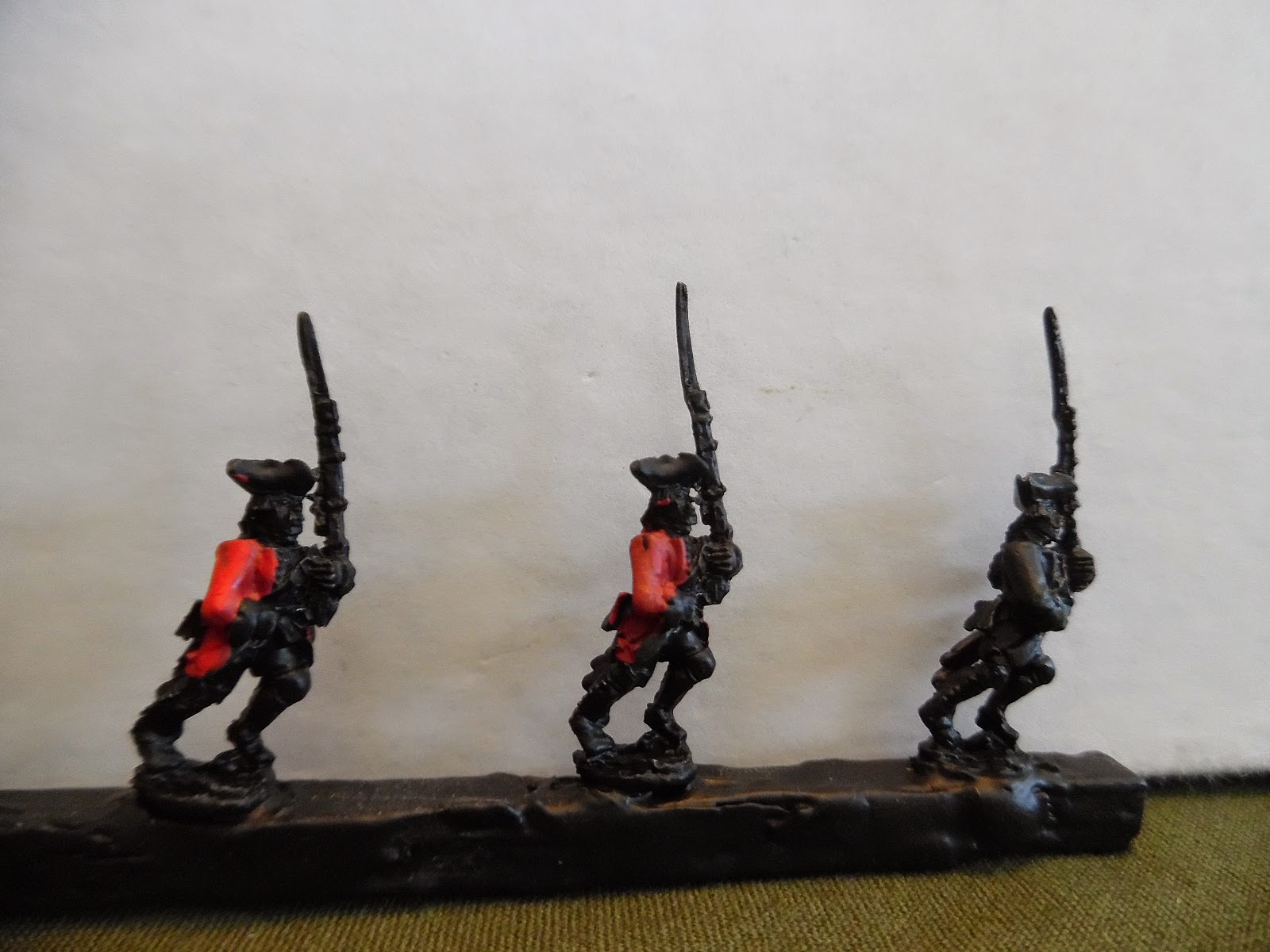 This is the first Box to Table dealing with 15mm figures so a little introduction on figure preparation, after cleaning up, which with Old Glory always takes an age. I then use a tacky glue to stick them to a piece of square dowling. I usually put about 8 figures on each strip grouped in figure type, so for these guys I had a strip with 8 marching figures, one with the command figures on and a final smaller strip with 4 Grenadier figures. I then prime the figures with the trusty Halfords Matt Black Primer whilst they are stuck to the strips. I find the use of dowling speeds up the painting, it minimises handling of the figures, also allowing them to be held at an angle so that paint can be applied to all of the figures at exactly the same angle. As usual paints are Vallejo unless stated otherwise, all figures are shown front and back and described right to left in the top photo.

So the first set of two pics starts with the primed figure, then a coat of Citadel Foundation Mechrite Red as the base coat on the jacket followed by a highlight of Citadel Colour Blood Red as a highlight. 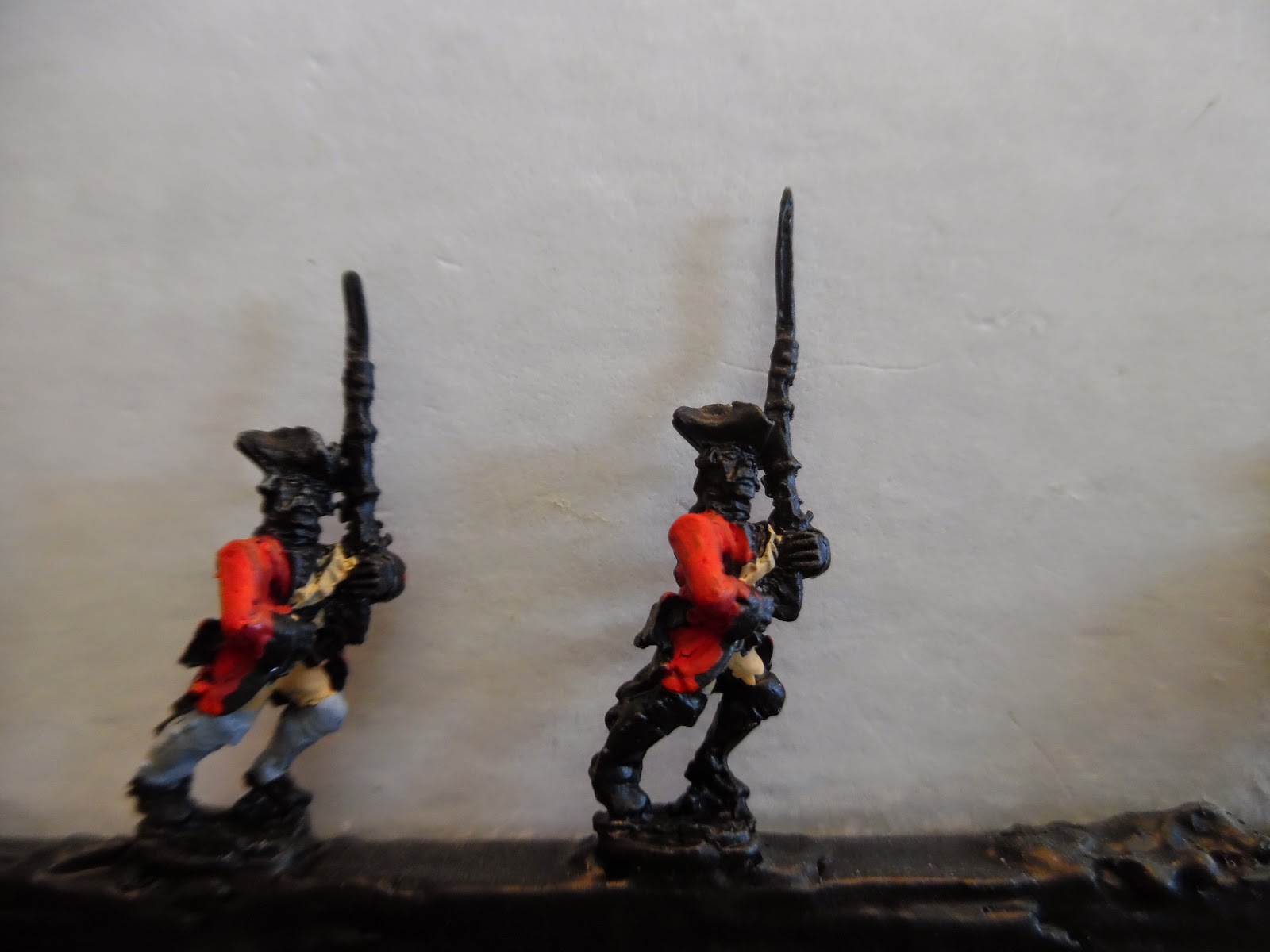 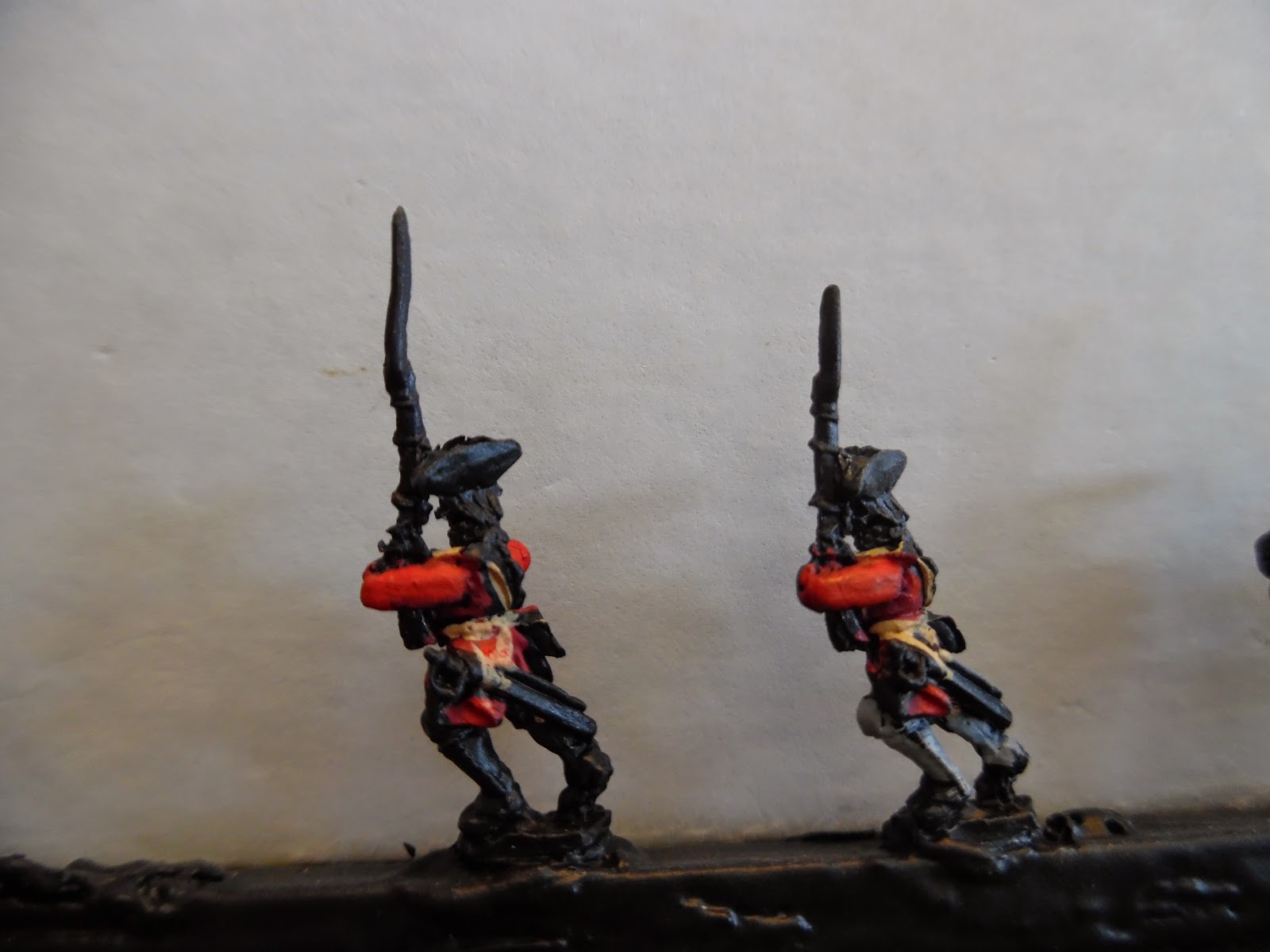 Next stage is 70912 Tan Yellow with which I have done the belts and the breeches. Stage two on these photos is a coat of 70990 Light Grey covering the gaiters. 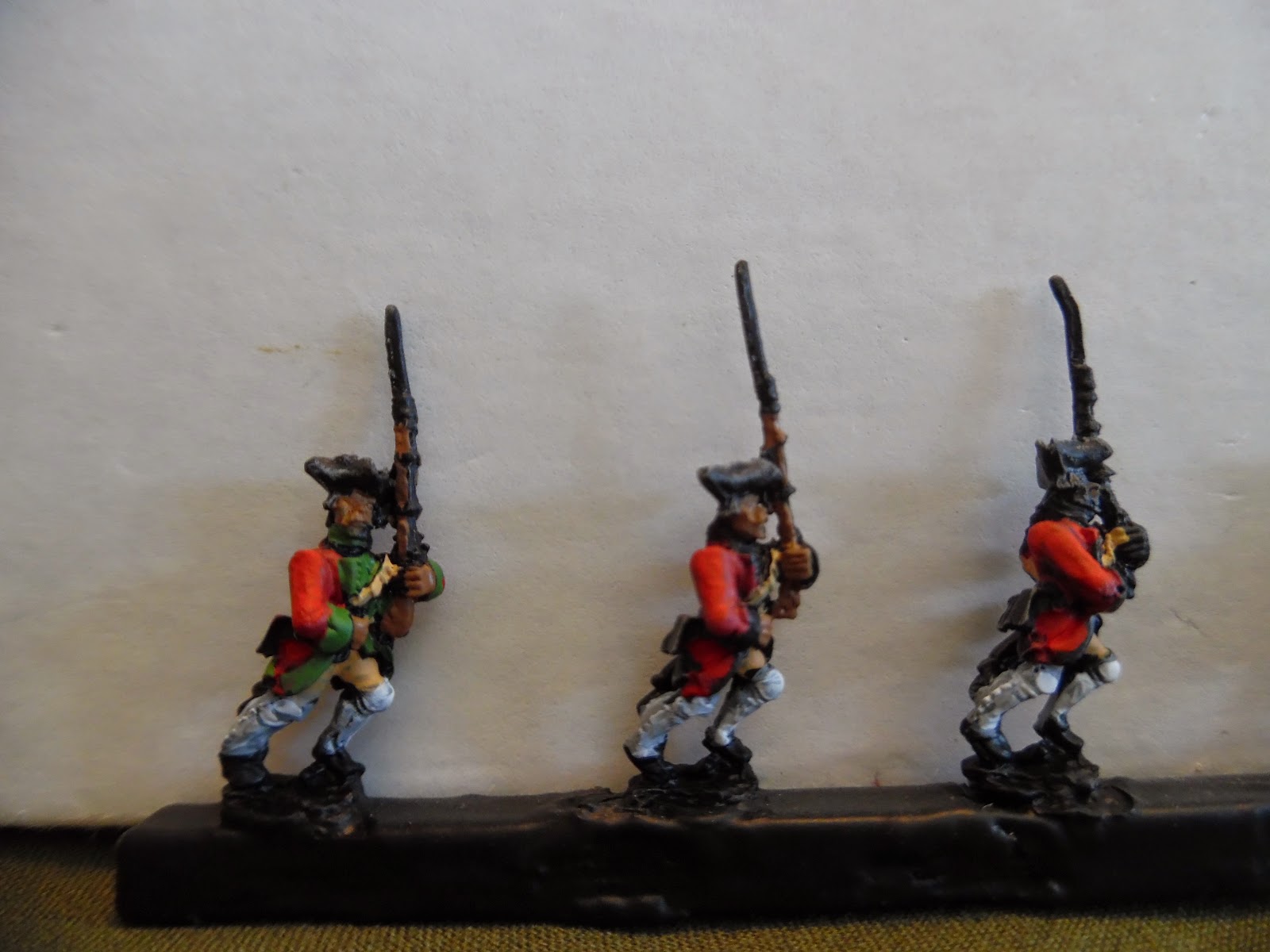 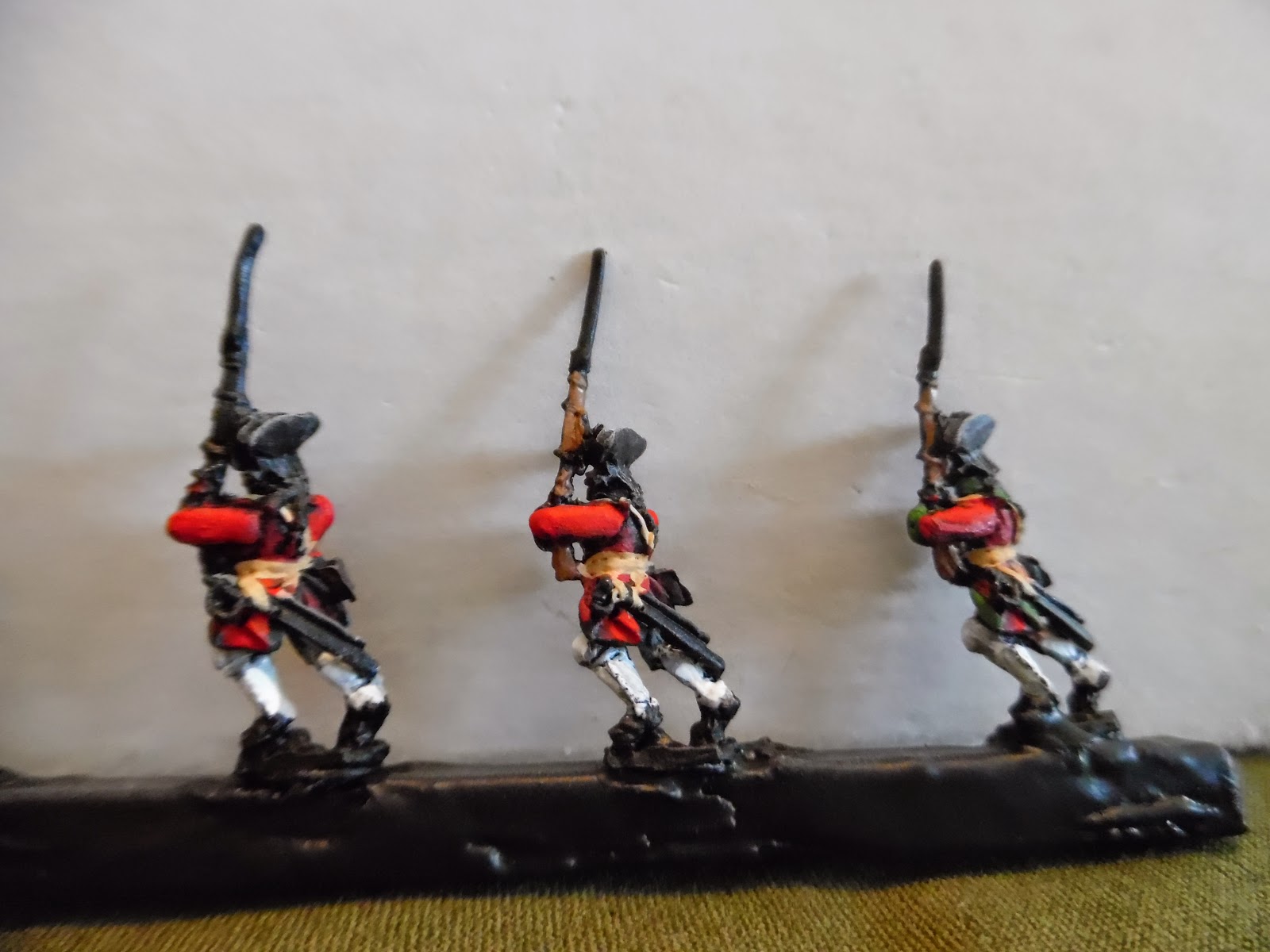 Three stages on these photos, 1st is a highlight of 70951 White on the Gaiters, then I have used 70875 Beige Brown to cover the musket and the hands and face finally on this set I have added the facings which for this battalion was 70823 Luftwaffe Cam Green. 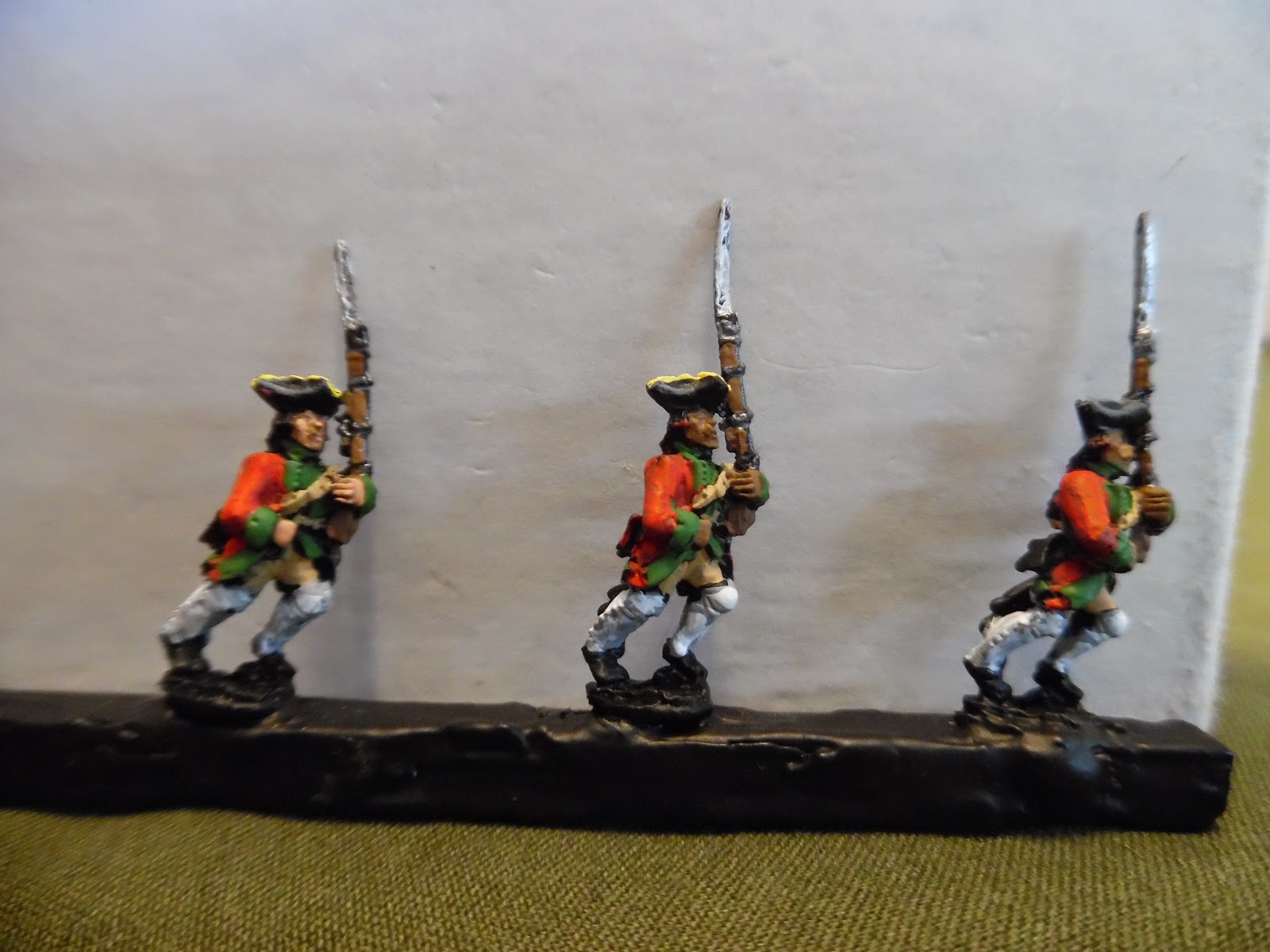 I have painted the bayonet with Citadel Colour Mithril Silver and then the sword hilt and musket fixtures in 70863 Gunmetal Grey, next up the lacing on the hat using 70915 Deep Yellow, I have then painted detail on the face and hands with 70804 Beige Red. 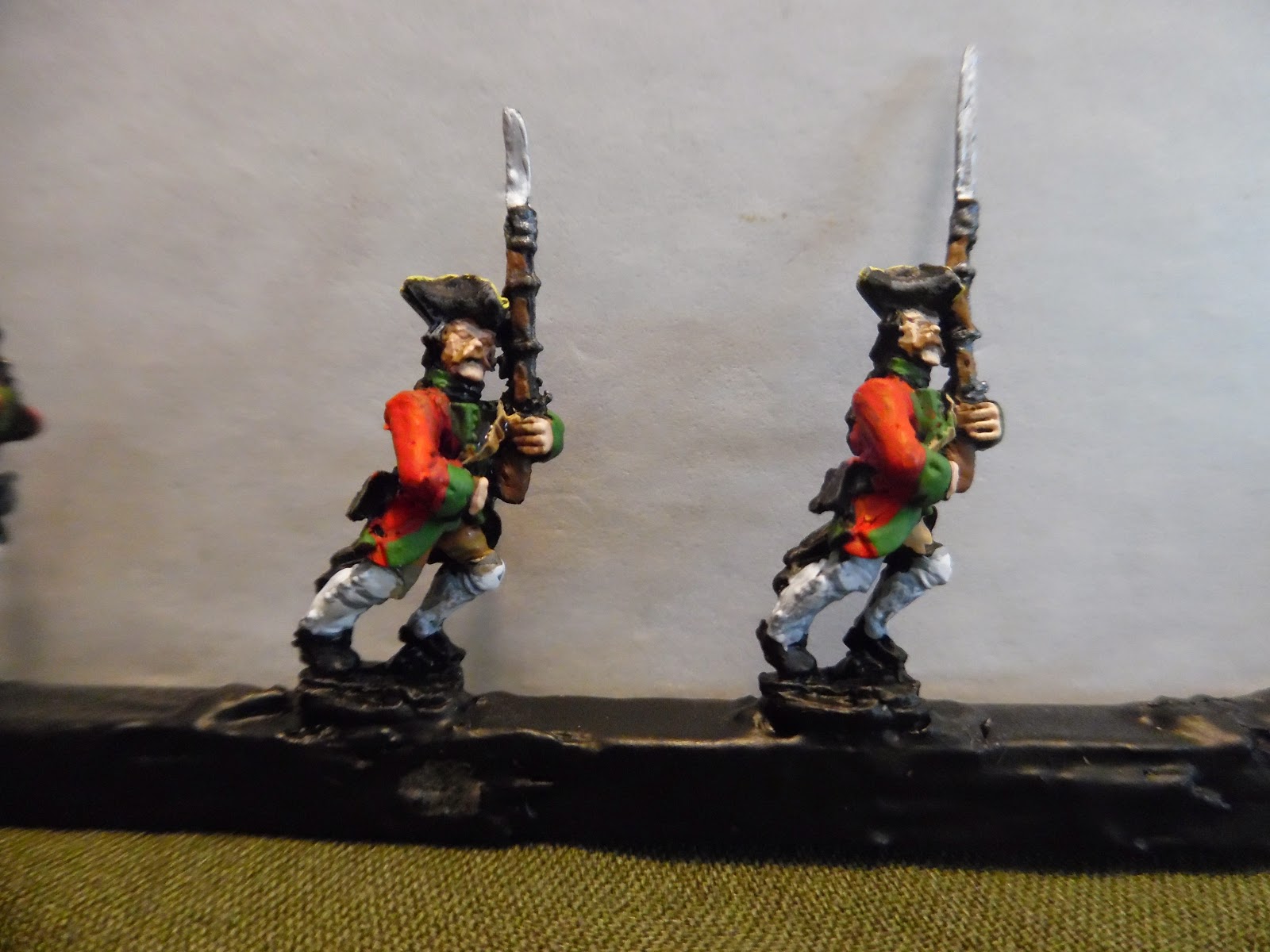 On the right I have added a highlight to the flesh with 70815 Basic Fleshtone and finished the figure off with a wash of Devlan Mud Citadel Wash on the musket, breeches, belts and chest area. A final slop of Ogryn Flesh on the face and hands and job done. You could start highlighting the facings and adding extra lace etc but these are wargames figures done to a good standard for my table. Pendants will notice a couple of the battalions have officers with red sashes rather than yellow, I'll get round to correcting it eventually. 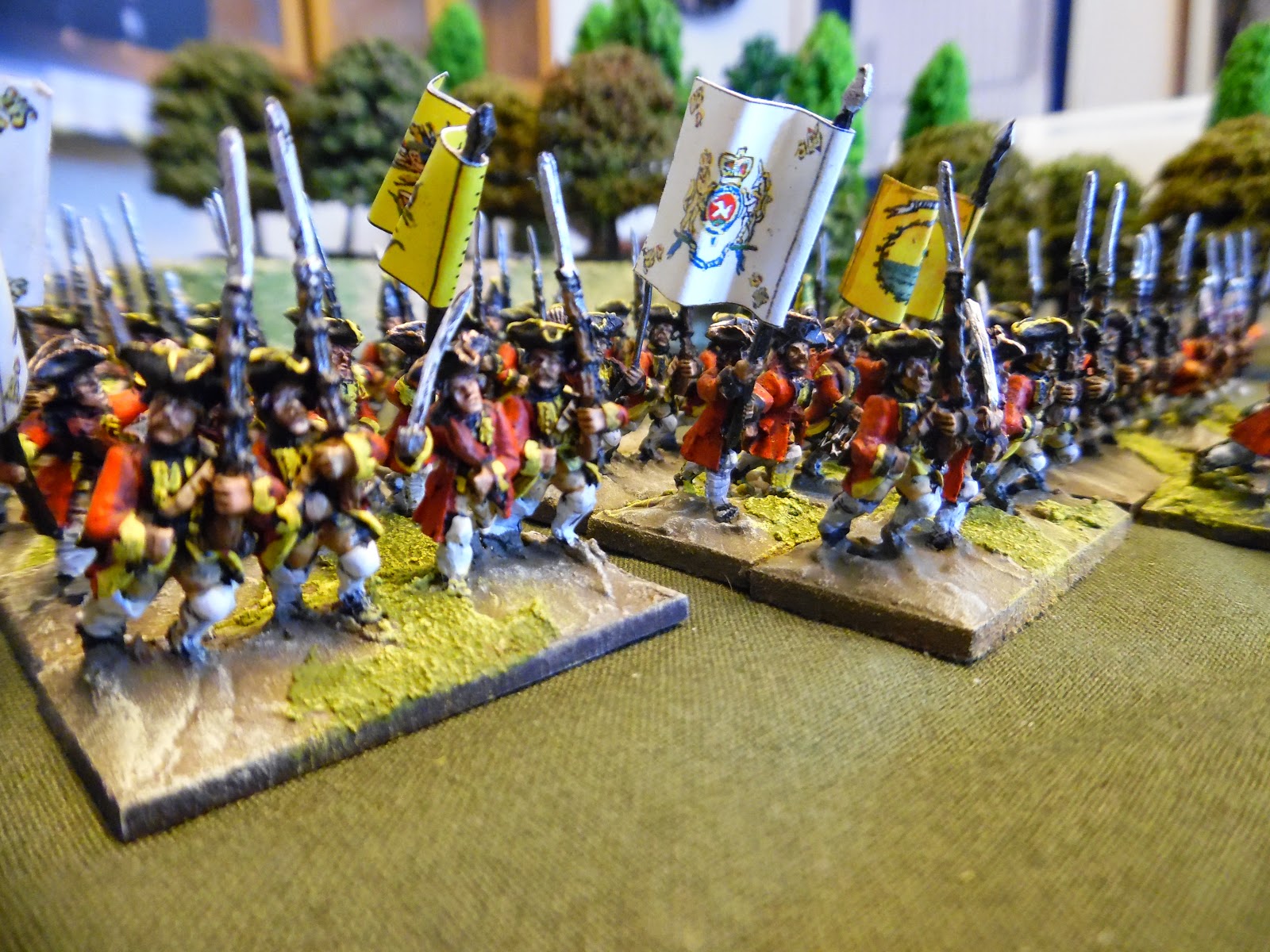 So there we have it 80 figs done, my usual basing method with MDF, plaster, basetex and paint, see other Box to Table posts for the method. The flags are from Old Glory and have been lying around in a box for years, not as good as the stuff you can buy at the moment for for the early 90s they were the dogs. Thanks again for watching From Box to Table join us again next time.
Posted by Yarkshire Gamer at 09:54:00