Over the last few game sessions at Castle R we have been getting the current main project, WW2 Desert in 28mm on the table. The painting of the figures has been the subject of a number of blog entries. This started off as a "skirmish" game, a box of Perry figs and a couple of vehicles a side, a quick look at the painting count on the right of this post (over 450 since last year at the time of writing this post) will show how its got out of hand, we have done lots of play testing of the rules over short "club night" games of 2-3 hours and got them sorted in that format. This was the first dip into a bigger game form, I knew we would need a few changes to them for the larger number of units.

The scenario was my standard rules breaker game, running down the length of the table both sides move on table on a single road through a small village, the objective being a central village. Lots of hills and scrub spread round the table (you don't want to be caught in the open in WW2) to hide behind. Both sides start with a company of infantry plus supports and a two vehicle recon unit. The Italians had an Autoblinda AB41 armoured car, a CV38 armed with an 20mm AT rifle, a rifle section of 11 figs, a Mg section of 9 figs, a HQ with 45mm Mortar and AT Rifle plus a 10 fig Bersaglieri section. The Brits had a recon unit of a Marmon Herrington AC and a Mark VI Light tank plus a company of Desert Rats, 3 10 fig sections plus light mortar and A/T.

The rules we use are basically the same set we use for Spanish Civil War, loosely based on Seven Coffins for Seven Brothers with bit of Toofatlardies. We use a card driven activation described in detail in earlier SCW blogs. For that period we have a money element to the game which enables players to buy upgrades and more stuff. I was looking for a mechanic to set the WW2 game apart from the SCW game and one early morning, not being able to sleep due to shifts I was watching TV poker when inspiration struck

It works like this, at the start of each turn the deck of unit cards is shuffled and each side is dealt two cards, 5 cards are then put face up on the table, the flop. Both sides now roll 2d6 to determine who has initiative, the highest score gains it and holds the initiative on a score 2 less than the winning roll. So a player winning with a 10 holds the initiative on an 8. Once initiative has been won the turn begins and cards are activated in order from left to right, that unit moves and or shoots and then the next card activates, standard stuff.

The player with the initiative is in control of the flop, he can choose to let it run, allowing the cards to activate in turn. Or he can take one of a number of actions, he can exchange the position of two of the cards in the flop, so above if the Italian player had the initiative he may want to exchange the Sicilia card for the Allied Recon so that that unit activates first. Another action is to take a card from their hand and place that anywhere in the flop, a particularly evil move if you have the Tea Break card.

Finally a player can draw a card from the unused deck, once the effects of the card played moved or drawn have been finished (so in the example above, after the Italian Infantry had moved and or fired) the player has to roll to keep initiative, 2d6 greater than or equal to the current initiative score (8 in the example above). Pass the roll and the player keeps the initiative and adds 1 to the initiative score, fail and the initiative passes to the other player, who then takes command of the flop. Each player has a maximum of one action per flop. After all the cards on the table have been used another 5 cards are dealt as new flop.

When the turn ends on the tea break card a new turn begins and initiative is rolled for again. The system has produced some interesting game play, win the initiative on a 4 and off you go like Rommel on speed, win it on a 10 and you're a bit more cautious ! 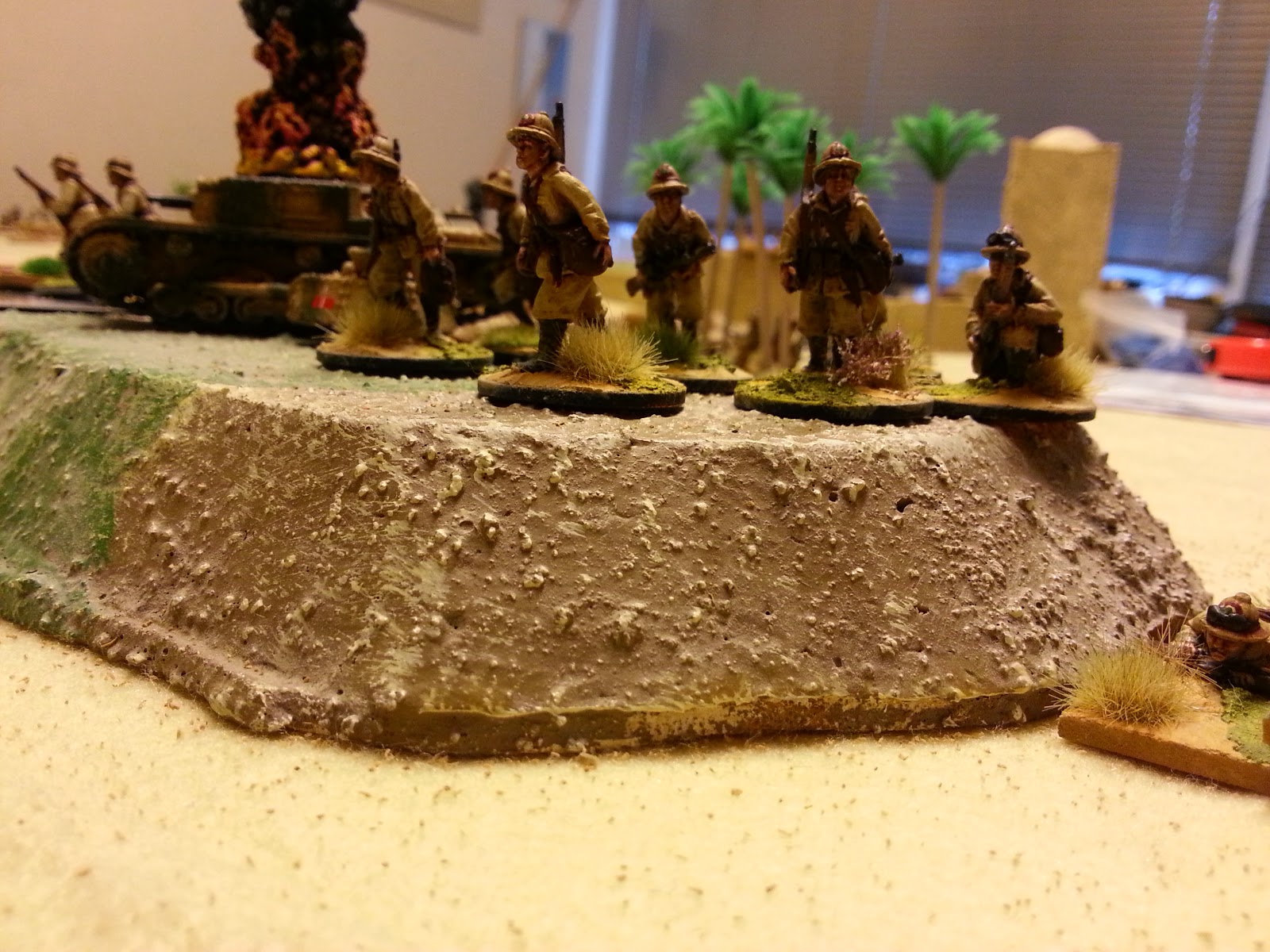 We managed 2 games, both predictably wins for the Brits. The first game was over quite quickly, poor re enforcement rolls for the Italians and excellent for the Brits gave them an unbeatable numerical advantage in armour. The second game was more even to start with, the Italians briefly got a toe hold in the objective village, only to draw fire from every man and his dog, wiping them out to a man, everyone gave the village a wide berth after that !

The main body of rules work great in the big game setting, I want to try a couple of other things with the card activation to see if we can speed things up in that department. More units activating on one card is one possibility, the other would be to use a Johnny Reb type order chit method, both will get a run out before Xmas I hope. Weekend game tomorrow will see the dust blown off our ACW collection for a one day only battle. X Wing, SCW and Vietnam are cued up after that before we return to the Desert. Our regulars have purchased some Afrika Korp so the next game for the Brits might not be so straight forward.