I have had a while off the bloggosphere recently but the cogs here at Yarkshire Gamer have not stopped turning, by jiminy no. 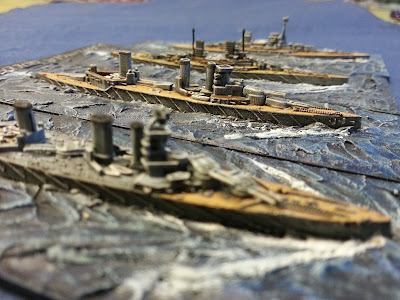 I have discussed the merits of the WTJ ships previously on this blog and if you are a regular reader you will know I am a fan. The latest batch of ships arrived recently and the order contained my first two capital ships from the firm, I did do a basing tutorial a while back but with these wonderful new ships I thought I would do a new up to date tutorial. Paints are Vallejo unless otherwise stated.

The two ships we have here are HMS Queen Mary which was a slightly modified Lion Class Battlecruiser, a ship not made by GHQ and SMS Hindenberg the last of the Derfflinger Class again a WTJ only release.

If you like the look of the WTJ stuff they are available from HERE and no I'm not on commission ! 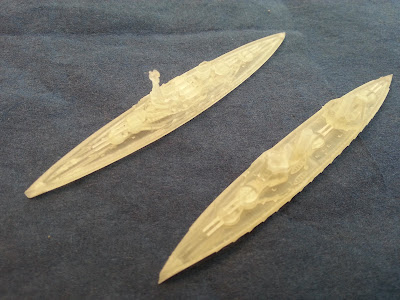 In their basic form the WTJ ships look like some form of Alien off spring, you can't really see the detail at this stage but this is of course straight out of the box. 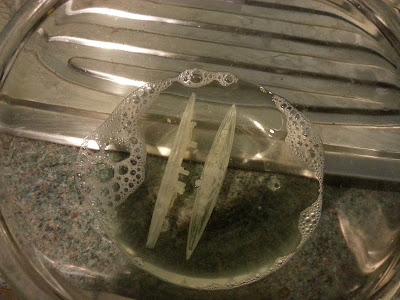 Stage one with these ships is a good soak in soapy water, this cleans any contaminants from the surface of the ship. Its probably the most important step too as an unwashed ship can mean paint flaking at later stages and that would be heartbreaking. 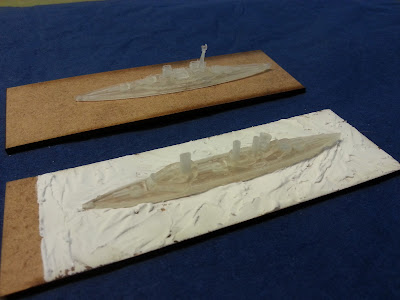 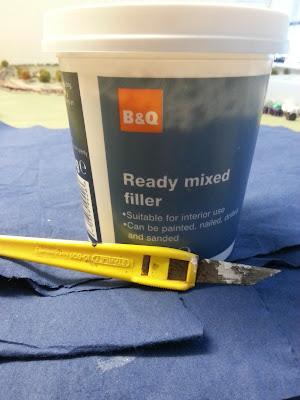 Once our models have been thoroughly dried its time to crack on, firstly I fix the ship to its base. I use MDF bases from ERM, for Capital ships they are 120 x 40 mm which is the correct size for my WW1 Naval Rules which I promise one day I will get round to putting on the blog.

Once fixed I use a pre mixed DIY filler and a scalpel to sculpt some textured sea around the ship. I leave a small flat tab at the bottom of the base. 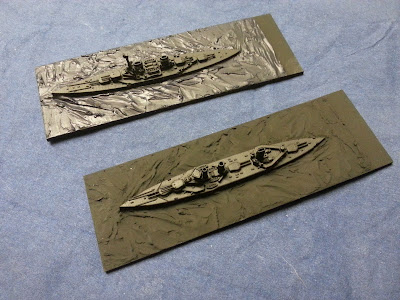 Once dry the ship is undercoated using a Matt Black Primer, I use one from Halfords which for none UK residents is a Car Parts Store. I then paint the sea area with Miniature Paints No 24, Navy Blue. 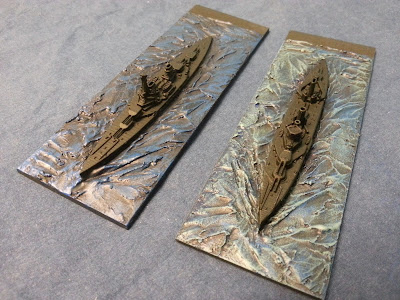 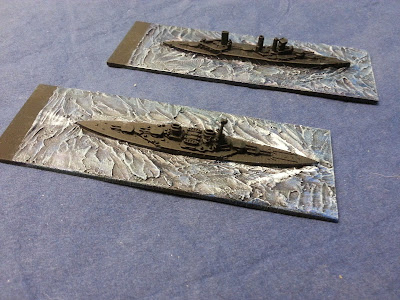 The bases are finished off with a light all over dry brush of 820 Off White just to pick out the wave tops, next up I paint in, using the same colour the Bow and Prop wakes. 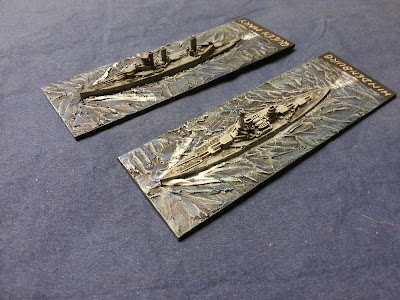 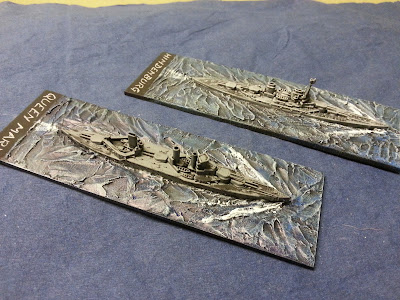 That's the sea done so its time to start on the ships themselves, I use 992 Neutral Grey applied along the belt and all over the superstructure as shown by Queen Mary, I then drybrush the whole of the ship with 990 Light Grey, I also use this colour to hand paint the ship name on the flat tab at the rear of the base. I have moved over to Light Grey from White for the name, I prefer the more subtle look of the Lt Grey. 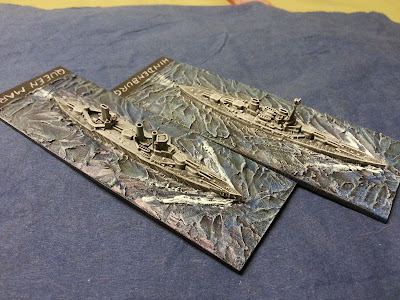 Next up are two progressively lighter drybrushes both in terms of the colour, 883 Silver Grey first and then 820 Off White, but also in amount of paint applied. The effect between the two colours is quite subtle but I feel that its worth it on these larger ship models. 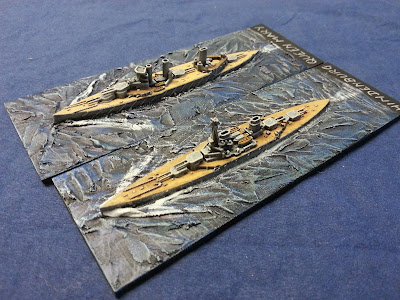 The most difficult stage is next, painting the decks, you need to be careful not to cover up the detail on the decks or to let the paint overflow down the side of the ships. I have used 912 Tan Yellow for the deck, Hindenberg has had its decks washed with Army Painters Strong Tone to give it some depth. 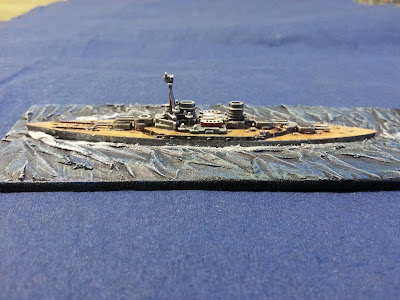 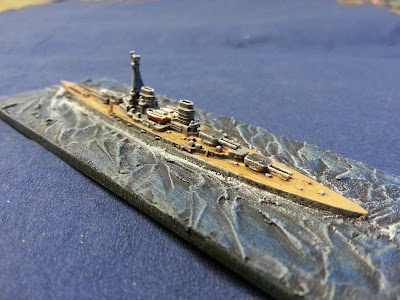 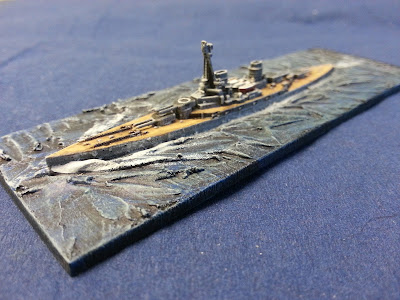 I then take each ship and do some individual detailing to finish them off. Hindenburg has had her turret tops painted black and then toned down with a light dry brush of neutral grey. I have also added the turret ring with a base of Light Grey over painted with Off White. A fine application of Army Painters Dark Tone has been applied on the casemates and funnels just to bring out the detail. The lifeboats have been painted in their natural colours. For a final touch I have painted the anchor chains with Citadel Tin Bitz and highlighted with 863 Gun metal grey. 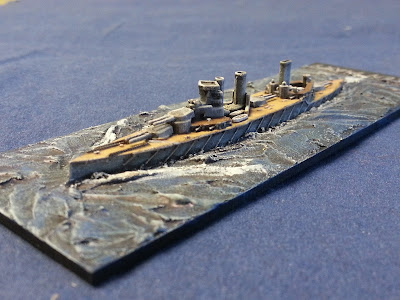 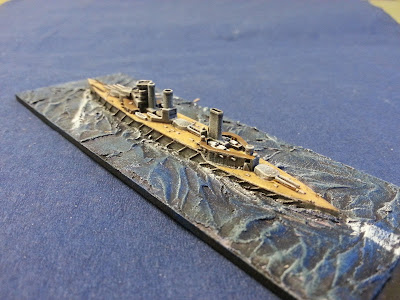 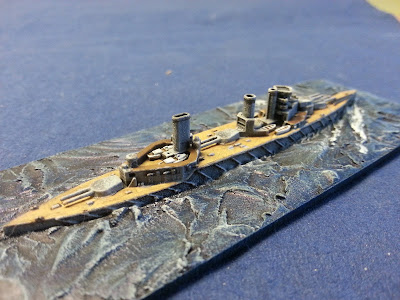 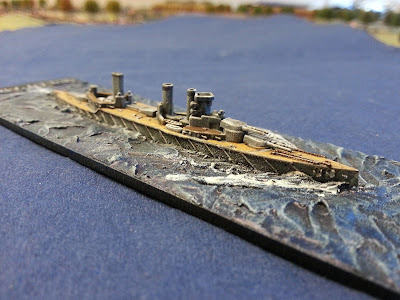 The same treatment has been given to Queen Mary, I have darkened her upper decks with 875 Beige Brown and used slightly more of the Dark Tone on her, mostly due to the torpedo nets. 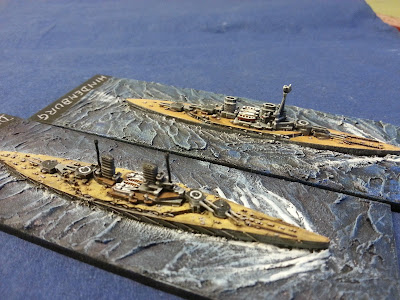 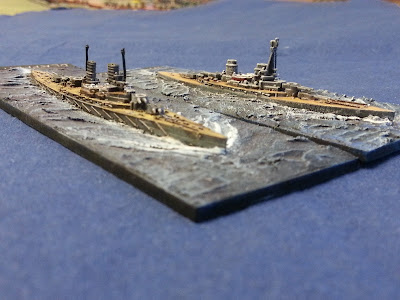 It would be wrong of me not to put up a comparison shot with the GHQ version, they are slightly different ships but it gives you an idea. 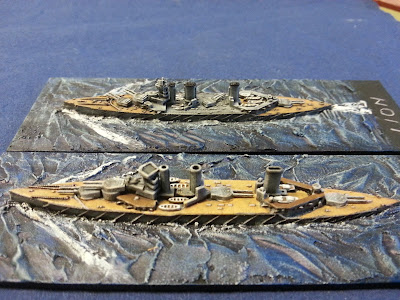 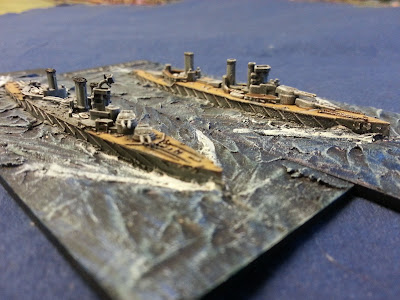 And the same for the Queen Mary up against a GHQ Lion. 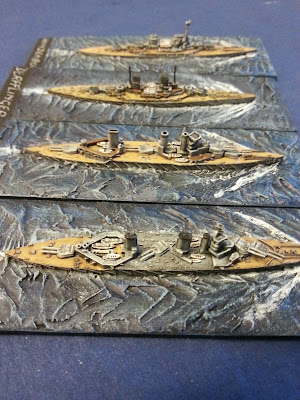 Just for the hell of it, all four ships together.

Email ThisBlogThis!Share to TwitterShare to FacebookShare to Pinterest
Labels: 1/2400 WW1 Naval, From Box to Table