For those who don't know, this is a continuation of the X Wing Campaign, full explanation and details of Campaign rules are here. 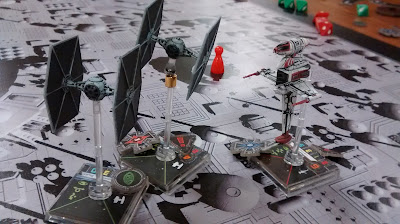 We have received a message from one of the last surviving Bothan spies, he claims to be aboard a new "giant" space station, under construction near the Portant Sector.

His last message via a sub space transmission claims that the station will be capable of destroying an entire planet when complete.

You must get in and scan the surface for the spy, once located protect the rescue ship which will arrive for him.

On discovery of the spy 1 x YT 2400 (random pilot, we had Leebo PS5) with Mangler Cannon, Weapons Engineer and Ion Pulse Missiles. 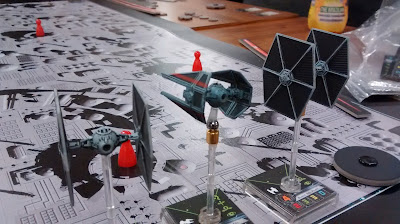 All empire ships set up within range one of their table edge.

When the spy is located the Empire player receives 3 rolls on his re-enforcement chart, we got

Set Up (played on the Space Station Mat) 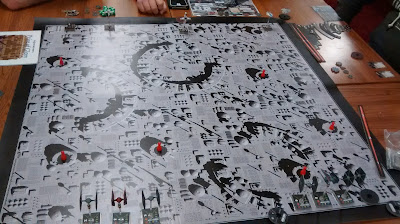 Rebel players set up on the top of the map within range 1 of the table edge.

Game lasts until the spy is saved or dies. 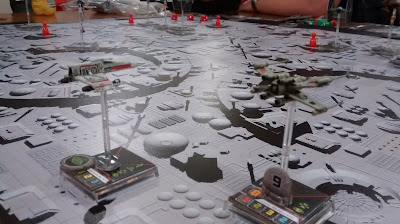 Spy Locations - Rebel players must use an Action to scan each potential Spy Location, the ship must be in within range 1 to perform the action. When scanned the scanning player rolls 1d6 and locates the spy on a 6. The meeple is then removed from play. The next scan is done at a minus 1 on the roll and so on until the spy is located.

YT2400 - Arrives anywhere on the Rebel table edge on the turn after the Spy is located. To pick the spy up takes one action, the ship must be within range one of the spy to conduct the pick up.

On the turn of the pick up the ship will receive one point of damage per distance moved, so a 3 bank left will lead to 3 damage whilst a one straight forward would just give 1 damage.

Rebel Exit - For this game only Rebel ships may exit the game by flying off their table edge. 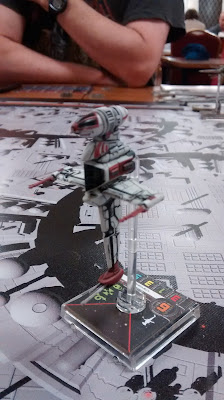 A night of evil luck for the Empire, with the ships and pilots at their disposal this game should have been fairly straight forward but no. Every single crit card for the Empire was the Tie killer, 2 hull damage.

Soontir Fel fell victim to the curse of the high skill pilot, getting blocked and suffered badly as a result getting shot down straight away. The Tie Fighters did there usual impression of a Catherine Wheel (flying round and round at high speed before exploding).

The spy was located on the third scan with only two Imperial ships left on the table, a decent set of reinforcements was rolled, a Defender, a Shuttle and a Bomber. The latter with good pilots, sadly the Defender was a PS 1.

Its the first time we have used a YT2400 and I was quite surprised how fast and manoeuvrable it was. Its also quite resilient. All the Imperial ships concentrated on the rescue and it was to prove a close run thing yet again.

The key was the Tie Bomber, with its missile load out it was capable of taking out the YT2400 at distance, sadly it wandered too far forward, got blocked by a lower pilot skill ship and the rest is history.

The Rescue ship was down to two hull points when it escaped, of the remaining Empire ships the Shuttle couldn't turn quick enough to get back into a shooting position and the defender was too far away. The YT sailed off the board edge with the spy and the game was over. A win for the Rebels after a recent run of draws and Empire wins it helped the Rebels increase their campaign lead.

Pop Cicle was shot down in his A Wing, its a great quick little ship but has proved to be a little fragile in a campaign situation.

Another kill fest for the Rebels as they downed 7 Imperial Ships, Tie Fighters, more like Die Fighters. 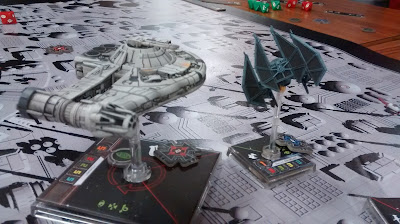 X Wing madness will return with game 21 on the 9th of December. A mission which will see or intrepid band patrolling an as yet uncharted area of space in support of a fellow Rebel Squadron. 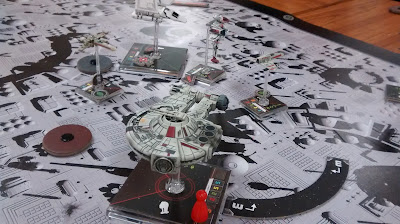 Jim head mechanic in the Rebel Garage has a new A Wing to prep, he has also had to invest in a new Haynes manual for the K6/B Wing.

Pilot upgrades prior to start of game 20 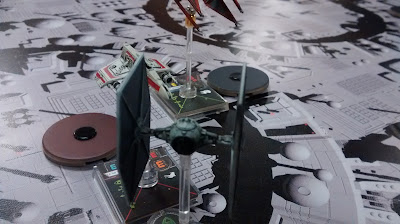