The "Not" Jutland Ship Collection 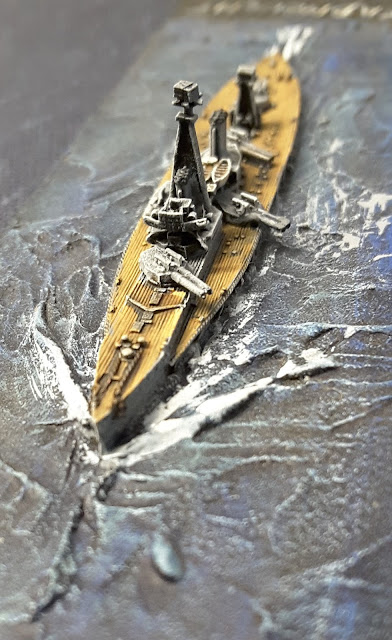 Some people have drug or alcohol addictions I have model ships ! Not satisfied with all the ships at Jutland (250 for the uneducated) I could only stand withdrawal symptoms for so long before embarking on the lesser "Not" at Jutland collection.

All ships are 1/2400 scale GHQ and a handy guide on how I paint them is avaliable on the link below.

So let's have a run down of the new ships starting with Team Britain. 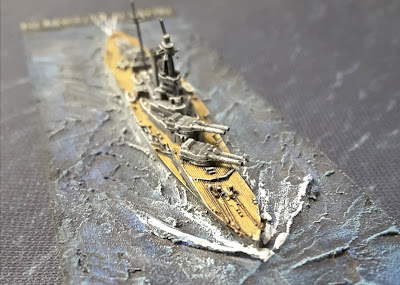 The lead ship of a class of Super Dreadnoughts, 3 knots faster than the standard 21 knot Dreadnought, she and her sisters were designed to form a Fast Squadron. With 8 15" guns and 13" armour QE was a formidable force. 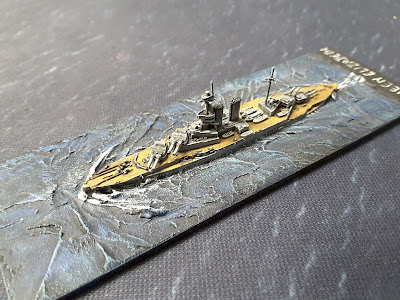 Whilst undergoing trials in the Mediterranean she was called up for the Dardanelles Campaign where she served as a flag ship. After that ill fated action QE returned to the Grand Fleet at Scapa, however she missed the big day as the ship was in dock for maintenance. 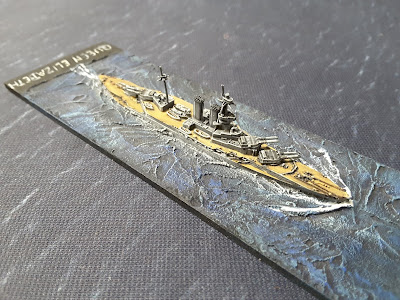 Later in the 1st World War QE became the flagship of the Grand Fleet and went on to see extensive service in WW2, being badly damaged at Alexandria by Italian Frogmen. 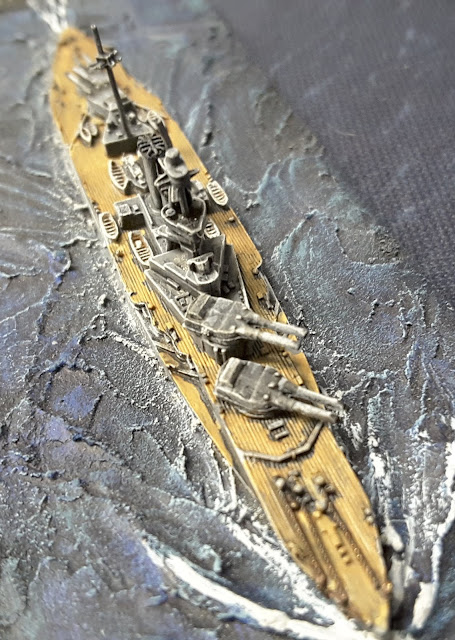 The ship that started a revolution in Naval Warfare, launched in 1906 she was the first Ship to have a single calibre main armament (12" guns) and steam turbine engines which gave a top speed of 21 knots. Both of which made the existing Battleships or the now Pre Dreadnoughts, obsolete.

Despite the fanfare of Dreadnoughts launch her active career was less auspicious. The ship rammed and sank a U Boat in 1915 but missed Jutland whilst in dock being refitted. After that there was a stint in the home fleet before being scrapped in 1921. 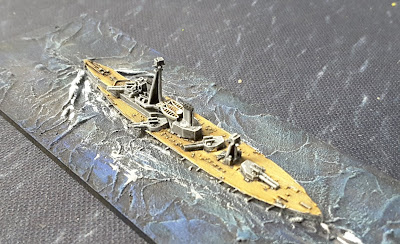 One of three Indefatigable Class Battlecruisers and the only Capital ship in the Australian Navy, she began the war searching for the German East India Squadron before being transferred to the North Sea. 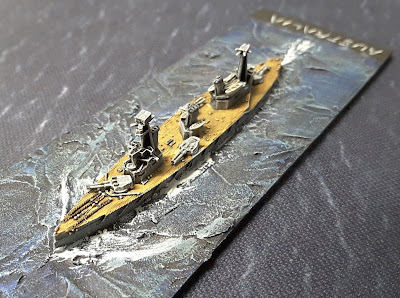 Australia missed Jutland as she was in dock for repair following a collision with her sister ship New Zealand. The Battlecruiser returned to Australia after the war but was scuttled as a result of the Washington Naval Treaty. 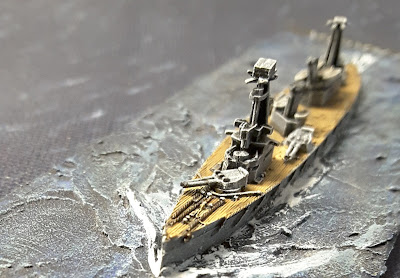 A strange beast, the second of three Courageous Class Battlecruisers, armed with 4 15" guns, with a top speed of 32 knots but very thin armour (3" belt). 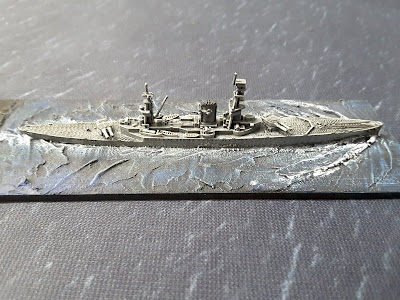 One thing immediately obvious is the decks, rather than the standard teak decking of the time this class of ship had bare metal decks to save weight and therefore increase speed. 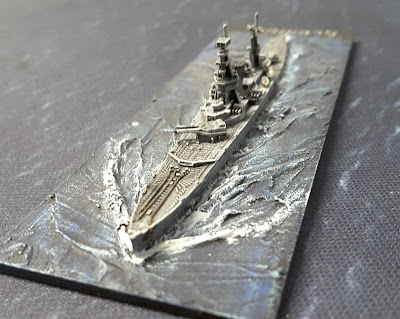 The ship took part in the second Battle of Heligoland Bight but after the war she was converted into an aircraft carrier, the model itself is huge and only just fits on the 120mm base.

The next two ships fall firmly in the "why and when did I buy that" category. 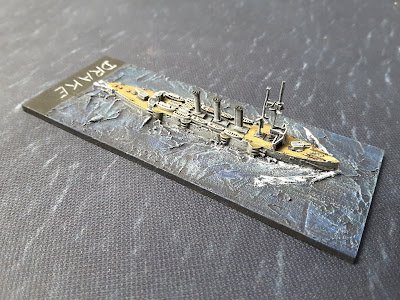 When going through the "to do" box I found this Drake Class Armoured Cruiser but for the life of me I can't figure out where it came from. Coronel I hear you call, but alas no; I already own HMS Good Hope. 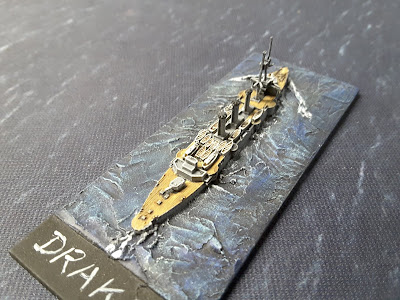 But never mind whilst the ship yards are open...... painted up as the lead ship of the Class it adds to my Armoured Cruiser collection. Before WW1 she was stationed in Australia before returning to the UK to be part of the 7th Cruiser Sqn. She was torpedoed in shallow water in 1917. 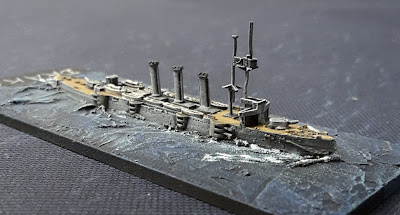 I love the detail on this ship, a hint of black wash in the recesses works nicely.

Lying in the box next to Drake was a Monmouth Class Armoured Cruiser, clearly there has been some sort of Coronel mix up going on as the Class name of that group, famously lost in the South Atlantic battle. 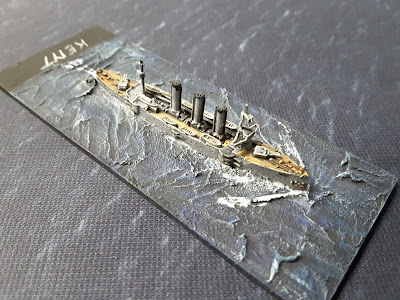 So rather than leave the model unpainted she has been finished and named HMS Kent. 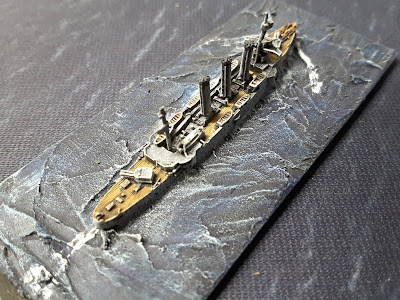 Kent was refitting at the start of the war and spent time in the South Atlantic after Coronel playing a part in sinking the German Light Cruisers Nurnberg (Falklands) and Dresden. She was on the West African coast at the time of Jutland. 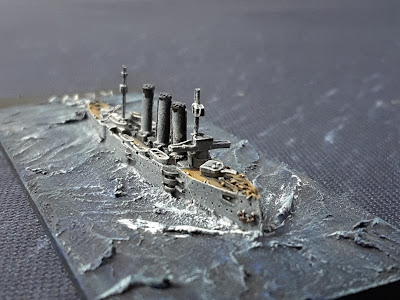 That concludes the new additions to Team GB, all I have planned to add are Repulse, Renown, Furious and the mysteriously missing HMS Audacious which I am sure I bought but can't find ! 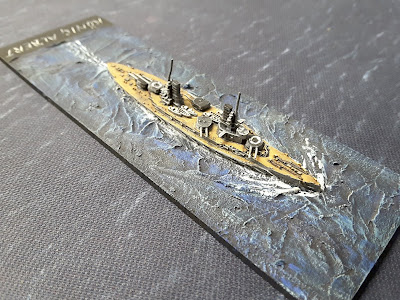 The fourth ship of the Kaiser Class Dreadnoughts she was in dry dock for maintenance at the time of Jutland, a big miss for the High Seas Fleet. 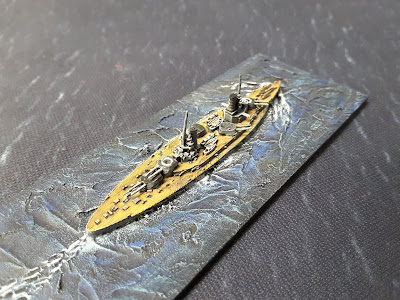 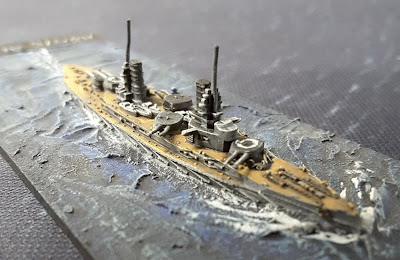 I previewed this ship a couple of weeks back, I had been suffering a spot of Painters Block after the rush of the Italian Wars Project but finally managed to drag myself forward and get this model finished to hopefully get the Vallejo flowing again. 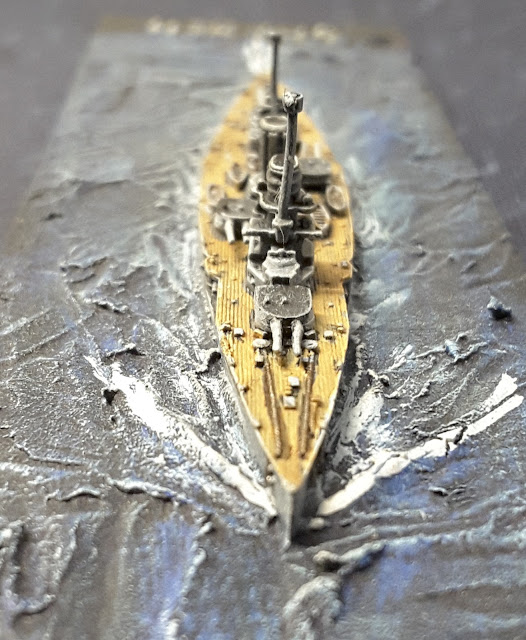 Another lovely GHQ model. Goeben was in the Mediterranean at the start of the war and was transferred to Turkey. Our Naval Campaign has historically taken a different route and the ship has been recalled to the 1st Scouting Group, hence the need for the ship. 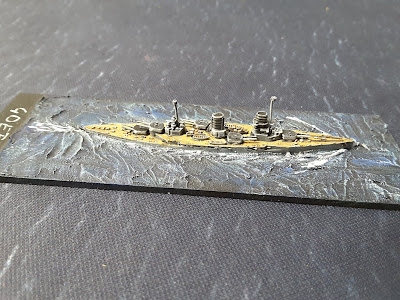 It's going to be great seeing her go into action alongside her sister Moltke. The German Capital Ships are all done now and I have some early Pre Dreadnoughts and Armoured Cruisers on the go (from Tumbling Dice) so look out for a review on those soon.

Out of interest I took a picture is Queen Elizabeth next to Dreadnought, it's amazing to see the two ships side by side in the same scale, Dreadnought as we know was a revolution but look how far things moved between 1906 and 1914. The sheer size of QE paints a real picture. 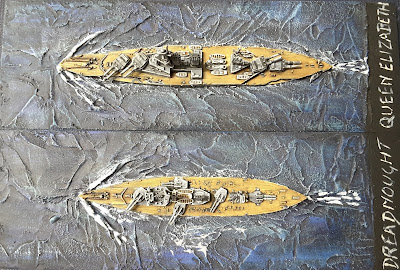