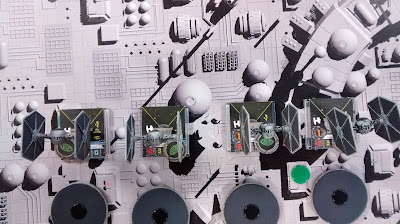 "Gentlemen, today we fly in support of a major fleet action with a special mission.

Using the cover of the general mayhem of the main battle we need to to sneak in close to an Imperial Droid Fighter Carrier. The firepower of that ship will be being directed elsewhere and we hope they wont notice your small squadron sneak through.

Your ships have been equipped with specialised R2 units, drop them on the surface of the carrier, then guide them to a network port and download a virus onto their system whilst uploading important data about the carrier.

Once you've retrieved your R2 get out of there, expect some attention from the Droid Fighters who will defend their mother ship."


Rebel players set up on the top edge of the map.

Empire Set up is 2 Tie Droids per Rebel Player, PS is random from the Squadron Pilots (1,3 or 4) drawn at random from available cards. No random ships.

Place 6 markers on the table as shown to represent the data ports on the carrier deck.

R2 units - Each Rebel ship carries an R2 unit externally, it can only drop the units onto the surface of the carrier in the final (Imperial) third of the map. It takes an action to drop the unit. Once on the surface the unit moves with a PS 0. The unit can move any 1 template or a straight 2. When it reaches a data point roll 1d6, on a 4,5 or 6 (if it fails try again next turn) the unit connects and spends the next turn up/downloading data. The unit then needs to be picked up and hyperspaced outta there ! (No you cant shot at them you evil Empire player, you).

1) Not effected by Stress, they never earn a stress token, so can red manoeuvre for free.
2) Droid pilots are immune to critical pilot hits just take the hit.
3) Droid fighters are fragile, they explode due to feedback on any Hull Critical regardless of the number of hull points left.

2 new Droid Fighters should appear at random for every three that are lost.

Rebel Victory -  Download more than half the R2 units, victory points are only given to those who successfully escape with a droid full of data.
Imperial Victory - Less than half of the R2 units are downloaded.
Draw - Any other result.

Sickness and shift work had thinned the ranks this evening and only four pilots took on the "might" of the empire this evening.

With individual victory conditions the Rebel players stumbled in the light of the glitter of personal glory and split up rather than adopting their usual tighter formation.

This led to tragedy early in the game as (queue solemn music, wailing and gnashing of teeth) Wayne Kerr was caught in the crossfire of 4 Tie Droids and shot down, he rolled the dice of death, a sharp intake of breath, A CRIT !!! R.I.P Wayne. Survivor of 7 (and a bit missions).

We allowed Chris to re-incarnate as Ensign Wayne Kerr Jnr, a son on a mission to avenge the death of his father, for a bit of a change he chose a HWK-290 which if he survived this game would automatically get him 7GC to upgrade with, however those GCs are hard to hold on with Tie Droids K turning around the place at will.

It was a week where rather than crashing into each other (apart from one notable comedy moment photographed above), asteroids and rolling hand full of blanks that the Empire actually had some decent dice. Tie Droids are a bit fragile (basically a standard Tie with the added ablity to blow up with a single crit hit). All the rebel ships had lost their shields towards the end of the game and only two R2 units got deployed before everyone jumped away.

WK Jnr survived (just) and with a succesful robot deployment has a few quid to trick out his Hawk, it will be interesting to see how this ship develops. Mostly ignored in a points / competition style game it could be quite useful in a campaign format

An honourable draw. As a scenario it would probably have worked better with more Rebels, as a campaign game it was a challenge for the Rebs.


Jim head mechanic in the Rebel Garage was busy down the local book shop looking for a Haynes Workshop Manual for a HWK-290. 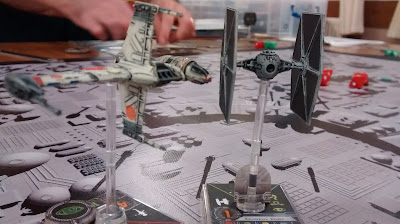