"Gentlemen, a tough mission for you today, grab you're four leaf clovers and buckle up for your 13th mission.

We have just received a short encoded message from the CR90 - Windbreaker who was on a supply run to our Sulphur Mining Facility in the neighbouring sector. Imperial troops have stowed on board and taken over the ship, our man on board has overheard the Stormtroopers plan, they are going to fly the Windbreaker into the mine destroying it and the Sulphur stored there.

The end of the message was garbled something about the Wind being out of control and the Stormtroopers swearing a lot.

Be careful out there you will be fighting in an asteroid field.

Get in there and stop that ship "

Rick O'Shea saved his dosh, happy in his B Wing.
Pop Cicle replaced is vapourised B Wing with an A Wing
Commander Wayne Kerr saved his cash too.
Crank Case took the typical cowardly rebel choice and got a shield upgrade
Captain Tangent bought a Munitions Fail safe but didn't fly.
Spike Sharpie chose to save his cash again and has been seen down the canteen with some new ship brochures. 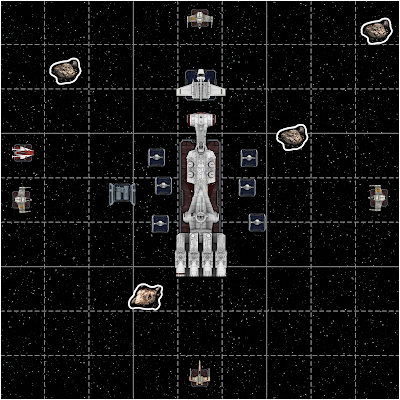 Empire Set up is based on the standard rules in the initial post, 6 TIEs in two squadrons, we had two PS1 Academy Pilots with PS5 Night Beast as Sqn Leader. The second Squadron had a PS 3 Obsidian Sqn Pilot, a PS1 Pilot with PS 8 Howlrunner as Sqn Leader (all chosen at random by Rebel players)

Empire random ships are rolled up on a table with the Pilots again selected at random, we ended up with a Lambda Shuttle with PS2 Pilot in the hot seat fitted out with Sensor Jammers, Anti Pursuit Lasers and a Weapons Engineer and a TIE Bomber with a PS7 Major Rhymer carrying a Proton Bomb and 2 each of Proton Torpedoes and Concussion Missiles.

Imperial ships start with the CR90 in the centre of the table, a sqn of Ties either side and then a random deployment for the specialised ship, roll 1 d4 for set up location, 1 at head, 2 on right, 3 at tail and 4 on left.

Same random set up for Rebs, each pilot rolls a d4 for set up and place their ship on that table edge.

Asteroids - Start with 4 on table, split the table into 9 x 9 squares (as the map) roll 2d10 ignore and re roll 10s for asteroid set up, move if on a ship base. 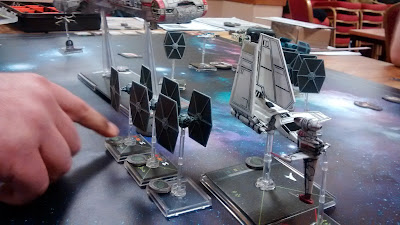 Asteroids - after all ships have moved roll 4 attack dice, any hits (not crits) generate a new asteroid, roll a d10 and place it on the edge of the table opposite the CR90s front in the rolled position (ignore 10s).

Then roll 1 d4 per asteroid on table, that then equals the asteroids move, they move from the top to the bottom in their lane and exit the table when they get to the bottom.

Ships may fire at asteroids, 2 hits in 1 turn destroys them (no carry over), 1 hit will move the asteroid away from the direction of fire into the next lane. Ships may roll 1 attack dice at a time and stop when the desired effect is achieved.

CR 90 Windbreaker - The ship doesn't move on the map, everything is determined to be moving relative to it (don't even think about the physics, it works game wise).

The CR90 is not under full Imperial control and the Stormtroopers have switched on the autopilot to "smooth" out the journey, all actions of the ship are random.

The ship starts with 2 energy and generates 3 energy per turn.

The CR90 isn't under full control and will act in a random manner.

Firing, CR90 will always fire if energy and a target is available. It will fire at Asteroids on a collision course with it first, then at the nearest (within range band), then highest PS.

Actions (Roll 1d6 if not possible use next) If hull damage that turn.

WARNING - If you play points based competitions your brain may struggle to cope with this.

This is the most random scenario we have attempted and the balance could swing wildly in both directions, it looks unwinnable from a Rebel point of view but with the usual die rolling and luck of the Empire it isn't. I had some PS2 X Wings on stand by to help the rebels if they got swamped but we didn't need them.

Turn 1 Spike Sharpie took out Howlrunner with one shot, then the next turn the Shuttle accidental flew off the table. It didn't get any better for the Empire.

Whilst the Imperial Pilots were busy flying off the table, into each other and asteroids the Rebels concentrated on the Aft section of the CR90 and soon crippled the aft section.

Night Beast excelled by flying into an asteroid and blowing up.

Thankfully the Rebels lost focus and started chasing lone Ties around the board instead of finishing off the CR90, with cumulative damage starting to take toll and not making any further headway on the mission objective the Rebels started to jump at the end of turn 4 and had all gone by turn 6. 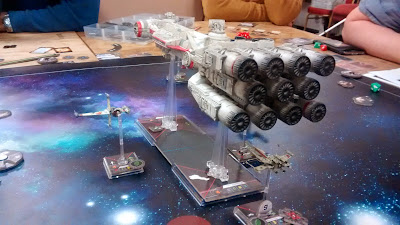 Jim head mechanic in the Rebel Garage has got his feet up with a brew watching Emmerdale.

X Wing madness will return with game 14 in June. 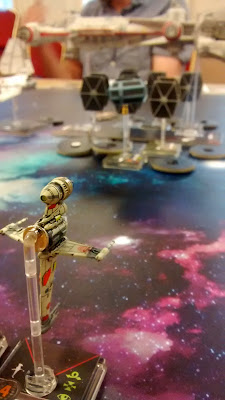