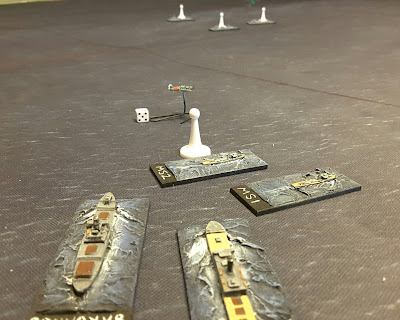 One of the yearly traditions here at Yarkshire Gamer along with the Xmas WW1 Mesopotamian game is the Naval Campaign, usually played around Easter Time it's always one of my favourite parts of the YG calendar.

Last year however with the madness of Project Jutland the Naval Campaign slipped out of the calendar as we had somewhat overdosed on the nautical aspect of the hobby. I had planned and half prepped a Baltic Naval Campaign set in late 1941 a while back and in anticipation I had built up 1/3000 (Our chosen WW2 Naval Scale) fleets for both the Soviet and German Forces.

So as 2017 rolled round it was the ideal time to brush off the blue cloths and get to sea again. The Campaign is played in a series of linked scenarios, which regular readers will know is my preference, I just can't be bothered with plotting individual search grids anymore.

So our intended area of interest is the Baltic Sea and I must give a big plug here for the Command at Sea PDF Baltic Arena which can be downloaded from the Wargames Vault for a fee, which even if you don't game is still a fantastic source of information on this neglected theatre of the war. This first scenario is very similar to one in the book.

The games would see our first ever use of both Submarines and Mines which proved to be very successful although they do require an umpire.

Historical Background of the Campaign

Our series of games, as the title suggests are set in the Baltic Sea area during the late summer and autumn of 1941. We will be exploring the entry of the German Navy into the area and it's subsequent operations up to and including the entry of the powerful Baltenflotte into the theatre in Sept of that year.

I have attempted to put together a historically realistic Campaign but as always my emphasis has been on playability and enjoyability so if you are a purist please bear that in mind as you read on.

Each game will be presented in the same format including player Briefings which should only be read by that side. 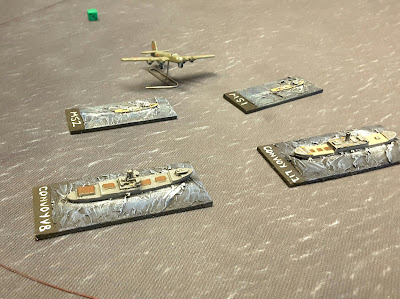 It's July 1941 and the German Land Forces are racing up the Baltic Coast, the capture of the port of Riga is complete but the advance has stalled just to the North of the city. The Kriegsmarine have been tasked with escorting some Naval transports into Riga whilst the Soviet Navy are out and about on general Naval Duties. 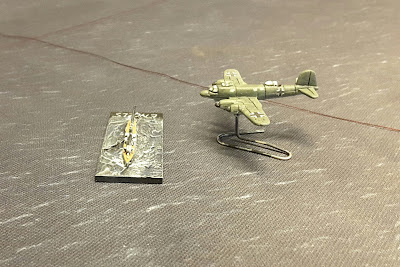 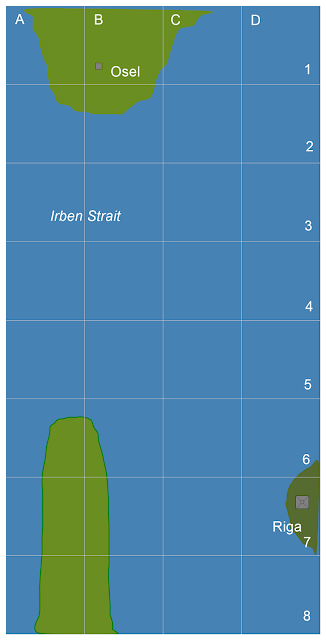 One of the great things about Naval gaming is that the set up is usually quite straight forward, its usually just a blue cloth however on this occasion we really pushed the boat out with some hills masquerading as land masses. For those of you who know the geography, the location of Riga is representative.

The use of submarines and mines meant that I needed to work out a method of griding off the table into sectors, a number of methods were dismissed (tailors chalk, counters etc) before I decided on running thread across the table and holding it place with pins. I did try a dark blue thread initially but couldn't see the damn thing so I went with a dark red for the contrast. Our table is 12 x 6 ft. 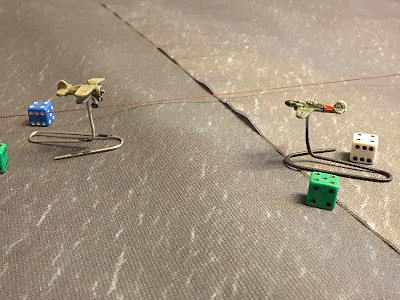 "Comrades, the glorious Land Forces of the Soviet are fighting bravely against the Fascist Pig Dogs, who dare to place their dirty paws on the hallowed ground of the party. So far the Glorious Soviet Navy have not had the pleasure of engaging the Nazi Lickspittle.

We continue to develop our military capabilities in the area awaiting the inevitable arrival of the Kriegsmarine, your forces enter the table in square D1,

1) The Destroyers Serdity and Silly  (7U Class) have been stripped down to carry mines, they have no torpedoes and mines cover the deck, superstructure and Torpedo Tubes. Proceed to location A2 where you must lay the mines (2 turns in a straight line at 16 knots max). You are under strict instructions NOT to engage the enemy until your mission is complete, a Commissar is on board to ensure compliance.

You have two submarines on patrol, inform the Umpire of their location before the game begins. You also have two areas of pre laid mines which you may place in rows B,C or D.

"Our superior forces continue to smash the weak Communist scum back to their Moscow slums, the time for Schnapps and Medals is here.

Powerful Naval Forces are rumoured to be arriving soon and in preparation we are escorting two Naval Transports full of supplies to Riga, just behind the front line.

We have two minesweeper ships under command (MS1 and MS2) to aid our progress as intelligence suggests that we are likely to encounter mines in the area.

The Destroyer Z-20 and two Torpedo Boats are escorting the force with orders to get the convoy through under all costs. All ships begin the game in square A7.

The Luftwaffe is hard at work on the Land Campaign but we may receive some support during the action."

For the submarines I used the GQ rules which are nice and straight forward, quite abstract but enough for a campaign game without  bogging it down into calculating depths etc. There is a free flow chart HERE on the Naval Wargames Society site to download, I counted each square on the table as an operational area for a sub, it remained in its square for the duration of the game.

In the Baltic Arena book mentioned above, there is some spectacularly complex details on mines and their use in the theatre. I decided to opt for a simple method.

Only Mine Sweepers can detect mines (other ships can by exploding one of course) Each ship which moves in a mined square must roll a d100 to see if it sets a mine off, 20% chance for a Capital ship, 15 for a Heavy Cruiser, 10 for a Merchant or Light Cruiser and 5 for a Destroyer. Each turn a MS spends in the square the effectiveness of the field reduces by 20%. Basic stuff but I don't want to get bogged down with different types of mines etc.

Aircraft as follows roll 1 d20 per turn per side,

Germans receive 1 flight of 6 Bf109 F-2 on a 15-17 and 1 flight of 6 Ju88 A-4 on 18 to 20. German flights arrive in square A7. Fighters are free to act however Bombers will fly along column A heading for Osel and attack a ground target there unless they spot Soviet ships (using your normal rules) at which point they will deviate to attack those on a roll of 3-6 on a d6 (1 roll only per flight).

The Russians will receive 1 flight of 6 I15s on a 15 or 16 and a flight of 6 Tup SB-2bis Bombers on a 17 to 20. As with the Germans the fighters are free to roam however the Russian Bombers will fly from A1 down row A to bomb Riga, they will deviate on a 4-6 on a d6 if they spot German Naval Units.

We managed four of us for the first couple of games so with me umpiring Andy took the Germans whilst Rob and Steve took the Russians.

The first 4 moves went relatively quietly, a dogfight was going on over the German ships between some 109s and some I15s but things quickly heated up on turn 5, a Soviet sub in square A5 had spotted the German ships the previous turn and had received instructions to attack. A quick roll of the dice and it was determined that the attack was undetected, as torpedoes sped towards the rear ship in the German line, the Torpedo Boat T1, breath was held, a cracking noise and an explosion was heard as one of the fish found its target.

There is not a lot to a TB and although it survived the initial Torpedo hit, it was on fire and the subsequent damage the next turn finished it off. The Germans had a problem however as they had an undetected sub lurking amongst their fleet. The first gun shots of the Campaign occurred on turn 7 with Z-20 trying it's luck at long range against Artem managing a hit the following turn.

It was then that the Soviet sub appeared again, this time it wasn't quite so lucky, it was spotted as it made its attack, put off as the escorts saw it the Torpedo attack was ineffective and the Kriegsmarine were able to drive the sub off. It clung to the bottom of the sea for the remainder of the game but survived to make it back to port for a well deserved pint of Wodka and a Hero's welcome. 1 - 0 to the Russians.

The first couple of groups of Russian Bombers had reached Riga and dropped their bombs there, the next group however spotted the German Fleet, it quickly wished it hadn't as a flight of 109s appeared from out of the Sun and dispatched the Bombers in one turn. 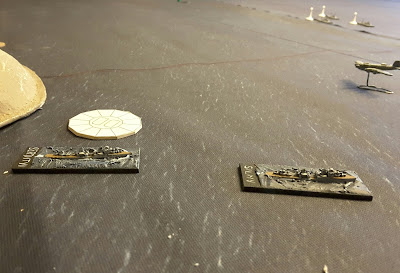 Whilst the action raged in the southern end of the gulf at the Northern end the Russian 7U Destroyers completed their mission and laid their mines, foot to the floor they sped up to join the Destroyer dogfight.

The old Russian Destroyers had chipped away at the merchants with little success but were outclassed and outgunned by the Z20. A hand full of odds beating dice put 5 shells into the Engles setting her on fire and jamming her rudder, the Germans must have fitted a laser designator on their ship as 4 of the 5 shots hit the exact same spot on the Engles not bad out of a possible 32 different locations (odds anyone ?) 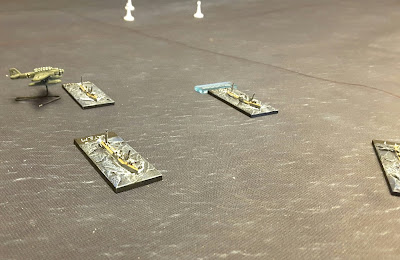 However it was the next turn that defined the game, the Z20 and the remaining Torpedo Boat launched a Torpedo attack on the three elderly Soviet ships, with her damaged Rudder Engles was always going to be at risk but with a spot of bad luck and some quality German dice rolling all 3 where hit by Torpedoes.

The Russian player was still relatively confident as Andy has a bit of a reputation, from our previous campaigns of rolling duds when it comes to Torpedo hits, but not this time, all three worked and caused damage.

The photo above shows the last hope for the Russians but it wasn't to be, all three of the old Destroyers were sunk, the Project 7U ships saw the carnage and turned for home.

But that wasn't the end of the game, the German merchants still needed to get home to Riga, an easy job if there wasn't a submarine and a mine field between the cargo ships and their destination. 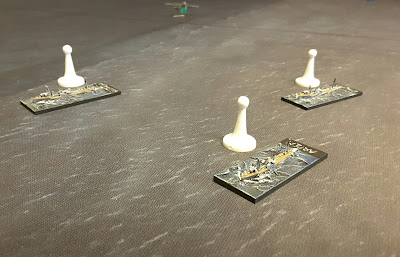 The submarine again managed to radio it's position , and get an attack away, one of the merchants was struck on the bow with a Torpedo,  it survived but only just, luckily the Germans managed to detect the sub and damaged it preventing further attacks, a final setback occurred for the Germans when the undamaged Merchant struck a mine. It was lucky though and suffered minimal damage.

So both sides completed their mission objectives  (the Germans just, one of the merchants was only just afloat). The Russians had lost three ships the Germans one, the Soviet losses were old obsolete Destroyers and there is plenty more where they come from, an explosive start to our Campaign.
Posted by Yarkshire Gamer at 13:25:00