WW1 Naval - Let's have a game with the bad stuff

Every gamer loves a game with the cream of their collection, who doesn't enjoy a couple of Tiger Tanks on the table or advancing an unstoppable column of French Old Guard. It's the same with us Naval gamers if your giving the Jutland fleet a run out you want the 15" Battleships, Derfflinger etc so for a change this Sunday we got the "less able" parts of the fleet out for a game.

So the Germans had one Sqn based around 3 Pre Dreadnoughts, Deutschland, Hannover and Braunschweig, a old Light Cruiser Frauenlob and 4 small V1 torpedo boats. The second Sqn shown above consisted of Blücher, Nurnberg  (LC) and 4 1914 Torpedo Boats. 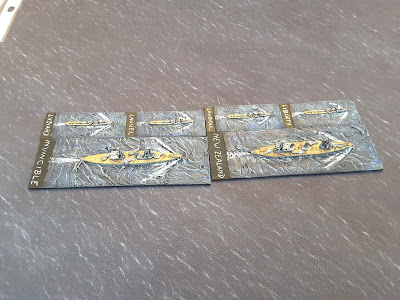 The British lined up with 2 quick but flimsy Battlecruisers Invincible and New Zealand supported by the Light Cruiser Galatea and 4 L Class Destroyers in one force and a "Coronel" Sqn of Canopus, Good Hope, Monmouth, a LC and 4 I Class Destroyers. 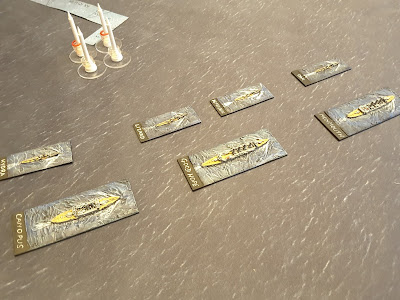 Our usual random set up put all the German ships on the southern end of the table opposite the Coronel Sqn with the Battlecruiser action good distance away at the other end of the board. 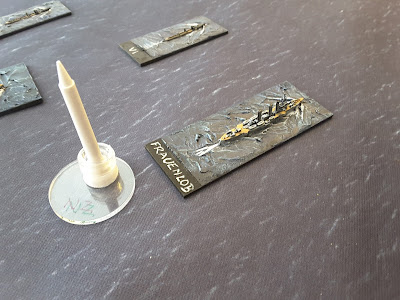 As the ships came into view the ranging phase began, the Battlecruisers and Pre Dreadnoughts where initially out of range of each other for a couple of turns, however the Frauenlob was particularly unlucky as a 12" scored a lucky strike taking a third of the ships damage in one phase, thankfully for her the Hannover came into range next turn and the British switched targets.

Last game every shot seemed to hit a Rudder whilst this week it was Funnels, every other hit, funnel (there is a 1 in 60 chance). Funnel hits lead to a loss of speed which when you are starting at 18 knots or so is bad news. 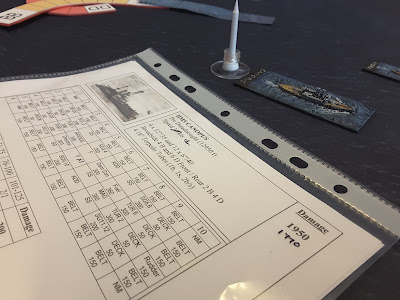 Very early on Canopus was down to 12 knts, not good. The rest of her squadron left her too it and fired up their boilers to increase there speed. With time and space on their side the Germans sent all their 8 Torpedo Boats towards the Coronel Sqn and it's 4 weak I Class Destroyers.

With the British Light Cruisers elsewhere the Germans had the numbers and the British were taking hits. We introduced some baby splash markers in this game to mark Light force firing, the more ships fire at a target the harder it is to hit, they worked great, helped with remembering who fired at what and added visually too. 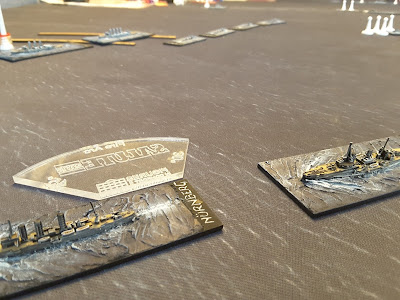 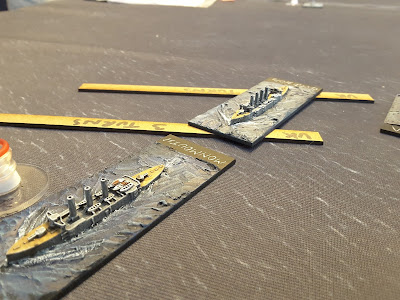 The Germans managed to get a good Torpedo attack off on both Monmouth and Good Hope but the God of Dice decided that a hit wasn't to be. Although they did have a good turn shortly afterwards sinking 3 of the I Class in one turn. 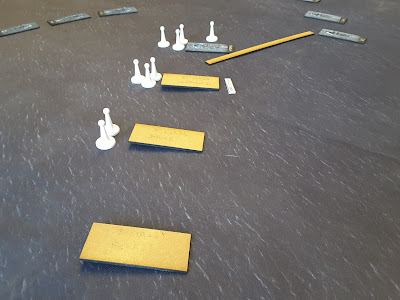 We were a player down due to illness this week so we didn't get as much in as we normally would. As the game drew to a close Nürnberg sank after a lengthy gunnery duel with Monmouth whilst at the other end of the table and attack on the Pre Dreadnoughts never really got off the ground as 1 L Class Destroyer was sunk and another withdrew after a Bridge hit. 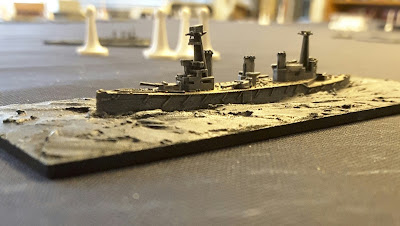 So at the end of the game the losses were as follows, 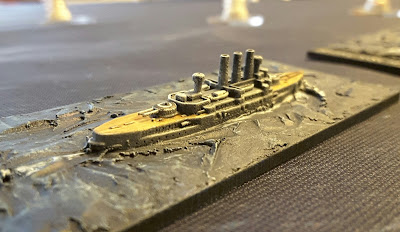 German damage was, Hannover and Braunschweig about 40% damage no critical hits but Hannover down to 12 knts. Frauenlob only received 1 4" hit after her initial hit from New Zealand whilst Blücher wandered a but close to Good Hope and lost a front turret.

For the British the Battlecruisers were only lightly damaged although Invincible was down to a 22 knt maximum after, you guessed it, a funnel hit. Canopus suffered a number of hits after losing speed but survived with nothing more than secondary guns losses. Monmouth had lost over 50% of her damage value but that wasn't a bad result against Blücher. 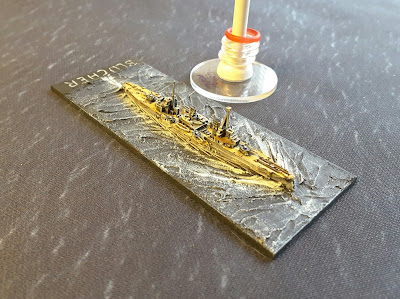 Blüchers gunnery throughout the day was dreadful, during the ranging phase she threw two turns back to back without getting a single ranging point, she then managed to regularly roll handfuls of 1s and 2s at close range getting solitary hits when statistically she should have been getting 5 plus !

Another good run out for the rules. We had a brief discussion about how the Armoured Cruisers worked in the game and a few tweeks are needed with some of the firing protocols to fit them in better, but only minor additions rather than major alterations. When I get the Jutland Armoured Cruisers done I will revisit that aspect. 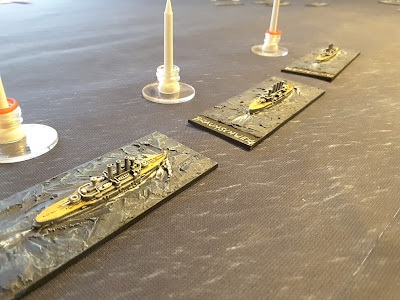 The German Pre Dreadnoughts vs the early British Battlecruisers is a very interesting match up, I had a bit of a jokey chat with an American Gamer on the Naval Wargaming Facebook page about which would win a match up. We didn't really answer the question in this game but it's definitely one to revisit. For me it could go either way, less hits on the Battlecruisers but less armour and we all know what can happen if you hit the wrong (or right bit depending on who you are playing) bit.
Posted by Yarkshire Gamer at 09:18:00