The focus of the year has been ships, ships and more ships, about 3 months ago I started to flag a little bit and decided to add something completely different to the paint schedule.

Like many; unpainted figures are not hard to come by in the Reilly household. I do keep a record of the figures I buy against the figures I paint  (shown on the right of this blog) and have over the last few years made a reasonable dent in the lead mountain as can be seem. This however does not tell the whole truth as it doesn't take into account the starting size of the lead mountain.

Well without boasting; it's massive (ohhh error Matron). I started to count a couple of years ago and stopped when I got to 3000 a long way from the end. It's all my fault of course but in my defence there a loads of Adler ACW which I got for next to nothing off a Bring and Buy, a ginormous amount of 10mm Malburian  (unstarted, huge due to an ordering error) and a massive amount of 15mm AB Prussian figures I picked up from a friend. On top of that are the stuff for ongoing projects and the stalled  (due to Jutland) 28mm Crusades pile. 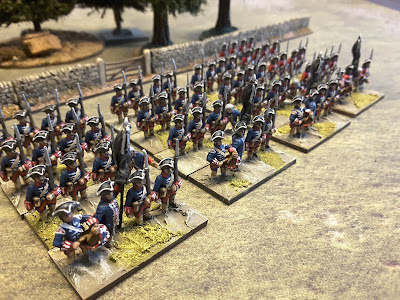 I had started to make a dent into my SYW 15mm collection last year and have continued into these 12 months. Yarkshire Gamer Painting Dept has managed to get into a good swing with these figures. I work a 6 on 4 off shift pattern so my "week" is 10 days long rather than 7. I start each "week" with a battalion of figures (usually 16 or 20) primed and fixed to painting sticks. That is my minimum painting for the next 10 days and I discipline myself to not touch any other stuff until that unit is finished. 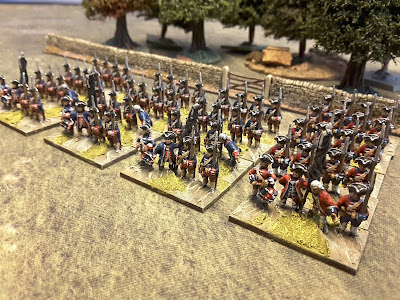 It's worked remarkably well, so far I have finished off the Blue Moon British Infantry I had, done these French and I am now 2 Battalions in to the 14 units of Saxons that have been sat in a box for over 15 years. Once the unit is done the rest of the 10 days are mine to either not paint or work on other projects, did someone mention Jutland ! 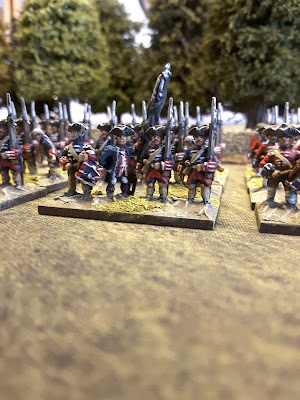 So the figures themselves are 15mm Essex Miniatures which I think I purchased at Salute many moons ago. Essex always have their own distinctive "chunky" style which some people don't particularly like. I'm more than happy with, a) getting them out of storage and b) getting some paint on them. 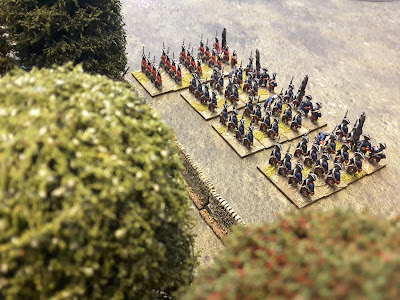 I am not after winning Golden Demon prizes with these,  just a good steady standard to fit in with the rest of my collection. Rules wise I use the General de Brigade SYW spin off Die Kreigkunst the French units are 16 Figs the Swiss 20. The only pain with these figures is the cast on flag, it's so tightly wound that it's impossible to work out how the flag would sit so I have left it black simulating the flag still being cased. 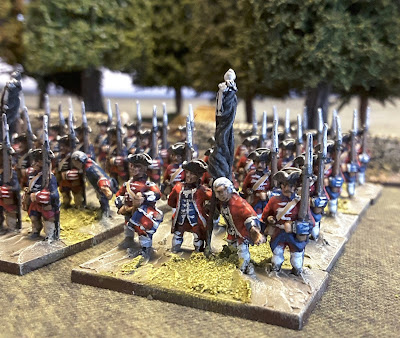 So there we have the finished Brigade, they did wander out of the Palace on the odd occasion, particularly for Vellinghausen so they should see some table action one day. Back to the ships and the Saxons.
Posted by Yarkshire Gamer at 16:51:00