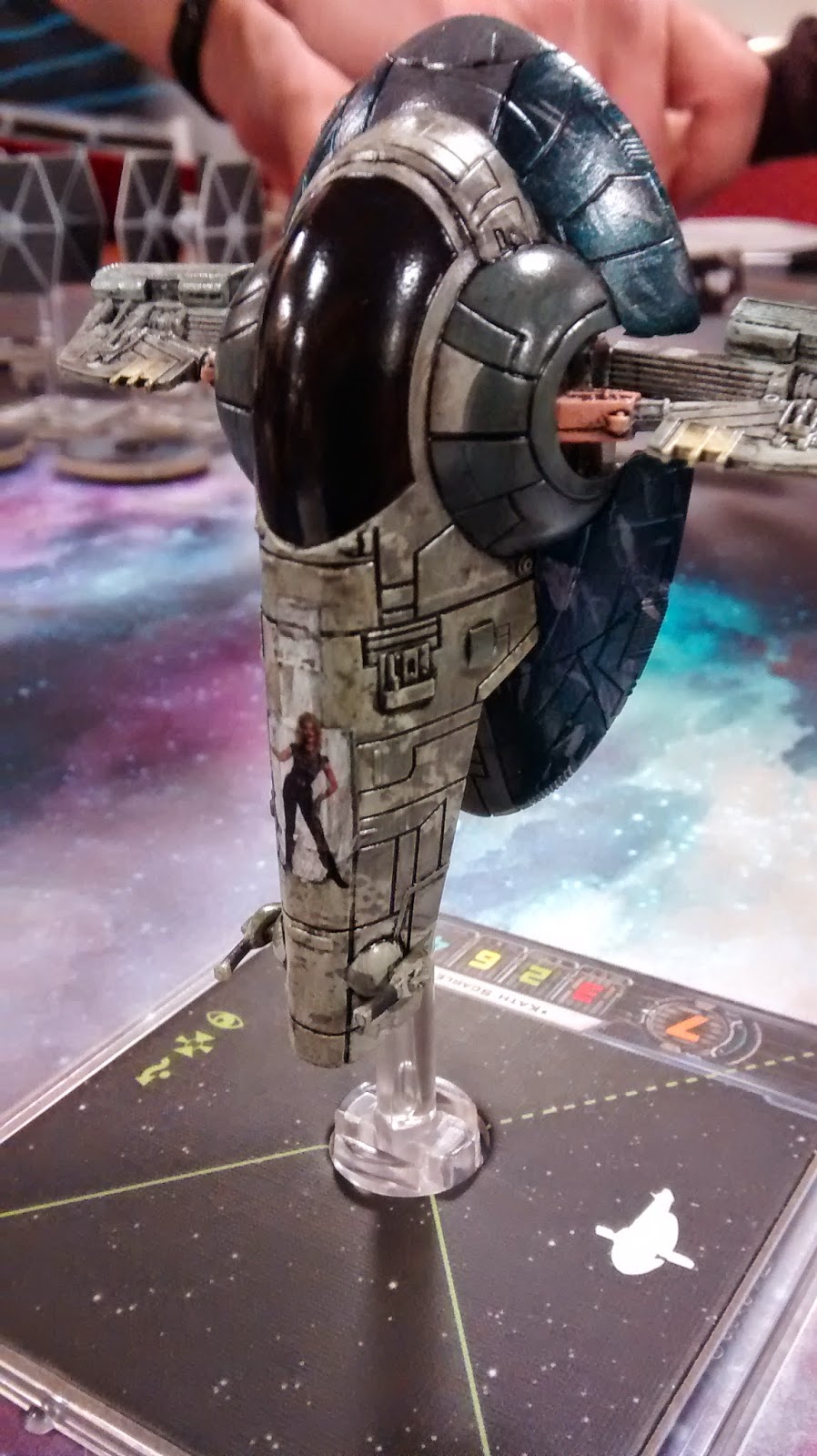 "A female spy has just escaped from our secure facility on a nearby planet, she has escaped in her modified Firespray before we could even get the door open.

She has information valuable for the Empire and she must be stopped, she has details of a new computer virus we are about to unleash on the Imperial troops

She must be stopped, shoot her down before she escapes" 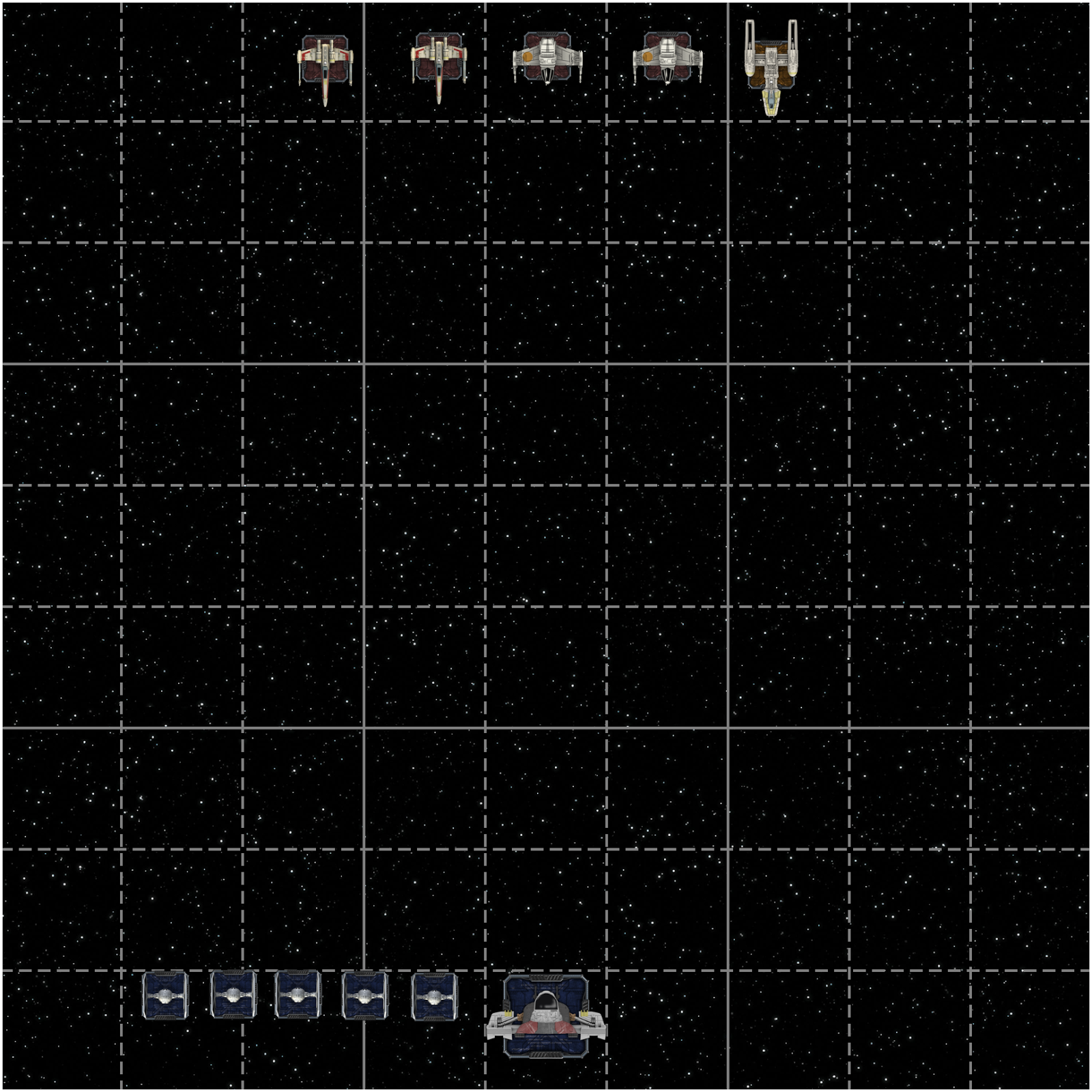 Empire Set up with the Spy in her upgraded Firespray and 1 Tie per rebel, 1 in 3 (or part off) Ties will be a named pilot the remainder a random squadron pilot. Shuffle together all your named pilots and let the Rebels draw the required pilots (we had Howlrunner and Mauler Mithel) same with the Squadron guys (we had 1 Academy PS1 and 2 Black Sqn PS4.

Both sides start range 1 from their respective table edge. 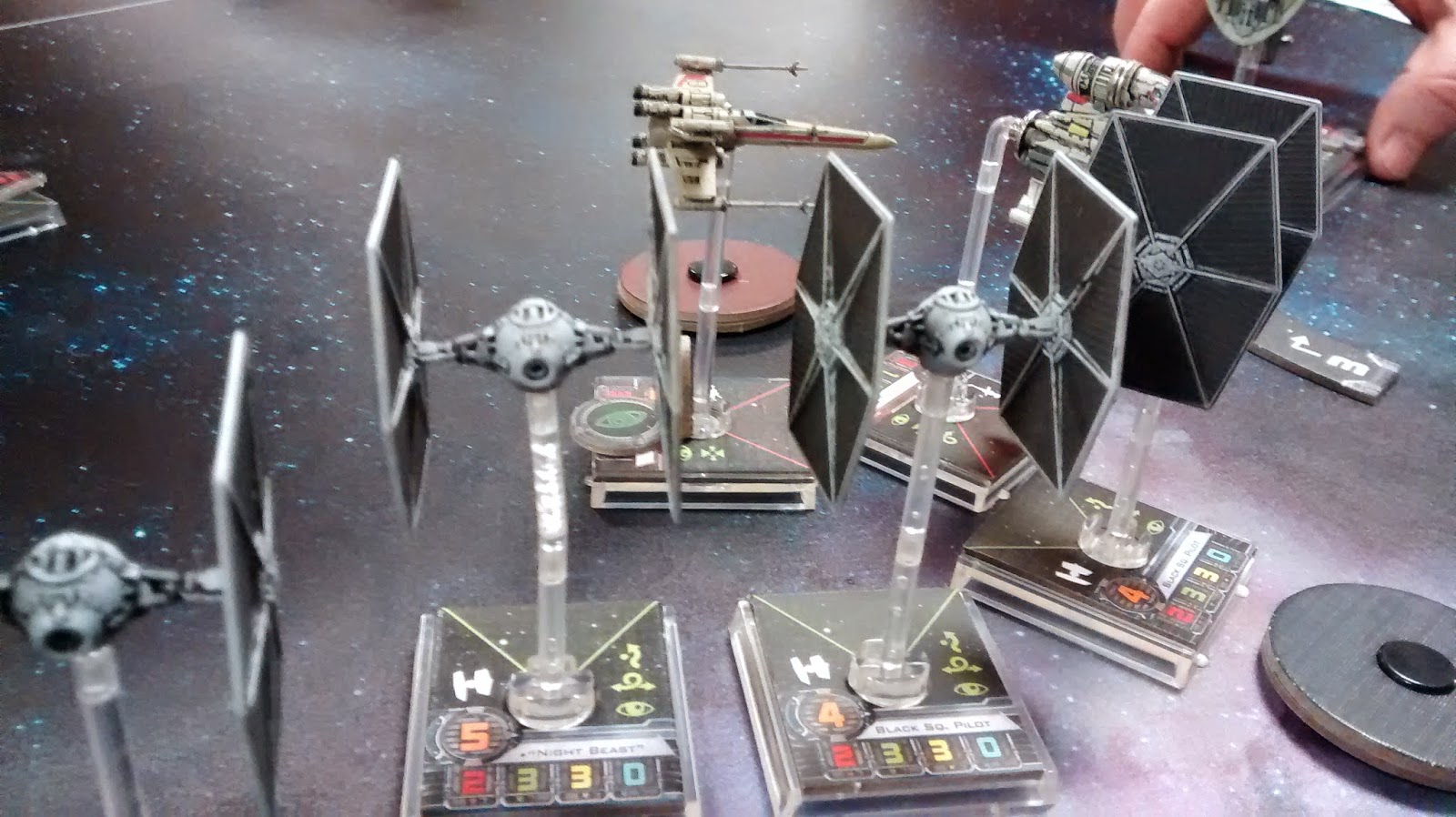 Proton Laser - 4 attack die, unlimited range, requires lock on (which is unlimited) defender gets extra defence die on anything over range 3.

Nanotech Hull - New Tech shields the hull, ignore all Critical Hits, discarding them totally doing no damage at all. 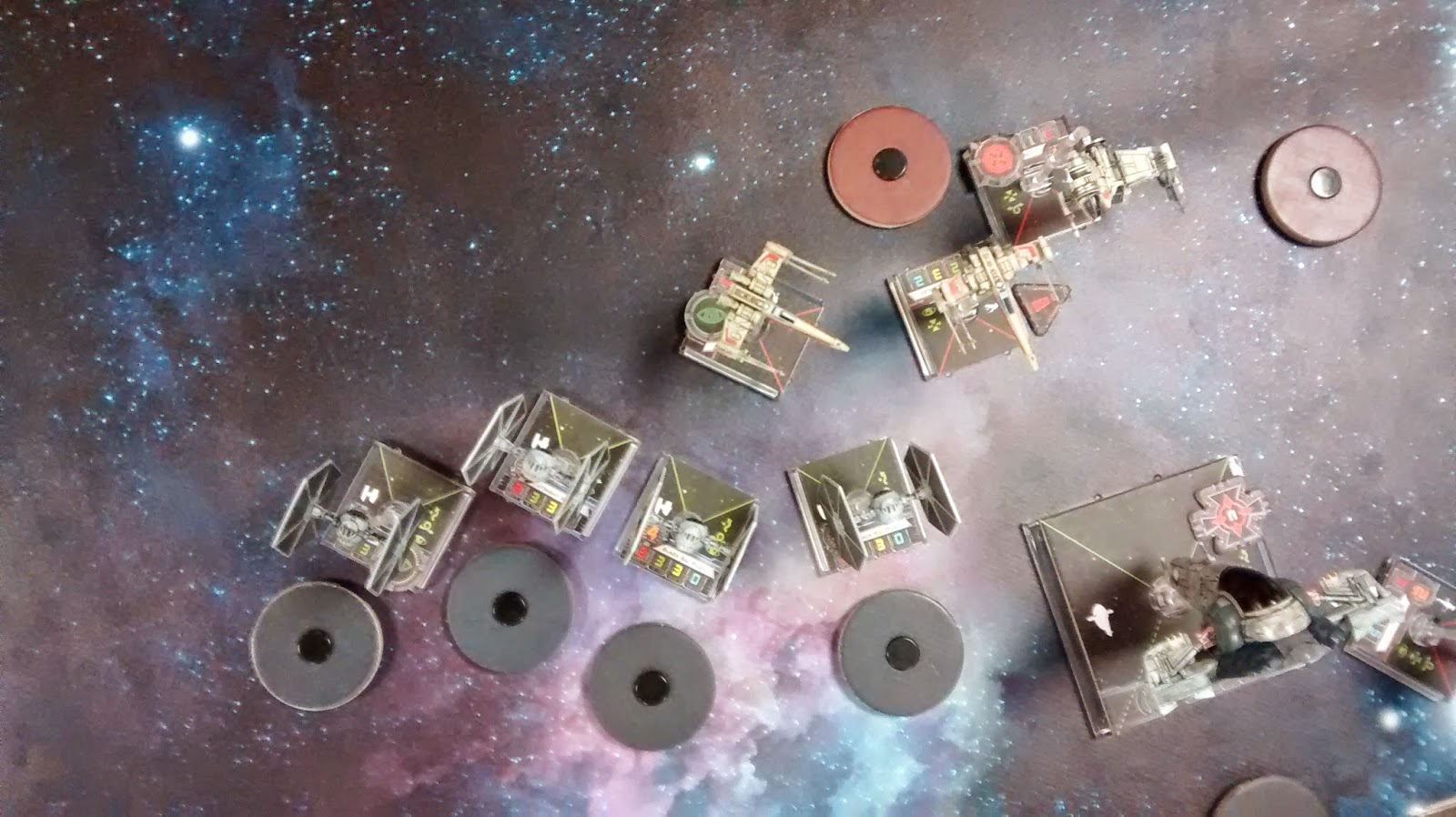 Computer Virus - unknown to the Rebels before the game starts, every time they fire at the Firespray roll 1 extra attack dice and on a critical they become infected.

Roll 1d6 for effect (for the duration of this scenario)
1 - Any Astromech stops working.
2. Any "Computer" upgrades stop working.
3. Ships engines are effected, treat as ionised this turn, roll 1 attack die per turn afterwards and any critical ionises the engine for another turn.
4. Lock on capability is lost.
5. Targeting Computer is broken, treat any Critical Hits as Normal Hits
6. Ships Firewall fights off the virus, no effect. 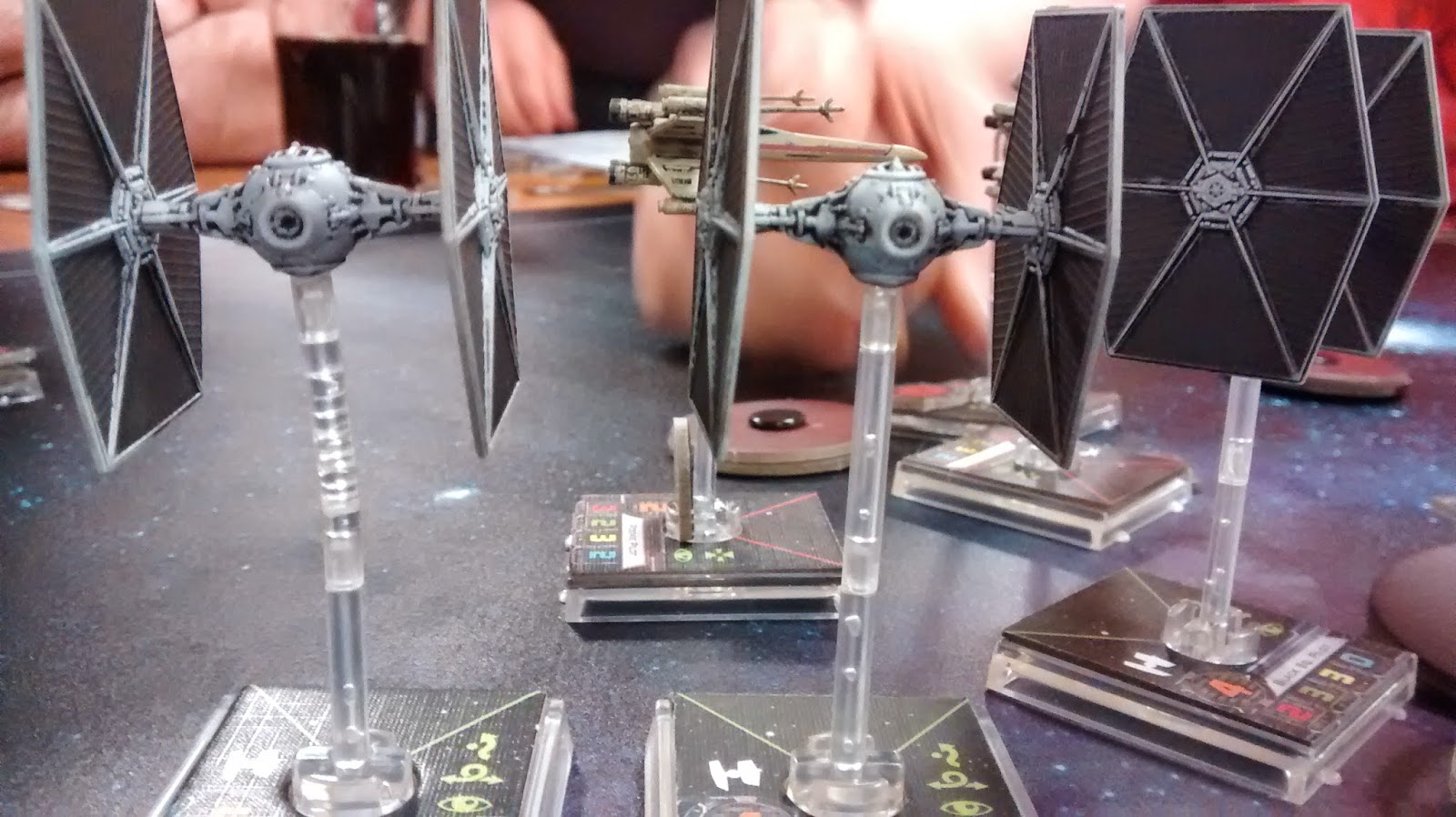 Just the five pilots taking on the Empire this week and another disappointing outing for the Empire. The Firespray didn't perform as well as I had hoped, it got out on its own rather than keeping at long range to make the most of its Proton Laser. It got cornered by the Rebel Scum and shot down on turn 5 by Commader Kerr, it wasn't all medals and dancing Ewoks though as Spike Sharpie had his X Wing blow up underneath him and Commander Kerr came home with some interesting underpant decoration having got down to one hull point and saving 3 hits just before jumping. 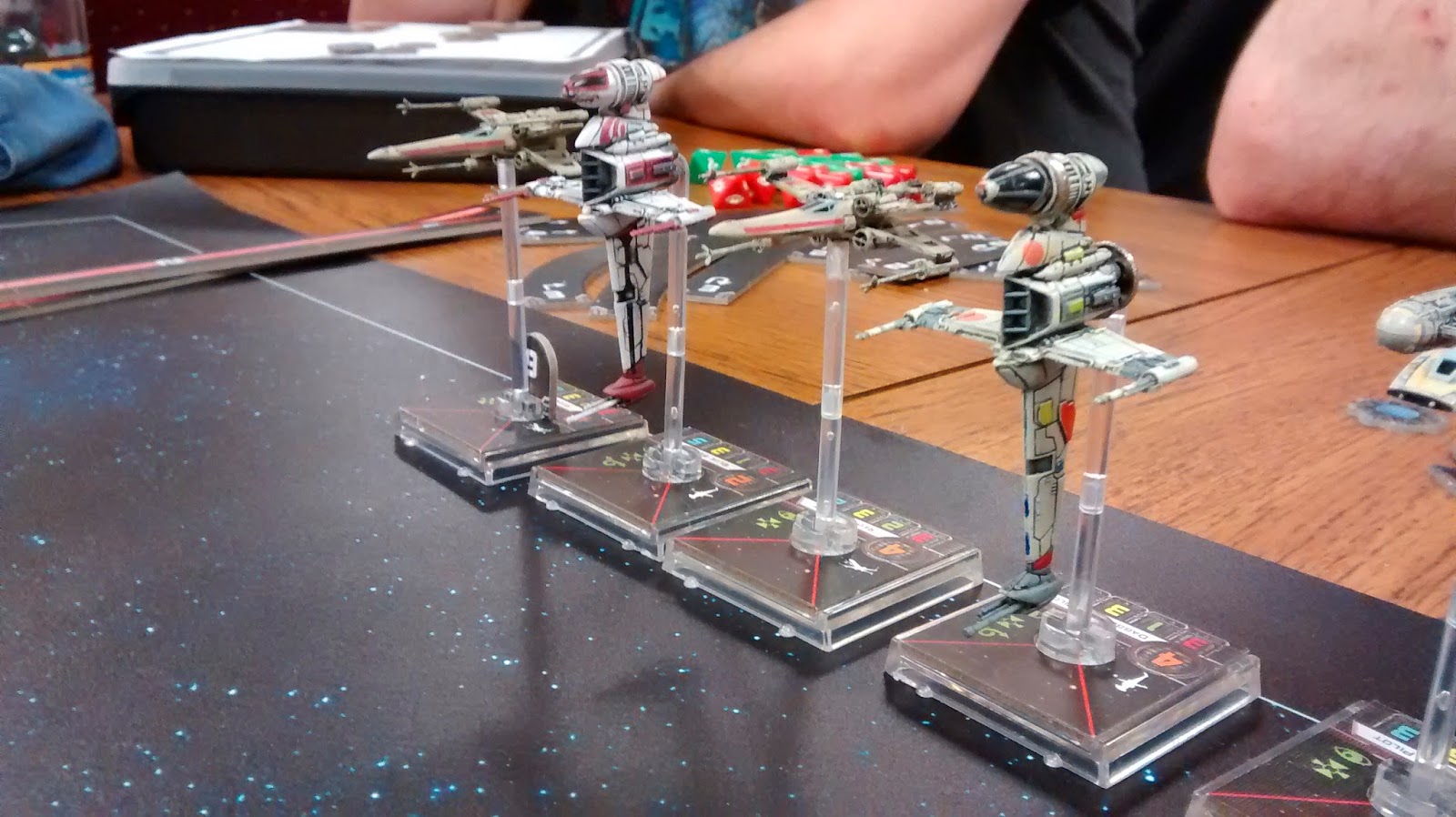 Jim head mechanic in the Rebel Garage was back at work this work after his fortnight off.

We've used some different tech and rules in these scenarios I'd be interested on what you think to the upgrades etc. X Wing madness will return with game 12 in about a fortnight. 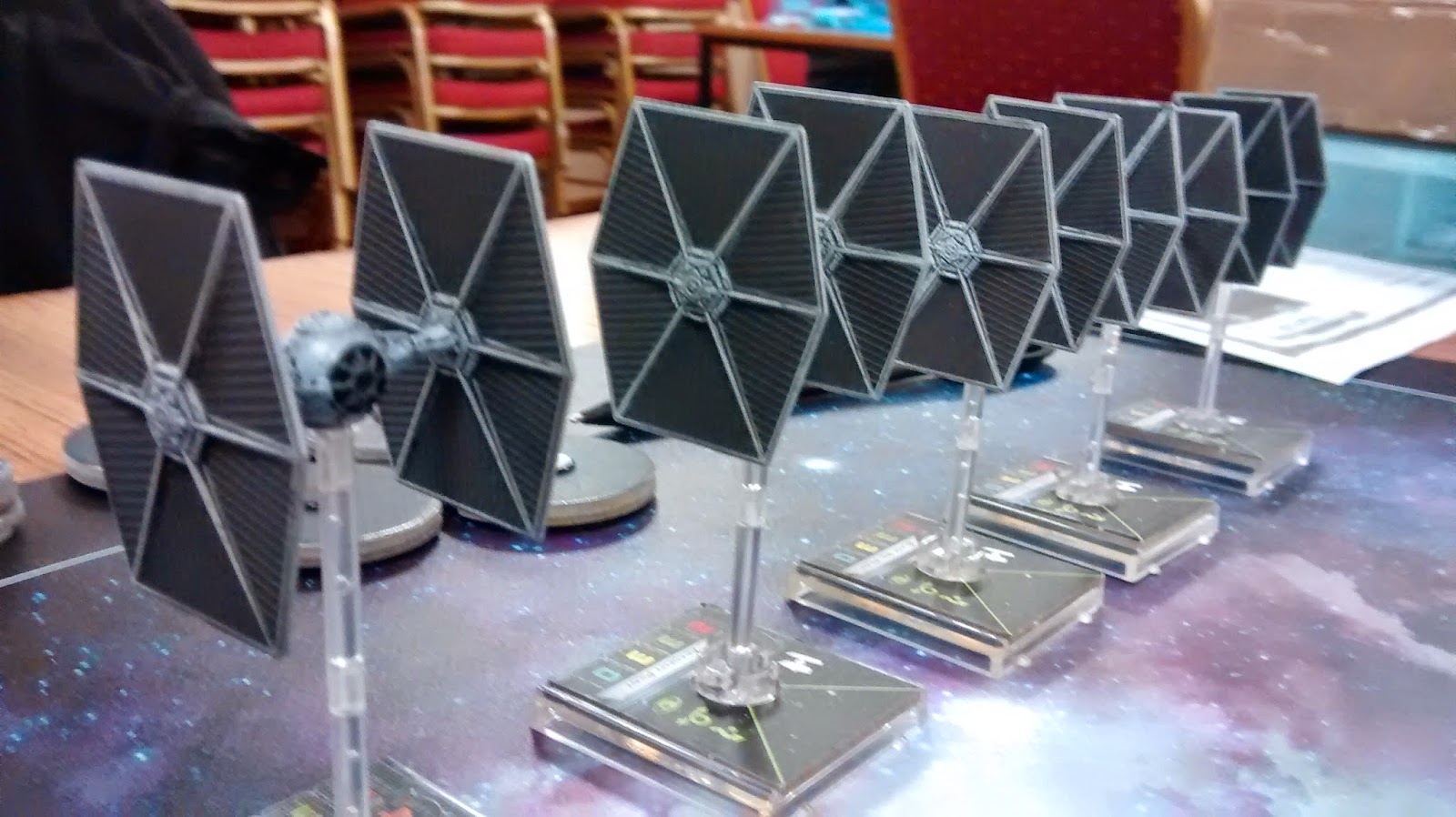