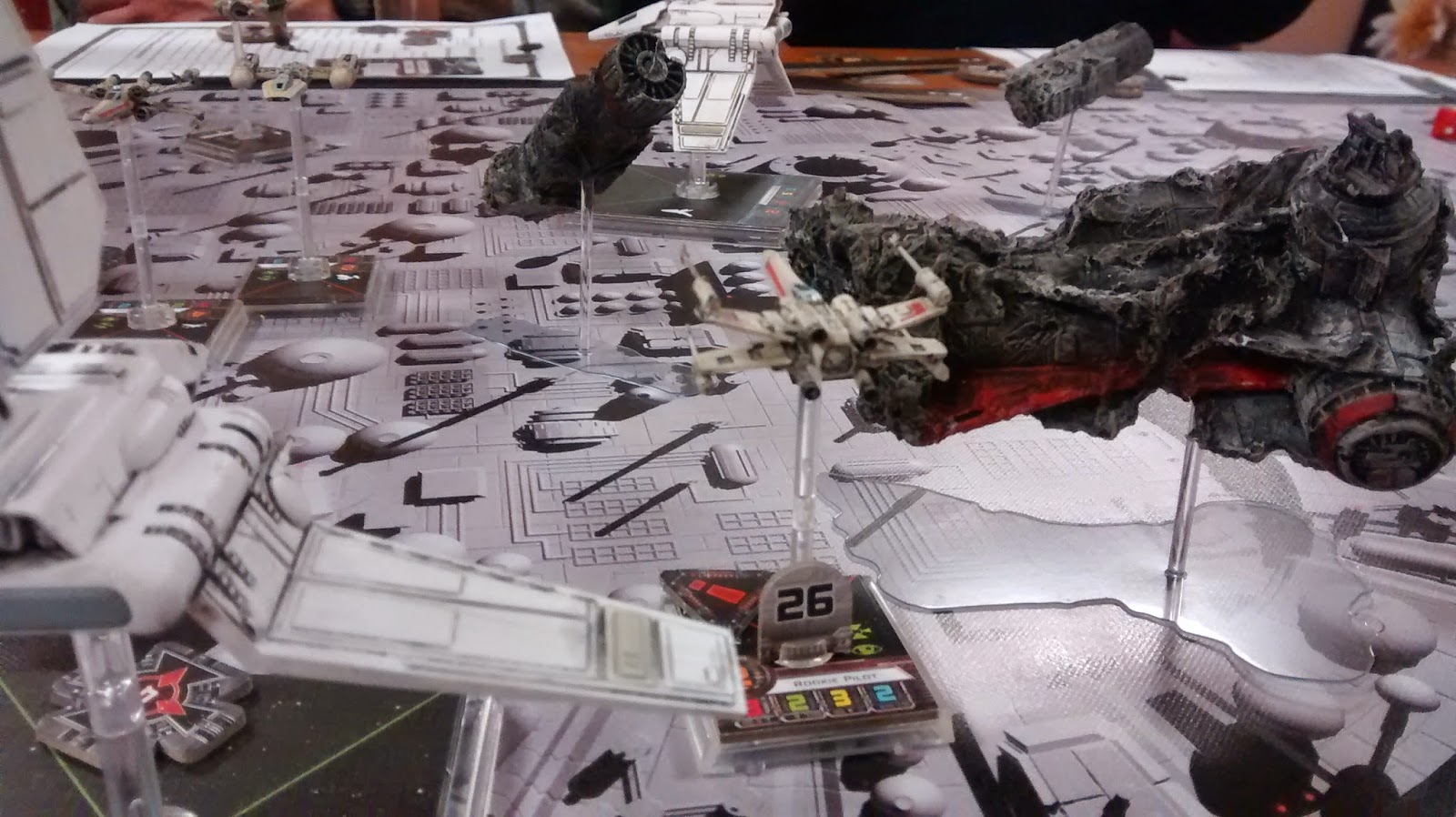 Rick O'Shea tricked out his B Wing with a shield modulator.

Crank Case sold his Auto Turret and replaced it with an Ion Cannon Turret.
Everyone else saved their credits.

"Everyone is in a good mood, you are returning from a successful mission against the Empire and you are jumping in to rendezvous with the frigate Tiberion before returning home.

The first thing you notice coming out of hyperspace is the Tiberion floating past the window, well bits of it anyway, then you realise that you are only a few hundred meters above the deck of an Imperial Destroyer.

As you see hangar doors open and 3 Assault Gun Boats head towards your location, you punch the hyperspace button, apart from some clunking and a high pitch wine nothing happens.

Fix your hyperdrive and get out of there" 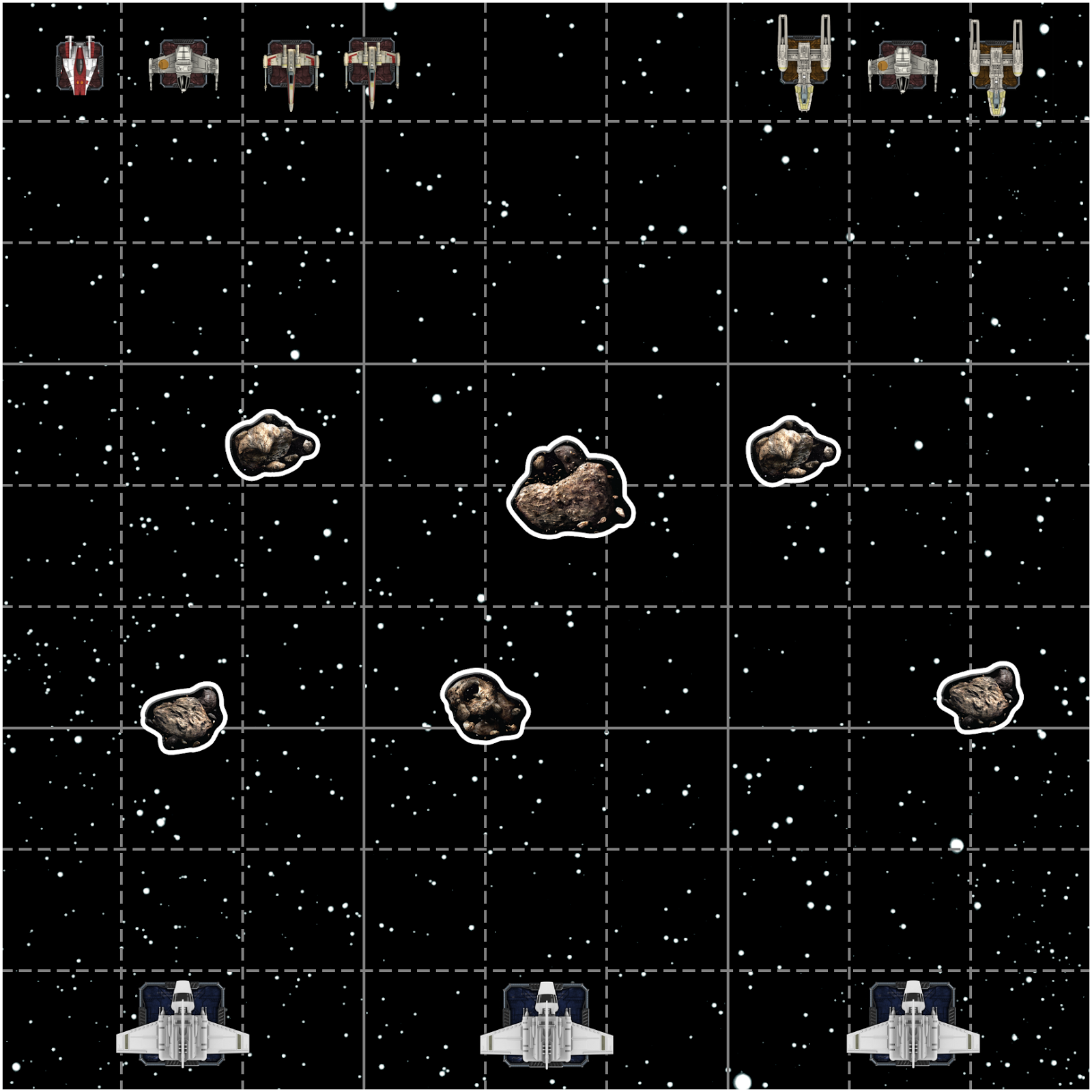 All rebel ships with missiles / bombs etc roll 1d6, 1-3 and the armaments were used in the action before they jumped in and are not available for this scenario.

Place Assault Gun Boats on the table, 1 for every two Rebel ships.

Each Gunboat is armed with 2 x Proton Torpedoes and 1 x Proton Bomb and equipped with a Shield Modulator.

Both sides start range 1 from their respective table edge, six asteroids are spread randomly across the middle of the table to represent the destroyed Rebel Frigate, if you have any ship debris like the rather cool ones Rick O'Shea has obtained, use them. (standard 3 x 3 table set up).

Use a ship deck table cover if you have one (we do but I don't have one on computer for the set up pic). 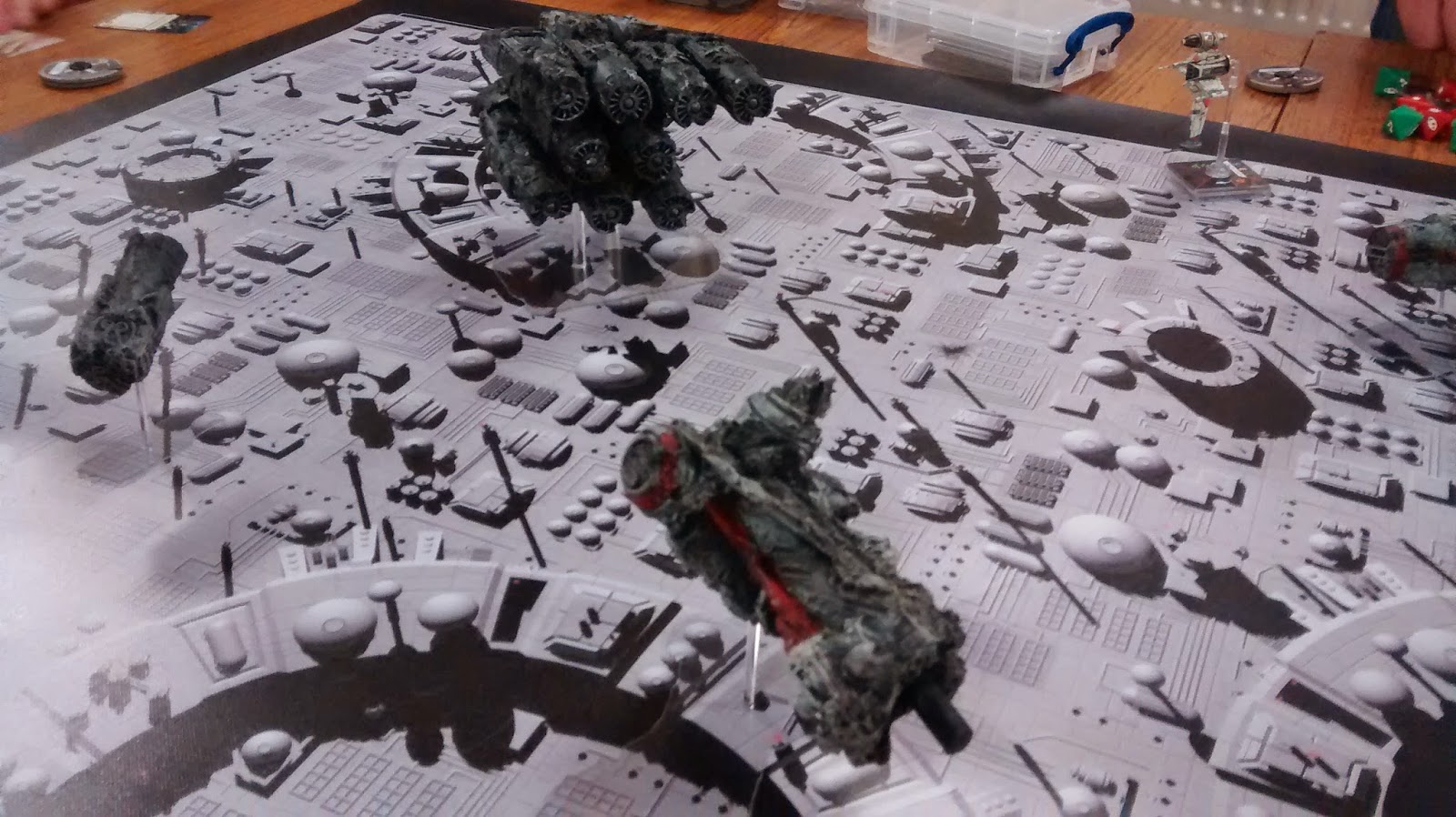 Destroyed Frigate Debris - Treat as normal asteroids however any Rebel ships within range 1 at the end of a turn gain a stress token. 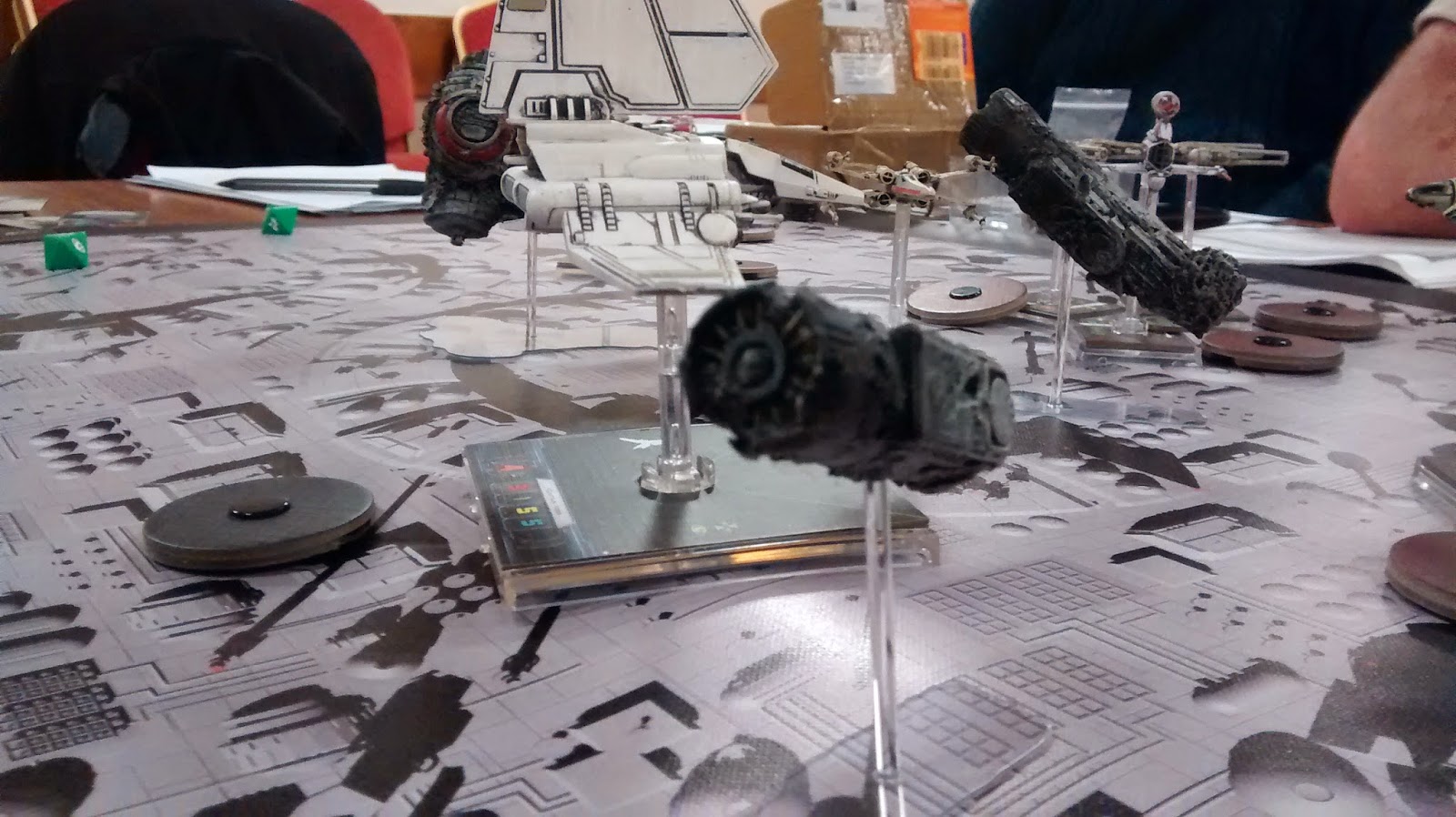 Rebel Hyperdrive - comes back on line on turn 6 and pilots may start the jump sequence then. Units with mechs may attempt to fix their drives on turn 1, roll a hit and its fixed and functional from the next turn, however roll a crit and the poor mech fries itself. Any other result is a fail, try again next turn.

Empire Star Destroyer point defence - On turn 5 the destroyer becomes active and roll 1 attack die against each rebel ship, using usual firing rules. Add another attack die per ship per turn to a max of 4. Destroyer fires last. So each rebel ship will be attacked by 3 die on turn 7. 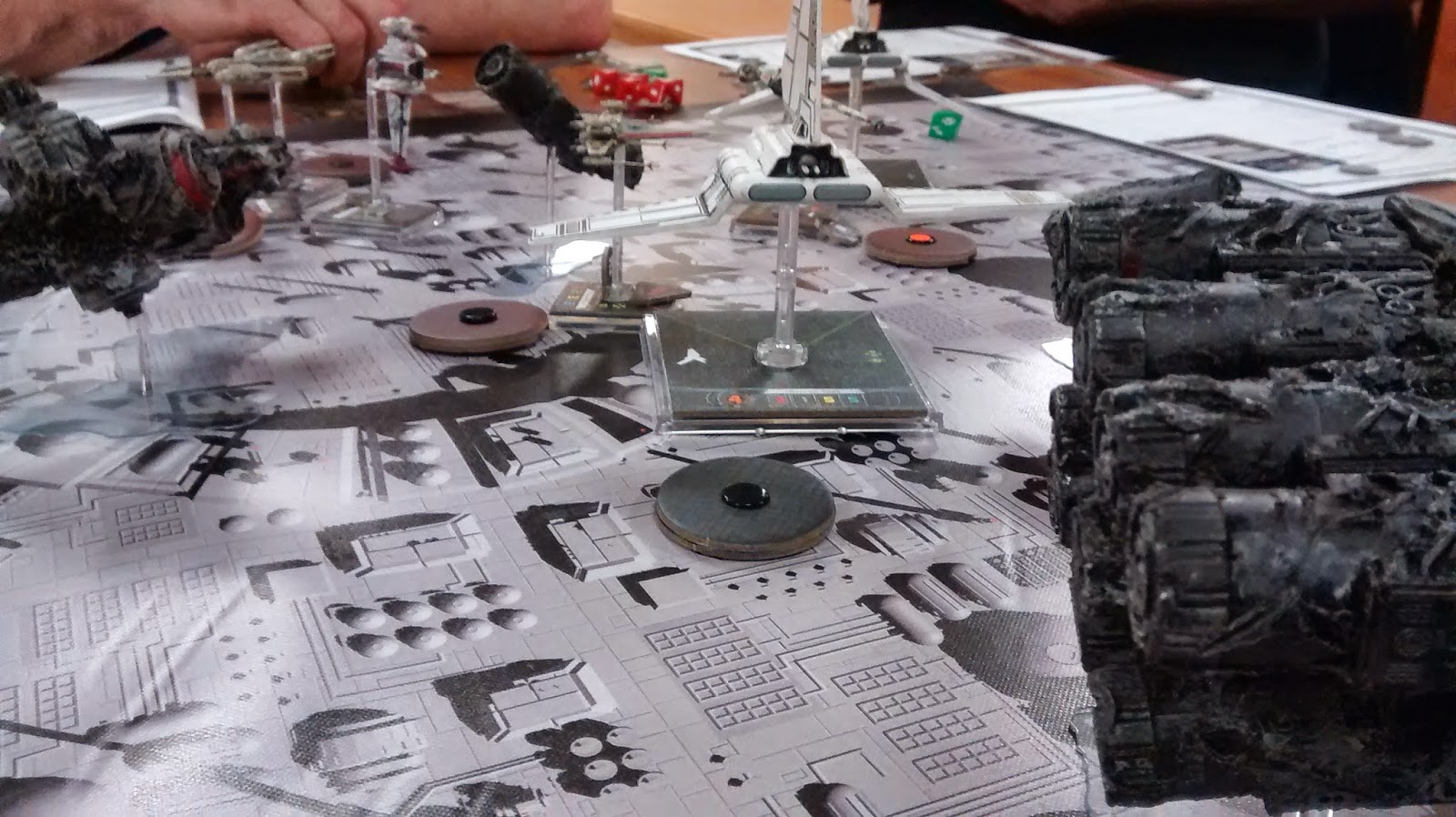 Rebel Victory -  More than half of the Rebel ships jump away.
Imperial Victory - Stop the above.

Back up to seven pilots taking on the Empire this week, some sly tactics from the Rebels this week with one player turning up late after I had set up meaning they only faced 3 gunboats not 4 ! The debris proved to be more of a hindrance to the Empire with the larger gunboats. Bit too easy for the Rebels, they managed to pick off the gunboats one at a time. It got a bit close for some Rebels when the Destroyer opened up, Commander Kerr especially had a squeaky bum moment being saved by a focus token. 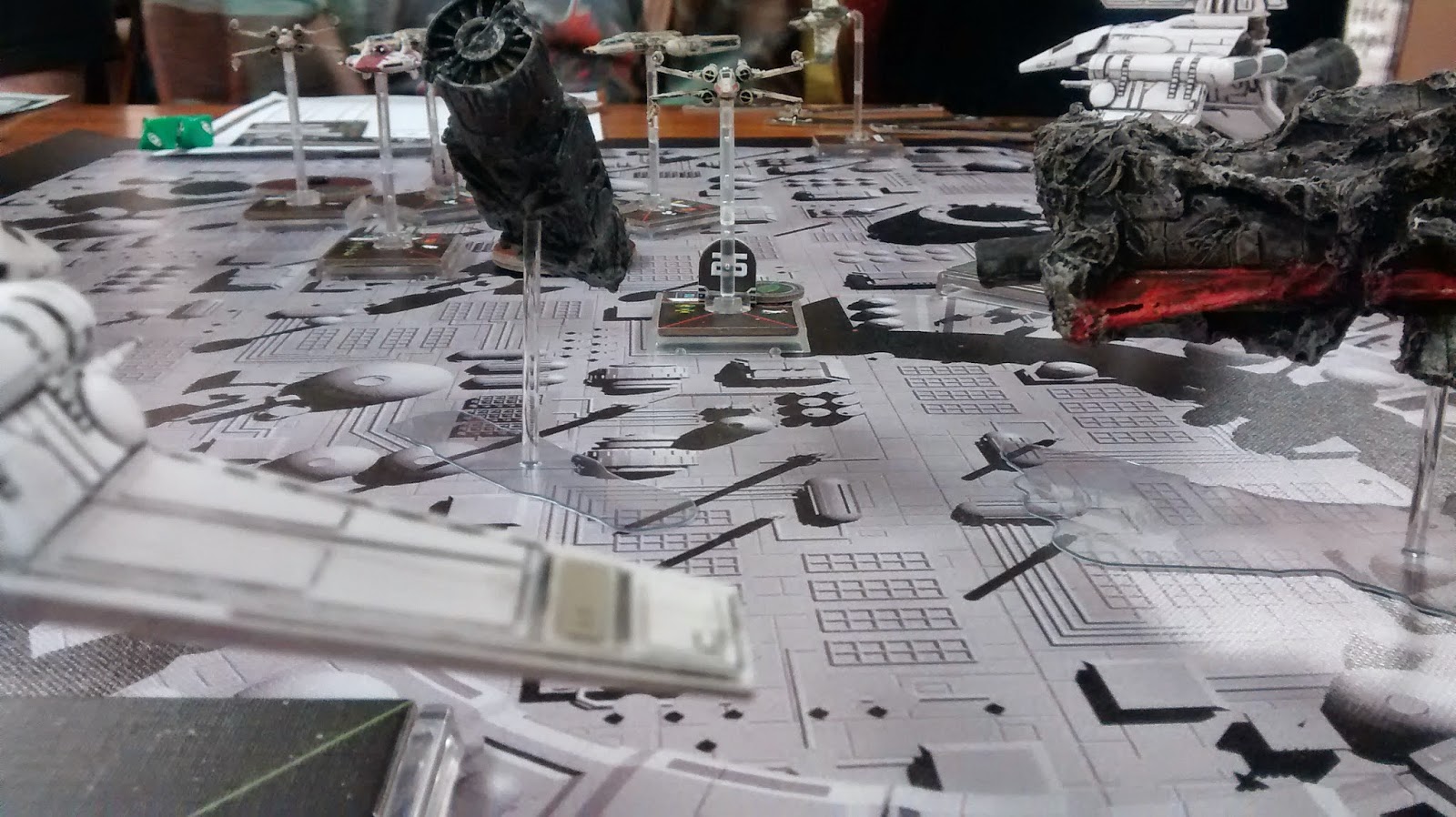 Jim head mechanic in the Rebel Garage is having a second week in Skegness as theres nowt to fix.

X Wing madness will return with game 11 in a fortnight. Hopefully one day FFG will bring an Assault Gunboat model out. 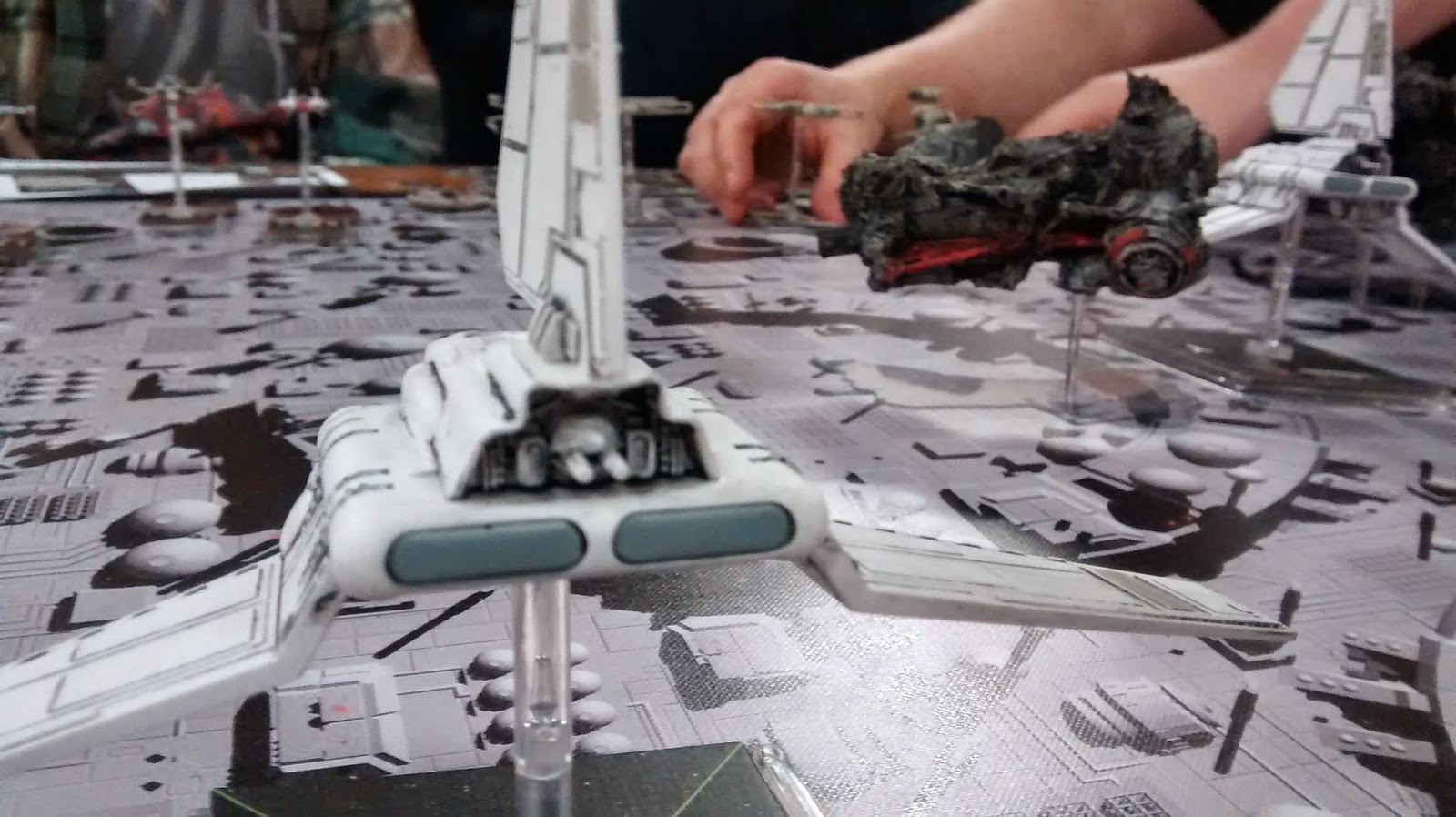