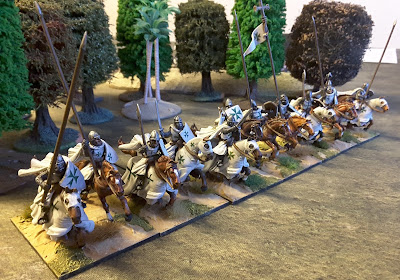 There has been a bit of a minor surge on the old Crusades Project of late and today I finished off these, my second unit of Knights, representing the St Lazarus Order. The figures themselves are 28mm from Fireforge Games, the same as my recent Hospitaller Knights however these are built from the Templar Knights box set. The two sets are similar but the Templar set contains 6 horses without caparisons and a selection of earlier period crash hats. 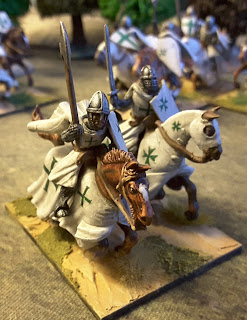 So with the Teutonic Knights set I was avoiding winged helms and the like but with this set it felt a lot closer to my chosen time frame of the third Crusade. I really like these figures and have given me a good cost effective way of getting the figures to get into a period I have been interested in for years. 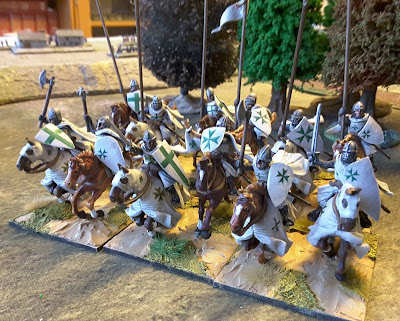 The figures have been painted in my usual style, with the horses painted first using the oil paint / wipe method, followed by the riders and horse caparisons etc with Acrylics, based on mdf which is then textured and painted. I have cheated slightly and used the Battleflag decals for the crosses. 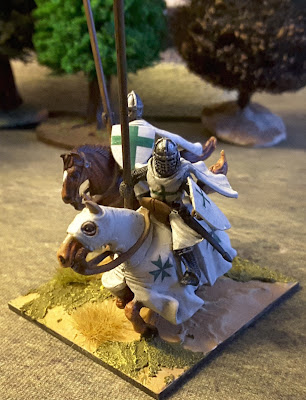 The boys of St Lazarus are something a little different from the norm in a Crusader Army. The Order was formed around 1200 and its primary focus was on the care of sufferers of Leprosy. The Order did however provide relatively small numbers of men for Military Service, the exact date of the first instance of this is unknown but it is highly likely that the Order was represented at the Battle of Hattin in 1187 and then later in the mid 13th Century at Gaza, Ramla and Acre. 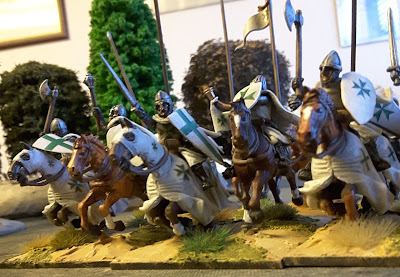 They were however a very small Military Order for example they only mustered 25 Knights for Acre. Many of the serving Knights (also known as the "Living Dead") were sufferes of Leprosy, whilst they were in the early stages of the disease they were still able to fight and also care for those more affected by Leprosy, after all with the shortage of manpower in the region, every trained man who could fight did. 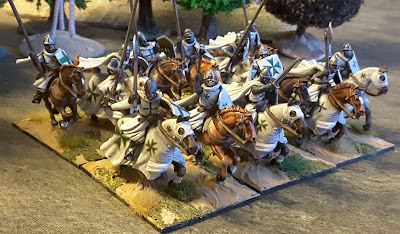 There is a decent book covering the history of the Order (see below) that I can recommend, in fact I read it a number of years ago before starting out on gaming the Crusades so the book was no doubt a inspiration for the unit. 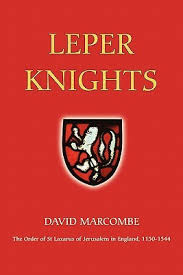 So I now have two units of Crusader Cavalry and two of Saladins lads painted, next up for the Crusades will be some more Muslim Cavalry as the horses are done on them. I picked up a couple of boxes of the Mounted Sgt figures from Fireforge at Derby along with the Gripping Beast Poor Knights of the Temple of Solomon set to add to the pile, eventually I will do some foot sloggers, but I just love Knights !

Next up on the paint table are 15mm SYW Hanoverian Artillery whilst on the gaming table we are halfway through the ACW Battle of Champion Hill.
Posted by Yarkshire Gamer at 14:11:00