A New Year a new X Wing Campaign Game, welcome back, if you didn't know this is a continuation of the X Wing Campaign, full explanation and details of Campaign rules are here. This set up page is updated on a regular basis. 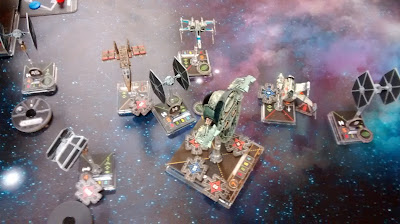 Deep Space scanners have picked up an Imperial Squadron en route to intercept one of our CR-90s the "Bold Light" which is having to re fuel following a malfunction on board.

Get in and protect the ship whilst it gets underway and escort it off table. I don't have to remind you that lasers and missiles don't mix with space fuel. 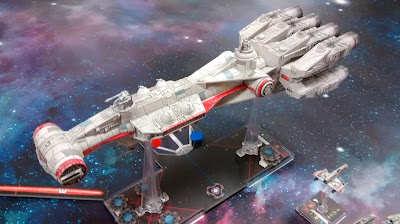 Back to our hardcore of 5 Rebel players for our first adventure of the new year. 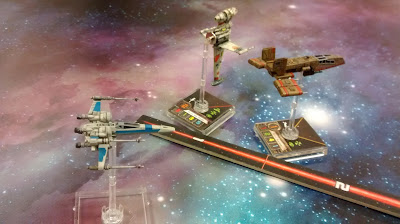 Back to our usual Imperial ships this week

Empire set up is as follows, Start with the Firespray and then take one ship per Rebel Player plus one, so our 5 players fight 6 Imperials plus the Firespray. 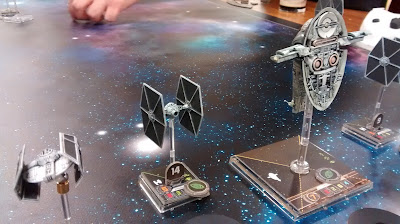 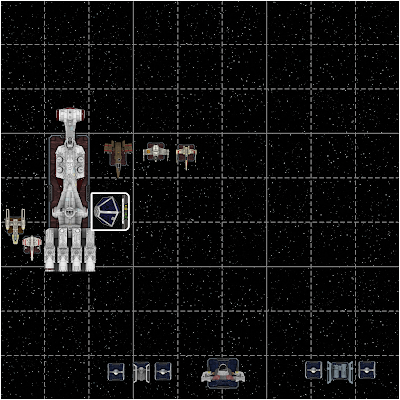 Place the CR 90 halfway along the table range 2 from the left hand table edge with a large pod next to it to represent the fuel bowser. Rebel players set up range 2 from the CR90 facing in any direction.

Game lasts until one side secures victory or the end of turn 8. 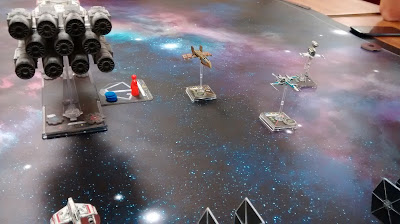 Docking Container - Contains the fuel for the CR90, It has 5 hit points and 2 dodge dice. If the hit points reach 0 the container explodes regardless of the amount of fuel left in it. Place the range stick next to the container so that the 3 zone is on the edge of the container. ANY ship in the 3 area receives an attack of 3 dice, in 2 two dice and 1 at maximum range. These "attacks" occur when the explosion occurs and ignore PS, any hits cannot be modified in any way. Place 5 counters on the Container to represent the fuel supply.

CR90 "Bold Light" - Starts with no energy and during the activation phase it receives 1 energy / fuel from the container by exchanging 1 fuel counter for 1 energy counter as an action. Whilst stationary the CR90 can choose to use its energy counters as per the standard game rules however it can only gain energy counters from the refuelling process.

At any time the Rebel player can choose to disengage from the fuelling pod, however the number of energy counters it has when it disengages is the maximum energy level it can have from that point onwards.

Once the CR90 starts to move use the normal rules however energy is limited to the number of counters you had when you disengaged and you must spend 1 energy to move 1 or 2 and 2 energy to move 3 each turn.

So for example if you disengage the CR90 from the fuel with three energy counters that is your maximum energy for the remaining turns. You can spend 1 on moving and have two left to spend as normal, you regain energy from movement but can never have more than 3. 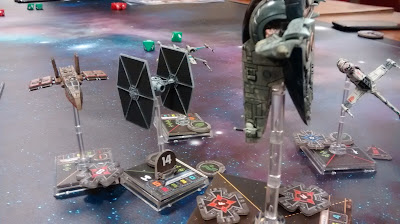 Rebel Victory -  The CR90 exits the table by the top table edge.
Imperial Victory - One section of the CR90 is crippled.
Draw - Any other result.

Tonight saw the Imperial ships concentrating "on mission" for once, the 2 Ties led by Jeff Vader (Darth's younger, less talented brother, the type of Jedi who would use his powers solely to levitate Chicken Pakora from plate to mouth) went straight for the fuel bowser with the usual 5 straight Imperial subtlety. The Firespray drove towards the Rebel ships to act as a missile magnet whilst the remaining Imperial ships were sent off on a flanking move.

An almighty scrap took place in the centre of the table with missiles and lasers firing everywhere however Jeff and his two bessie mates snook through and on turn 4 the fuel bowser blew. Fantastic result for the Imperials as the CR 90 had only just disengaged and the resulting damage roll hit the rear of it 3 times.

It wasn't such good news for the Tie Sqn Pilot who was flying next to the rear of the CR90 who blew up with the fuel container, Jeff only just survived being reduced to one hit point, it must have been the wet canteen tray which saved him ! (If that doesn't make sense google "Death Star Canteen").

The Firespray took the brunt of the Rebel fire and at one point had 4 target lock counters on it, it managed however to take out the rear section of the CR90 with its Heavy Laser Canon just before the Rebels took it out.

A good game for the Imperials who would have struggled without going all out on the mission, the Rebels managed to help themselves to 4 kills so didn't loose out completely. 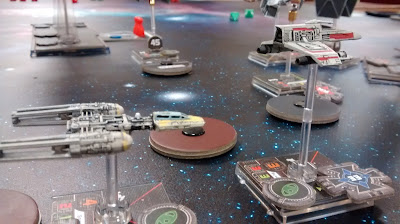 X Wing madness will return with game 23 on the 17th of February 2016. A mission which will see our Rebel Pilots attempting to rescue the Queen of a Rebel Sympathising Planet. Another rescue I hear the Rebels say, if you want to drift round the universe randomly blowing stuff up, join the Empire ! 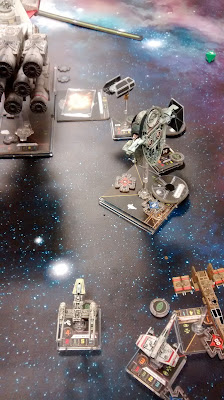 Jim head mechanic in the Rebel Garage has begun to relax as all the rebel ships returned home, a bit of polyfilla and a lick of paint and jobs done.

Pilot upgrades prior to start of game 22 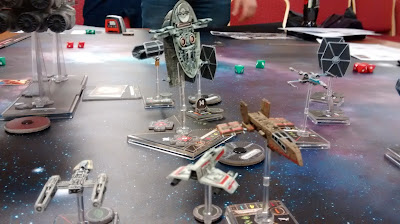