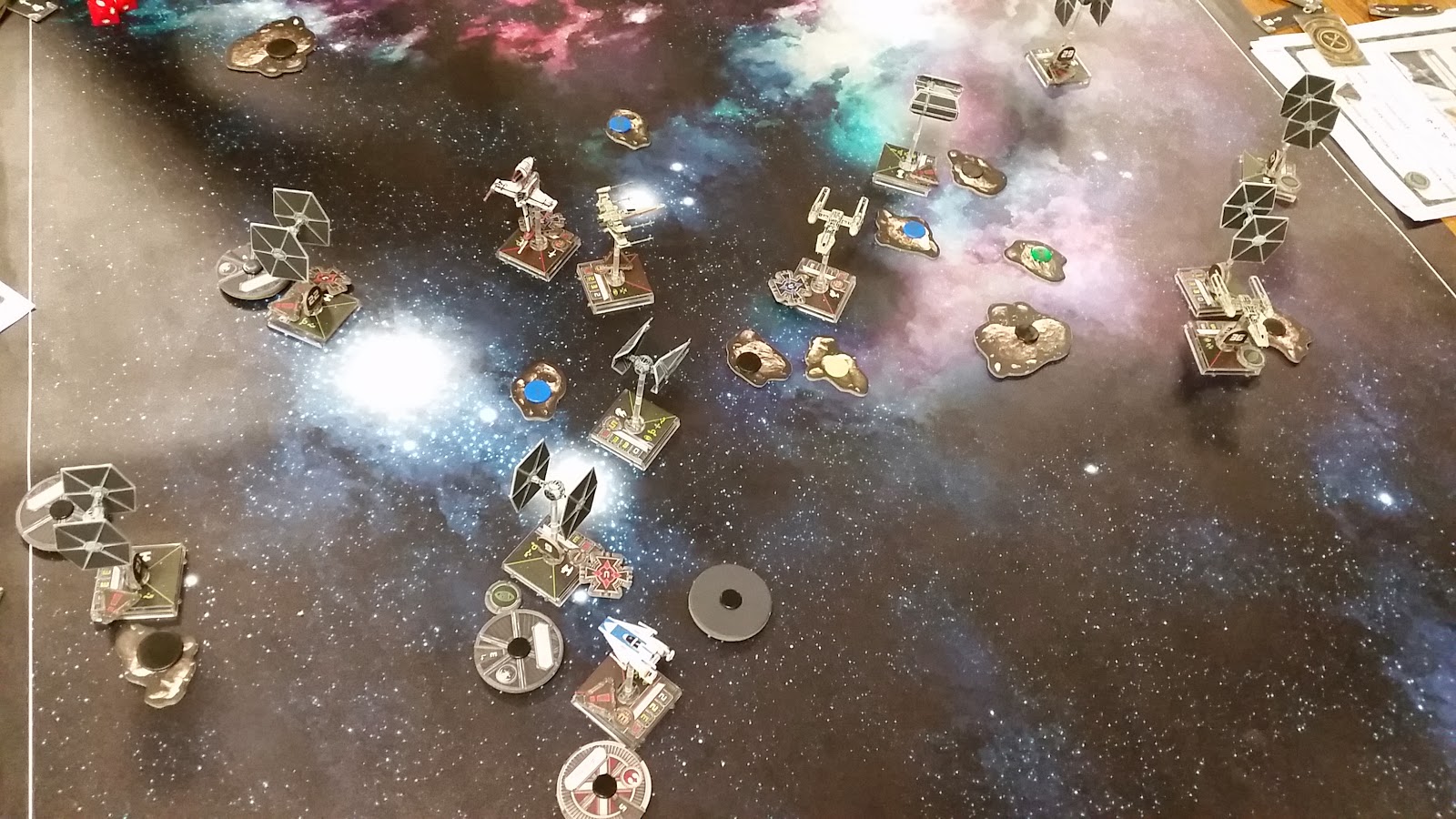 Rick O'Shea spent 5 GC on a hull upgrade and a Fire Control System.
Spike Sharpie had a shield upgrade and went up a level to pilot skill 3.
Captain Tangent in true Yarkshire stylee saved his brass
2 New Pilots both choose Y Wings

"Brave Rebel Pilots, the Empire have tested a new powerful weapon intended for a new class of "Death" ship, the system completely destroyed a moon in the Vega system when fired. We fortunately had a intel gathering device on the moon and long range scanners inform us that it is still active, jump into the area and engage any Imperial ships whilst our agents recover the device. Beware as there are many pieces of debris and unknown anomalies in the area" 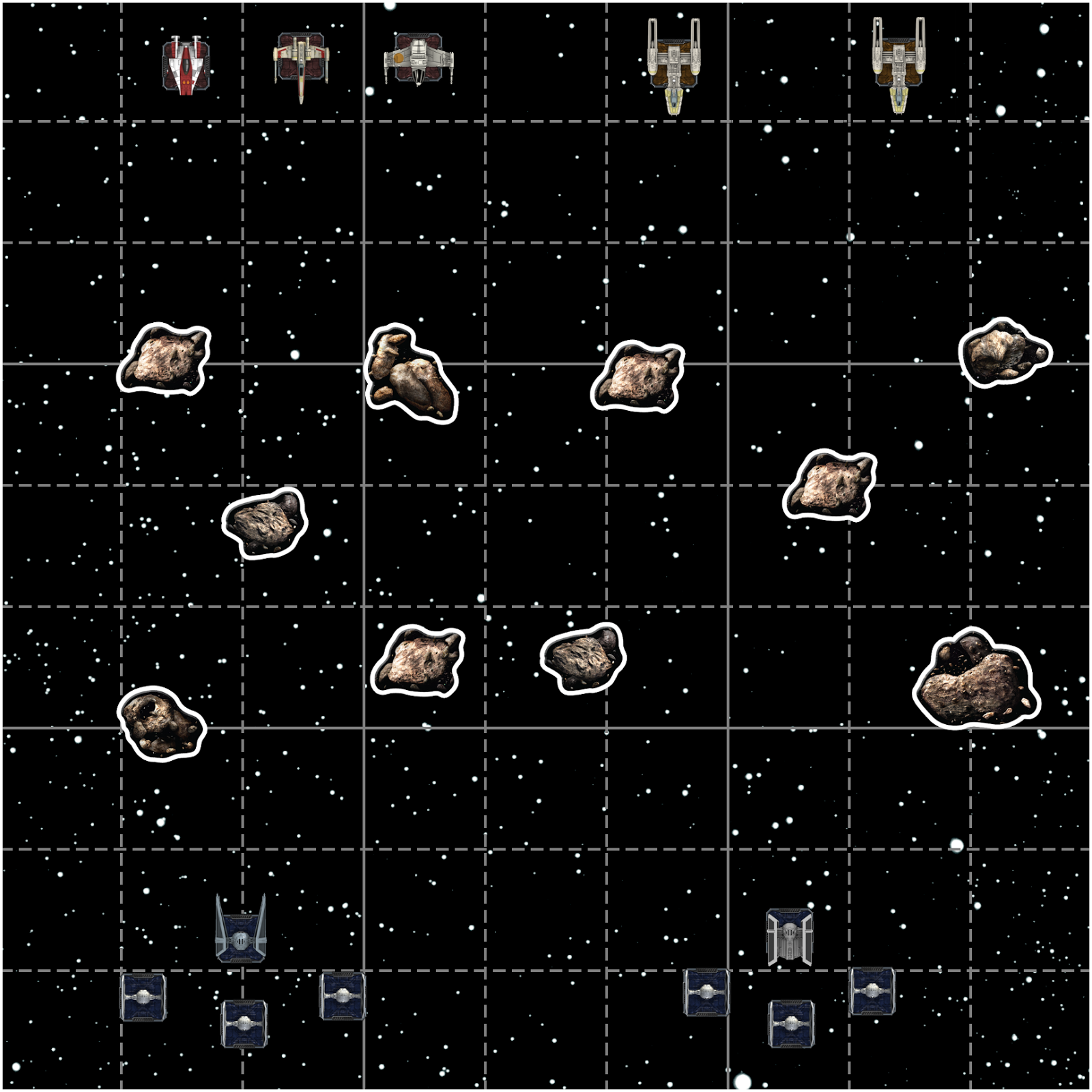 Empire ships are 6 Academy Level 1 Ties, a named Tie Interceptor selected at random (it was Lt Lorrir PS5) and Jeff Vader PS4 in his Tie Advanced, all set up range 1 from Empire base edge. Rebel ships start range 1 onto the board (standard 3 x 3). Place 10 Asteroids in the central 1/3 of the table evenly spread.

Asteroid Effects - At the start of the game roll 1 d12 for each asteroid which determines the game effects of that token, we marked ours with a different coloured counter (shown in brackets).

1-4 Standard Asteroid, as per normal game rules (small black)
5-6 Ion Storm, All combat through the asteroid is blocked, any ship which ends its turn on the counter gains an ionised counter (yellow)
7-8 Volatile Rock, as a normal asteroid but rolls 2 damage die (blue)
9-10 Gaseous Cloud, All combat is blocked through the asteroid, no other effect.
11-12 Gravity Well, any ship within range 1 at any time in its move, is pulled towards the asteroid on a roll of any hit on an attack die, depending on the ships attitude to the Well it will move 1 step different to the chosen dial move, any illegal moves for a ship type are performed and the ship gains a stress token.
E.g a ship moving towards the well at speed 3 will move at speed 4, away at 3 it will move 2. If it passed on the left of the Well on a straight 3 it will bank 3 left, a bank 3 left will become a 3 tight turns. Tight turning ships become ionised.

Magnetic Fields - The drifting debris are causing fluctuating magnetic fields effecting target locks, target locks are only effective if they roll a single attack die prior to firing and a hit is rolled. 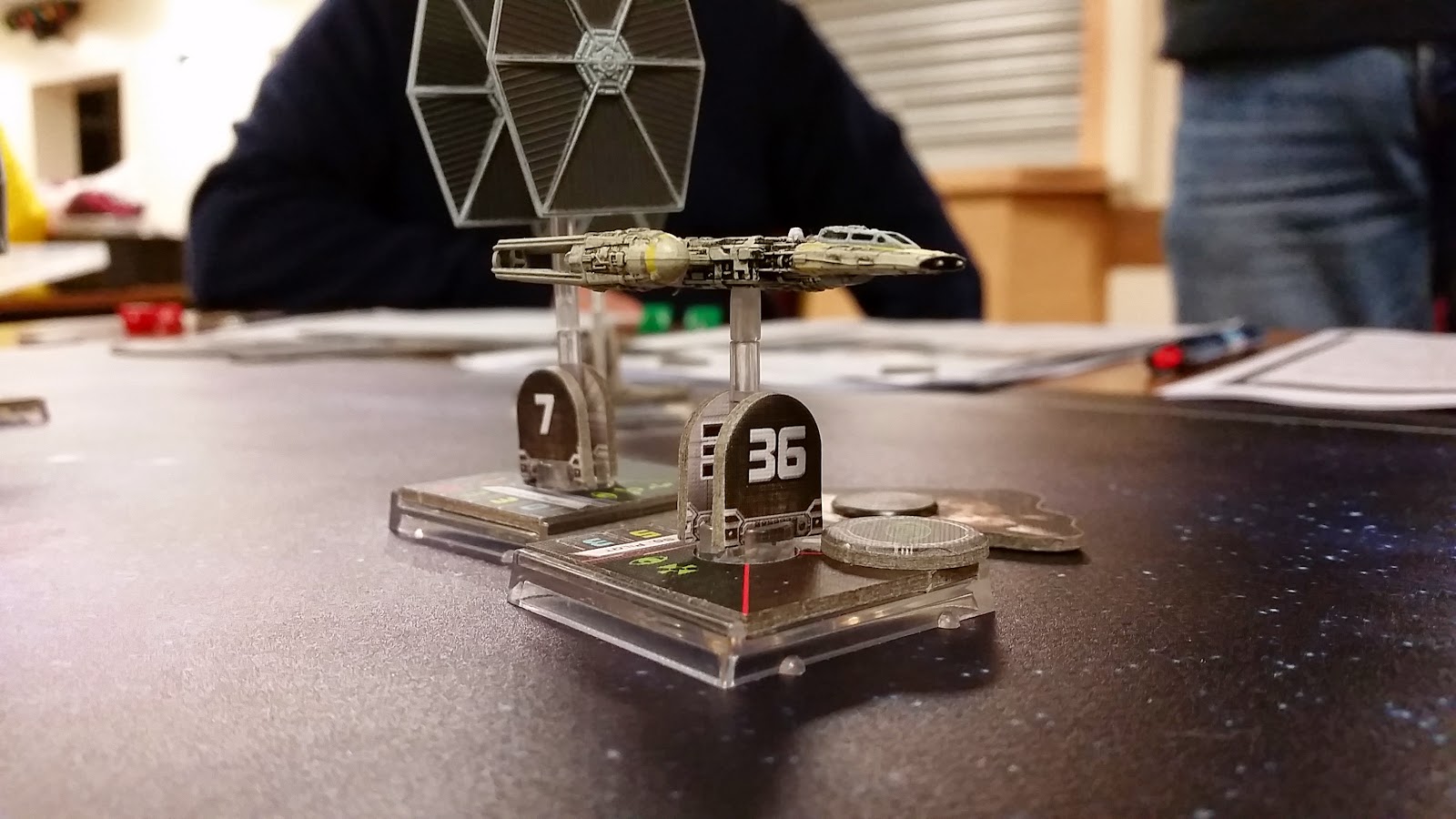 Rebel Victory - Destroy all Empire Fighters
Imperial Victory All Rebel Fighters destroyed or jumped.
Any other result is a draw.
Max 10 turns. 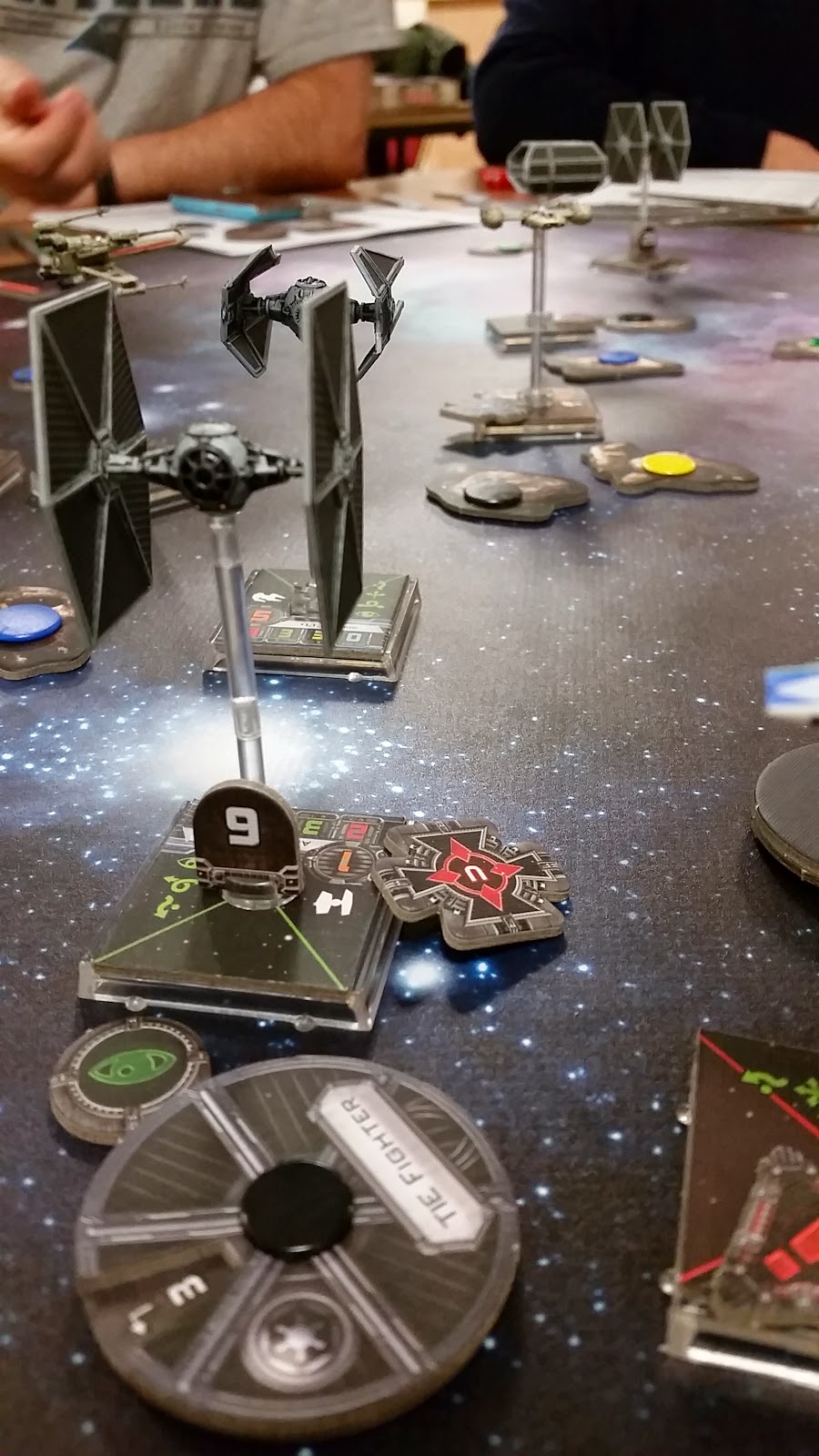 5 Rebel pilots took on the might of the Empire, Rick, Spike, The Captain and two Campaign virgins Rookie Pilots Crank Case and Oi M'Groin ( these names get worse !)

An easy victory for the Empire this time, it was a tall order for the Rebels to destroy the Imperials and they just couldn't hold out for the end of the game, taking survival over mission success after Tangent got cleaned up they jumped.

Jim head mechanic in the Rebel Garage was glad for a spot of work after two games with nowt to do. 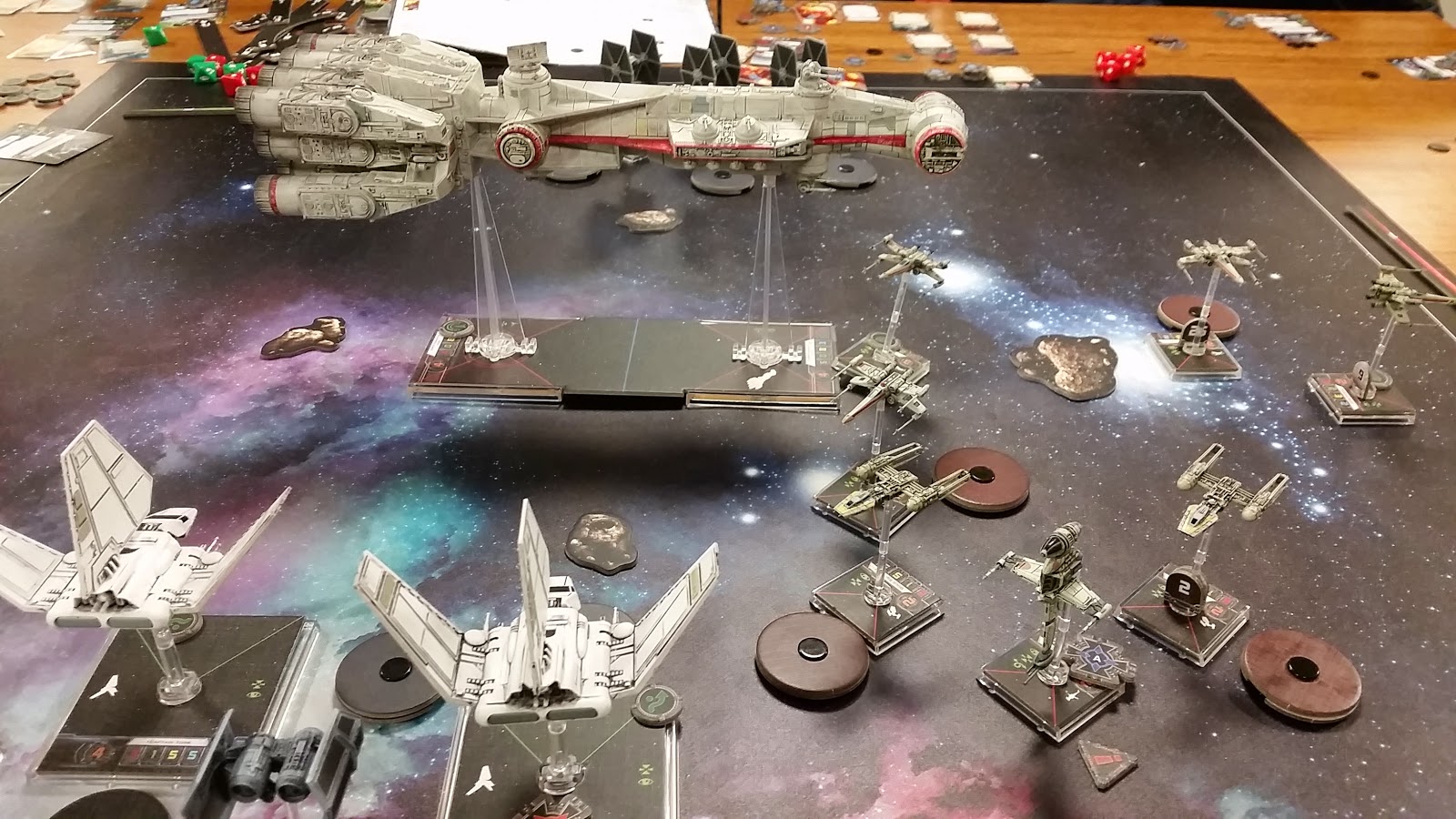 Rick O'Shea saved his brass.
Spike Sharpie after a Customs and Excise audit was found to owe the Galactic Bank 4 GC !
Captain Tangent was a no show.
Crank Case spent his single GC on a R2 Astromech.
Oi M'Groin spent his 2GC on a R10 Astromech (enabling him to jump one turn early, coward !)
We had 3 new pilots all chose X Wings

"Gentlemen, we have received a distress call from the CR 90 Triumph, It has lost engine power due to it striking a mine in the Xillow sector, we need you to jump in and protect the Triumph whilst it repairs its engines, look out for mines and may the force be with you" 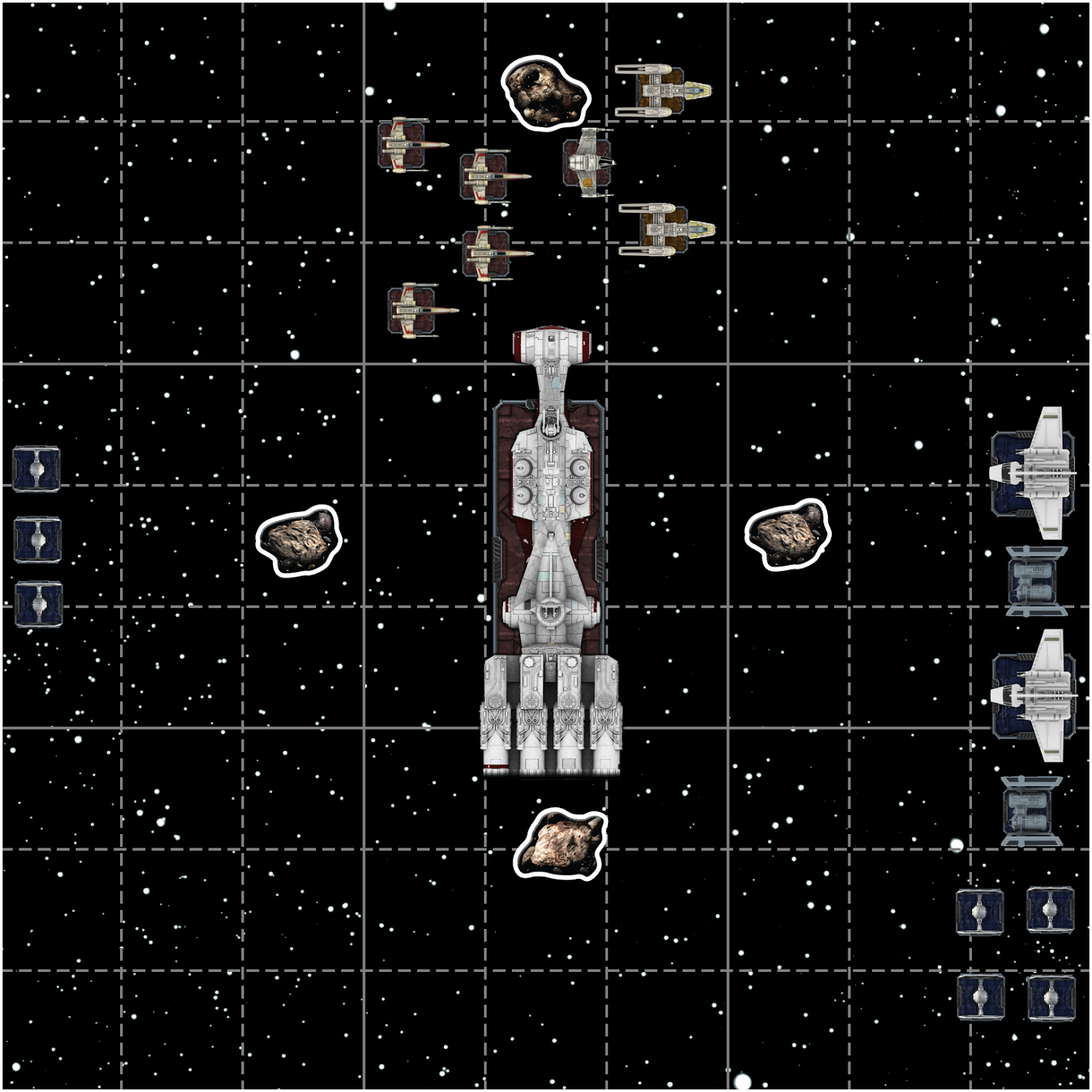 Empire ships are 5 Academy Level 1 Ties and a 2 x named Tie Pilot selected at random (it was Mauler Mithel PS 7 and Night Beast PS 5), plus 2 attack squadrons each with an Imperial Assault Gunboat and a Tie Bomber. The Imperial should have had extra ships see the how did we get on section. You should use 1 gunboat and 1 bomber per 3 rebel players.

Rebel ships start range 1 from the Triumph and roll d4 as above per group with 2 or 3 being Rebel table edge (standard 3 x 3).

Imperial Assault Gunboats - Stats as a Shuttle, use the same dial but no 0 move.

CR-90 - Due to its damage the ship doesn't move, however it gains 3 energy per turn. It can take 30 pts of upgrades, but none that effect movement (as it cant !) 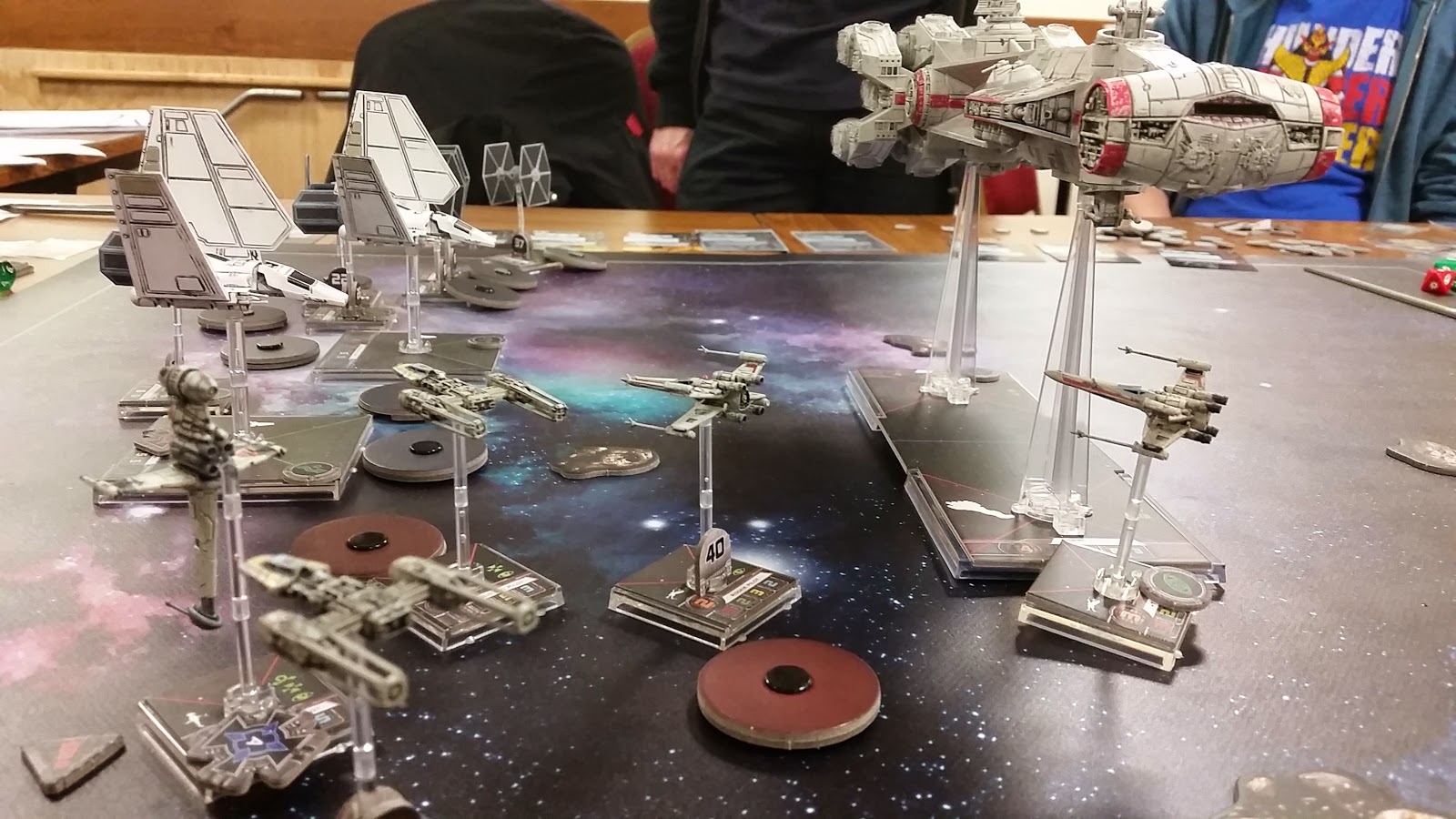 Well the campaign is getting a bit popular down t'club, we had 11 players last week !
Myself and Steve the stalwart Empire players drafted two new recruits to the dark (or correct) side.

7 Rebel pilots took on the might of the Empire, Rick, Spike, Crank, M'Groin and 3 Rookies

An easy victory for the rebels this time, as you can probably tell from the kills above. It all went a bit Pete Tong for two reasons, it looked a bit one sided towards the Empire at the start but I forgot to factor in that the assault squadrons could only fire at the CR90 thereby drastically reducing the firepower of the dark side. I therefore didn't add any special ships into the Empire fighter force so it turned into a bit of a turkey shoot for the Rebels (Empire should have had another 3 none Tie Ships).

Add to that we got the huge ship rules wrong, we started on the first turn by forgetting that the CR90 had an action per ship half and it nearly got shot down, then we gave it too many actions so that it became impossible to destroy. I'd be interested to see how others get on with this scenario, I think you would need at least 6 rebel players to get it to work as one assault sqn (Gunboat and Bomber) wouldn't be enough to have a chance against the CR90.

I have declared the match a draw due to the mistakes above.

Jim head mechanic in the Rebel Garage is advertising for an assistant mechanic !

And that's all for now folks, Game 8 tonight and then a break for Xmas